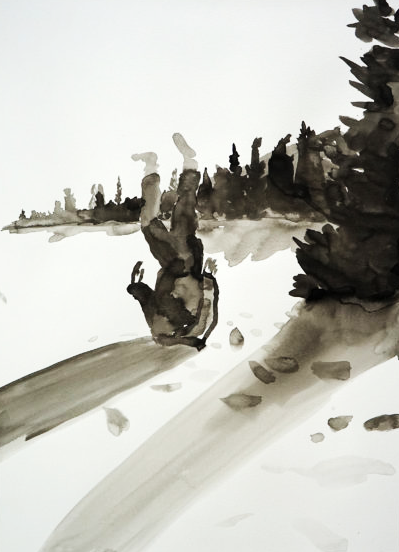 In Melville’s short story “Bartleby the Scrivener: A Story of Wall Street” Bartleby, a young, introverted young man, is hired by an attorney to copy law forms. Told from the lawyers perspective it is the story of how Bartleby disrupts the workflow with his odd, peculiar refusal to follow orders, using the phrase: “I would prefer not to,” a phrase both polite and calculated. Bartleby renders the attorney, his boss, speechless with his phrase. The mysterious refusal is a shock and a fascination, the boss feels pity, he is “disarmed”, “touched and disconcerted”. Bartleby withdraws becoming a silent presence. Deleuze describes Bartleby’s position like this: “He can survive only by whirling in a suspense that keeps everyone at a distance.” I want to imagine Bartleby as a painter and the act of painting as a polite refusal against the instrumentalization of labor and knowledge.

In a 1986 interview with art historian Kellie Jones, David Hammons said: “Artists have allowed themselves to be boxed in by saying “yes” all the time because they want to be seen, and they should be saying “no.”’ Hammons has his own “Story of Wall Street” when he sold snowballs on the streets of Manhattan arranging them on the street like a vendor. Freedom is gained in the “no” but always at the forfeiture of other things. There is less money in the “no.” “No” is counter intuitive; Bartleby suggests that it is mysterious and magical. He prefers an open-ended negation, like a child that will not eat.

Innate in the docile qualities of painting, runs a polite but intense “no.” As the religious sacrifice lays bear the flesh of the animal, taking away its usefulness as meat, painting takes away the usefulness of vision and casts it into a distant realm. The freedom gained in distance and uselessness aggravatingly forfeits the possibility of direct action. Clement Greenberg described the Avant-garde’s radical separation from the ruling class, yet still connected by an “umbilical cord of gold” that ties art to entrenched power. Money betrays the “no”; sold, it inflates, wins more wins for the winners.  On go the unresolvable tensions between capital and art.

But it is wrong to call Bartleby’s “no” a flat “no.” The refusal is specific and not total. What we never hear is Bartleby’s alternative vision; we merely get his preference against, a preference that hides an absolute inability to capitulate. We see the refusal drive the attorney into a frenzy. We know so little about Bartleby’s other qualities. He is submissive, certainly not antagonistic. The attorney discovers evidence of his meager diet and his sweet tooth (the ginger nut), a detail in tension with the mystery, otherworldly quality that surrounds Bartleby’s character. Bartleby is still just a silly person.

There is no suggestion in the story that Bartleby is a painter, or that while he stands dutifully behind his screen doing nothing he also paints (lost in one of his “dead wall reveries”). But we can imagine it without too much of a stretch. It is this paradoxical image of a person submissive and quiet, personless, yet disruptive and stubborn that makes me think this is a story about a painter.

Painting has for a longtime felt the need to suppress its own characteristics, including this problem of distance, becoming masochistic. Suppress the hand and the brush, representation and illusion, become only material, tear holes in the canvas, use logarithm to reveal a pure logic, anything to condemn the apathy of the medium. A certain embarrassment follows painters, the embarrassment of a practice of distance, the embarrassment of excusing yourself to go to the studio and whisper “no”. (Franz Kline said creating is having “the capacity to be embarrassed.”) Art is not about action, but about contemplation coming out of an action, that could motivate creative behavior from its audience. Did Bartleby change the Attorney? (“Ah Bartleby! Ah, humanity!”)

Paul Collin’s drawing gives us an image of self-embarrassment or self-criticism or self-emasculation. A person, head buried in the snow, feet up. Titled We Are All Stacked Wood. Paul turns everyone into headless objects. I would think it misanthropic if it wasn’t for Paul’s love of trees (he had a whole show of tree paintings at Zeitgeist in Nashville, TN called Soft Bark). But to be stacked wood is a sort of death. But it’s funny because we aren’t dead yet,only performing the universal beheading that death does, the way it inverts person and not person, tree and self.

It is because Bartleby never found his permissive, embodied, fecund creative act that he ultimately dies impoverished and malnourished (if I drew his death he would be upside down in the snow). Bartleby took only the first step towards being an artist, the empowering refusal, but we must find our “yes.” A “yes” I find through other artists, through their permissiveness and decadence I gain license, finding a way to say “yes” within a culture that I say “no” to more and more. Painting can excite creative possibility, giving us permission to make and another chance to avoid soul-crushing depression.

During an interview with Chris Martin, Richard Tuttle discussed the idea of artist’s granting other artists permission to make. “… [A] lot of garbage, a lot of lies […] stand in the way of permission. So if the artist opens those doors and gives the permission, it keeps the culture alive…” I want to be ever more permissive in my practice and my relationships- giving the individual confidence in their vision, even when it seems in tension with the popularity of a morally motivated social practice. The individual must say “yes” to something in their practice and always “no” to the things that offend its sense of freedom.

Painting can be a decadent, sexy practice that keeps the air charged, loosens me up, keeps the libido rushing.

Painters survive by “whirling in a suspense that keeps everyone at a distance,” a distance whose suppression has given birth to all types of restlessness, a distance this self-hatred has never been able to abolish. It is the power and frustration of painting that its forms never walk off the canvas, and the attempts to suture up the distance, the frame or stage or object, that fills the gap between art and life never quite eradicates the distance between action and audience.  Painting merely continues an old tradition of thinking and making, thinking and making, giving the stubborn individual a way to whirl, as together we refuse, searching for those all too rare yes’s.

Matt Christy is a multi-disciplinary artist, writer, editor and educator from Nashville, TN