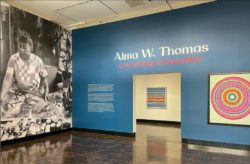 “Beauty will save the world.” Dostoevsky expresses this artist statement through the words of the fictional character, Prince Myshkin- the titular character of The Idiot, published in the late 1860s. Myshkin was, in some ways, a stand-in for what Dostoevsky might consider the best version of himself, a “positively good and beautiful man.” The prince was not what Dostoevsky claimed to be but possibly what he aspired to become.

Art abandoned such lofty goals over the next century so that beauty was shunned and considered antithetical to modern ideas. Thirty years ago, beauty had to be resurrected and defended by Dave Hickey’s Invisible Dragon. The defense stuck. That thing we had abandoned might be good for us after all. It is remarkable to see the word “beautiful” in the title of a museum exhibition within this context. Perhaps there is hope for us yet.

The Frist Museum’s career survey of Alma Thomas: Everything Is Beautiful gives us a guide for how beauty can save the world- study it, create it, and share it with the community. Those ideas filter through the other exhibitions on display in LeXander Bryant’s Forget-Me-Nots, selections from the Pérez Art Museum’s collection highlighting the Cuban diaspora and Nashville Art Teachers: Beyond the Classroom. These shows work together to remind the audience that art is not created in a vacuum, no matter how emotive or esoteric. The world creeps into the studio.

Everything Is Beautiful opens with a narrow gallery of paintings that are instantly recognizable as examples of Alma Thomas’s definitive style. Large paintings composed of her signature broad, vibrant, hatched brushstrokes lead us into the show. This arrangement serves two purposes. The first reason is to help the uninitiated know why they are here. If a museum-goer experienced Thomas’s career in chronological order, they would be waiting over 60 years before arriving at the work that built her reputation. The other reason is to remind us of Thomas’s generation’s unique place in human history- entering life during the “horse-and-buggy days” and exiting with humans having walked on the moon. The first gallery reflects Thomas’s fascination with flight, space travel, and orbiting Mars. It is a strong opening scene. Art that ponders the beauty of the cosmos- a tall order for a painter. These works give us the final destination before leading us to the second gallery, which rewinds the clock to show how Thomas got there.

Thomas famously hit her stride in her late 60s after retiring from over three decades as a junior high teacher. Much of her work from her professional, adult life is observational and competent. Painting might have been her passion, but she could not prioritize it. The exhibition features a few still lifes and landscapes from this period. Art that treads water more than it pushes forward. It was not until the 1950s, when she studied painting at American University, that she could work with other students that were not capturing what was in front of them but were, as Thomas puts it, “paint(ing) creatively.” Because of this trajectory, it makes sense that the exhibition features a painting from the 1920s next to a painting from the 1950s, and they do not look much different from one another.

Thomas’s development picked up pace in 1960 when she was 68 years old. Her abstractions from this year were still rooted in a subject, but they were starting to break free. She would respond to nature and the beauty surrounding her, but she would no longer try to represent it on canvas. With a saturated palette, her hatched strokes became musical expressions of how she experienced the world. Why try to capture nature as it is? It is an impossible task, a shadow version of the source. Instead, give the world something new, a new way to see dew on green grass, roses, or water. Thomas laid down pure shape, color, and rhythm. Marks were arranged in mosaic patterns of irregular rows, circles, and calligraphic marks traveling from one focal point to another. Her color theory for nature was relatively simple, rooted in complementary and analogous themes, but moments of complexity punctuated her career. Blast Off (1970), more than likely another “space” painting, contains the most sophisticated palette in the show- pitting a blue/orange complement against a muted set of grey primaries.

Breeze Rustling Through Fall Flowers (1968) arranges color in a Matissean manner, not surprising considering her reworking of Matisse’s Snail in her Watusi piece, which is not included but shown in a photograph. A still life from 1954 also suggests that she studied the entire career of the modernist master. Running through this work is evidence of a keen eye for editing and reshaping. Corrective marks of white paint cover pencil marks, lines of color and divide larger shapes into smaller ones to preserve the overall rhythm. Thomas’s paintings are possessed of a masterful ability to seem spontaneous but, upon closer inspection, reveal themselves to be rigorously analyzed and adjusted.

Everything Is Beautiful gives us one generous room of Thomas’s definitive work. It leaves the viewer wanting a fuller immersion into this period. The last two galleries remind us why we do not get to experience more. The exhibition returns to Thomas, the teacher. Drawings and photographs of student theatrical work are displayed with paintings and a sculpture created by her former students. It is a reminder that Thomas’s life was not solely devoted to the pursuit of beauty as a painter. It was a life well-lived in the classroom, educating and encouraging young minds. This work is followed by a gallery of artists that helped shape Thomas: inspirations such as Cezanne but coworkers and mentors as well. The final galleries illustrate the unbroken chain of culture through a community, passing knowledge and encouragement from one generation to the next.

The exhibition takes us through Thomas’s circles: family, faith, education, and work. The last room situates Thomas in the art scene where she lived- Washington D.C. Despite being 30 years older than the artists that make up the Washington Color School, painters like Gene Davis and Kenneth Noland were contemporaries of Thomas. Her involvement in the Barnett Aden Gallery, the country’s first privately-owned Black gallery in the country, aided the Color School artists in their early careers. They were happy to return the favor.

As the educational material for the show states, Alma Thomas maintained a “persistent search for beauty” throughout her life. She found it in gardens, stars, classrooms, and her city. None of this was accidental. If a person goes on a walk looking for footprints, they are guaranteed to find at least one set- their own. Thomas searched for beauty and found herself surrounded by it in no small part because she created it wherever she went. It is a lesson of Everything Is Beautiful that every visitor can take with them.