Art and Craft at the Metal Museum: Interview with the Metals Studio Staff

The mission of the Metal Museum is to preserve, promote, and advance the art and craft of fine metalwork, and one of the many ways we fulfill this mission is through our Metals Studio, which includes the Blacksmith’s Shop (or Smithy), the Foundry, and the Repairs and Restoration Lab. The Museum’s staff of trained metalsmiths regularly leads demonstrations and classes for the public in addition to working on commissions and repairs. This interview with the Metals Studio staff explores their backgrounds, how they identify as people who create, and their individual opinions on art and craft.

What are your backgrounds in metalsmithing?

James Vanderpool, Foundry Operations Manager: I did painting, drawing, and ceramics all through high school in Lexington, Kentucky. I remember one time the University of Kentucky (UK) brought a mobile foundry to my school. That experience stuck with me when I went to college at UK.  I was originally an architecture major, but my advisor told me to take a class I actually wanted to take, so I found my way to the art building and got lost. I got my BFA from UK and went to Georgia State University for my MFA to work with George Beasley. That program taught me a lot about foundry work and furnace operation. Outside of schools, the foundry community itself has taught me a lot; we’re very open about our processes, especially because it takes a lot of people to make our work. We build bulky, heavy things, and a lot of times you need a buddy to help!

Jim Masterson, Lead Designer & Shop Foreman: I was an engineering student and took a blacksmithing class in 1985 to fulfill an art requirement. I got my BFA in Metals with a minor in Blacksmithing and Sculpture at SIU Edwardsville. I went on to get my MFA in Metals at Miami University in Ohio.

Katelyn Butler, Repair & Restoration Specialist: For me, it was completely by accident. I took a class and fell in love with it. I think I was looking for an easy class, and I said, “Oh jewelry-making, that’s cute!” For my undergrad, I ended up working with Sarah Perkins at Missouri State University, and I did a year of graduate study at SIU Edwardsville. I also did a 2-month residency in Taiwan, which was a great way to learn a different style of work.

Kevin Burge, Preparator (former Repair & Restoration Specialist): I was a computer information systems major in undergrad at Missouri State, and then I switched to computer animation after taking a drawing class, where the professor got angry at me because I wasn’t an art major. And I thought, “Well, maybe I can do both.” I took my first metals class as a gen-ed requirement for the art major because I was always into cars. I enjoyed the class much more than my major at the time, so I switched to metals.

How did you come to work at the Metal Museum?

Vanderpool: I would have been daunted to apply for this job. I’d never even been to the Metal Museum before. But one day, within five minutes, I got three emails with the job posting from three separate people in three different states. That was way too weird to not look into the Museum and the position.  The job was about teaching, doing commission work, and working for a nonprofit, and I had experience in all those areas.

Burge: I was taking my second metals class, and a group was coming to the Metal Museum to volunteer for Repair Days. I think that first year I did 2 repairs! After that, I started to do repairs for friends during open studio time. In my senior year, I wanted to skip volunteering at Repair Days to work on my senior show, but Sarah Perkins, my undergraduate metals professor, had heard that the Museum was possibly hiring someone for the Repair Lab. The hardest part of my application was cornering Wally during Repair Days to ask about the job!

Masterson: After working for shops in the Midwest for a few years, I moved to California for a teaching and studio management role. I applied for this job in 1999, and I’ve been working for the Museum full-time for twenty years now.

Jim Masterson and Elizabeth Belz bending steel in the fly press for a 2018 commission by the Mississippi Museum of Art. Photo courtesy of the Metal Museum.

Do you consider yourselves craftspeople, artists, or artisans? Do you identity more with your specialties, like metalsmith, blacksmith, or founder? Or is it a combination? Or none?

Cassi Rebman, Foundry Apprentice: I consider myself to be an artist. While process is enjoyable, it’s all just a means to an end. It’s the product that interests me. The frivolity of what I make is what excites me. It’s a very ne’er-do-well, mischievous mentality. I made this useless piece of crap, but it serves a function for its thought value, which isn’t valued a lot socially or monetarily.

Masterson: I would say I identify with all those terms.

Reed Peck-Kriss, Blacksmithing Apprentice: I would say none of them. If someone asks me what I do for a living, I would say I’m a blacksmith. But A) most people don’t know what that means, and B) I have equal interest in architectural ironwork and sculpture. So, it’s hard to decide on just one.

Elizabeth Belz, Blacksmithing Apprentice: I would say all the hats too.

Jeannie Tomlinson Saltmarsh, Metals Shop Coordinator & Foundry Technician: I guess the new term is a “maker.” I make and I’m a maker, and my processes include foundry and blacksmithing.

Burge: I like the term “craftsman” because my work tends to be technique-based. I’m about tools, process, and how things work together. But I usually use the generic term “metalsmith,” since I don’t limit myself to working with one material. I work in silver, bronze, and copper mostly, but I’ll use nickel, stainless steel, and steel, whatever works for what I need it to do.

Butler: These labels are sometimes a good way to pigeon-hole what you’re doing. I think it also boils down to intent – do you want to make something to sell to consumers? Production work is more aligned with craftspeople, while art, to me, is almost something you’re unsure if you can sell. If I had to choose a term, it would be “maker” because it relates to the need I have to create things. 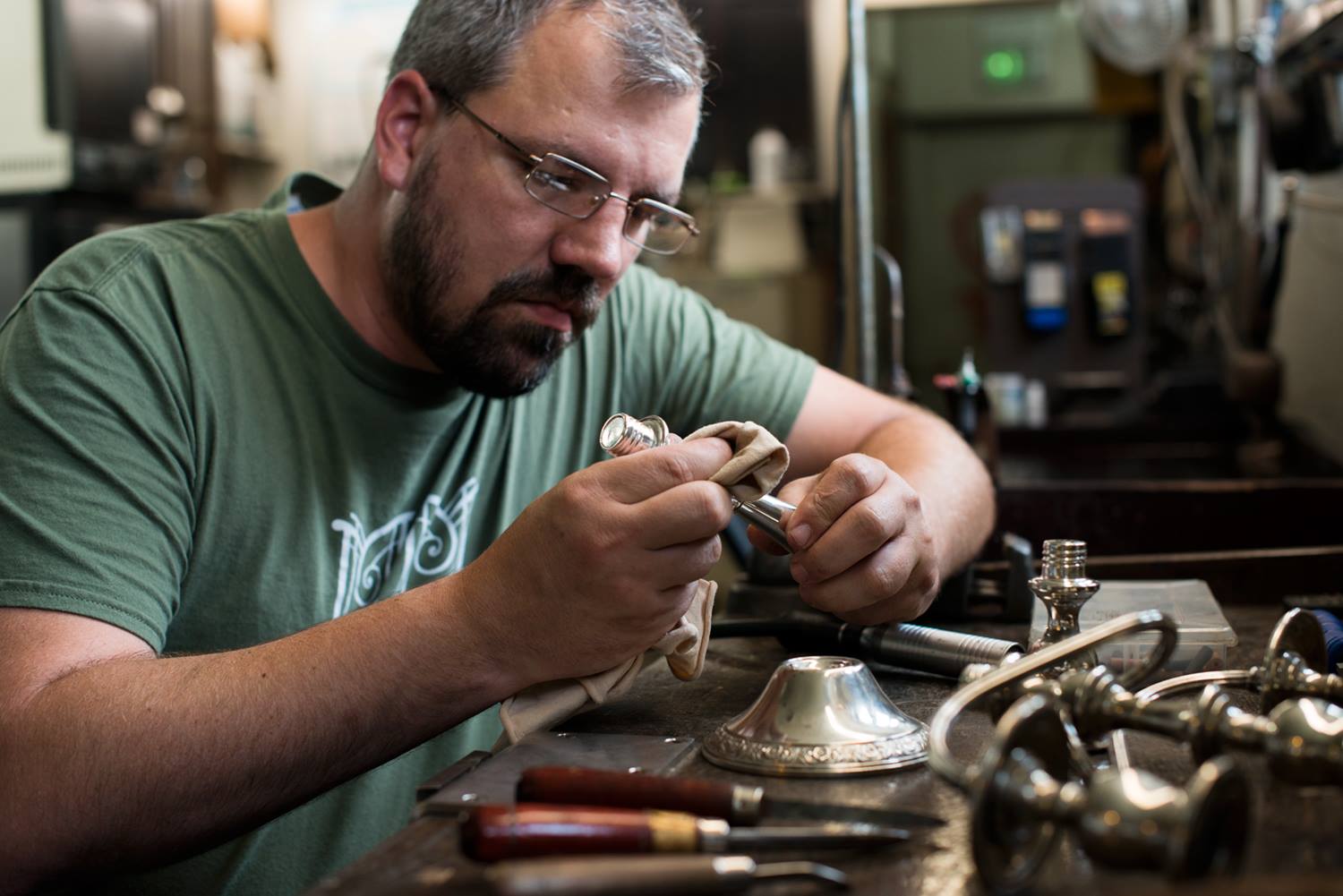 Kevin Burge polishing a disassembled silver candlestick he repaired for a client. Photo courtesy of the Metal Museum.

What does the idea of art vs. craft mean to you? Is there a distinction?

Rebman: An instructor told me once that art is craft, but craft isn’t always art. There’s got to be a philosophy behind it. You can buy a nice painting at Target but does that make it art?

Vanderpool: The talk between art and craft is something that they beat into you in art school. They tell you if its art, its sole purpose should be to be art. Craft sometimes gets a negative connotation thrown on it.

Rebman: We’re not trying to put any qualitative evaluation on whether one is better than the other. They both just are. They’re just different.

Tomlinson Saltmarsh: What Judy Wallace said years ago was that art was signed on the front, and craft is signed on the back or somewhere you won’t ever find the signature. That made me think craftspeople are humbler because they are not scrawling their name across the front of what they made. And artists have a message they are trying to convey, and they want you to know it’s their voice you’re listening to.

Masterson: All crafts movements and artistic movements have happened at the same time, whether it’s Cubism, Modernism, Bauhaus, etc.; they are both influenced by the same thing. To me, a craftsperson will spend more time on getting everything perfect. Whereas an artist is there to convey ideas. But art and craft go hand in hand, they shouldn’t be separated.

Peek-Kriss: The fullness of the separation between art and craft is false, but it’s not a distinction without a difference. I don’t know that it’s necessarily a matter of specificity of design. There are plenty of artists who are aggressively and infamously very specific about the objects they’re creating, especially in terms of process. And there are craftspeople that are not!

Burge: To me, the distinction between art and craft doesn’t mean a whole lot, but it goes back to how I define them. Art: are you concept-based? Craft: are you process- or function-based? Most people go back and forth; it is whichever term works for whatever you’re doing at the time.

Butler: I think of art as more of a conversation, something that can really make people uncomfortable. Art helps people to think freely; art is a dialog. Craft is more utilitarian; it meets your needs or you’re selling something to meet the needs of others.

Brooke Garcia is Collections Manager and Registrar at Metal Museum in Memphis, TN.