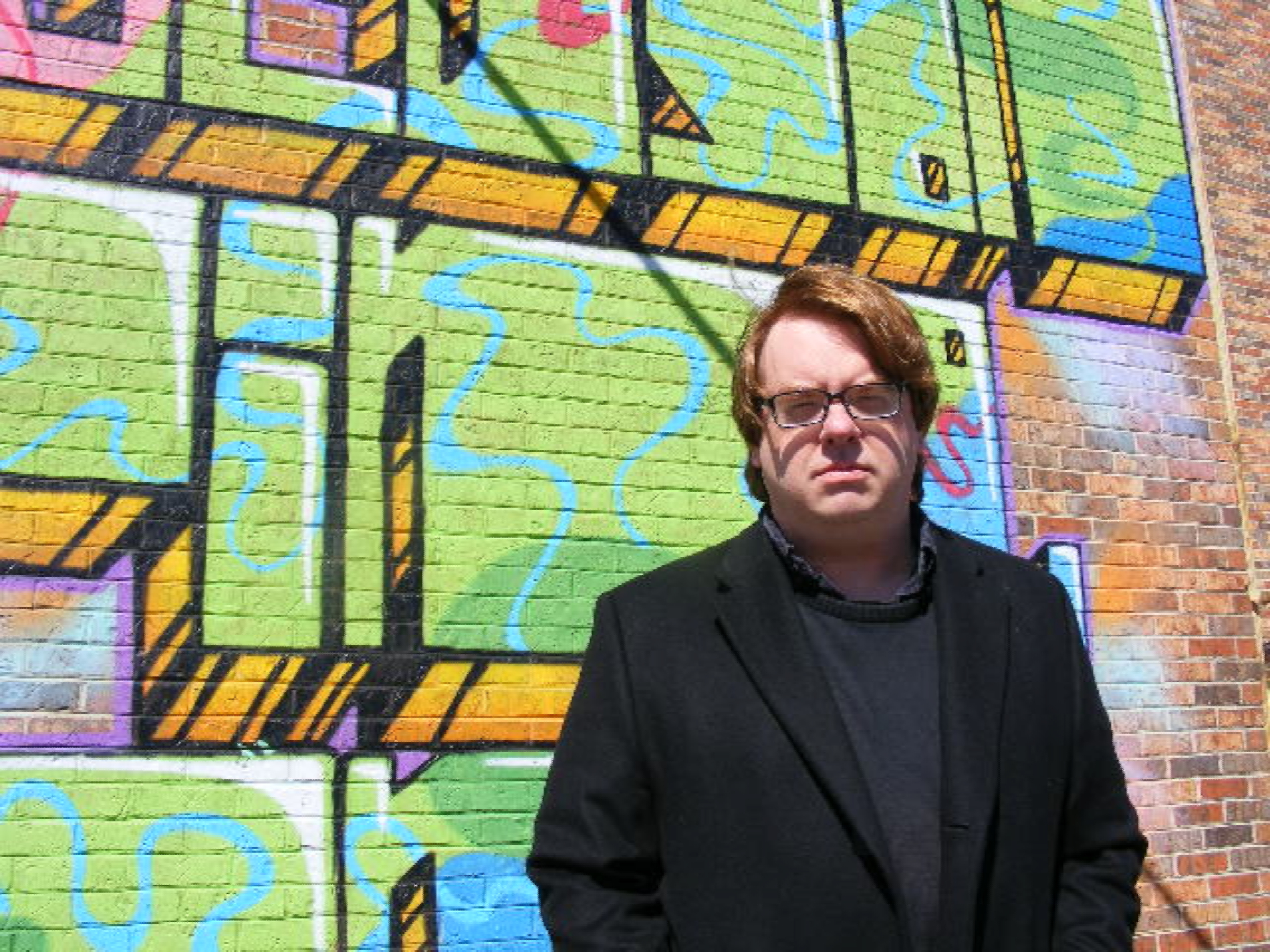 Dr. Scott Contreras-Koterbay is an Associate Professor of Art History at East Tennessee State University (ETSU) in Johnson City, TN. He is guest editor of the November 2014 issue of Number: Inc. magazine. I sat down with him at his home in the historic “tree streets” area near the university to learn more about him and his perspective on art, with a particular focus on the central topic of the forthcoming issue, Number:80 Art as Community Builder.

Scott, before we get into a discussion about art, tell us a little about yourself.

I came to ETSU in 1998, after getting my PhD at the University of St. Andrews in Scotland that same year. Since then I have been teaching, writing, and publishing articles as a member of the faculty of the Department of Art and Design. I am also an adjunct in the Department of Philosophy and Humanities. My primary areas of research are focused on two themes: the question of “what is art?” and the nature of creativity and artistic identity.

So, how did you develop your interest in art?

I have had an interest in art for a very long time . . . since grade school, in fact. I went to Catholic schools and was taught by nuns, who believed in a well-rounded education. I have known lots of people who are creative, who are artists. I’m not as creative as they are, but they got me thinking about the fundamentals of art and the creative act.

My research interests have developed over time. I did my PhD dissertation on Søren Kierkegaard. Since then my interest has expanded to the French psychoanalyst Jacques Lacan, who was greatly attracted to surrealism and associated with artists such as Salvador Dali and Pablo Picasso. In their work, both Kierkegaard and Lacan explore what it means to be a person, to be an individual. And that is all wrapped up in the question of what it means to be a creator, an artist.

Now to the topic of the November issue of Number — art as community builder. What does that mean to you?

For me, art as a community builder focuses on the idea that art objects will not only enrich the experience of individuals, but that they will facilitate and strengthen the relationships between people and the foundations of their community. I believe that art more than strengthens the community; it is one of the foundations of a community –helping a community to grow, develop, and mature. An especially interesting part of art as community builder is the issue of “rightness.” Not quite the moral or ethical value of the art, but rather the question of whether art should just serve the community or work to undermine it’s expectations, challenge it to grow and stretch. And if that’s the case, then, in fact, you do have moral and ethical issues.

Can you give us some examples of how art has helped to build communities?

A: Maya Lin’s Vietnam War Memorial in Washington, DC, is a great example. When her design was chosen, it caused a great deal of controversy. The community that was the target of this design was not really her intended audience. Vietnam War veterans were considered the primary audience, and they considered themselves so. But Lin undermined those expectations. Her design for the memorial upset the veterans groups, and so was first perceived as failing its target audience. But in fact Maya Lin expanded the originally intended audience to a much broader community.

So, that begs the question of whether the memorial was really for the veterans of the Vietnam War, or if Maya Lin intended all along for the memorial to be directed at a broader audience?

Originally, the money for the Vietnam War Memorial was raised by veterans groups, so they certainly considered themselves the primary audience. And they were quite upset by the idea of an abstract wall. Many people wanted a big life-like bronze statue. But in the end, the memorial proved to be a huge success. The physical layout of the wall and its placement in the landscape literally drew people in. And the highly polished black granite surface reflected people back to themselves, allowing them to become part of the memorializing process.

Northeast Tennessee sits in the heart of Appalachia. This area is known for crafts such as pottery and quilting, and as the birthplace of old time country music. What place do the visual arts have in this region?

There was not a strong visual “fine arts” tradition woven into Southern Appalachian culture, though there always was interesting visual art. In this region the fine arts were ancillary to craft and music. But I see this changing, much for the better. Since 1998, when I first came here, I think the region has become less isolated than it once was; I see it evolving and the “fine arts” are becoming a greater part of the cultural narrative.

As an artist myself, I know that some artists in the region feel that it’s very difficult to be “seen” by the community, to have their work acknowledged. What do you think?

I can see how some artists might feel that they’re banging their heads against the wall. In some ways, they are! In some areas, such as Memphis, where Number: Inc magazine originates, there is a stronger tradition of visual arts. In other areas, there is not a strong visual arts tradition. I think artists can approach this challenge, or at least understand it, in two ways. They can create art that meets people’s expectations. Or they can work in isolation.

Part of building a community is educating that community. Many artists live in a region, but they aren’t “of the community.” Their primary audiences are elsewhere, in other parts of the US or abroad. Let me give you two examples of artists who live in northeast Tennessee. Beth Crawford, who paints large figurative murals, is extremely well received and known in the Netherlands, but most people here have never heard of her. Likewise Brian Saunders, who lives and works in Johnson City, is very well known and his work exhibited throughout Israel, France, England, and other countries. But he is totally unknown here. Yet from an international art perspective, he’s one of the most famous artists living in northeast Tennessee.

Do you see a difference in how the arts serve as community builders in cities versus in rural areas?

I think that in places such as Memphis and Atlanta the visual arts work better. In some ways this comes down to very practical considerations. In urban areas, there is a greater concentration of people and there is better public transportation. Consequently, it’s easier for people to get to the art. Music, by contrast, is a travelling art form. It brings the art form to the audience. In areas such as rural Appalachia, which in the past has been physically isolated and difficult to access, music has been a very successful art form because musicians could take their music from place to place, into even the most remote communities. That still holds true today.

But a visual artist can’t really throw his or her work into a car and drive it around! So the visual arts have had less impact on these more rural, less accessible communities. But as I said earlier, I believe that’s changing now. Travel is easier, information flows through more channels, making art more accessible now than ever before.

Any last thoughts on the subject of art as community builder?

So, I ask, is art a facilitator of growth, progress, and maturity in society? Absolutely. But you can’t speak about art as a community builder without having an understanding of its capabilities and the limits on those capabilities.

Number: Inc is focused on the visual arts, but the idea of art as a community builder is broader than the visual arts, it encompasses all the arts and it focuses a light on those capabilities and limits. As the world grows more interconnected, the visual arts become a challenge to more communities; artists challenge the community to accept or reject their work. The visual arts in Appalachia are an excellent example of this. Many artists invest a great deal of personal energy into what they are doing, and they think that everyone should love what they do. But that just isn’t so. A community may not have the cultural foundations to appreciate their work. This is where educating the community comes in.

Is that a short-term or long-term challenge?

I think in the short term it will be difficult for artists. But I’m more optimistic for the long-term success and acceptance of varied art forms, particularly the visual arts. I think that certain art forms are more applicable in certain communities. Art is one of the foundations of a community, but different communities bring out different art forms. In Appalachia, visual arts are not as native an art form as music. But I believe that as the world grows smaller, communities will increasingly adopt an interdisciplinary approach.

I want to finish by saying that I have really enjoyed working with Number: magazine over the years, and I’m looking forward to guest editing this November issue. It’s an important topic that needs to be explored more fully.

Theresa Markiw has been a visual artist for over thirty years. She lives in northeast Tennessee and paints full time, while engaging with local and regional arts communities in the area.