Suspending the Story to Tell the Story 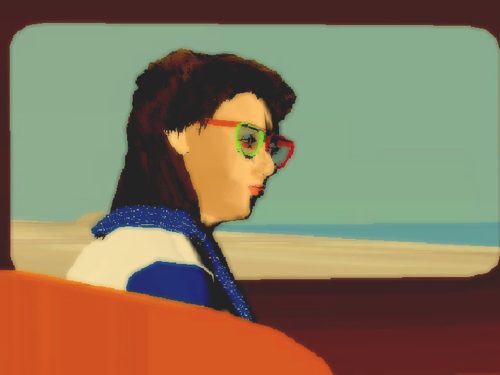 Ponytail is the moment laughter turns into tortured dry heaving.

Ponytail is the Toa Te Ching mixed with vodka and spritzer.

Ponytail is an oversized baby that babbles in animal calls and Zen koans.

Ponytail is airport boredom. Flounder flavored toothpaste. Acupuncture tit. Burst bubbles. I could go on trying to find the right disjoinery to help describe this unexplainable film, but I won’t.

Ponytail is Barry Doupé’s first full-length computer generated animation and was recently shown in Nashville in tandem with an exhibition of framed video-stills and video-works at Mild Climate.

Made in 2008, the animation Doupé uses is by now probably antiquated. If you ever played Goldeneye on Nintendo 64 back in 1998 then you know the type: glitchy, pixely, plastic, geometrically built simulations with rubber band arms moving with robotic stiffness, their faces stubbornly refusing to show emotion, giving everyone a startled psychotic look. The loose narrative follows a group of forlorn characters through disjointed scenes of existential angst as they ponder their relationships, their desires, the nature of their digital reality.

The characters speak an uninflected German in clinical voices. Talking to each other in circular logic, cheap puns, and perverse rhymes. “Running water, what are you running from?” Doupé uses the animated world, with all its oddities to suspend our expectations of narrative logic and causal connection. The physics of the cgi reinforce this and have an ironic self-awareness. A cigarette falls from Stephanie’s mouth as she nods off to sleep only to land by the hot end oddly erect on her collarbone. She expresses her desire to touch and be touched. Then her head splits down the middle.

Doupé exploits to hilarious ends what this cgi animation does badly. When the pig-faced boy named Paul with the sunglasses dances without pants, his penis shaking in the wind, (his ass shit-stained or at least really dirty) and knocks his glasses to the ground, he immediately drops to pat at the grass and dirt trying to find them. There is something meta and hilarious about watching this digital puppet whose wooden movements make it difficult for him to look for his broken sunglasses.

Rebecca, whose head looks like it’s been through a blender, her hair in tattered patches, complains to her friend Stephanie that her hair is falling out. (Hair seems to be particularly difficult for the animation to render.) Stephanie suggests it might be falling out because she is washing it too much or because, “you pull your hair out when you’re not having enough sex.”

Throughout the film the characters are humiliated in a show of funny, sexual longing. In a locker room a sim kneels at a commode and drags his oversized red tongue along the rim of the toilet seat. The scratchy sound like sand paper. Three baffled boys stand and watch. Finally he turns and in a stutter, his limp tongue still hanging out of his mouth, says, “Ccccccan’t ggget cccan’t get up. “ Clear enough. Then he explains himself, “Because I’m ssstuck on chewing gum.” Later this same character appears, head in a stock, tongue lagging, dripping a viscous black liquid, his thin little penis grows like a garden hose zig-zagging along the ground, and his ass sags like dripping taffy.

Doupé uses different techniques to delay the comfy approach of reason. Every scene is a surprise, a demented child’s play thing or an old perverted philosopher’s final stance against the knowability of a dense opaque reality. Ponytail doesn’t let a concern for narrative logic or casual connection stop it from doing things, telling stories, repeating words, producing images. But what at first appears arbitrary and disconnected starts to take on cumulative coherence as the film returns to previous scenes and familiar characters.

Ponytail is unfettered and unapologetic. It feels like Doupé discovered a way of making that could move in multiple directions at once. It feels like he could incorporate spontaneous whims into the structure of the film and still maintain the obscure movement of the plot. I don’t want to give the impression Ponytail isn’t focused and consistent, it is, but putting your finger on the logic of this absurd train-wreck is difficult, and that’s what makes it so good. I may have missed some of the resolution that individual characters achieve in the film, the purpose of certain reoccurring images (a red telephone, an old cassette tape) and I haven’t even mentioned the mcguffin that seems to drive the film, the disappearance of Jennifer. There is a narrative here, but it functions as a loose envelop for the power of rupture the film provides and the creation of an ominous atmosphere, a universe, that answers only to its own reasons.