The exhibition at The University of Mississippi Museum in Oxford will run September 13, 2016 through January 14, 2017. 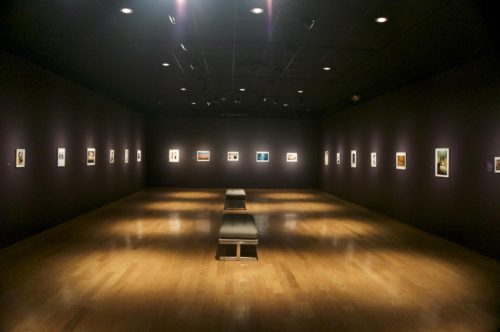 William Eggleston’s use of deeply saturated color and seemingly mundane subject matter may have caused some controversy at the photographer’s premiere exhibition at the Museum of Modern Art in 1976, but today Eggleston is widely considered one of our greatest living photographers. A collection of thirty-six of the Sumner, Mississippi native and current Memphis resident’s beautiful color prints, as well as several rarely seen black-and-white images, are now on view at The University of Mississippi Museum through January, 2017.

The Beautiful Mysterious spans over two decades of Eggleston’s work. Included are some of the artist’s more iconic images as well as several lesser-known photographs, all from the collection of Eggleston’s longtime friend, Bill Ferris. Ferris, who was the founding director of the Center for the Study of Southern Culture, has referred to Eggleston as “the Picasso or Faulkner of what he does.”

Upon entering the exhibition space, museumgoers are transported to another world. The photographs, which capture the sometimes moody and enigmatic atmosphere of Eggleston’s world, are enhanced by the deep eggplant-colored gallery walls that complement the rich ambers, rusty reds, and the pops of turquoise in the artist’s images. This other-worldly ambience aligns with Edgar Award winning novelist, and curator of The Beautiful Mysterious, Megan Abbott’s impression of Eggleston’s images, “[w]hen you look long enough at his photographs, like the gorgeous, lonely blue parking lot chosen as one of the exhibit’s central images, you get lost in it. You’re in another place.”

That “place” can inspire a sense of “romantic loneliness,” as Abbott describes it. People are rarely seen in these thirty-six images. When the human form is present, it is often detached; eye contact or recognition of the camera is almost never present. A young man looks despondently out of the frame of one photograph as he eats alone at the counter of a fast-food restaurant. A grocery store clerk loads paper bags into the backseat of an automobile, his eyes are cut off by the car’s roof, leaving his full face teasingly out of view.

The exhibition is introduced with words by Megan Abbott, in which she details Eggleston’s ability to make our own world mysterious through his use of color and composition. Abbott suggests more than Eggleston’s innovative use of color, it is his work’s ability to be felt and experienced that makes it exceptional, “he drops us in the middle, or near a shuddering climax, or in the chilly moments after.”

While I enthusiastically agree with Abbott’s introductory remarks, this exhibition is more than just one pre- or post-climactic moment after the next. Depictions of dramatic tension or melancholy are mitigated by natural scenes where honey-colored sunlight bathes an autumn tree with an almost palpable warmth. Museumgoers will also encounter the imprinted remnants of traumatic climax through Eggleston’s landscape photographs, where rural architecture sits long forgotten, skeletal in the aftermath of fire or decay. As many have noted of Eggleston’s photography, it is not human interaction that conveys much of his work’s sentiment, but it is the material objects with which humans interact and their inevitable mark on the landscape that tell the stories of Eggleston’s world.

Eggleston’s architectural depictions are particularly stunning. The artist’s camera details the vertical and horizontal intersecting wood slabs of worn Southern buildings, and the faded, hand-painted signs and religious iconography that adorn them. The exhibition also includes images commissioned by Ray Stark, producer of the film Annie (1982), who asked several photographers to film as they pleased on the set, which was located at Monmouth College in Illinois. Eggleston’s shots focus on lavish interior architectural adornment, resulting in a beautifully haunting series of photographs.

Several black-and-white images are dispersed throughout the collection, all from the early to mid 60s, before Eggleston fully realized the possibilities of color photography. While these prints do not carry quite the same emotional weight as those in color, they do highlight Eggleston’s early ability to capture line and depth. Through a monochrome palette, the artist portrays an empty gas station or a diner at night with inventive composition and framing—skills which have likened him to photographers like Walker Evans and Henri Cartier-Bresson.

Not only is this exhibition unique in its scope of Eggleston’s styles and subject matter, it is also interpreted through the voice of his first cousin and protégé, Maude Schuyler Clay. Clay, an accomplished artist and author of several acclaimed books of photography including the recently published Mississippi History, offers particular insight to the locations and people throughout the exhibit. Clay’s commentary presents a more personal understanding of Eggleston’s photographs.

Long-time lovers of Eggleston and those new to his work will find in The Beautiful Mysterious a rewarding balance of the artist’s singular and identifying photographs as well as images they’ve likely never seen before. Narration by Abbott and Clay offers astute interpretation and biographical context further enhancing the collective experience and deepening our appreciation of this native son now known to the world.