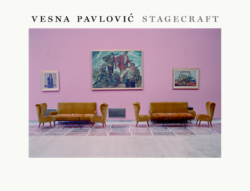 A new book from Vanderbilt University Press reflects on four exhibitions created by Vesna Pavlović between 1999 and 2019: Hotels, Collection/Kolekcija, Fabrics of Socialism, and Sites of Memory. A Nashville-based photographer and Associate Professor of Studio Art at Vanderbilt University, Pavlović’s stylized and studied volume illuminates a prodigious investigation that has been shaped through the political, social, and aesthetic contexts of American, Serbian, and Yugoslavian culture and history. Pavlović’s photographs also reflect a creative personality that’s tirelessly curious when it comes to investigating and deconstructing documentary subjects and stereotypes. 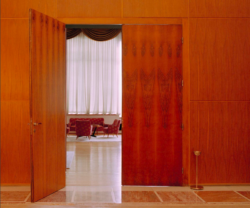 Pavlović was a photojournalist in Yugoslavia covering the political unrest during the Kosovo War and the activist artistic movements mobilized against it, working closely with groups like the feminist-pacifist Women in Black. Pavlović was assigned to cover the NATO bombing campaign in Serbia in April 1999, but when she arrived at the Hotel Hyatt Belgrade—the most luxurious of accommodations in Belgrade at that time—something unexpected happened. The hotel was serving as a headquarters for the international media who had arrived to cover the conflict and Pavlović was expected to capture the spectacle of NATO aggression: explosions, ruins, anguished civilians and stalwart soldiers. Instead she captured one of her most iconic—yet ironic, images: a hotel guest in a clean white bathrobe, lying on a fully reclined lounge chair next to the hotel’s indoor pool. The scene is sleepy-calm, you can almost smell the chlorine and hear the vintage beeping of the cellphone the man is dialing echoing off the pristine rows of ornate tiling that cover the walls and are reflected in the glassy surface of the undisturbed water. Pavlović entitled the image “Herzlich willkommen im Hotel Hyatt Belgrade, April 1999.” In Dr. Branislav Dimitrijević’s insightful introductory essay, “The Photographic Staging of the Nonperformative,” he points out how the date and location included in the title of this image places the serene scene into a chaotic and violent context to “provoke a question about what could in fact be treated as an accurate representation of the war.” The image reflects Pavlović’s taking a step back from the immediate maelstrom of the conflict to reveal a larger context of sharp ironies and clownish absurdity.  It is now apparent that this image inspired an entire series of quiet, contemplative shots of empty hotel interiors across Yugoslavia, and Dimitrijević comments that this series signals a demarcation between Pavlović’s early engaged and empathic work capturing the human passion on display in the anti-war movement, to the, “more speculative, detached or even post-human,” images that we now associate with the photographer. 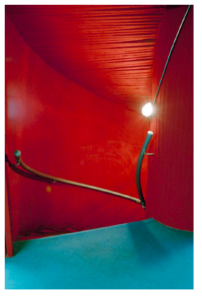 Stagecraft includes three additional essays reflecting on the displays captured in the book. Independent writer and curator, and Stagecraft’s editor, Dr. Jelena Vesić; Associate Professor of Art History in the Department of Art at Wake Forest University, Dr. John J. Curley; and professorial lecturer in modern and contemporary art history at American University, Dr. Jordan Amirkhani all contributed to the book’s text which is bundled together at the front of a sleekly designed volume wrapped in white linen. Putting all the commentary up-front leaves readers with one lush, chromatic, uninterrupted selection of photographs to pore over. 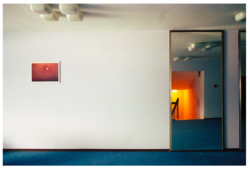 Each project bleeds into the next just as they usually do in the intimate workings of an artist’s creative practice.  Pavlović’s original hotel photos merge with her Collection/Kolekcija display of interior images from both Chase Manhattan Bank in New York and the Palace of Federation in Belgrade. These images blend seamlessly with the works in Fabrics of Socialism and Sites of Memory which investigate, deconstruct and reconstruct the photographic images found in historical archives.  Stagecraft’s all-at-once arrangement of two decades of photography invites readers into these unique far flung spaces and then opens up the drawers and cupboards to explore what’s been left behind.

Stagecraft is available for purchase directly from Vanderbilt University Press.

About the artist: Vesna Pavlović (Serbia/US) obtained her MFA degree in Visual Arts from Columbia University in New York in 2007. She is an Associate Professor of Art at Vanderbilt University in Nashville. Her projects examine the evolving relationship between memory in contemporary culture and the technologies of photographic image production. Expanding the photographic image beyond its frame, traditional format, and the narrative is central to her artistic strategies. She examines photographic representation of specific political and cultural histories, which include photographic archives and related artifacts.

Pavlović has exhibited widely, including solo shows at the Phillips Collection in Washington DC, the Frist Center for the Visual Arts in Nashville, Museum of History of Yugoslavia in Belgrade, and the Crocker Art Museum in Sacramento. She participated in a number of group shows, including the Untitled, 12th Istanbul Biennial, 2011, in Turkey; The MAC – Metropolitan Arts Center in Belfast, Northern Ireland; Württembergischen Kunstverein, Düsseldorf, Germany; KUMU Art Museum in Tallinn, Estonia; Zacheta, The National Gallery of Art in Warsaw, Poland; City Art Gallery, in Ljubljana, Slovenia; the New Art Gallery Walsall, Walsall, UK; the Bucharest Biennale 5, in Bucharest, Romania; Museum of Contemporary Photography in Chicago, USA; Le Quartier Center for Contemporary Art in Quimper, France; NGBK in Berlin, Germany; Photographers’ Gallery in London and Kettle’s Yard in Cambridge, UK; and FRAC Center for Contemporary Art in Dunkuerqe, France.

In the 1990s, in Belgrade, Pavlović worked closely with the feminist pacifist group Women in Black. Vesna Pavlović is the recipient of the The George A. and Eliza Gardner Howard Foundation in 2017, the City of Copenhagen Artist-in-Residence grant in 2011, and Contemporary Foundation for the Arts Emergency Grants in 2011 and 2014. She has received 2012 Art Matters Foundation grant. She is the recipient of the Fulbright Scholar Award for 2018.

Her work is included in major private and public art collections, Phillips Collection, the Hirshhorn Museum and Sculpture Garden, the Museum of Women in the Art in Washington DC, USA, and Museum of Contemporary Art, Belgrade, Serbia, among others. Publication about her work titled Vesna Pavlović’s Lost Art: Photography, Display, and the Archive, ?dited by Morna O’Neill, was published in 2018 by Hanes Art Gallery at Wake Forest University, USA.