Breakfast Burritos with Mary Jo Karimnia and The Brians 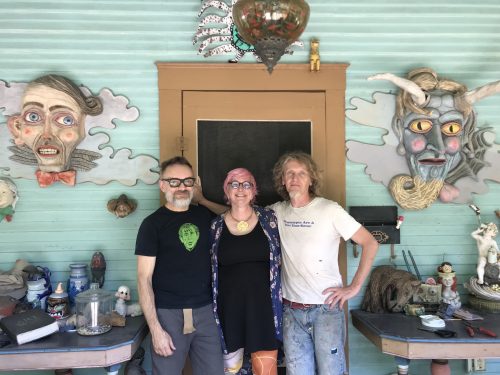 Brian K. Scott and Brian K. Jones are individual artists who also make artwork together under the collaborative alter egos of Chuck & George. They moved to Oak Cliff just southwest of Dallas about 25 years ago and have helped to build a vibrant arts culture there, creating opportunities both for themselves and other artists. I met “The Brians”, as friends often refer to the couple, in Memphis six years ago, around the time I joined the staff of Crosstown Arts where I now run the residency program. We became fast friends. As Crosstown Arts developed, my own role in the Memphis arts scene and my personal art career grew, and I found myself looking to the Dallas arts scene as a model, often asking the Brians for help and advice.

Parts of the Memphis arts community rely on or have grown from grassroots efforts: Crosstown Arts and the residency program grew from the desires of an art history professor and a Yale-educated photographer to start a residency program in Memphis through the redevelopment of a one-million-square-foot building that had sat abandoned for twenty years. It is now a vertical village that infuses art into the everyday lives of anyone who visits, lives or works in the building. Memphis has also had a fair number of house galleries that have heightened the dialogue over the years. I met the Brians through the house gallery scene and was instantly interested in their how they have been nurturing healthy grassroots efforts over the years.

The Dallas arts scene is more established and larger than the Memphis arts scene is right now. It has a healthy continuum of arts opportunities and options. But the Dallas arts scene struggles with the recent loss of a significant residency program and is recovering from a crackdown by the city on code violations that stressed the gallery economy. The Brians see the vacuums created – they exist in every arts economy – and find grassroots ways to fill the empty spaces. They have always worked this way, building comradery and offering real-life education opportunities along the way.

Three years after moving to Oak Cliff, the couple purchased a small home that they have transformed into a living installation that is a hub of comradery. They also purchased the house next door that functions as their working studio space, and they are hoping to purchase the house on the other side to offer an ongoing Chuck & George residency opportunity. 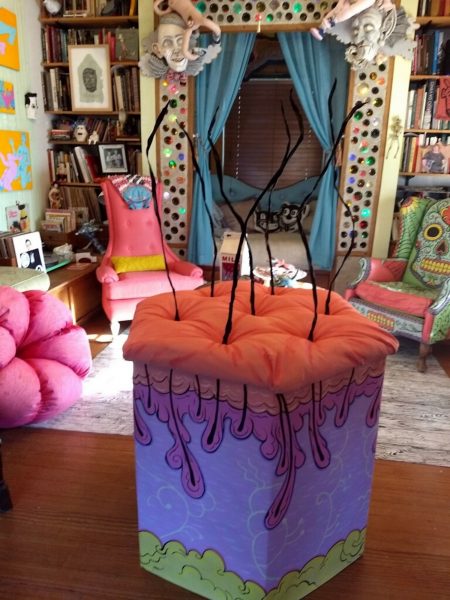 They have transformed every surface and wall in their home. The acidy, flower motif on the dining room walls is hand done and floors are painted to look like a cartoonish version of wood. A lounge chair has been completely transformed with a layer of acrylic paint to include classic Chuck & George imagery of a large calavera skull with wide, gaping eye holes on the back cushion, skeleton arms on the arms of the chair and a large black widow spider with a web on the cushion, all in classic Chuck & George pinks, acrid greens and yellows, and a bright Texas sky blue. Art and art things are EVERYWHERE, both their own work and that of other artists. After their extensive installation, Cat Butt Parfait, in Galveston, Texas, closed in August 2019, many of the larger installation pieces were incorporated into their living room, including large cat butt bean bags and a large hexagonal slice of feline epidermis complete with hairs sticking out of it (reminiscent of a scientific illustration but in 3D). On the upholstered flesh lurks self portraits of the duo, Chuck the tick and George the flea. The statement for the show asserts, “We are all parasites.”

Their home is one of many stops on the semi-yearly SpeedBump Art Tour, formerly known as the Oak Cliff Drive-By, organized by The Brians. Brian Scott describes the unlikely beginning of the event as a response to the upscale home tours that were already happening in the area, where people would show off the art that they were “…smart enough and wealthy enough to purchase. We thought it was a funny, snooty thing so we planned to put out fliers to have a studio tour on the same exact day as the Oak Cliff home tours” highlighting the makers instead. It took a few years to actually get off the ground, but the tour is celebrating its 20th year in 2019. “We had maybe tens stops the first year, and we knew most of the people. Oak Cliff had cheap rent and affordable studios. At this point it was pre-gentrification,” Brian Jones observes. “It is something that you do for yourself to a certain extent but really draws its power from the community of course.” Jones believes that an “artist cannot completely depend upon the competitive gallery scene to get exposure. You sometimes need to create opportunity yourself. In making a community event, you share that opportunity, but you also broaden the exposure through the collective audiences. It is our personal baby but it is for everybody. It is a community thing and I think it has been very beneficial for our careers.”

The Brians display and sell their own work during the studio tour, but they also recruit and highlight the work of other artists. They are currently focused on building relationships with Dallas’ neighbor-city, San Antonio. Instagram has been a good platform through which to build relationships. They watch for up-and-coming artists that they like on the platform and sometimes contact them. “We create a bond and it can grow from there. At our last SpeedBump show we had a San Antonio artist come up and install her work,” says Brian Jones. Brain Scott adds, “It was nice to show her work, and we liked her, and we are now friends. She went to our show in Houston; we hung out with her in San Antonio.” Brian Jones points out that this is similar to how we met.

The Brians also use this event and others, like their annual Halloween party, to expose people to the art of collecting. They are a great example of how to live with art in the real world. They have collected artwork throughout their career by purchasing work and trading. This collection is on display throughout their home. Brian Jones says, “We have only actually had our ‘studio’ open for the [SpeedBump] tour once. It has always been our home and our collection and how we live with art. How people live with art. This is about living with the art we collect…We have a collection that is from every year of our lives as artists.”

Collecting is an important part of a healthy art continuum and is something that needs to be nourished in economies where local department stores are a default, impersonal place to purchase artwork. Brian Jones sees a lot of value in collecting: “It is an exchange. There is an exchange besides money. I feel excited to invite the people that we collect over to see it. We are open about our collection… I think a cultural exchange needs to happen between different cities as well.” 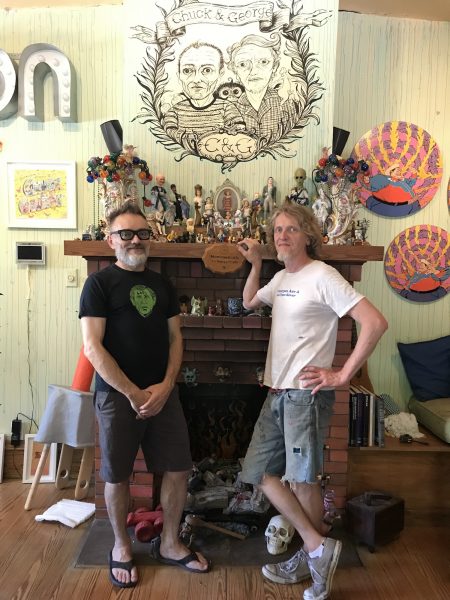 All of these exchanges, through artwork, add to the richness of a local culture. Or, as Brian Jones points out, artists sometimes create “counterculture, of course.” Brian Scott says, “That’s what they do in delis.” Create “counter” culture. This joking is a part of comradery building as well. I relish these sorts of moments within the art world and am grateful for the time I spent on a Sunday morning after a Saturday-night opening at RO2 Gallery where the Brians and I all have artwork on display. Brian Scott serves his amazing breakfast burritos on the front porch. I sit in the porch-swing next to Brian Jones while another local artist sits in a rocking chair strumming on a guitar between bites. Before long a couple of art collectors that the Brians haven’t seen in a while stop by. Quips are exchanged about how long it has been since they’ve had dinner together. Brian Jones asks about seeing their collection.

This is the type of minutiae that grows into genuine relationships that foster a healthy arts community, building real and deep connections that make a multilayered, sincere space in which artists and artforms can grow.

Mary Jo Karimnia is an artist running the Crosstown Arts residency in Memphis, TN. Brian K. Scott and Brian K. Jones (a.k.a. Chuck and George) are artists living and working in Dallas, TX.