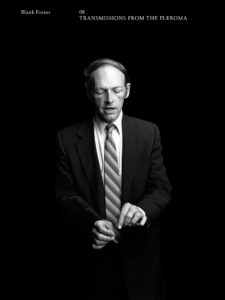 Jerry Hunt was an avant garde composer and performer who was born in Waco in 1943 and lived his whole life in Texas. His best known works were performance pieces: Hunt created electronic music in real time, using sensors triggered by the movements in his choreographed rituals which spoke to Hunt’s lifelong interest in the occult. Today, Hunt is considered to be a pioneer in the live use of electronic and computer audio-visual technology, and he started his own magical order as a teenager. Hunt was a nicotine addict who regularly chewed tobacco while dressed in a suit and tie. Hunt was a gay man living with his partner in Texas in the second half of the 20th century, and he was a hyperactive caffeine freak who performed across the world. Hunt is one of the most unique artists to emerge from our region which is known for its eccentric and contradictory creative personalities.

Jerry Hunt: Transmissions from the Pleroma opened at Blank Forms in Brooklyn, NY on February, 16 2022. The show was the first comprehensive exhibition of Hunt’s work, and Number readers can see it for themselves in the dense, gorgeous new book published by the fantastic Blank Forms Editions music, books and apparel imprint. This volume is stacked with words and images, photographs and video stills, programs and posters. Composer David Rosenboom contributes an essay that attempts to peer into Hunt’s creative thinking process by analyzing his early, rare compositions, and Lawrence Kumpf and Tyler Maxin’s illuminating introductory texts are required reading for understanding Hunt and his art through the lens of the Blank Forms exhibition. The book also includes essays by Kris Paulsen, composers Guy De Bièvre, George Lewis, Gordon Monahan, and artist Karen Finley. Blank Forms sent me the softcover version of the book and the inky black cover has a silky matte finish that highlights a black-and-white photograph of Hunt by John Katz. I generally find Blank Forms’ books to be beautifully designed and sturdy, and I salute their more-than-reasonable price points for such exceptional volumes.

Check out Jerry Hunt: Transmissions from the Pleroma from Blank Forms and watch Four Video Translations below. Four Video Translations was released as a videotape, and it includes the following works: Birome [zone]: plane (fixture), Bitom (fixture): topogram, Talk (slice): duplex and Transform (stream): core. Read more about it at the excellent, official Jerry Hunt site.