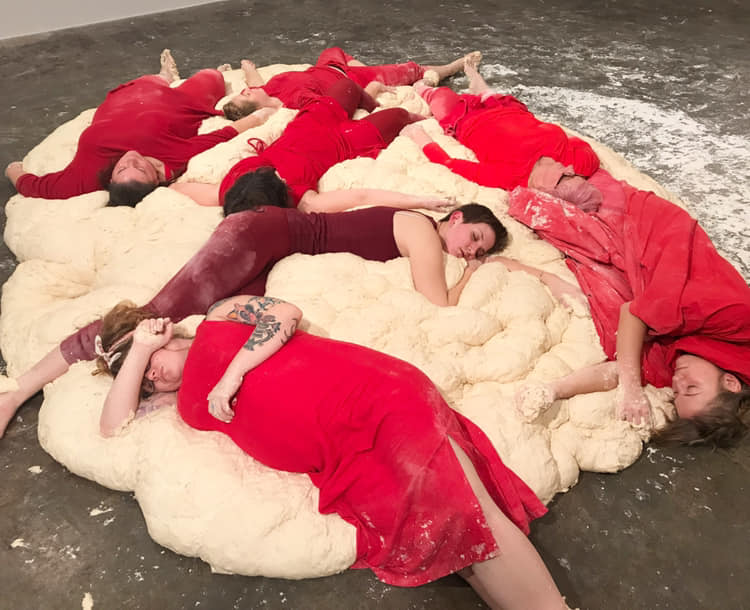 Wearing a long-sleeved tomato red shirt with matching leggings pushed up to her knees, a woman walks quietly through the door carrying a bucket of discoloured water bending under its own weight. Her bare feet pad across the cold concrete in deliberate steps as she makes her way to the perfectly formed well of flour that pervades the center of the 1,200 square foot gallery. She tips the bucket and gently pours the yeast concoction, trusting it will be contained by the powdery walls. She turns and walks with the same measure to exit the door from where she emerged. The photographer documenting the performance whispers, “only nineteen more buckets to go.” The audience members within earshot trade silent wows and raised eyebrows to learn how many buckets of water it takes to make eight hundred pounds of dough.

Santina Amato is an Australian artist, with Italian roots, living in Chicago. Her recent residency at Crosstown Arts in Memphis, Tennessee, allowed her to orchestrate the largest performance piece of her artistic career. With a background in painting and sculpting, the adoption of dough as a medium was an organic progression born from the maternal tradition of caring for family through domestic responsibilities. She shares a memory of her mother placing a bowl of dough under her bed covers and telling young Amato that it is “sleeping,” and to be very quiet as it rises. Comfort, warmth, and fellowship that unfold in the kitchen during a ritual historically shared between women is expanded upon as Amato removes the oven from the narrative. Her work explores the physicality of making dough and the intimacy forged through process over product. In the same way her mother shared the process with her, Amato shares the process with her audience as a way to continue the tradition.

Amato guides eleven women from the local community to push and pull the flour as it tries to escape in the air and across the floor. Grunting, panting, and sweating their way through the incorporation of ingredients to form a sticky carpet, each woman then takes her turn to walk the periphery. The dough grabs her feet, pulling her body back to earth with each step. She grasps another woman’s hand to steady herself, until several hands have to pull her through an oppositional force. They wear red because it is the color worn by Margaret Atwood’s handmaids; it is the color of pulsating interiority as described by Chris Krauss’s character in the television version of I Love Dick; it is the color of counter-opposition.

The women giggle and whisper words of encouragement meant only for each other. They collapse in the dough as it hugs their shoulders and waists, crawls through hair, between legs, and covers ears as they sink into solidarity with one another. The dough continues to rise as the blush dissipates from cheeks, and the sound of breath begins to slow. Afterwards one participant describes that, “kneading and folding the dough was exhausting, making the moment of rest a tremendous, shared accomplishment.”