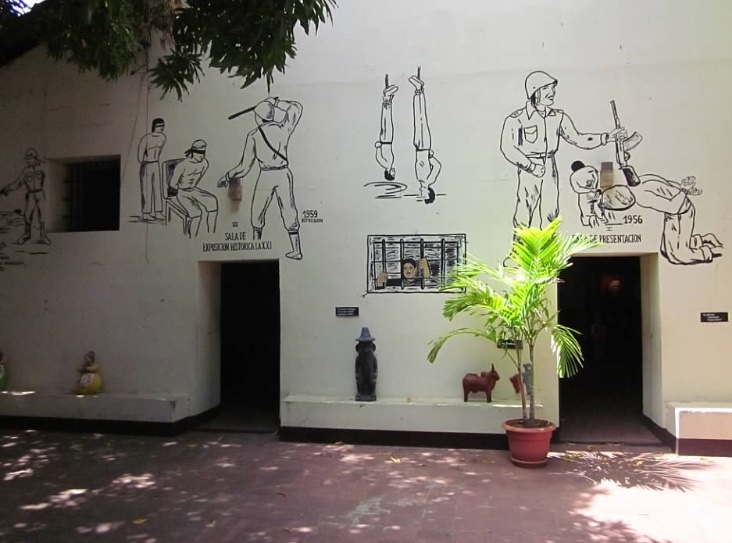 Leon, Nicaragua. Museum de Leyendas y Tradiciones (Museum of Legends and Traditions). The museum building was once the infamous XXI prison where from 1921 to 1979 many Nicaraguans suffered, including the author’s uncle, Nester Perez, 2007. Photo courtesy of Maria McDowell.

My mother had just turned 15 when she left her family in Leon, Nicaragua, and boarded a Chicago-bound plane for the United States of America.  It was a frigid, winter day in 1965 when Sandra Perez landed at O’Hare International Airport, equipped with a few words of English, a belly full of butterflies and a broken heart. Her brother, Francisco, the eldest child in her family, was supposed to be on that Boeing 747 headed for a new life, not her. The summer before, her family received news that he lost control of his motorbike and landed at the bottom of a hill, fatally crushing the base of his skull on a rock. He was a jovial and handsome 17-year-old who agreed to take his friend to the beach on a breezy summer day in their hometown of Leon, the former capital of Nicaragua. My mom was the last to see him in front of their house as he gave her a big smile, kicked his bike into gear and headed down the dirt road. Francisco’s death was instant.  His friend walked away with a broken arm. 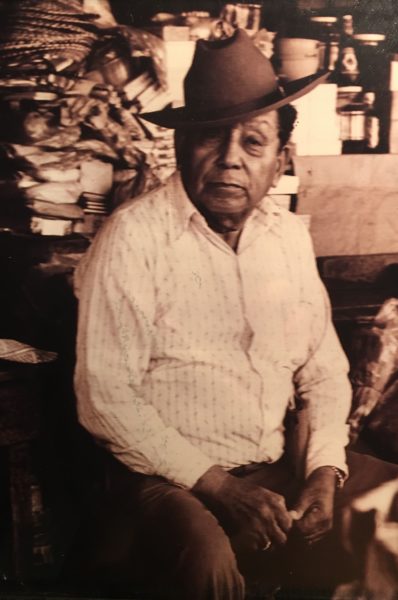 Abraham and Isabel, my mother’s parents, had watched Nicaragua slide into peril for decades as the politically corrupt dictatorship, led by the Somoza family dynasty, tormented its people. Revolution was brewing. People were overrun with disease and malnutrition. Families were torn apart as disaffected youth left to take up the fight with the Sandinistas, a rebel group led by a young Daniel Ortega that violently opposed the Somoza dictatorship. My grandparents had very little education but knew its inherent value and that it could help keep their children out of the fray. Schools and universities had suffered under the oppressive regime, so it was common for middle-class children to be sent to more stable countries for the outsourcing of degrees and unbiased information. My grandparents wished to send at least one child overseas with high hopes of them becoming a doctor, lawyer or engineer and with the even higher hope of them returning home to help stabilize not only the standing of the family, but also to become part of the generation they could trust to rebuild their ravaged country. Many parents in town were frantically trying to do the same thing for the same reasons. They understood the shaping of culture and politics in any society wholly depended on an educated class. Nicaragua had been held back for centuries by foreign invaders, corrupt leaders and civil wars, stunting and preventing the independence and potential of its people.

After Francisco’s funeral, Abraham made an unconventional decision. He had arranged for his son to be taken care of during college by the Petersons, a suburban Chicago family. Instead of asking the next male child in line to go in his place, as was tradition, he offered the opportunity to my 14-year-old mother. She immediately said yes. Her father told her he knew the family could depend on her and that she was tenacious and smart enough to bear the burden.

The symbol for Iron on the Periodic Table of Elements is Fe. It is also, fittingly, my mother’s middle name. Throughout her stay with the Petersons, Sandra Fe learned the importance of self-reliance and handled obstacles along her path with fierce self-determination. Contact with her family was rare and although the Petersons were kind, she couldn’t count on them for everything. Not only was she struggling with the language but also with overwhelming guilt from being the chosen one, the one who was responsible for her remaining 4 siblings’ bland diet of rice and beans most nights. The family was relying on her to be the rising tide that lifted their boats.

Sandra invested everything into her studies, received good grades, learned the joy of rock and roll and a McDonald’s milkshake and, although she longed to become a doctor, she set her sights on first becoming a nurse so she could quickly earn a living and put herself through medical school. She wanted to pay her family back for their sacrifices. Mom enrolled in the College of DuPage’s nursing program and, when her best friend asked her to go on a double date and meet her date’s roommate, she was reluctant but eventually agreed for her friend’s sake.  She always told me, “I wasn’t looking for any distractions. I was determined to keep sight of my goals, but life is full of uncertainties!”

Back home in Leon, things were getting worse. People feared both factions. The Communist-minded Sandinistas were relying on support from Cuba, Korea and the Soviet Union. Somoza’s army, who later became known as the Contras, received support from the U.S. guerilla-style warfare; it came from both sides and it was difficult to tell the difference. Masked men brandishing automatic weapons rolled through town in trucks intimidating, imprisoning and murdering people at random. My grandparents arranged for two more sons to travel to Mexico to begin college. Trenches were being dug in the street in front of their house to bury the dead. My great-aunt’s store had been raided and she was scolded by men in masks who told her, “THESE THINGS DON’T BELONG TO YOU, THEY BELONG TO THE PEOPLE!” Young boys were being forced into fighting for both sides of the conflict now. My mom’s teenage cousin hid in the rafters while his mother convinced soldiers at the door that all the men in the house were gone or dead. A couple of her siblings were forced by the Sandinistas into the mountains to teach reading and writing and her youngest brother, Nestor, was thrown into prison for owning books that were considered illegal.

My parents were instantly smitten with each other during their double date. After dating for a while my mom could no longer deny they were in love, and neither could imagine life without the other. Mr. Peterson abruptly passed away that year, leaving Mrs. Peterson ill-equipped to fend for her own children, let alone my mother. Mom had just finished her second year of college when she learned that her green card status would be revoked unless a new guardian could be secured. Fortunately, my dad’s father had been observing the young lovers and knew they were in agony. He didn’t see any sense in breaking them up on top of preventing Sandra from finishing her degree, so he made a bold suggestion to my dad: “Son, your mother and I have our 25th wedding anniversary coming up. The church hall is already rented for the celebration and everyone is coming. Why don’t we change out the invitations and make it a wedding ceremony instead?” The pictures from my parents wedding told of a time so magical, I would cry as a child and ask why I wasn’t invited. 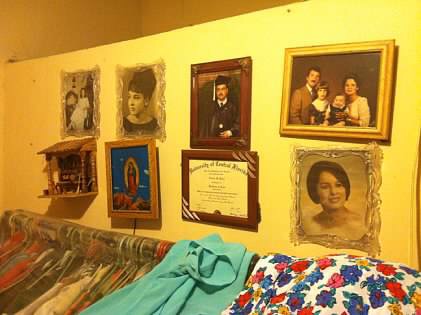 My parents relied heavily on my dad’s family in the years to come. Everyone eventually grew tired of Chicago winters and, with my mom’s urging, most of my father’s family followed them to Florida. Mom embarked on what would become a 43-year career as a nurse manager, and both of my parents felt privileged to help support her family in Nicaragua. She decided to have children instead of becoming a doctor. She knew her father was proud of her and proud that she had, indeed, lifted them all up, even if she didn’t end up returning home; he passed away a few years after she got married but, before he did, my parents visited him. As they said goodbye for the last time, he finally shook my dad’s hand and stoically gave his approval. He and Isabel sensed she was in good hands with someone dependable who would never let her fail. She was flourishing and helping others realize their full potential, and that’s ultimately what they wanted for her.

Tragically, another son was lost during the Managua earthquake in 1972 while working as a resident physician in a hospital. They searched and waited, but he was never seen again. Isabel’s impenetrable strength is something to behold and, whenever I need courage in my life, I remember her bravery as well as my mother’s. She came to live with us when I was in middle school in an attempt to embrace American culture and to get to know my brother and I, but she couldn’t trust American culture and society like she could Nicaragua’s and left a couple years later. She is one of the most precious people in my life and, as sad as I was to see her go, I’ve always respected her choice.

My brother, mother and Uncle Nestor during her first visit to her family’s graveyard plot in Leon, Nicaragua, 2007. Photo courtesy of Maria McDowell.My Uncle Nestor also came to Florida to live with us later. Using the same self-sufficiency as my mother, he began to thrive. He earned his master’s degree, secured a great job and bought his first house. Yet, after 24 years of striving for the American dream, he too missed Nicaragua and her beauty. Last spring, he made the untimely decision to sell everything and go back. The unfortunate current state of politics in Nicaragua, however, has prevented his return. In the meantime, he’s staying with cousins in Costa Rica. In an ironic twist of fate, President Daniel Ortega now violently clings to power much like those he fought to overthrow, and the country is experiencing a bloody political déjá vu of sorts. Yet, despite everything, Nestor says he is overwhelmingly proud to see young, creative, educated and impassioned men and women standing up to the government; men and women who know their ancestors are reliant on them to effect lasting change. I remind him that soon he will be part of that change and remains the only Perez son who came home. 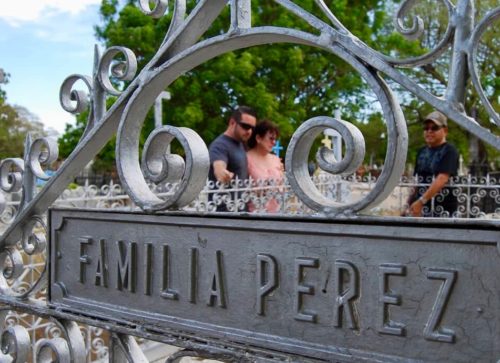 Maria McDowell holds a BS in Journalism from the University of Florida and lives in Atlanta, Georgia.