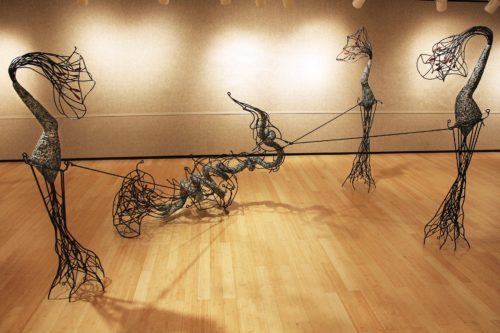 In 1898, an open letter printed on the front page of the liberal Parisian newspaper l’Aurore began with the words “J’accuse.”   Emile Zola thus began his denunciation of the President of France and of the government for anti-Semitism in the conviction of Alfred Dreyfus, who was accused of having provided secret military information to the German government. Although he was eventually exonerated and even awarded the légion d’honneur, Dreyfus suffered greatly during his ordeal, undergoing not only public humiliation but also physical hardship, spending time in the penal colony on Devil’s Island off the coast of French Guiana.

For decades l’affaire Dreyfus split the French intellectual community: one was either pour or contre. “J’accuse” has since become the generic cry of outrage against injustice anywhere in the world.

And this phrase might well serve as subtitle of Duane Paxson’s current exhibition at Virginia Tech’s Perspective Gallery. Choosing as his point of departure the late 17th-century witch trials in Salem, Massachusetts, Paxson denounces the mass hysteria that led to the accusation of 200 persons– both male and female– for witchcraft and the execution of 20, who are now believed by many to have been innocent. Titling his installation Malelingue (2016, literally, “bad tongues” in Italian), Paxson excoriates not only the historical incident but more universally the human proclivity for scapegoating, in matters both large and small.

Dramatic and theatrical—like the language of the title—Paxson’s highly abstracted figures in welded steel, fiberglass and wood seem to writhe and convulse with baneful energies. Near the center of the installation,  a “witch” lies on the floor: a wondrous configuration of reptilian, spiraling fiberglass terminating at one end in a fanfare of thin steel tubing and at the other in a slanted point with a rounded loop at its tip.  Red “teardrops” dot the work, like splashes of blood.  Pivoting around this tortured creature stand three “bad tongues,” the accusers: misshapen, crooked “bodies” held up by tangles of steel, “heads” like “trumpets” blaring indictments, their evil words indicated by lozenges of red wood. Taut steel rods link the victim to her tormentors, as though she is being torn apart, as in medieval torture. These lines were inspired, Paxson says, by paintings: the forceful diagonals of Caravaggio, especially in “The Crucifixion of Saint Peter” (1601), as well as by the zigzag lines of the canes welded by the unsighted beggars of Bruegel’s “The Parable of the Blind Leading the Blind” (1568).

Similarly linked by a rod to an accuser, two other “witches” stand: their serpentine torsos encased in spastic steel “cages,”  ending at the bottom in wondrous spheres of intricately welded steel, and at the top in fluid designs replicating unbound, flowing hair. These agreeably undulant lines underscore the “witches’ ” feminine allure, calling into question the attackers’ motivation: jealousy of another’s beauty? latent fear of sex? Or rather does their seductiveness render moot the question of their innocence? Sexual deviance has long been an undercurrent of sorcery lore.  However culpable or blameless the victim, the artist implies, false accusation effects only injurious consequences. Not only are the “witches” racked, but their accusers suffer as well, misshapen physically as well as morally by the allegations they wage. “Accusation is very difficult to escape,” the artist contends.  “No matter how you try to exonerate yourself, it is almost impossible to prove your innocence.”

Echoing the sculptures are thirteen wildly imaginative drawings from the artist’s Witch Hunt series. A fantastical creature with a bulbous “head” and a protracted “nose,” “Osteopath” (2013) is “muzzled” by a linear encasement. Suppressed by the medical profession and forced to battle for acceptance, the artist contends, these natural healers are not recognized for their true worth. With pointed mushroom-like “heads” changing into crossed “stems,” “Festering Twins” (2014) deals with the struggles of sibling rivalry. “Witch Stamp” (2014) refers not only to contemporary tattoos, popularly known as “tramp stamps”—seen by many as contemptible– but also to the supposed marks of Satan on the body, which, in the 17th-century, were inspected  by other women rather than by men. A profusion of lines somewhat like shooting stars, “Nightmares of Faith” (2014) commemorates those who are ridiculed for sharing their apocalyptic visions, either real or imaginary. Darksome and somber, “Black Magic” (2013), “a pouch of evil spells,” the artist says, was inspired by the practice of incorporating an evil thought into each knot tied in a string. A bifurcate configuration, “Dreams Apart” (2014) refers to the dual aspects of each personality, ideally in concert, but often in contention.

Not only has Paxson merged a compelling narrative with expertly crafted abstract sculptures and drawings, but he has at the same time highlighted an invidious and  unfortunately fundamental propensity in human nature: the affinity for judging, then condemning others.