Eric Mack’s Alpha Numerics at Channel to Channel in Nashville 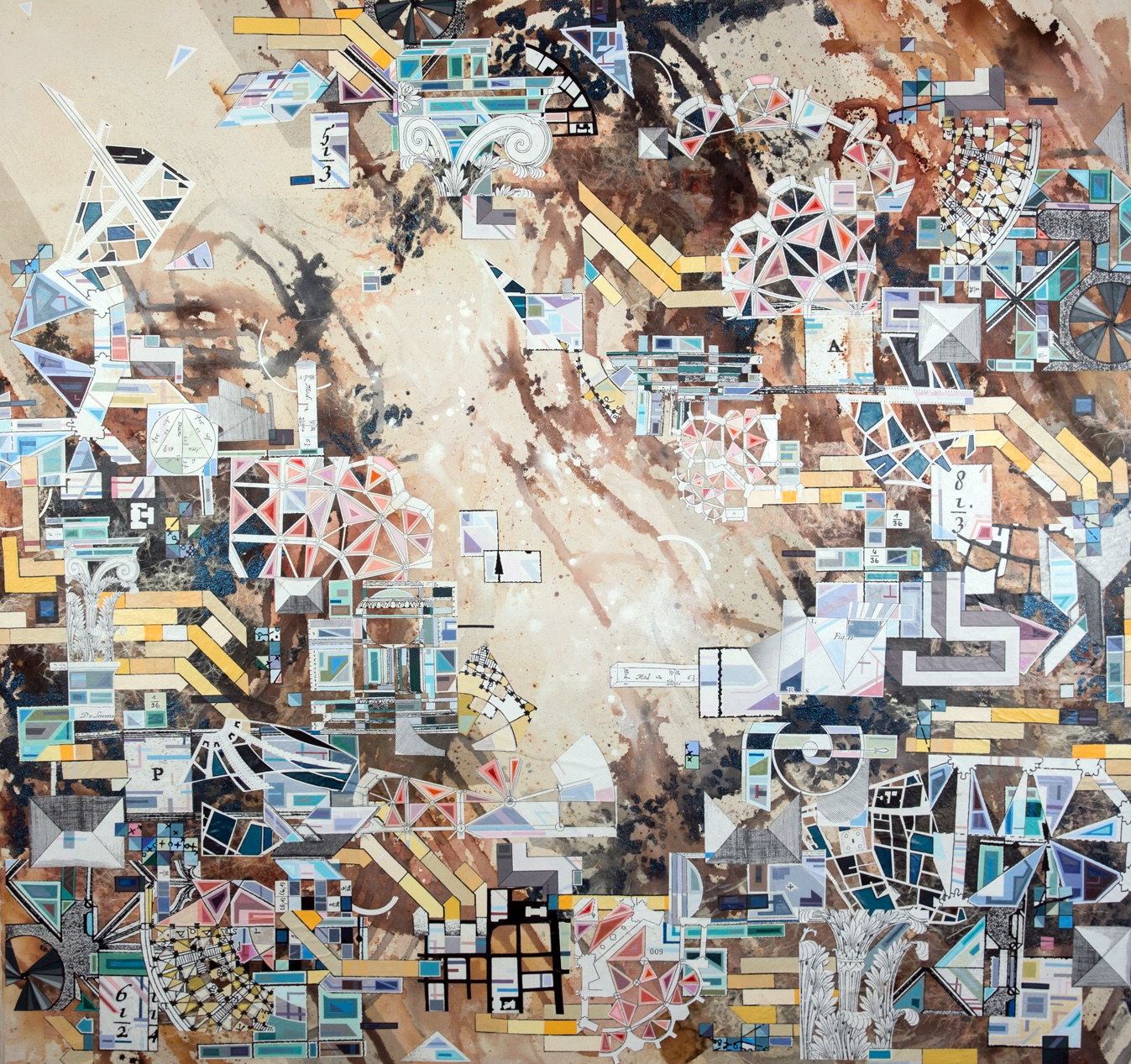 Atlanta-based painter Eric Mack’s Alpha Numerics is showing at Channel to Channel in Nashville through October 20. These works offer compelling studies in abstraction where the grids of maps and satellite photos, and the angles and lines on blueprints become geometric elements in the artist’s expansive, palimpsestic surfaces. This show comments on the vocabulary of abstract painting while also pointing to the impacts of development in the New South. Alpha Numerics also constitutes a retrospective of a kind offering a broad glimpse at the first half of a mid-career artist’s evolution in the 21st century.

The works in Alpha Numerics cover almost two decades of Mack’s production from 2000 to 2017. Mack graduated from Atlanta College of Art in 1998, and this exhibition reads like a survey of the artist’s entire production up to the present day. Generally, a retrospective of this scope necessarily falls later in an artist’s career, but the oddest aspect of this display might be the consistency across this cohesive exhibition. Alpha Numerics shows us an artist who has evolved and improved over nearly 20 years of studio practice, but it also shows us an artist who found his path early, and who has followed it without wavering

All of Alpha Numerics’ mixed-media works on canvases, on panels or on paper essentially follow the same formula: expressive, organic color fields and gestures provide the backdrop for meticulous constructions of bits of maps, blueprints, xeroxed photos and design elements that are applied to the surfaces to inter-cut, emphasize, decorate or smother the sections of the colorful, nebulous abstractions. PRG-2000 is the earliest work in the show, painted in 2000. The background is made up of geometric swatches of color overlaid with similarly patterned blocks of imagery from maps and more: a paragraph in Japanese Hiragana; bold graphic question marks; xeroxed photos of a nude woman’s torso and a portrait of Edie Sedgwick – the whites of her eyes are painted greenish blue.  Just eight years later, Mack’s overall approach to his materials was the same, but his mastery of technique and tone is evident in MTB-4276, the most effective piece in the show. Here an amorphous violet cloud rolls across the background while being half consumed by Mack’s obsessive collage designs. In Mack’s early production his layers echoed one another, but the artist’s work took on a powerful new dimension when the painted layers began to contrast with the constructed elements, and a tangible tension emerged from their struggle for balance. Channel to Channel curator Dustin Hedrick shared an anecdotal observation that the works offer an emotional, subconscious layer that’s overlaid by the strict analytic angles and hard lines Mack builds over, around and through it. I’m all for psychological interpretations, and the overall effect in Mack’s best work is a balance between something chaotic and something controlled.

Of course, it’s said that all art is ultimately self-portraiture, but Mack’s focus is also bigger than that. His expressive, organic, colorful backgrounds are captivating unto themselves, and his collage work could constitute standalone mashups of pop culture imagery, sections of maps and blueprints, and countless xeroxed, cut out, and meticulously painted elements. It’s the painted bits that tie the backgrounds and collaged surfaces together, and it’s the combining of these two techniques that make deeper discussions of public and psychic spaces possible. Again, in MTB-4276, a serpentine cloud of cabernet-colored chaos winds its way up the expanse of a six-foot tall canvas – on its own it would resemble a painting of a Hubble Telescope photograph. This cosmic gesture is colonized by hundreds of elements that speak to immensity and the celestial– a solar design, a graphic illustration of the profile of a satellite dish, maps of constellations – and the local – map symbols again, a list of country names, emojis and other symbols borrowed from our internet culture. From street names, to national identities to cosmic locales and even the virtual spaces that house our cultural unconscious, Mack’s work explores context and the framing of universal cultural questions, but for this artist the most important questions connect identity with real estate – both real and psychological – in displays about Location! Location! Location

The colorful collage elements gradually consuming the gentle muted browns and tans of RSRFC-O31976 conjure thoughts of the neighborhoods and natural spaces’ slow burial beneath the relentless development in Nashville, Atlanta and across the New South. There are many things that characterize Southern living – foods, traditions, accents. But, in the end, the South is defined by the Mississippi River, the Gulf of Mexico, the Atlantic Ocean, and the Mason-Dixon line. Being Southern is a state of mind, but being in the South is as strict as a cartographer’s rule and as definitive as land giving way to water. Alpha Numerics reminds us that we have a place in the cosmos, but it also situates its viewers in this sometimes disorienting here and now. 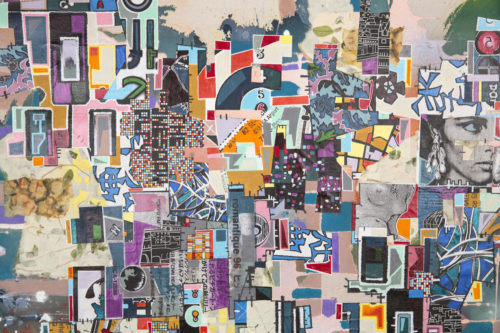 Joe Nolan is an intermedia artist based in Nashville, TN. Find out more about his music, photography, poetry and more at https://www.patreon.com/MightyJoeNolan.