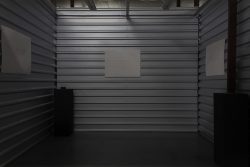 The metonymic potentials of oil and a poetic interplay of politics, materials, and language are dominant themes in Fereshteh Toosi’s Oil Ancestors: into the proofer at 3127.space, in Chattanooga, Tennessee. Consisting of three medium-sized wall-mounted prints, a stack of take-away embossed letterpress prints, and two plinths bearing objects best seen through the introduction of a UV flashlight (supplied to the viewer), the show is minimally composed and dimly lit, which works well to elevate the interplay between each constituent part. All objects in the space glow a fluorescent blue under the visitors searching spotlight, suggesting a twofold latency within the all encompassing black and viscous material that is at once social, political, ecological, and spiritual–mapping specifically onto all objects and ideas circulating in the show while persisting outward into most aspects of our daily lives. 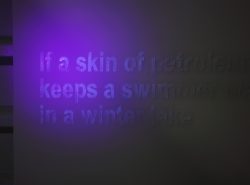 The extractive forces and labor invested in the production of petroleum are beyond most individual’s level of comprehension; a complexity of successful industrial, technological, and logistical feats are registered tacitly every time the cent counter on the gas pump clicks forward. A material so vast in its applications—especially when including the landscape of polymers, is truly a monolithic conception. The language around oil is codified and fortified, and Toosi’s scaled down musings produce an intimacy and esoteric specificity that subverts the hegemony that is oil writ large paradoxically through a direct encounter with the raw material itself, working to delineate the ways in which consumption and production both industrial and cultural are abstracted through global capitalism and politics. An important component of this exhibition is Toosi’s Iranian and Azeri heritage, as the artist’s background informs the work and yields agency in deconstructing the ironic exotification and exploitation of oil as both a spiritual and political edifice in the United States 1. 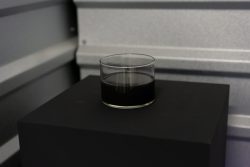 These themes are enacted by the artist’s playful use of light and viewer participation as each person’s handling of the ultraviolet reveals in real-time the phosphorescent qualities present in all of the oil-based materials used in the show. Included is a jar of branded Crudoleum® on one plinth—a specifically unrefined form of crude oil packaged and sold to consumers for holistic hair and scalp treatment, and petroleum enhydro crystals on the other plinth, quartz crystals with small traces of oil trapped within. The employment of these specific objects conjures and critiques the speculative health regiments involved in certain new-age movements and cultural trends, which can be seen as a grouping of religious sects often predicated precisely on the materials in which practitioners choose to engage with. Essential oils, alternative and/or atavistic health practices, and prescriptive diets are among some of new-ageism’s transformative beliefs in materials and materiality. Importantly, the attraction to these alternative beliefs is undoubtedly linked to exoticism and utopianism and is surely an appropriative enterprise 2. 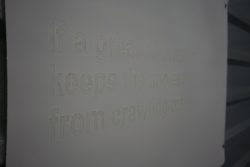 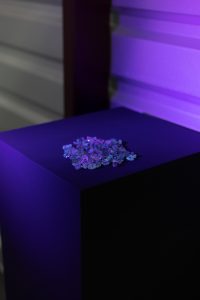 A magical fascination with things-that-glow-in-the-dark is offered to the viewer to possibly suggest omnipotence, transformation, or a cohering mysticism in the materials at hand. However, the enchantment and intimacy felt in this interaction with oil in its primary state becomes fraught when reconciling the attributable countless deaths, global conflict, and ineluctable effects of climate change. Furthermore, the magical conditions in which these materials have come to be viewed in dominant and mainstream religious sects–fueled by rigorous disinformation and defamation campaigns by corporations such as Exxon–inevitably lead to new forms or justifications for false-idolatry, colonization, and domination 3. It is exactly this “contravention of categories and misplacement of ideas or artefacts…[as]…political gesture,” by Toosi that enacts a kind of magical, radical, and critical engagement with the material on a human scale 4. This expanded interaction with oil reminds us of its temporal and finite qualities that are so often jeopardized, abstracted, and thwarted by countervailing sources of lobbyism and crony-capitalism. 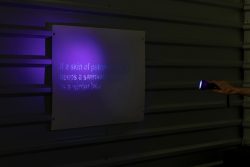 Perhaps the most engaging aspect of the show both conceptually and formally is the series of wall-mounted prints, which consist of text pieces printed in petroleum jelly. The white paper greased thickly with yet another iteration of oil–here refined to the point of being completely clear—revealingly glows bright blue under the forensic spot of a UV light. The text spells out several lines of poetry that shore up the show’s irreverence and magic to a more lucid, elegiac, and resonant response to the socially and ecologically destructive, incontrovertible force that is petroleum. The text pieces wrap around the small, corrugated metal-walled space that enacts an enshrinement and entombment, housed within a large storage-unit building in Chattanooga’s Southside district—a burgeoning enclave of restaurants, coffeeshops, and breweries built into a surrounding graveyard of abandoned steel mills which vacantly haunt the topography of the region. These are vestiges of a once powerful American industry—now elsewhere—and monuments to insufficiency, instability, and the enduring impact of extractive practices worldwide.

1. For more information, see Darren Dorchuk’s Anointed with Oil: How Christianity and Crude Made Modern America

3. For more information on the successive campaigns bankrolled by Exxon to spread disinformation, and their intentional targeting of “lesser educated males from larger households who are not typically information seekers” read Phoebe Kean’s BBC article How The Oil Industry Made Us Doubt Climate Change. Many other campaigns have been similarly and nefariously founded on a similar correlation between conservative ideologies and white, blue collar labor class, and education. For more information, see Timothy J. Lombardo’s Blue Collar Conservatism: Frank Rizzo’s Philadelphia and Populist Politics

4. Sally O’reily’s fantastic essay, Bewildering Logic, written for the book Magic Show, explores tactics and strategies employed by artists that are akin to theatrical magic and work to subvert and decentralize traditional modes of critique and creation.

Fereshteh Toosi (they/them) is an artist of Iranian and Azeri ancestry whose projects foster animistic connections through encounter, exchange, and sensory inquiry. Fereshteh lives and works in Miami, Florida on stolen lands still stewarded by the Miccosukee and Seminole people, and previously by the Calusa and Tequesta tribal bands.

Fereshteh earned The Ellies Creator Award in 2018 for Water Radio, a series of live art events that take place during canoe and kayak outings. They were chosen for The Montréal/Miami New Narratives Lab hosted by the National Film Board of Canada, O Cinema, MUTEK, and FilmGate Interactive. They also earned a Knight New Work 2020 award and a Miami Live Arts Lab Alliance residency to develop Oil Ancestors, an immersive telepresence experience about petroleum.

Fereshteh is an Assistant Professor in the Art and Art History Department of the College of Communication, Architecture, and the Arts at Florida International University.

Bradley Marshall is an artist, writer, reader, and educator from Nashville, Tennessee. He earned his MFA from East Tennessee State University in 2018 and attended the Skowhegan School of Painting and Sculpture. He is co-editor of NumberInc. Magazine and adjunct instructor at Austin Peay State University. His work and writing has been exhibited nationally and internationally. He is currently in residence at Stoveworks, a contemporary art space and residency center in Chattanooga, Tennessee.