In Conversation with Sofia Gonzalez 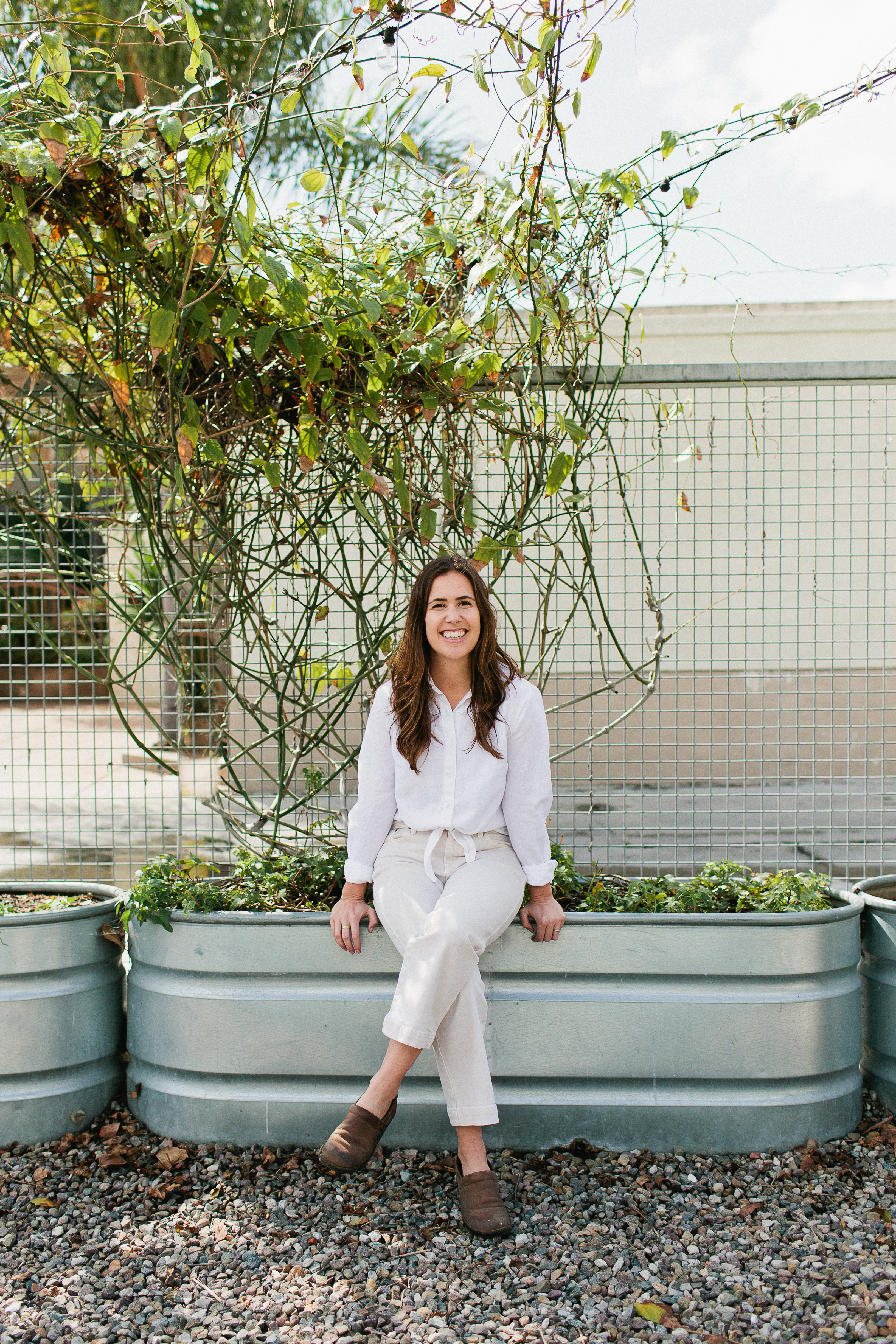 Madison Balushi: Can you tell us about you and your work?

Sofia Gonzalez: I usually describe myself as a textile artist. In my practice, I use natural materials, like plants and vegetable waste, to dye fabric and create my own pigment as a way to respond to my natural environment. I used to paint with acrylic paint and I really found a disconnect between the love I had for the landscape I was painting and the materials I was using. I would wash out all of my acrylic paints and they would go into the water supply and then who knows where they went from there, so I switched over to natural dyes and since then it’s kind of been a love affair with natural pigments and the possibilities that you can create with local plants and environment.

What is your personal history with craft?

I grew up with textiles in my life. My mom is a quilter and my grandmother crocheted and knit and embroidered every day of her life until she passed away at 98. So, I grew up in that environment of craft, and I made my first quilt when I was thirteen. Then, I went to college to study art. Craft wasn’t really thought of as art, so I never really thought about using it in my fine art practice until graduate school.

That sounds like a wonderful way to grow up.

Yeah, it was. My mom still quilts; she has a whole quilting room. She is much more precise and mathematical than me, but we share our love of fabric together.

So, thinking about what you said about your college experience and not really considering textile work to be an art, what is your opinion on the distinction between craft and art?

It’s a tricky line; I’ve read so much about it and studied it in school, and I’ve taught it before. When I think about it, I usually think that a craft is a verb, like when you make something, you craft it, you are crafting. The line between a knit sweater and a contemporary sculpture, I usually think is the topic or the ideas behind it. Art can be functional, I think, but usually the fabrics I naturally dye, that is a way to remember and record a place, which has a more fine arts concept. Whereas if I made a dyed napkin, it could have that meaning. but its primary use is functional versus something more conceptual. It’s a tricky line but for me; the distinction lies in the idea behind it. 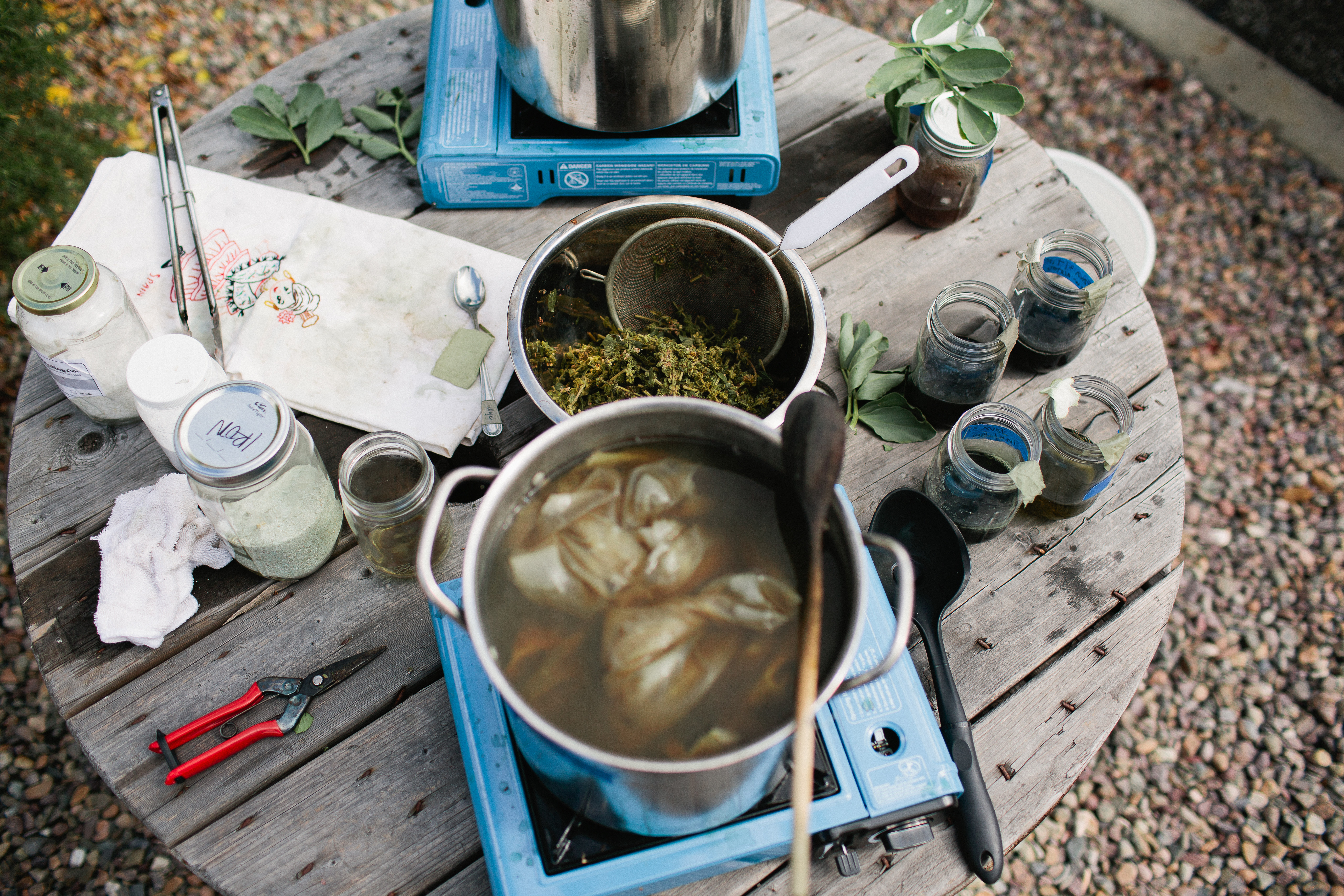 What do you think your work has revealed to you about yourself or the world around you?

I’ve found that my textiles are my response to climate change and change in general. I think natural dyes are a way to remember a place and record it in an almost frantic way, so that I can always remember the colors and place and so much of that plays out into the fabric. I’ve done a lot of work about home and where I live, whether that is where I grew up or Arkansas, and I have different associations with those places now too. It’s a way to see all of the places I’ve been while still allowing me to be present in the place I’m currently in.

I’ve noticed that you talk a lot about place in your work. How would you say the physical location you are in when you produce each piece affects what you produce?

My goal with the natural dyes is to use what’s directly there. For example, when I lived in Arkansas, there were a lot of native plants that I had never experienced before in northern California, so the place became the focus and also the material. I used plants from my backyard and my neighborhood in Little Rock as the source material of the colors I could create and that would dictate what I would make from it. To me, I think there is a difference between a site or a landscape and a place. A place is somewhere where you spend time, where you’ve done a daily routine, where you’ve spent time and energy in that specific location to give it meaning for you. That’s when it becomes a place.

You’ve already touched on this a bit, but what changed for you when you moved to the South from California?

My husband got a residency in Arkansas and at the time it felt like a really foreign place. Most of my family didn’t even know where Arkansas was. The biggest thing for me was the culture shock. The South is so different from California, and there aren’t a lot of aspects in which they cross paths – at first glance, anyway. The pace of life and the people in Arkansas are very welcoming. It was incredible to live in a home, which would’ve been way more expensive in California, so getting to have a studio and make art in the backyard of my own space was really special. The whole experience opened me up to try new things and to try new plants. It was such a welcoming place we really felt like we could be ourselves and try new things. The South was a place where natural dyeing wasn’t as practiced, so I had a lot of opportunities to teach, which I also loved. 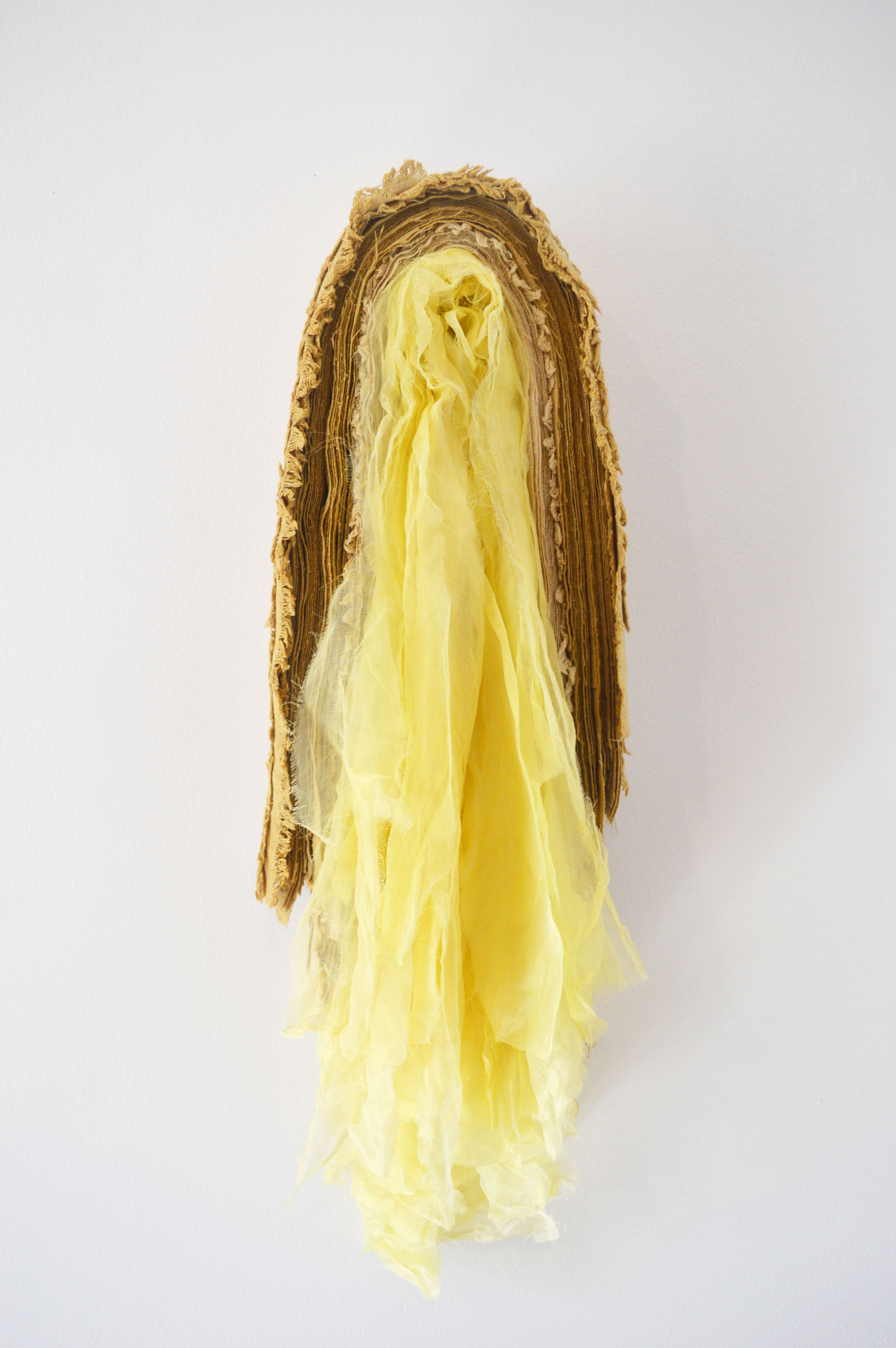 What are three words you would use to describe your relationship with the act of creating and making?

The first word that comes to mind is connecting. I think any kind of creating is a way to connect with yourself and with other people. Also, my work specifically allows me to connect with the world in a way that I don’t think I would do otherwise. Another word that comes to mind is recording. Recording experiences and memories in a landscape through the colors of the landscape and seeing my experiences in that location through the colors that were around me. And I will have to think about what my third word would be (she later told me it is home).

You were talking a bit earlier about how climate change drew you to your current process. How does your work with natural dyes make you more aware of the changes happening in the natural world around you?

I used to get really stuck on this idea when I first started thinking about climate change and my relationship to it. I used to feel like because I’m artist, I have to do something directly to change it. But ,ultimately, that it a heavy burden for someone to bear. Eventually I learned that in many small ways I can do my part; that’s when I adopted the natural dyes as a way to bring people’s attention to their own neighborhood. Climate change is a global problem, but this is a way to put it into perspective and recognize that it could impact that one plant you love or the park you walk your dog in. I think that helps make the issue feel more focused and real.

Would you like to talk about your current work?

Yeah, so as we’re talking I’m currently picking basil at a non-profit in San Diego called Art Produce where I have an artist residency. They have an incredible community garden where people can come plant their vegetables and pick produce. I’m planning a project right now using the materials from the garden.

Before we wrap it all up, is there anything else you would like to express about your work or yourself that will complete the narrative of who you are and what you do?

Well, I’ve talked a lot about the process, but I haven’t really mentioned what I do with all of the fabrics. For example, I’m working on an ongoing series that I started in 2014 to create different portraits of places, which is also the title of the series. It all started one day when I was hanging fabric on the wall to dry. I realized I loved the looseness of the hanging fabric. They hang on the wall as a sculpture, and they represent different places and times. There is one called Self Portrait that has pieces of fabric from everywhere I’ve lived piled up around a dowel in the center. It’s just built up and, now, it’s almost as big as me. Each work has a strange bodily size and scale to them that creates this kind of soft sculpture. I’m currently working on adding more to that series.