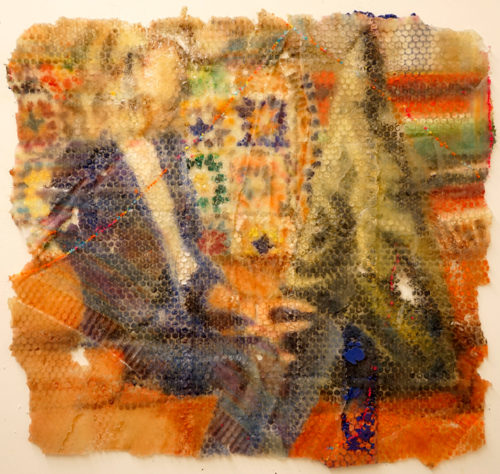 The Painter as Experimental Chemist

The second time I hung one of Eleanor Aldrich’s paintings in an exhibit, I was apprehensive. Untitled (After Venus) was a 24” x 21” floppy piece of silicone with embedded paint. It had been molded on a piece of bubble wrap, and had the transparent look of an unflavored gelatin mold. There was no hardware to hang it with. Aldrich handed me a box of straight pins. “Just keep poking these through it until it seems secure”, she said. I expressed concern about damaging it. “The holes are self-sealing” she assured me. She was right. The Arizona native, who lives in Knoxville and is a recent MFA recipient from University of Tennessee, Knoxville, has recently been taking her experiments to an even higher level. We talked in her space at Knoxville’s Vacuum Shop Studios.

Your Dad, Charles Aldrich is an artist. He had done a lot of commissions for the Catholic Diocese in Arizona where you are from, which almost makes him sound like this mystical figure from the Renaissance. Did this influence you growing up?

Yeah, definitely. He did a lot of crucifixes. I grew up in a Catholic church, so we’d have life size crucifixes he would be painting in the house. I learned a lot by watching him and a lot about about figure painting by watching that. I talk about my work having a Catholic influence more broadly in terms of my interest in the materiality of the paint and the image it is contributing to, and the tension between those two. Sometimes they are working together for the same purpose -sometimes they are pulling apart. I like to talk about that as transubstantiation, which is the substance becoming the body of Christ in Catholicism, but in the case of paint, it is me wanting the actual thing – not a picture of the thing. In my mind that is like Catholicism – the capacity for belief.

How does the use of representation in your work inform your intent?

It relieves me of being paralyzed by choice. I like having a basic idea that material applications can hang on, but it has to be something that is not so strong content-wise that it crowds out the materiality of the painting. My instincts are to choose something that is banal, or commonplace, and then make it magical, mysterious or interesting through the way it’s made. The subject matter exists as something to carry the material. 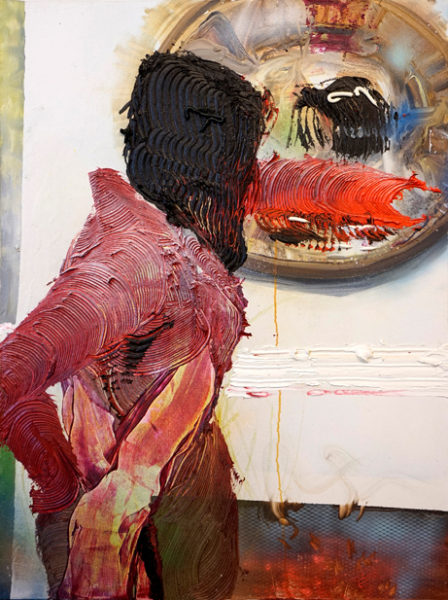 You are one of the most experimental artists with media I’ve run into – do you sometimes think of yourself as an artist/chemist?

Yeah! I feel like a total bad-ass when I put on the mask and gloves! But sometimes I wish I was more disciplined because there are certain things I keep trying that I keep failing at. I usually accept the failure to a certain degree in my work, because it is a negotiation of what I want out of the work and what the material does, but sometimes it’s just a mess – a disaster. I’ve been trying to grow crystals on some of my work with borax, and a couple times it’s worked really great, and a couple times it’s been an awful mess and I’ve been disappointed. I wish I was more of a diligent chemist that kept track of what was actually working, but I’m not. If the process of making something is too tedious I won’t keep track of it. It’s that experimental nature of art that keeps me making things. I like having materials that are a little bit beyond my control, because that is where new things happen.

Totally home supply stores. I buy a lot of silicone and painters calking – things like that, but I’m also lucky to have a lot of friends who work at art supply stores that can get me paint that is too old to sell.

Do you go dumpster diving and construction site trash hunting for substrates and other materials?

Oh, yes! For awhile after the election I was collecting the armatures from political signs to make things like ladder drawings and stuff, so yeah. As a kid I was collecting rocks, but in Tennessee there aren’t a lot of them, so it’s become other things. 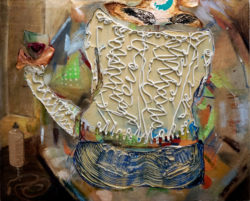 The Girl With the Seagull Tattoo

It was actually a friend in grad school at UT/Knoxville that was using it. I was looking for something. I had been using really thick oil paint and it wasn’t the easiest or cheapest thing. It takes forever to dry. When it does dry it will wrinkle or get dust stuck to it, so I was looking for something that could be used as filler that could be intermixed with oil paint. Silicone is fast drying and cheap, but a bit toxic which is unfortunate.

You are working on some three-dimensional pieces now – is this new?

Yes- I’ve been collaborating with this woman Barbara Weissberger who is a photographer. We’ve been doing installations together, so for a show in the University Art Gallery at the University of Pittsburgh last February I needed some. I’d been using these thick, bulky materials, and carving or manipulating them, and molding them in other ways. It’s not that big of a step for me to have things come off the canvas edge. I’ve also been doing a lot of floor work, which is a natural way for things to go when I’ve been working on the floor. I’m still uncomfortable with three-dimensional work, though. I’m still trying to figure out a balance between the three-dimensionality of not just the surface of the piece, but combining that with some two-dimensional aspect of painting.

This looks like a mutated penguin.  (I’m holding a small sculpture made from molded expansion foam with a surface drawing in black paint)

Yes! It’s from a cleaning bottle. I did a bird drawing on the inside and quickly filled it as a mold. I used a spray bottle as a mold too, and I have some others in this group from other containers. I’ve got this other one that I call a fish head that was molded from an old gas mask. I think of these as three-dimensional drawings.

Are you thinking more of evolving into three-dimensional work? 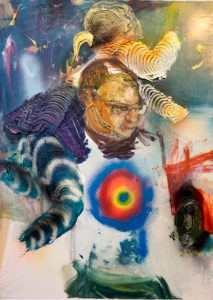 Not necessarily, I’m still really interested in two-dimensionality. The big break was when I stopped using stretcher bars. I got away from this “Painting by definition is on stretcher bars” but instead just hung things as a cloth. It’s as if the material is just cloth and the paint just expanded from it, instead of just paint on top of a substrate. You just have the paint. The paint has expanded to an absurd and obnoxious degree, which

is what I like about it.   I like the idea of materiality just taking over something in a way that you can talk about “material culture”.

So where are you going now with your work?

I have a lot of stuff going on at once. I like to work on a lot of different things. I have to focus on curating things, and deciding what goes together – how does a body of work come out of this array of things I’m trying.

What are the upcoming exhibits you have on your schedule?

I have a solo show at Lincoln Memorial University in Harrogate, TN from Aug. 15 – Sept. 29th, then a two-person exhibit, Shadyville, from Sept 2 – Oct 26, 2017 with Heather Hartman in Chanel to Chanel Gallery in Nashville.

Denise Stewart-Sanabria is a Knoxville based artist and writer