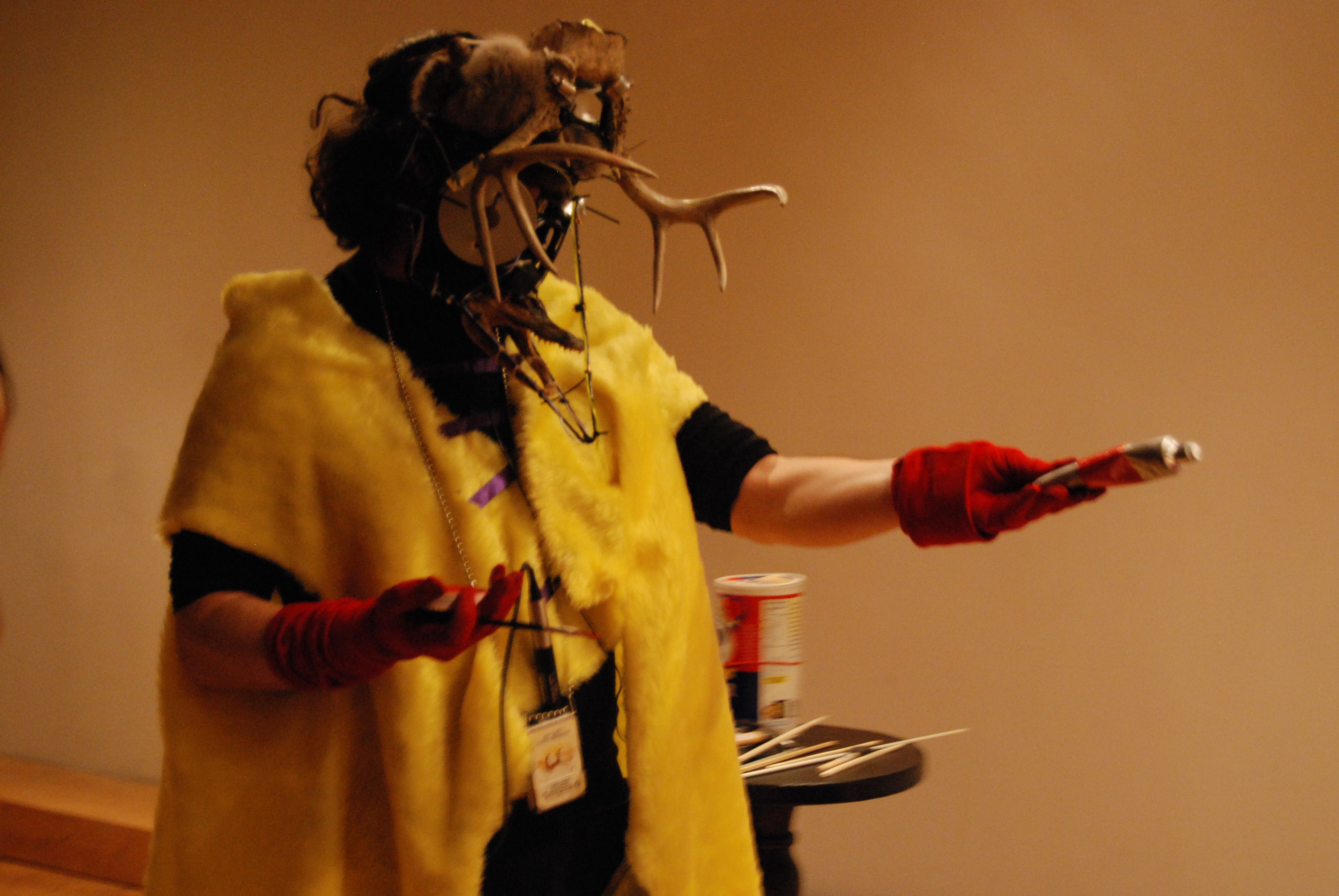 A performance by Guillermo Galindo involves a bizarre ensemble of objects filled with symbolic and sonic significances, which he manipulates in ways that transcend mundane reality. The barriers between audience and participant dissolve as the visual and musical combine to create sonic rituals. That the composer, performance artist, and self-described “catalyzer that uses space and time as mediums of communication,” creates multilayered experiences with his work is an understatement. His signature Cyber-totemic sculptures are assembled with found objects and present new possibilities for sound, visual spectacle, and transformation.

Galindo is not interested in what is easy and clearly seen; his ritual performances are complex and mystical. Like a shaman, he pulls from other realms to inform the terrestrial experience. Our conversation for this interview explored his philosophies and practices of breaking boundaries, healing through sound and objects, and invoking hidden histories.

Sara Lee Burd: Many of your artworks evoke histories of places, people, and objects. For example, Sonic Re-Activation: Unearthing Public Square’s Forgotten Pasts you composed during a residency at Vanderbilt University. It awakened and honored the memory of indigenous ancestors and the history of Nashville’s Public Square, a space once used as a slave market and tied directly to the performance location. How does sound have this power?

Guillermo Galindo: I believe that every place deeply holds the energy of all the events that happened there. In that same way, sound and materiality of our personal objects are attached to our actions, our journey through life. Sounds also can recall specific events and actions that occurred in the past. It has the power of remembrance and remembrance has the power of healing. Bringing back memories can transport us to other times; sound can transform our perception of the environment through time. 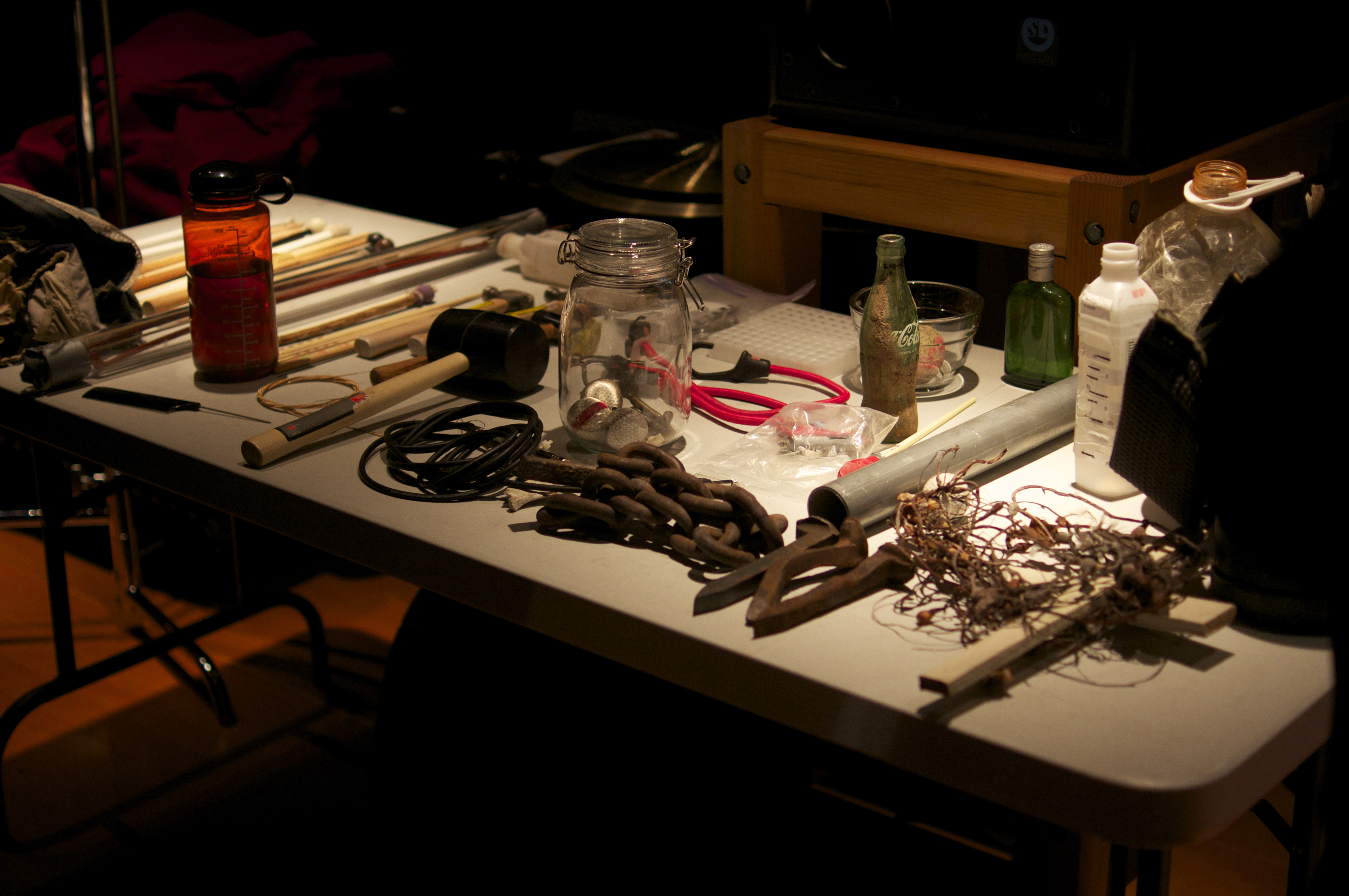 How do your Cyber-totemic sonic objects evoke the celestial and terrestrial realms?

It was believed in the Native American traditions that if you produce sound, that sound is connected to the existence of the emitter of that sound. We call this animism. Everything is a unit with particular energy that coexists with everything else. Our personal objects are not separate from us. The ecosystem that surrounds you is a combination of objects that are related to you. Connecting to every object or person that constitutes your ecosystem is indispensable for your well-being.

The Spanish colonizers brought with them already syncretic beliefs. When they came to Mexico and Latin America, they brought a particular version of Catholicism. This version already had pagan roots dating from before the time when they were conquered by the Romans. The Roman Catholic church took over, and they kept their pagan roots just as when the Spaniards came to Mexico and Latin America; the religion kept a lot of its indigenous traditions. The same happened with the African religions from the Caribbean. African slaves kept close to their beliefs which merged together into Santeria, Macumba and other syncretic religions.

One of the things that Spaniards brought to Latin America were these objects called relics. They could be remains of old sacred books, bones of a saint, mummified skin, pieces of clothing, splinters of the cross where Jesus died. All of these items were meant to connect the beholder to sacred beings. Praying to the relics united the material with the spiritual.

While I was studying contemporary classical music, I ran into the work of Pierre Schaeffer, a French Concrete Music composer. He wrote a treatise about “musical objects” and ways of listening. He conceived this idea called acousmatic listening.  Schaeffer’s idea behind acousmatic listening came from the way Pythagoras lectured to his students. He would stand behind a veil that wouldn’t allow them to see him. Pythagoras did this so that his students would concentrate on his voice and not on his body or persona. As a post-World War II composer, Schaeffer was one of the first people to use recorded sound and magnetic tape to produce what we know as Concrete Music. His Reduced Listening Technique asks the listener to separate the recorded sound from its original source. So, for example, if you record the sound of a train, and you play it back to another person, the listener is not supposed to connect it to the train itself but to appreciate the sound on its own with no associations.

What I find interesting is the contradiction between the Native American sonic ideas and the Reduced Listening Techniques; one attaching it to the source, the other isolating it. Since the Enlightenment, the European mind has been gradually disconnecting itself from the physical. There has also been a continued disconnection between the physical and the spiritual. Priority has been given to the mind. At the time of the Renaissance mythos and logos, mythology and logic, had the same importance. Logical thinking and science took over mythology. Today we live in a world where reality and truth are defined by science and logic.

Native Americans recognized our connection to everything surrounding us. The disconnection between the material and the spiritual applies to music. In the history of musical instruments, we had the string of the bow and arch, later the guitar which became mechanical like the harpsichord. Then came the piano and then the cathedral organ that works with wind, and the electric organ that translates voltage into sound. Then followed the synthesizer, and then the computer that produces sounds at the stroke of a key. Our detachment from physical objects has increased through the centuries, and the history of Western musical instruments confirms that.

Psychomagic is a term created by Alejandro Jodorowsky, which involves healing through personal objects. He developed his ideas from many spiritual traditions including a healer from Mexico City, Doña Panchita; she also used objects to heal people. While growing up I used to play with the idea of healing with objects, too. I saw many things growing up in Mexico. Around 2006, after I composed my orchestral piece for the Oakland Symphony Orchestra, something clicked in my head. I felt isolated from my work after the performance. At some point I even felt detached from my own score, from the musicians and from the audience.

From that experience came my first Cyber-totemic object called MAIZ. It was an electromechanical instrument. I built it with everything that was “blocking” me. Things that were making me sick. There was a box of wine that I drank while I was writing the piece. It became a resonating box, a piece of an expired credit card played the strings, a metal plate that I found in the waste after a two-hour meditation; there was a box of cigars that was another percussive part of the instrument. All sorts of things that belonged to me and were either seen as part of the aesthetic of the instrument or just sound emitters. MAIZ was my first healing object. It created a direct connection between me and the audience. Many years after, I went to the U.S./Mexico border and started looking for objects left behind by immigrants. This detritus was used in my Border Cantos Project and later in Echo Exodus which I did for documenta 14. I thought that if this didn’t heal the people from suffering, it could at least be a symbolic gesture to call attention to the humanitarian crisis of migration. Perhaps the sound of these items could speak for the immigrants.

The term Prosopopoeia refers to a rhetorical device that writers use to tell a story from the point of view of objects, plants, furniture, and animals. My Cyber-totemic objects tell stories about their owners through sound. In my sonic rituals, every object speaks with its own voice. Each has a unique sound and a particular way to speak. They speak to the unconscious mind as the listener creates her own imaginary stories.

How did your interest in mystical practices develop?

Spirituality has become a charged word. I believe in arriving to the ultimate truth by means of love, empathy, and compassion towards others. This is not an easy task. Recognition has to be a daily practice.

I grew up Catholic. There are many priests and nuns, on my father’s side of the family. Jesuit priests that entered priesthood with the idea of helping and healing others, and some of them ultimately confronting the limitations of institutionalized religion. My family’s heritage was a gift. I believe I took with me what I thought were the most valuable teachings of religion.

Today, I meditate, I have discovered the incredible depth of the Mesoamerican and Native American spiritual practices, their understanding of life and everything that lives, the magic of the Afro-Cuban Yoruba, Buddhism, the understanding of dreams and archetypes through Jung and the Tarot of Marseille, the power of listening, of yoga practice, and the art of “not doing.” These are the practices that help me create and appreciate everything around me.

Can you explain ways in which you maintain and break boundaries to create new possibilities?

Art is the materialization of what we imagine. Imagination doesn’t have any limits. Innovators are those who can conceive what is not here yet without the fear of being excluded or being called fools. Titles, labels, and identities are limitations imposed by society. They provide us with the illusion of belonging. The relief of “being normal.” Art that doesn’t cross boundaries ultimately ends up imitating what is already out there. We feel comfortable with what we like or what we already know. It is scary to abandon our comfort zone. Looking into things we don’t know and facing our fears, liberates our creative process. Everything changes, and change opens all possibilities and opportunities.

Sculptures and scores by this Oakland-based, Mexican-born artist have been exhibited broadly including documenta 14, Miami Art Basel, and the Rusk Festival. Galindo’s live performances can be seen worldwide.

Sara Lee Burd is an art writer, curator, and explorer.