The landscape of the South Plains of Texas is wide, open, and flat. Hundreds of years ago, herds of buffalo would roam here, grazing on the vast and various grasslands. Today, from horizon to horizon, almost every square mile of this land is planted with one single crop – cotton – a monoculture that has decimated the biodiversity of the region, while creating a society of farmers dependent upon the massively powerful agro-chemical companies that produce the genetically modified (transgenic) seeds, insecticides, and herbicides that enable this kind of farming.

Artist J. Eric Simpson grew up on a farm outside of Lubbock, Texas, growing corn and cotton. After receiving his BFA in painting from Texas Tech University in Lubbock, taking off for a short stint in Peru as a Christian proselytizer, and spending a semester traveling and studying land art in the American West, Simpson attended the University at Buffalo, New York, home of the Coalesce Center for Biological Art, where he received his MFA in 2017. Simpson has now returned full circle, back to Lubbock, Texas, where he is currently working at the family farm and living as an artist-in-residence at the Charles Adams Studio Project. His latest work is intimately tied to the region, using the tools and materials of monoculture crop production to critique and subvert this highly destructive and environmentally combative agricultural model, while proposing more sustainable and mutually cooperative alternatives.

Can you talk a bit about the nature of the corporate power structures at work in the agro-industrial systems in the South Plains and how your work addresses them?

My main interest in the agro-chemical industries focuses on the role they play in shaping the landscape of the South Plains. The types of products they create – transgenic seeds (GMOs) and accompanying herbicides – influence the type of farming practiced here. As an agricultural model, monoculture is a very destructive way of farming, yet it is promoted as cost-effective, efficient, and profitable for the farmer. Ultimately, this allows the agro-chemical industries to focus on the production of three main crops: corn, cotton, and soybeans.

One of the big catches to this system is that farmers are prohibited from catching, collecting, and replanting the seeds produced from their GMO crops. This is be- cause the seeds are protected as intellectual property of the company.1 This creates a relationship of dependency between farmer and seed producer. The situation becomes even more problematic when you realize that the South Plains is the largest cotton producer in the United States. As of 2015, 91% of all cottonseed sales in the U.S. were controlled by four firms, many of whom have begun to merge with one another.2 Responding to this, my practice takes on the nature of monoculture by utilizing its materials (transgenic seeds, herbicides, etc.) against it as a form of subversive exercise. I want to call into question the role played by these companies – how do they alter the landscape? How do they set up systems of reliance? Are they sustainable? 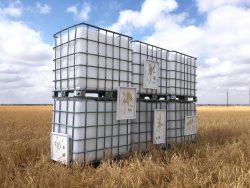 What are some of the materials that you employ in your sculptures and installations and what is the significance of your use of those materials, and the resulting color palette that is derived from those materials?

Since my research is focused on monoculture farming, most of my materials come off the farm where I work – transgenic cottonseeds, herbicides, IBC chemical totes, cotton, etc. In order to cultivate the type of conversation I want around my work, I feel it necessary to be very particular about my materials. For instance, if I have an idea that needs to manifest itself as a painting, it’s not enough to go to Hobby Lobby and buy tubes of paint anymore. I find that terribly boring. Instead, I’ll turn Monsanto’s transgenic cottonseed into paint. In this way the medium is always adding layers to the work. The color palette is dictated by the color of the materials. For instance, some seeds are a deep blue color and others purple. The herbicides tend to be an off-white or yellow color. To top this all off, I will typically show the works under greenhouse grow lights. These artificial “suns” cast a purple glow over everything. The result of these colors deflates any delusional hopes of monoculture feeling “natural.”

Something I was rather devastated to learn is that one of the maligned weeds that Roundup is supposed to eliminate is edible and was utilized by Native Americans. This calls into question the value system that not only places in opposition some plants as “cash crops” while debasing others as “weeds”, but completely erases the understanding of any utility to the “weed,” thereby ensuring that it is viewed solely as a pest with no inherent value (while also paralleling the erasure of indigenous culture and knowledge). In another way, you propose a theory that for the big agro- chemical corporations the true “cash crop” is not cotton, or corn, or what have you, but the weed itself. Can you explain why that is?

To sell a product you must first sell a problem. This is Marketing 101. The situation we currently find ourselves in on the farm is all about a manufactured problem – what is a cash crop and what is a weed? A nice working definition for a weed is anything that you can’t make money on. This is a relevant (albeit problematically relevant) way of defining monoculture as both an agricultural practice and as a way of being in the world. So, what is the problem to be sold in order to promote the need for transgenic seeds and their accompanying herbicides? The idea that weeds are valueless and prohibit you from making money.

The first product to sell this problem in the early 90’s was Roundup Ready Cotton and the now infamous herbicide Roundup.3 Because the cotton has been genetically modified to resist the herbicide, you can spray it indiscriminately on your land, killing everything but your cash crop. Interestingly, the “weeds” evolved a resistance to Roundup.4 The first was careless weed (or pigweed), a plant native to North America that was used by Natives as a food source.5 Other weeds followed suit and soon Roundup was useless. In response to this, the agro-chemical companies found more potent chemicals (Dicamba, for instance) and they genetically modified new seeds to resist these chemicals. Once again, the weeds evolved and the process repeated itself. It should come as no surprise that each time this happens the cost of seeds and herbicides increases.

I suggest that the real thing allowing the agro- chemical industries to make money is not the product sold: cotton, corn, or soybean, rather, it is the weed. The weed is their cash crop – their ever-evolving problem. It’s brilliant, really. As weeds evolve, farmers keep looking to the companies for the solution – another layer of dependency in the system. 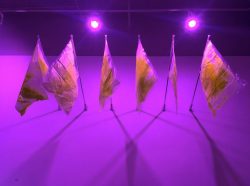 Another side of your practice involves the critique of Protestantism – which is what you grew up with and is the dominant religion here – and how it collides with consumerism. Might there be intersections between monoculture and Christianity? Do they go hand in hand or do they coexist uneasily? Do they both encourage dependencies?

This is a tough question because I can imagine contradictory answers to it. According to Scripture, the Judeo-Christian God gave humans control over nature and living things therein. In this way, monoculture is the epitome of man doing everything he can to control nature, to make it efficient in his eyes. I’d say a transgenic seed is the most complicated example of this. We are now at a place where we can breed and engineer life across species. This is playing God on a whole new level. You have to ask, is this compatible with the Christian religion? My gut tells me no, but I don’t see too many Protestants protesting it.

Another line of thought this question suggests implies possible links to colonization. Christianity has been used, unfortunately, to justify the colonization of peoples all over the world. This process has been beneficial for the colonizer and detrimental to the colonized. Through the destruction of native cultures and histories, through the spread of disease, and through the enslavement of peoples, this country was built on what Sven Beckert, in his book Empire of Cotton: A Global History, calls “war capitalism.” We took the land, we enslaved the people, and we built an empire. Colonization is a form of “monoculturing” – a valuing of one thing over another based on profitability.

The harsh reality is that Christianity, in some cases, has been complicit in the act of monoculturing (not in the agricultural sense, but in the human sense). Just as monoculture sells the problem of the weed, Christianity sells the problem of sin. This takes a harsh view of Christianity, I realize, but I haven’t met anyone who was convinced that they needed Jesus before they were convinced of their sinfulness. In this light, both monoculture and Protestantism must cultivate a certain level of dependency – a problem with a solution.

What kinds of sustainable alternatives and innovations do you envision that could take the place of monocultural agricultural practices?

We need to do several things in order to create an alternative to monoculture: first, get more people back on the farm, farming. Less than one percent of our global population farms today and monoculture has been the most viable model for picking up this slack. Second, we need to focus on the health of our soils. Utilizing multi-species crop rotations year-round is a great way to combat nutrient depletion from monoculture. It will also create great groundcover to suppress unwanted weeds. Third, we need to figure out how to utilize weeds in our agricultural system. How do we shift our perception of the weed, how might we work alongside it, rather than against it? Fourth, we need
to imagine creative solutions to water usage for a future of dryland farming. Could we design sculptures that collect and distribute rainwater? Last, we must limit use of herbicides and insecticides and focus on ecosystem-based solutions to pest control. There’s usually a bug that eats the bug you don’t want. Biodiverse ecosystems have a propensity to self manage. We should imagine ourselves as part of that system, rather than the ones controlling it. 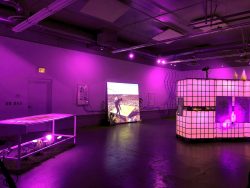 Natalie Hegert is an arts writer and editor based in Lubbock, TX