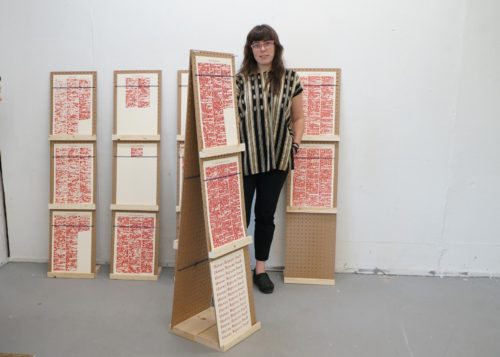 Katie Hargrave is a multi-media artist interested in the production of American identity through politics, history, mythology, and narrative. Her work elevates stories from popular culture, those hidden in the archives, and the everyday conversations from passerby’s and participants. In addition to her studio practice, she is an assistant professor at the University of Tennessee at Chattanooga. Originally from Chicago, Katie received an MA in Cultural Production from Brandeis University and a MFA in Intermedia from the University of Iowa. Her work has been shown at Proof Gallery in Boston; Gallerie Analix in Geneva, Switzerland; the Manifesta Biennial in Murcia, Spain; The Philadelphia Art Alliance, and the Athens Institute of Contemporary Art, to name a few. http://www.katiehargrave.us

Number: How do you engage with collaboration? Has this always been an interest in your artistic practice or has this developed with time?

Katie Hargrave: For me, collaboration is a way to make things more complex. More voices, more brains, more complex thoughts. When I work with others, my ideas are shifted, I am challenged, and the projects get stronger. Collaboration helps me to become a better listener, to support other artists alongside me, and to broaden connections to different modes of working and different spaces within the art world.

That said, the way I think about collaboration has changed. I have been collaborating as long as I have been making work, but more recently, I have also become interested in co-created, participatory ways of working. I am interested in the audience becoming more present in the conception of the artwork, perhaps because it can make things messier, more dynamic. Bringing non-artists into making helps to dispel the mythology of artist as genius (which I think is still present in our idea of studio practice), which is a political gesture as well. I am interested in exchange in my projects; I pay attention to the dynamics of what a participant gives and what they receive. It is a two-way street.

I also make sure to make time for my solo studio practice alongside collaboration, as a counterpoint. These projects are where I can nerd out on whatever research I am obsessed with at the moment, focus on the craft and the making, and get into a more meditative state in the studio.

In February of this year, you were in a joint exhibition at Brown University’s Sarah Doyle Gallery called How to Unmake an American Quilt. Did you alter any of the previous concepts for the project?

When you make participatory artworks, you cannot test everything before the project is presented, leading to surprises along the way. In “How to unmake an American Quilt,” my collaborator Amber Ginsburg and I were invited to produce the work for a DIY artist-run space in Chicago called Roman Susan. Amber and I were thinking about taking a traditionally female craft apart as a questioning of gendered labor.

At the opening, a group of women from a church choir came and participated in the un-making. One of the women from the choir was a quilter and very involved in the discourse of the history of craft. She said she came because she was outraged at the idea of taking apart something that had so much labor built into it, she felt it was disrespectful. However, in doing so, we all realized how much we learned about the individual maker through the way the objects were pieced together. In short, the conversation was different than we thought it would be, and each participant spent more time in the gallery than I have seen with past projects of mine.

Transitioning that project to an educational space (and a gallery based in a women’s center) allowed us to have more philosophical conversations around the quilt. We made more comfortable seating because we knew people would spend time. And we created new works on paper in response to the un-making. It was interesting to see how different generations of participants would engage with the artwork, women in their 50s-80s, versus women in their early 20s.

As the projects move around the world do you find that the collaborative process changes with regional histories? Does that play into your interest in the history and politics of American History?

I suppose in that case it was generational more than regional, which points to the complexity of History (with a capital H). Whose history are we telling? If there are many overlapping Americas (and I think there are), how do we challenge the overarching narrative created through History? My projects are about creating space for individuals to find their place in the narratives of American History and perhaps begin to see where they can challenge those histories.

You collaborate with the groups “The Think Tank that has yet to be named” and “Like Riding A Bicycle”. I am very interested in your community-sourced research. How do you begin this practice? Do you feel it has an end or is it continuous?

Community-sourced research! Yes! I have been told I could talk to a brick wall (and I could listen to it too), so I suppose this is where that interest comes from. I really love listening to people’s stories, interviewing people, working with people.  When I was just starting out as an artist, I knew that I wanted to be able to work with people (and in particular people that might be different than me), but I did not have the skillset. I surrounded myself with anthropologists and community organizers to learn different methods of working with people that are different than me. There is no one way to begin community-sourced research, no one roadmap, but rather a series of tools that I might draw on in any given project. These include archival work, formal interviews, group conversations, attending community meetings, giving participants tools to annotate their own experiences through, and so forth.

Ethnography has no end, community organizing has no end, and for me, community-sourced research has no end. Rather, there are moments where I feel I am ready to reflect the research back in a project. However, I think each work influences the next (the same way a studio-based artist would talk about their studio practice) and as such, you see echoes of the process throughout.

Who/What are your biggest sources of inspiration?

This question is so hard! The author who gives me the most to chew on is John McPhee. He is a creative non-fiction writer who will talk about science through charismatic characters. He has the ability to make me care about things I would not normally be interested in. I am reading his three volumes on geology right now (and I should say when I took geology in school I really thought it was boring). I recommend Control of Nature or Survival of the Birchbark Canoe if you need some good reading.

As for artists, I really admire the work on Minneapolis-based collaborative group Works Progress. Their most recent project is called Water Bar, and it explores the myriad places that water plays in our daily lives (science, culture, safety, history).