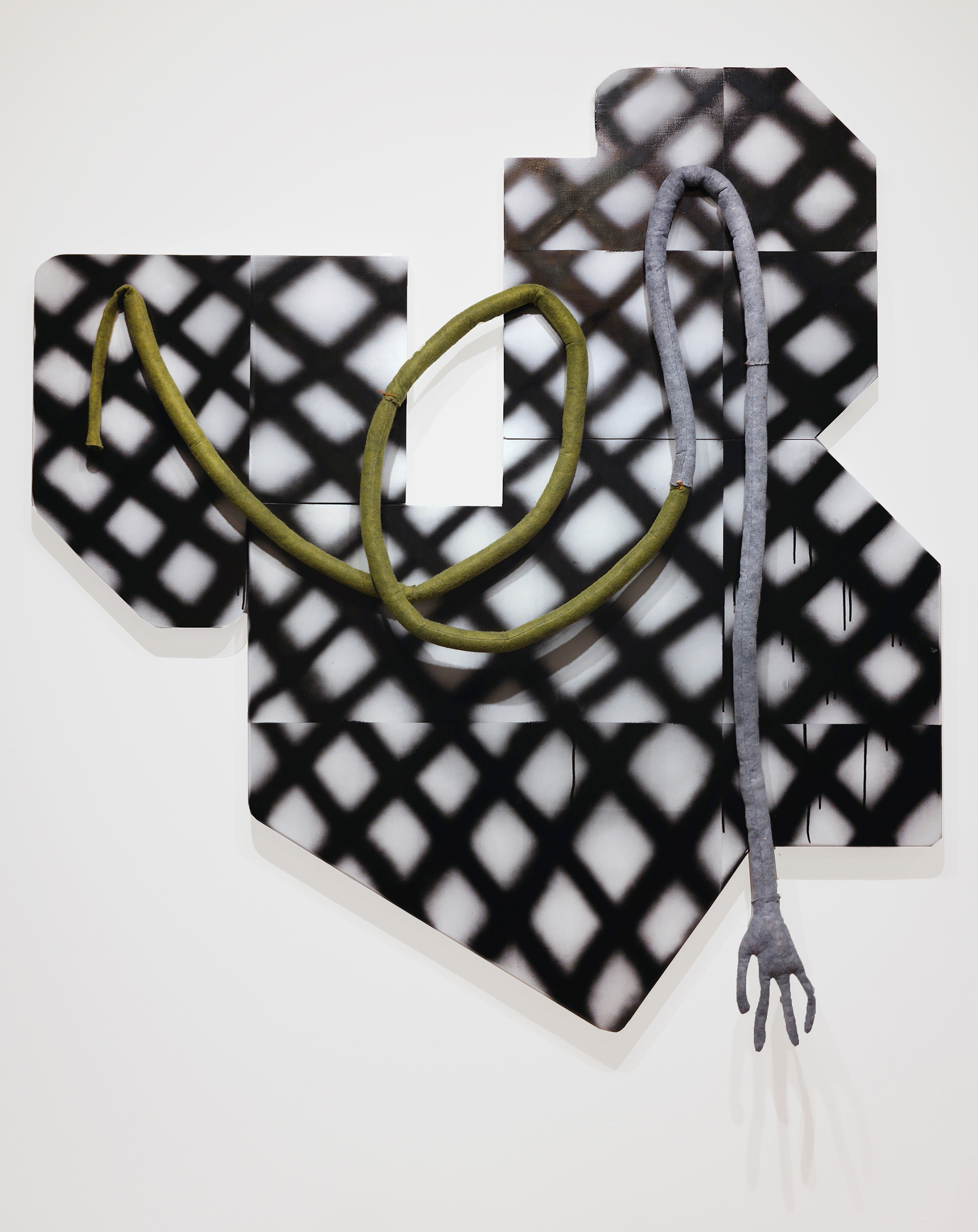 Marc Mitchell is an artist and curator based in Fayetteville, Arkansas, and my colleague at the University of Arkansas School of Art. This interview is excerpted from a longer conversation initiated in 2017, following his 2016 collaborative two-person show with Derek G. Larson, Nothing Ritually, at GRIN (then located in Providence, RI; now an independent curatorial endeavor based in Atlanta). Marginal Utility, a solo exhibition of Mitchell’s recent work, opens fall 2019 at Stonehill College, in Easton, Massachusetts.

SK: It seems like printmaking is a significant part of your process.

MM: It is. I often use printmaking as the catalyst or a foundation for a lot of paintings. It’s mostly just something to react off of, so it happens quickly. Not like traditional printmaking, where things are supposed to be registered well.

I used to paint a lot of my patterns by hand. I just don’t have the time anymore to do that. That’s a lot of the reason I’ve gone back to using silkscreen, since it’s such a time-saver.

When you were doing it by hand, were you were aiming at something that was borderline-absurd in the endeavor?

Haha… I guess so. No matter how hard I tried to be perfect, there was always fatigue in the hand. The patterns would end up being wonky, and I liked that. If you spent enough time with them, you would see the errors, but if you looked quickly, it might look machined.

That seems like a place for a useful tension to emerge. That, and that all this endeavor could be negated suddenly by a simple gesture.

It’s sad but true. I guess every painter to a certain degree does it in their own way. I would work for days or weeks on a pattern, only to put something over it that looks really quick, like a faux-gestural mark, or airbrush two thirds of it out. It’s sort of masochistic, but I like the struggle of doing it that way. 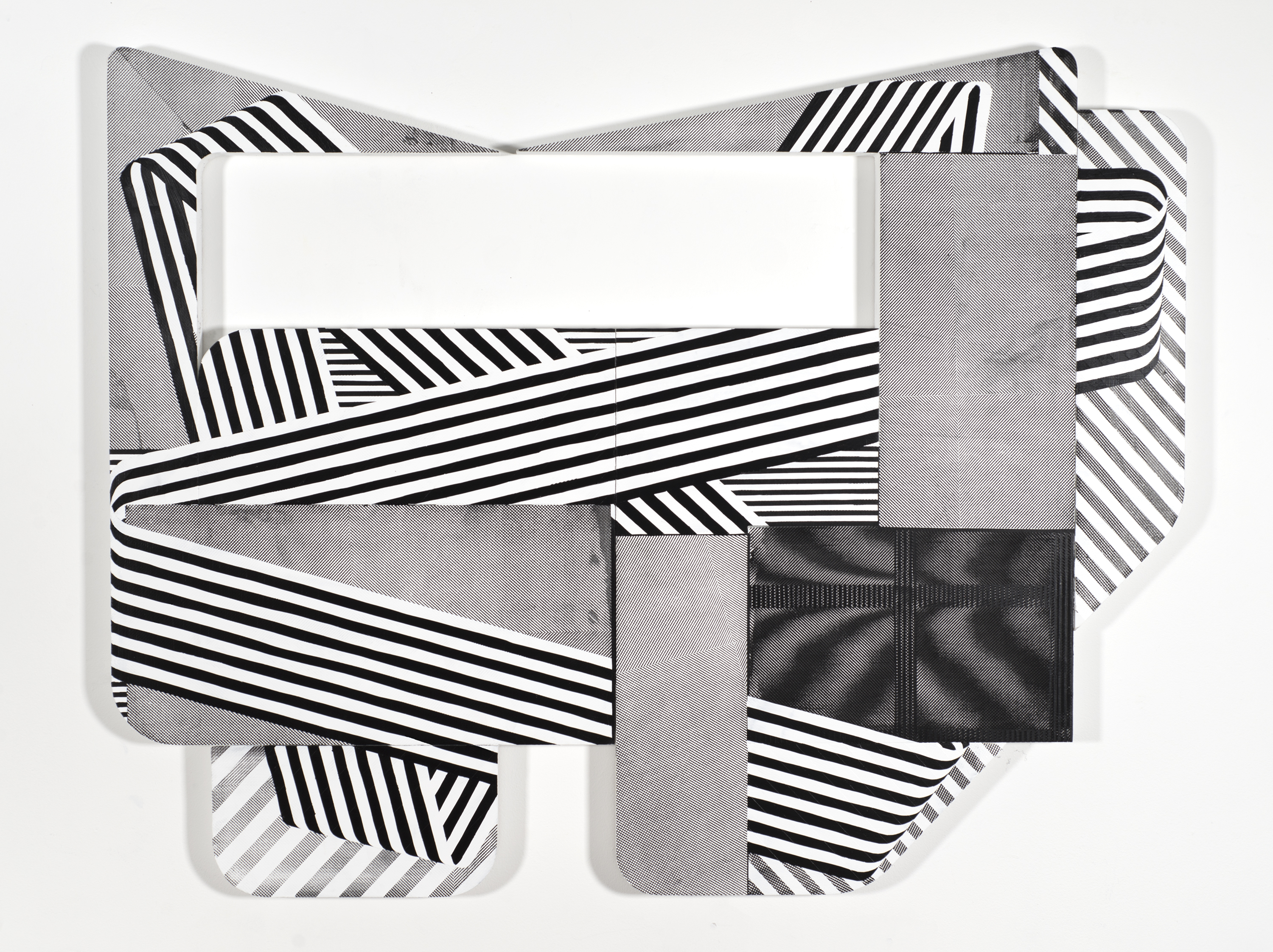 Your current work references “Dazzle” ships—this was a camouflaging for boats?

It started in World War I, with the Royal Navy. I believe the gentleman’s name was [Norman] Wilkinson. He was an artist who wound up in the Naval Reserve. Since the German U-Boats kept sinking their ships, he had this idea to paint their naval vessels with these outlandish patterns. At the time, they were using periscopes to see at distance. Wilkinson thought, if they could camouflage their boats in a way the U-Boats couldn’t recognize the directions the boats were going, or the distances, they could survive more attacks. It worked throughout WWI. The U.S. started doing it, too. It was short lived once it got to WWII. The technology on the U-Boats became more sophisticated.

Both Derek [Larson] and I were attracted to the camouflage. I was attracted to the patterning of these boats, and the idea that they were integrating avant-garde art movements into militaristic endeavors. The patterns were developed at the Royal Academy, by a special group that [was] primarily women, because most of the men were in the service. They did scale drawings that would get sent to the docks, and servicemen would paint them on the boats.

I loved that integration of awareness from Wilkinson (and the other artists) of what was hip and current, pushing the envelope in art—which at the time was Futurism, getting into Constructivism, Geometric Abstraction—all of that’s making its way into the military, and the general population is going down to the docks, seeing it, championing it.

It was a crazy kind of tension seeing your and Derek’s work literally commingled. I don’t know how else you could get this kind of contrast.

It was the first time we decided that every piece would be a true collaboration, a hybrid. I made a bunch of paintings and sent them all to Richmond. He was running the summer painting program at VCU. He was staying at Corin Hewitt’s house and had access to his studio, so we had a place to unpack them, hang them up, and look at them. I went up to Richmond for a week and developed a plan, and then I left. Derek finished executing that plan, and then he sent the work to GRIN. I gave him carte blanche to do whatever he needed to do the work—[like] put a nail in the middle of a painting to hang a stuffed arm!

After doing the GRIN project [in preparation for Image of a Rind or a Curtain Behind, a collaborative exhibition at Bloomsburg University], Derek and I agreed we didn’t want to do a complete hybrid. We worked off the idea of “screen,” both in the sense of your iPhone or computer, but also screen as a curtain, or screenprint. We liked the idea of what that could mean—multiple definitions of that word. We’re operating from this place that says, for me at least, camouflage, dazzle ships, pattern; a vehicle to confuse, conceal, organize.

How do you make decisions about color and composition?

Lately there’s been mostly black-and-white, from the dazzle ships interest. Prior to making that work, my palette was high key. Tons of fluorescents, everything was bright. When I was in grad school, I was making a lot of observational work. I would look at something over and over, that time-honored tradition of redrawing, repainting, simplifying until it was just light, form, shape. The light in Boston was very muted, inside and outside the studio. At the end of grad school, I started to integrate bold color. I got interested in playing painter’s tricks, seeing what I could get away with. Getting the exact value where it has that buzz, hurts your eyes. It’s been a thread since I finished in 2003.

I’m a vulture – I’ll take anything. I’m not above bottom feeding, reusing stuff that doesn’t work, doesn’t make it into other things. I’ve gotten interested in design, Bauhaus and such. Many years ago—2010, 2011, around the time Richard Prince vs. Patrick Cariou happened—I started thinking, where is that line, in terms of painting? Who owns a shape? I started making work that would openly copy forms that were from other artists, to see if I could strip them of time and place. For example, if I make a ‘Motherwell Elegy’ out of glitter paper, and put it on a 9”x12” panel with these colored duct tapes and faux zebra print, does it become something that’s mine?

There’s a painting at the Prado by Rogier van der Weyden, Christ Descending from the Cross, which is amazing. Most people clamored to Velezquez’ Las Meninas, but the van der Weyden floored me. It moved into the room. There’s this feeling I got—the way the skin was painted, all these things. How does he create these multiple channels for viewer information? The Christ figure itself is on this central panel that’s raised up a bit, but he’s falling into the room. In [a recent] painting, I have a scaffolding/grid structure. Up at the top, I wanted it to feel like it was tipping out, and at the bottom there’s all this weight. [There’s] this blobbish-looking form, that to me felt figurative, kind of hunched. I wanted an exchange between something calculated and mechanical, feeling like it’s playing with spatial tension, with this form that’s really rooted at the bottom. I don’t know if anyone would recognize it, but [the van der Weyden] is totally what I was thinking about. 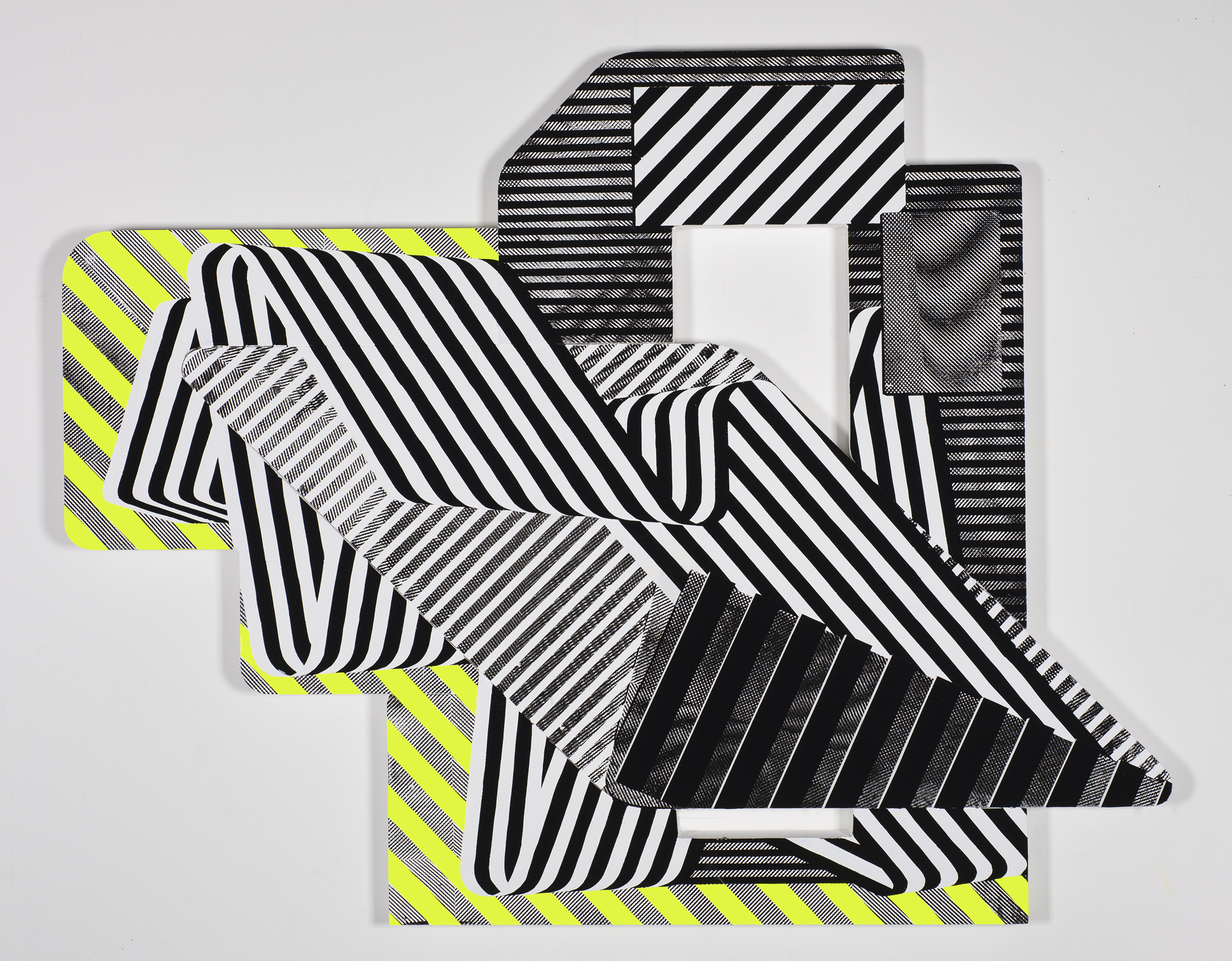 Marc Mitchell, Lost in the Light, 2018, 30×40 in. (irregular), acrylic and silkscreen on custom panels. Image courtesy of Marc Mitchell.

Do you feel like you’re in touch with the work you’re making now? That you’re in a place that’s built out of your experience—your particular filtration of all that’s out there in the world that you could take in?

I do feel like I’ve gotten to a point where I am invested, and they are representations of me. They are extremely organized, meticulous in some ways, but completely spontaneous, unplanned. You could look at one of my paintings and think “he’s got it all planned out” but almost everything in my paintings is intuitive.

Even working in my day job, running galleries and stuff, there’s this thing that’s structured—loan agreements, contracts, etc.—but when I’m putting together shows, that’s all intuitive. It could fail, in the same way making a painting choice could.

It reminds me of having studio visits with John Walker in grad school. Our conversations were rarely about work that was on the studio wall. I remember him saying to me—I’m paraphrasing—you know that you’re in a good spot with your paintings when you can walk into the studio and you don’t have to reinvent the wheel. You already know the start of your paintings. It doesn’t mean that it will be successful, or sustainable, but it means you don’t have to worry about the beginning. That’s what I spend a lot of my time doing: making sure that when I come into the studio to make work, I’m resourced. I have a bin of ideas or images that I can utilize. So far, it’s served me fairly well.

Sam King is an artist and professor based in Fayetteville, AR.