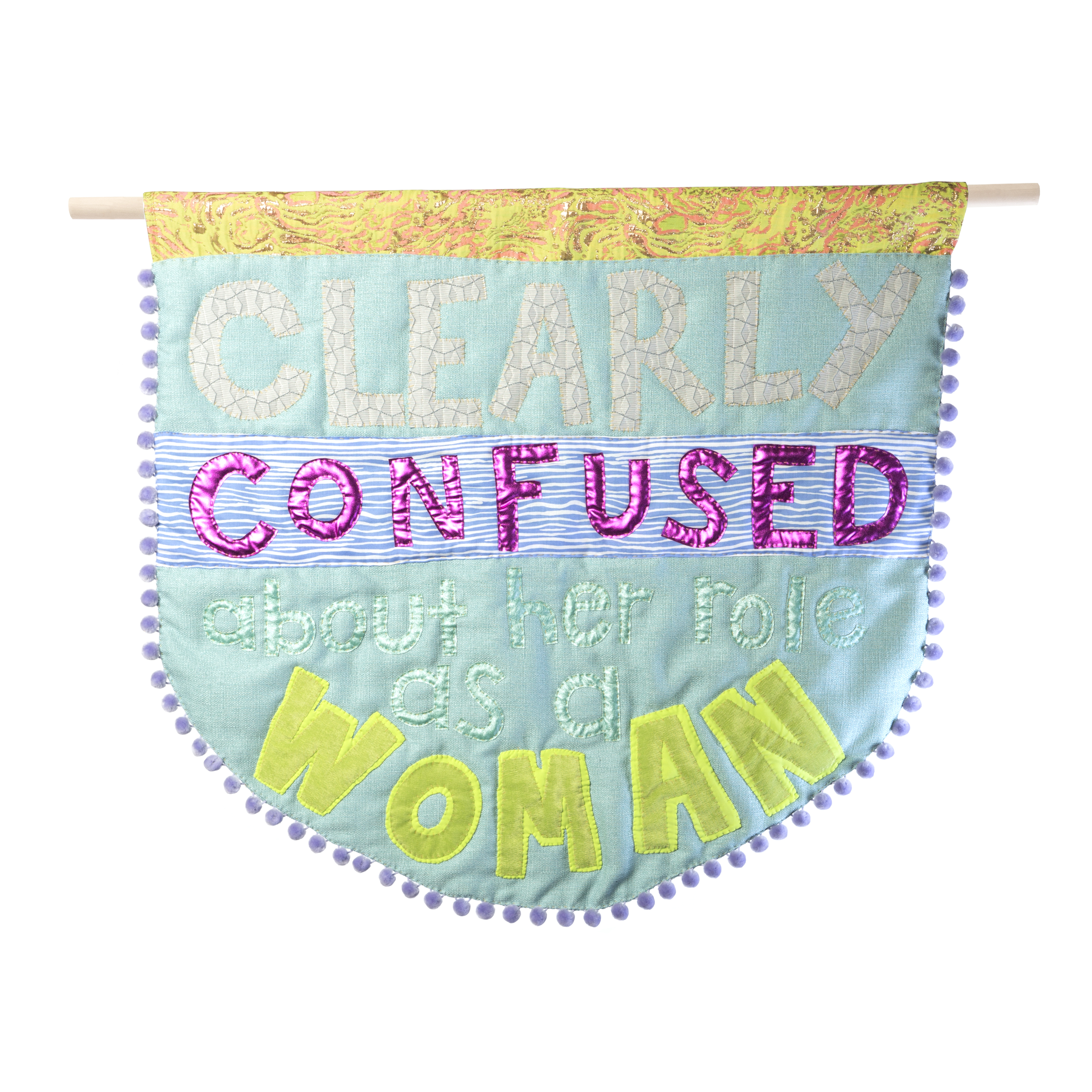 I met Natalie Baxter and her infant daughter Petra at her studio in Bushwick, just before the coronavirus crisis shut down New York City. When I visited, she was fresh off the Spring Break art fair, where her fabric sculptures of drooping firearms were featured in a solo booth curated by Lauren Wolchik, and she was preparing to deinstall another exhibition at the Allegheny Art Galleries at Allegheny College in Pennsylvania.

Baxter uses traditionally feminine craft techniques to create cartoonish soft weapons, bloated flags, and boldly fringed banners that skewer symbols of American masculinity. Her colorful work holds up a fun-house mirror to the aggression and dysfunction of our national politics. We talked about her process, her roots in Eastern Kentucky, and craft and community in the age of the internet.

Chase Martin: The gun sculptures that were just on view at Spring Break are probably your best-known work, but over the years, you’ve worked in a lot of different media. What was the impetus for starting to make sewn textile works in the first place?

Natalie Baxter: Yeah, in undergrad I made sculptures and video, and in grad school I got more into making documentary video. My mom’s family is from Letcher County in Eastern Kentucky, so I went there to make video portraits of women, including my grandmother, who was in her 80s at the time. She would talk about the way life used to be in the holler where she was born, and lived her entire life. I called that project Homeplace.

Anyway, I moved to New York after grad school and ended up working on a CBS show and some films for other people, but after a while I realized I was tired of sitting in front of a

computer screen all the time. I really wanted to use my hands and make something. The same grandmother I included in that video work also taught me how to quilt. She was always quilting and sewing. She was kind of the go-to person in her community to mend a dress or whatever. She was very precise, very exacting, which is not how I work at all [laughs]. I had a quilt with me in New York that she’d started but not finished. So I picked it up and started working on it.

Around that time, I went back to Kentucky—to Lexington—and saw a friend who had a whole wall of handguns on display. This was 4 or 5 years ago, and there was a lot of gun violence in the news, and the Trump election was ramping up, so there was a lot of national debate about guns and gun control. Seeing those guns on display made me feel uneasy. It occurred to me that if I had stayed in Kentucky, they wouldn’t have really fazed me, but it was jarring after being in New York. I was interested in how weird and foreign those guns felt to me, even though gun culture was something I’d grown up around.

I’d also just started quilting again, so I wondered what a quilted gun would look like. And that made me start thinking about these bigger questions of American masculinity and gender. Why was it always men behind these mass shootings? And I thought about quilting as this very American tradition that’s usually passed down on the female side of families, or at least in mine.

Both are such uniquely American phenomena. Quilting has a special place in the history of American craft, but we’re also the only industrialized nation that has this problem with gun violence. 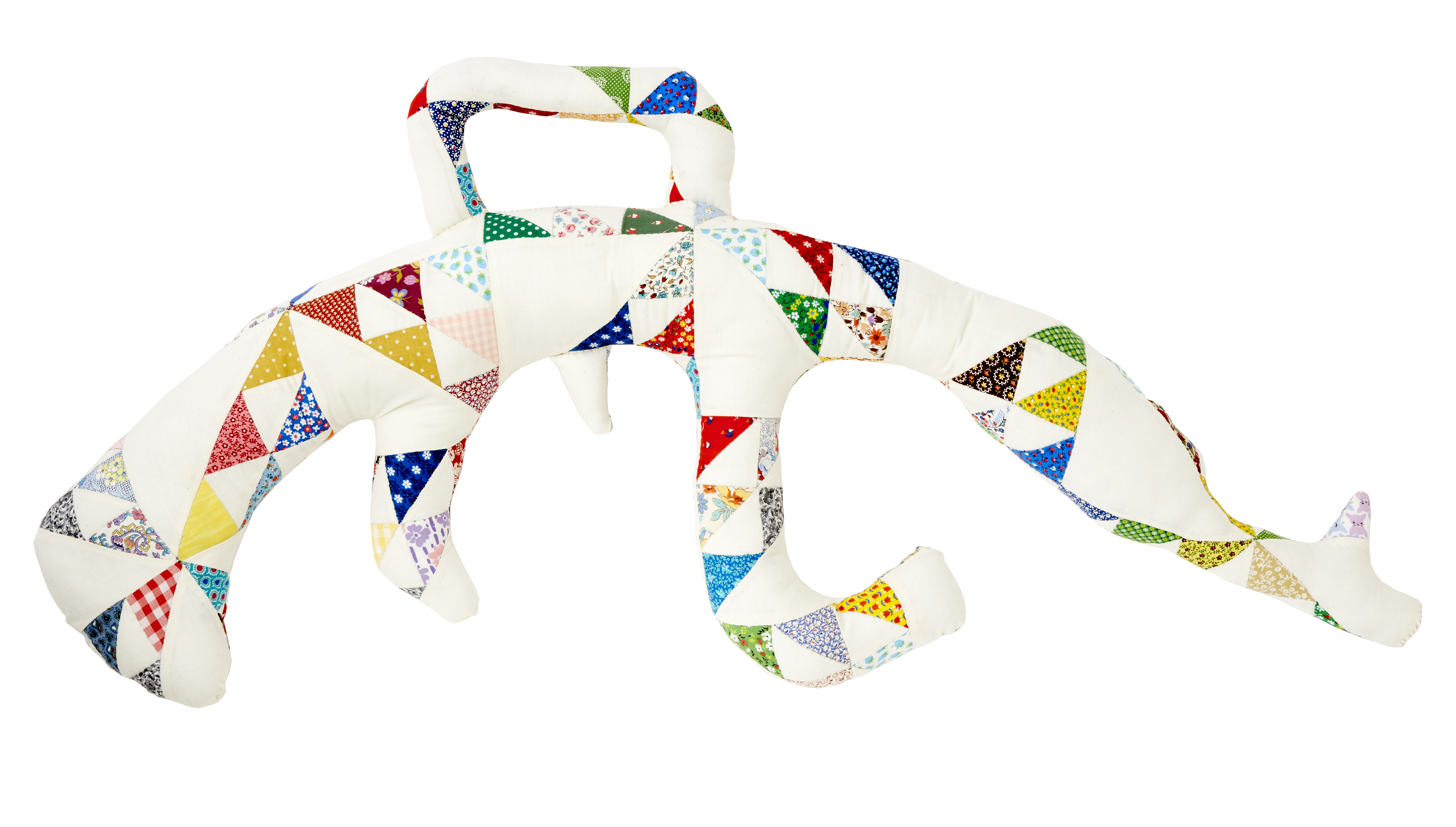 You mentioned that your grandmother was a very precise craftswoman. And of course her emphasis was on making objects that needed to be functional…

And she was also reusing scraps, fabric that was left over from things she’d sewn for other people. Nowadays people might just go to Wal Mart and buy a blanket to keep warm, but for a large part of her life, she was pretty isolated out on Kingdom Come Creek, and had to use what she had.

So when you’re making your work, what does the process look like from a technical point of view?

For the guns, they’re all loosely based on versions of actual weapons. The sculptures reference guns, but they’re not always obvious—they’re stylized and cartoonish. At first, sometimes people actually think they’re animals, like elephants or anteaters.

I use a disappearing ink pen to draw out a rough caricature of the gun and then use that to pattern and sew. They’re all free-style and hand-drawn—I don’t use a pattern or a template. I pick out lots of different kinds of materials and fabrics, and pair them together. It’s just how you’d create a stuffed animal, stitching the reverse side, turning it inside out, and stuffing it.

Some other pieces I make, like the flags, are more like quilts, they’re patchworked together and they have a backing that I stitch, but instead of a cotton batting, I stuff them so they’re bloated. 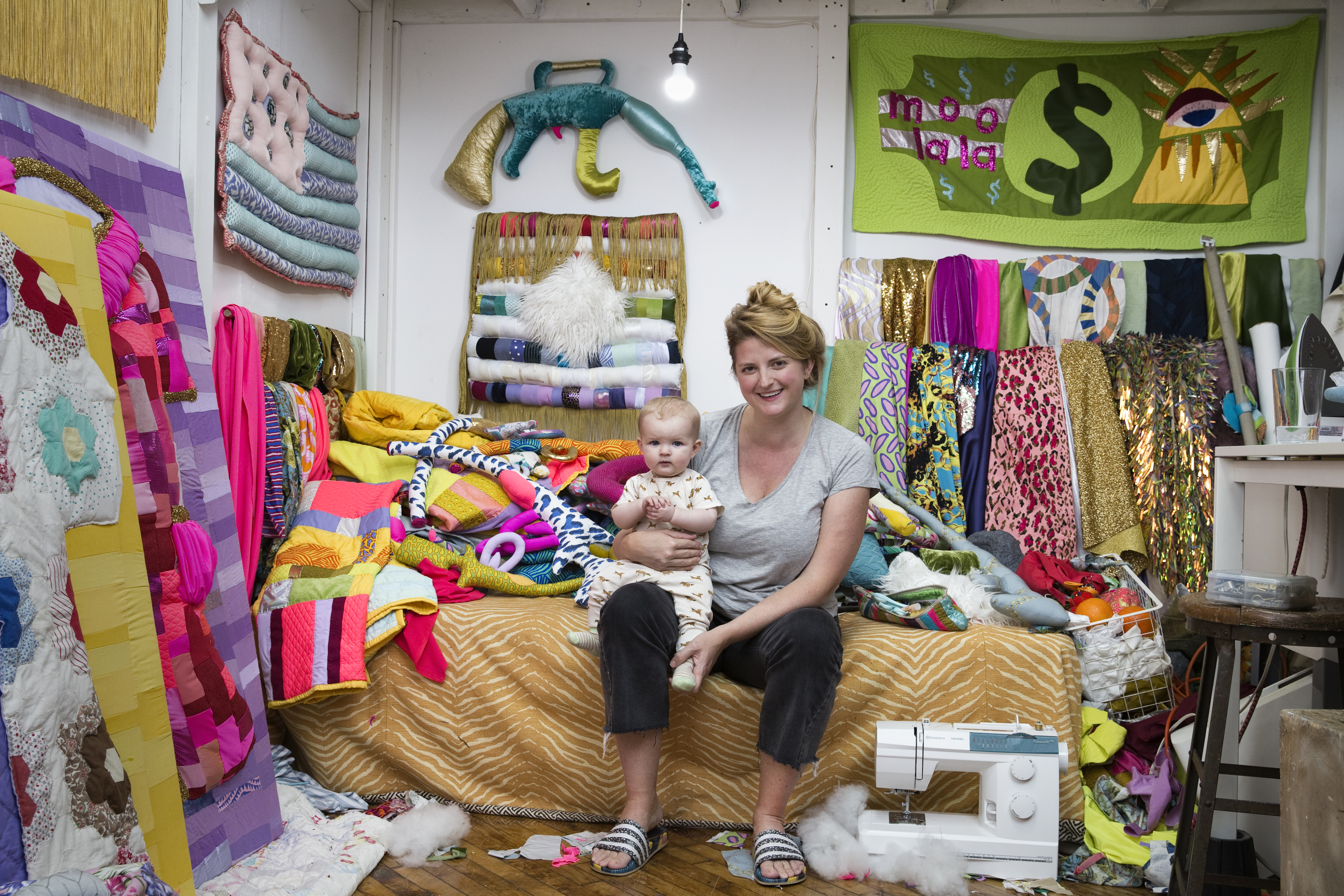 You spend a lot less time in front of a computer than you did when you were working in film, but like anyone in 2020, you’re on the internet a lot, and you use social media. Some of your recent work straddles those realms, incorporating comments from internet articles into banners and other objects.

Yeah, there was a Huffington Post article a few years ago about my work, along with some other pretty positive press. And around that time, someone sent me a link to another article on a right wing site called The Blaze with a title that was something like “Feminist Artist Takes on Toxic Masculinity in Gun Sculptures,” and the gist of it was “look at this ridiculous woman.”

My work walks this line of not being overtly one-sided—not saying all guns are bad, but still trying to point critically at our country’s cuddly relationship with weapons. I’m not trying to just preach to the choir, but these guns are part of an investigative sort of exercise, and the article was poking at that. Anyway, there were about 95 comments on the article, and I thought I probably shouldn’t read these, but…

God, who can resist?

A lot of them were pointing at my gender, my sexuality. One of them said “clearly Natalie Baxter is confused about her role as a woman.” And I thought, because I sit around and quilt all the time? Ok, dude. Another one called me a Feminazi with no redeemable qualities, not to mention no brain.

It was really a lot of the same aggressive masculine energy I was exploring with these impotent-looking guns in the first place. A lot of my research was coming out in the comments. So, I turned some of them into these banners that echo the design of suffragette banners from almost exactly a hundred years ago. I wanted to bring these internet troll comments into a context that reflected that past of fighting for equality.

It makes me think too about the idea of community in general. So many aspects of our lives are mitigated by technology and filtered through social media. Sure, there are plenty of people who make quilts as a solitary activity, but for a long time they were a community exercise. People got together and made them as a group…

You don’t have a quilting circle…

No, but my grandmother would go to the Letcher County Homemakers Club, and I went with her once. I actually still have a blue ribbon for a quilt we made that won first prize. I framed it. That was a big part of her life. That’s where she would go to get gossip, to get news.

And now, for better or for worse, that’s the internet.

Yep. The quilting bee was the original Facebook group.

Chase Martin lives in Brooklyn and works for the Aperture Foundation.