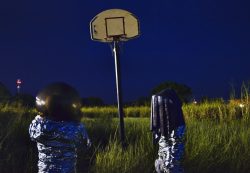 Through his performances and participatory-installations, Trinidadian-Toboggan artist Luis Vasquez La Roche presents a mirror onto our world, raising pertinent questions on the historical and future realities of colonialism and labor systems. To unpack these complexities, I spoke with the artist on his methodologies and practice.

Since researching the Slave Registry of Trinidad and Tobago, Vasquez La Roche has centered his practice on the Transatlantic Slave Trade and its residual manifestations in the contemporary world – from labor, death, erasure, oppression, to violence and discrimination. He often employs materials with historical ties to the slave trade, such as palm oil, gun powder, and lemon juice, as innovative means to articulate violent, traumatic histories beyond a purely optical, visual representation. In the words of the artist:

“Some of the materials I have been working on in the past couple of years, like palm oil or gunpowder, have really intriguing histories. Palm oil is originally from West Africa. Ships would transport enslaved Africans and palm oil, which was then taken mostly to Europe and some to the Americas. The use of [palm oil] would range from foods to machine lubrication. Some books show the increase in demand in the 1800s to the point that Dutch investors introduced the African oil plant to Indonesia to create their own plantation production. Presently, palm oil is used on most of our products from “pizza, doughnuts and chocolate, to deodorant, shampoo, toothpaste and lipstick.” It is also one of the major drivers of deforestation.

There are different stories about gunpowder. Some say that it was introduced to Western Europe in the 15th century. What is also interesting about it is that 2 out 3 components that make gunpowder are consumed by humans. The history of these two materials is dark and complex. To use them is to wrestle with their history and current uses.” 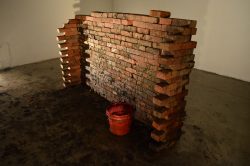 Still of performance of Bricks, Palm Oil, Gunpowder, and Lemon. Photo courtesy of the artist.

This focus on materiality affords Vasquez La Roche the flexibility to create malleable, evolving material-based sculptures and performances such as Bricks, Palm Oil, Gun Powder, and Lemon (2020) as well as The Impossibility (2020). In directly engaging with materials – either by the artist himself, the collaborators, or selected audience members – each of these performances inspire critical dialog on systems of labor, specifically the confrontation of Virginian history and its roots to African and African American enslaved labor. Bricks, Palm Oil, Gun Powder, and Lemon, a performance in which white men are individually called upon to construct a wall made from the title’s materials, reverses the power and labor dynamics between the cultural groups who historically founded Virginia. The red clay bricks, derived from the sidewalks of the Commonwealth, not only allude to colonial Virginia’s architecture and its white tenants, like Thomas Jefferson’s Monticello and the University of Virginia, but also the people of color who laid down the bricks. This allusion continues via the binding mixture of palm oil, gunpowder, and lemons – substances used on enslaved Africans and African Americans to heal their wounds from prior abuse and later prepare them for staging on auction blocks. In the simple act of reversing labor roles and encouraging engagement with a particular, yet symbolic object, Vasquez La Roche redresses the often racialized delegation of labor and power.

Installation still of The Impossibility. Photo courtesy of the artist.

The Impossibility, which uses the dismantled remains of the previous piece, similarly underscores the legacy of systems of labor. The performance involves constructing a monument from the same found-bricks, lemon juice, gun powder, and palm oil – the latter materials casted in the form of the artist’s body and face. These anthropomorphic castings, stacked atop the brick pedestal to impart a sense of piled bodies, metaphorically pay tribute to the historical experiences of people of color and their contributions of labor. The fusibility of these figure-based materials also suggests the erasure of non-white narratives from representation in public art landscapes, and simultaneously challenge the implied permanence behind notions of monuments and memorialization. Initially, The Impossibility was intended to be individually performed by Vasquez La Roche; however having not accounted for elements like weather and exhaustion, he called upon fellow artists John Chae, Bryan Castro, and LaRissa Rogers for assistance – a gesture that helped accent the invisible or undocumented acts of labor by people of color throughout time. In both of these performances, materials serve to credit the cultural narratives lost and overlooked in readings of history, and speak to both the visible and invisible systems of labor.

Performance still of The Impossibility. Photo courtesy of the artist.

Not only does the artist pay mind to the materials he engages with, but also the selected spaces. In his works OYA-9394 and Canchas de Algodon de Azucar, Vazquez La Roche examines historical sites rooted to white colonialism, such as the Richmond’s Slave Trail and Trinidad’s abandoned sugar plantations, and the sites’ transformations into current urban development projects and razed, desolate fields.

“I think the curiosity that I have for materials, images, books, and stories of my family is the same curiosity that I have for space. I live in Trinidad and Tobago, close to an extensive piece of land covered with sugar cane. Not too far away, there is an abandoned sugar factory called Brechin Castle, which has been empty since 2003. I have walked and ran along that area, and every so often I encountered a cotton plant. Trinidad was a Spanish colony from the late 1400s to the early 1800s, then became a British colony. “The crop one found here was not sugar, but cotton”. Every time I am in that area I have so many questions about what happened in these fields.

Similarly, I think about Richmond and Virginia. Some histories are visible and some are hidden in plain sight. It’s not only about the things that we are yet to learn or uncover,  but also the things that are happening in real time. For OYA-9394, one of the reasons why I decided to walk the Richmond Slave Trail was not only for the significance of the space, but also because how the landscape changes from trees, dirt trails, to an underpass below Interstate-95 – which also cuts through the African Burial Grounds …The Richmond Slave Trail, people can walk it and there is a bike trail. At times there are folks who play soccer in the Richmond Burial Grounds. And close to the same sugar cane fields in Trinidad that I mentioned earlier, there is a cricket/soccer field.

Witnessing the continuation of the past into a dystopian present, Vazquez La Roche cannot help but to imagine an uncanny future. With recent developments in Martian space exploration and their eerie semblance to colonialist campaigns, the artist questions the repetition of history and his place within this new world. For OYA-9394 and Canchas de Algodon de Azucar, he applies a futuristic lens to historical areas tied to memories of trauma, violence and sacrifice – an approach inspired by his research on Afro-futurism – and wanders along in a celestial space suit for protection. Titled the OYA suit, this armored suit made from materials at the artist’s disposal has had several iterations, ranging from fabrication out of chemical-resistant overalls, waterproof backpacks, acrylic dome-helmets, to survival blankets and aluminum tape.

Performance still of OYA-9394. Photo courtesy of the artist.

“The OYA- 9394 suit makes me hyper-visible. When I am without it, I adopt ways of surviving and blending in – I constantly question the way I dress, the way I speak, and the words that come out of my mouth. Focusing on the idea of a dystopian future, I consider the OYA suit a type of armor, a protective suit made with materials that I can find and made with the technology available on earth. I do not have the means to leave Earth but others do. I think about space exploration as something that is meant to benefit mostly white folks–people with wealth and power. But the day they depart Earth, there will not be much left for me here. I will need to develop further methods of survival…

One of the reasons I continue to think about different versions of OYA-9394 is because I don’t think white supremacy, patriarchy, capitalism, and the people who uphold these systems will ever relinquish power. I do believe I need to prepare for a future earth where I would need to wear a suit…For me it is difficult to imagine utopian futures when I look at the present and my immediate past. OYA-9394 is commenting on both past and present and summoning a dystopian future. “

Quite astutely, Vasquez La Roche offers an unfortunate, yet undeniable possibility for the future. While his works pertinently investigate how systems of injustice are continuously reproduced throughout time and disproportionately affect people of color, they encourage us all to critically reflect, adjust, and act to prevent such a fate. Above all else, Vasquez La Roche inspires us to ask when looking into the future from our past and present moment:

“How have we upheld white supremacy, the patriarchy, and systems of oppression throughout time? Are we learning or are we just repeating things in a different way? How can we shift towards creating more sustainable systems and break this cycle of history,  one where only a few benefit at the expense of others’ labor, health and lives?”

Performance still of OYA-9394. Photo courtesy of the artist.

Haley Clouser is an independent curator based in Richmond, VA, where she also works as an Exhibitions Research Assistant for the modern and contemporary art department at the Virginia Museum of Fine Arts (VMFA). Her practice focuses on decolonial practices; institutional critique; the role of history and the archive in contemporary art; materiality in relation to capitalism and labor systems; gender studies and queerness; environmentalism; as well as experimental curatorial approaches. Previously, Haley served as the Samuel H. Kress Interpretive Fellowship (2019-20) at VMFA and has worked at institutions like the Smithsonian American Art Museum, the American Civil War Museum, among others. In 2018, she presented at the University of Oregon’s “Contested Memories” research symposium and the International Council of Museums’ (ICOM) conference in Barcelona, Spain. She has also published academic papers and critical art reviews, as seen with her article “Whose R-Evolution?” in Burnaway Magazine (2017). Haley has assisted in mounting numerous institutional group exhibitions nationwide, and has independently curated solo and group exhibitions across Virginia and in New York City, NY.

Luis Vasquez La Roche (b.1983) They hold a B.A in Visual Arts from the University of the West Indies and an MFA from Virginia Commonwealth University. They have exhibited work and performed in institutions such as Field Projects in NY, ICOSA in Austin TX, Denison Art Space in OH, Deakin University in Melbourne Australia, La Vulcanizadora in Bogotá Colombia, MCLA Gallery 51 in MA, Fresh Milk in Barbados, Alice Yard in Trinidad and Tobago, LACE in Los Angeles CA and the Institute of Contemporary Art in Richmond VA.

They were selected as a resident for  OAZO Artist in Residence in The Netherlands in 2013 and Beta Local’s 2016 Itinerant Seminar in Puerto Rico. In 2013, co-founded See You on Sunday, an artist collective committed to arts education. They are the recipient of the Fulbright scholarship in 2018. They have  taught at Virginia Commonwealth University and is currently a full-time lecturer at the University of Trinidad and Tobago.