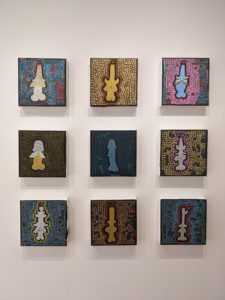 as seen by Jon Sewell.

Foreskinned, Five-skinned, bat-skinned. 4 cocks with faces snake-like emerging from a feline feminine figure with 6 breasts. Sometimes you come into the gallery, sometimes the paintings come on you. You’re in there for the view and it’s immaculate- conceiving a new world.

These cocks represent a spectrum of humanity, often separated from their human holder. “Dismembered members” as curator Daniel Fuller points out. They become human- neither exclusively masculine nor feminine, or not even necessarily human, as it turns out. 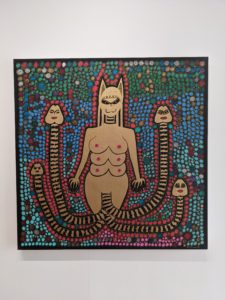 What else would you expect from Jayne County, whose autobiography “Man Enough to be A Woman” helped convey the humble origins of a poor outsider born Wayne Rogers in the rural setting of Dallas, Georgia. Gender non-conforming from early on, Wayne Rogers becomes Wayne County (a name influenced by the Detroit energy of the day) to front several proto-punk avant garde musical projects, playing all the notorious clubs of New York, then later London and Berlin. It was in New York, where she rolled with Warhol and the factory scene there performing in numerous plays and writing her own “World – Birth of A Nation (The Castration of Man)” which includes a riveting scene where John Wayne gives birth thru his butt while sniffing poppers. From her participation in the Stonewall Riots to helping birth punk rock, the ride of Jayne County has never stopped being culturally impactful.

Are these canvas cocks castrated? Some seem so, some clearly not. Are we viewing them from the floor looking up or from above looking down? Some are clearly face-on, having transformed into entities in their own right, alive, even “wise” in one depiction (“Three Wise Penises”). Anthropomorphized or gynemorphed- attached to feminine forms some (“She 6 Cocks”,”Gold Bastat Caliggar #47”), others with animal elements: features of bats (“Bat Cock”), webbed feet, and even some multiples together crossing double headed (“White Penis Op Art 2006 1/3 = 66 No Vat”).

These cocks speak a language that may be outside an existential duality, embracing an all-of-the-above standpoint.  As curator Daniel Fuller points out, “County’s stand-alone phalluses serve as carriers, transporters of meaning… a new pictographic language, a subversive radical nonverbal voice.  ”

In that vein, pictures don’t do them justice- shiny resplendent color palettes that play with light and pop out at the participant-observer in a way that a 2d photo simply can’t convey. Walking by Jayne’s cocks- they glisten, shine, reflect light from their hundreds of colorful dots, cut testicles, and golden shimmer. Even “Cock Strong” a small 12×12 that stands apart aesthetically from the rest has glowing neon colorplay that shoots out at the viewer in person. These pieces need to be seen to be admired and enjoyed. Meeting with the Gallery director, Ryan Filchak, enjoying a beer after a 3hour car drive, our discussion repeatedly returned to the lightplay- looking down the wall with the natural light playing off the canvases invites you to check out new perspectives. Looking up from below, I’m just a supplicant at the shrine – enjoying the view as the color plays differently- the natural light thru the storefront windows meeting the gallery track lighting from above. Melding, mixing, making a new world. Not just of the conceptual conversation but of the canvas representations themselves. We noticed that pictures tended to flatten the visual brilliance, reminiscent of the difficulty in taking a picture of glow-in-the dark. Seeing these in their full on glory requires in-person participation. 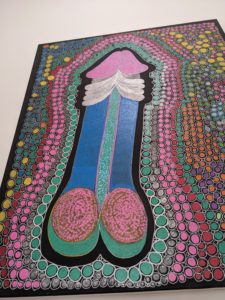 That required realization helps contextualize the life of Jayne County- a participant in some of the major countercultural movements of our times, sharing her inclusive resplendent shining visions with the world. 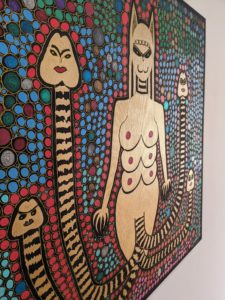