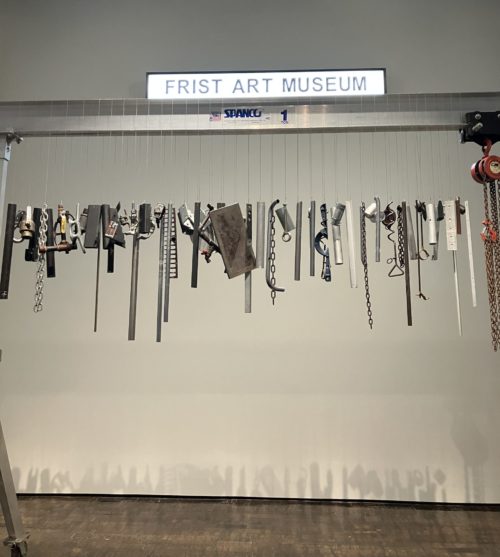 With comments by Desmond Lewis and Marc Scala

On the occasion of Saved, a solo show of work by Virginia Overton 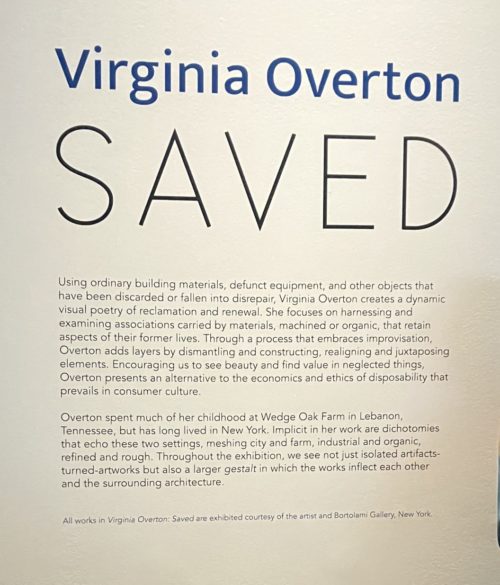 What did I know, I asked myself. What did I love? – Anne Truitt, Daybook

You choose the material at a time when that’s the material you want to use, and then you develop your processes so when you put things together it gives you a sense of satisfaction. – John Chamberlain

I was living in Boston when a friend first introduced me to Virginia Overton’s work. Though we share a relationship to the rural vernacular (and Tennessee), it is her reviewing of formalism that sustains my interest in her projects. Ms. Overton’s work, shown in the three modestly-scaled contemporary rooms at the Frist Art Museum, is in step with her larger practice. Her work is rigorous, rooted in history of making, and yet somehow egoless, confident, minimal and deeply felt. It is my pleasure to have gotten to meet her this fall and conduct an interview. Thank you to Mark Scala and Desmond Lewis for your thoughts. And thank you to Virginia for your openness to this interview, even with my sons.

JH: When did you “make” your first piece of “art” and what was it?

VO: That’s almost impossible for me to answer. It’s sort of like something coming into focus, you work on it and hone it and then at some point it gets there. But just because it comes into focus does not mean it can be on cruise control…you have to constantly nurture it.

(on the Whitney museum piece truck)-where did you find the items to put in the truck?

VO: The sculpture at the Whitney Museum is a single truck and all of its components. I originally made this work in Switzerland, where I bought the used Toyota Hilux pickup truck then took it completely apart. Once the vehicle was in separate pieces, I loaded it all into the bed of the truck to make the sculpture. I had to use a crane to get heavy pieces like the chassis and the engine in place, but mostly we did it all by hand. Every time the sculpture is reinstalled, it is a bit different than before, but the big parts help define where the smaller components can fit in the truckbed.

(Jodi: Whose trucks do you borrow, I know the one in front of Marshall Arts was yours, right?)

VO: Sometimes they are mine or borrowed from friends, but often I buy used trucks I find online or out in the world as I move around. The one at Marshall Arts belonged to a friend who lived in Virginia at the time. I wanted the license plate to have my name on it, so I borrowed it for that installation.

Where are you looking for inspiration?

VO: Everywhere! One thing I try to do as I move around in the world is keep an open mind and open eyes. I never know what is going to speak to me nor when. And sometimes I don’t even know that something has registered in my brain until later, when I’m thinking about what I have seen and experienced. The great thing about art making is that almost anything can be a springboard for creating. What I find most important is taking the time to engage in the process. 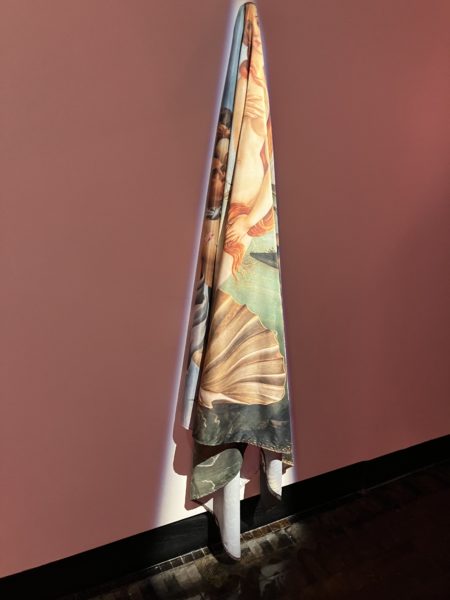 JH: In the recent Tim Griffin ArtForum piece, he connects your use of material with a nostalgia or loss, related to a rural vernacular. How does this sit with you?

VO: Everyone brings their own experience to the conversation. Tim and I have known each other for years. I would guess that his understanding of my work is rooted in his own experience and his particular ways of looking but we’ve also had numerous conversations about art, my art and many other things in the world. I might come by a ‘rural vernacular’ honestly because I grew up in the rural south, but there are many more entry points to my work because I have moved around and tried to look at my ideas and consider things from varied perspectives. The facets are many and Tim touches on this in his essay as well.

JH: Charles Ray, in a recent Brooklyn Rail interview, said “for me, sculpture is a behavior rather than a practice.” It makes me think of CD Wright’s famous statement:

“I poetry. I write it, study it, read it, edit it, publish it, teach it. Sometimes I weary of it. I could not live without it. Not in this world. Not in my lifetime. I also arkansas. Sometimes these verbs coalesce. Sometimes they trot off in opposite directions.”

How do you most like to think of making, thinking, “sculpturing”?

VO: Making sculpture is all of the things. By which I mean it takes many different approaches to do it. Often when I am engaged in it, it is performative. It can also be contemplative, collaborative, architectural, messy, slapstick, physical, painful, relaxing, challenging. 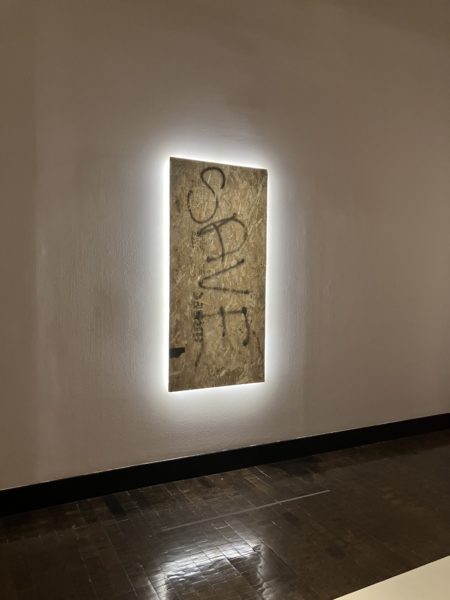 JH: (to Mark Scala) Virginia Overton’s work has been shown  consistently all over the world. Can you tell me how situating the work back in her home state, and at the Frist Art Museum  expands reach and/or context around it? In short, why the Frist, and why now?

MS: Our focus is on showing artists from around the world whose work might broaden the way we think, see, and feel, offering an experience of beauty and truth that overcomes cultural differences.  Over the next year, we will present a Nigerian artist working in Belgium who addresses postcolonial and capitalist legacies of extraction and a London-based painter from Kashmir who synthesizes east and west through a shared quality of opulent sensuality. Like these artists, Virginia Overton occupies an intersection between places, geographical and psychological. Originally from a Tennessee farm family, Overton now lives in Brooklyn. This dual identity shows up in her work. She bridges south and north, urban and rural, and agricultural and industrial, dualities that these days signify cultural division, even antagonism.  But by imbuing neglected or discarded objects with a new life, she pursues a kind of democracy of associations, accessible to any viewer who has seen beauty hidden where it is not expected (I like to think this is almost everybody). That she is from Tennessee, and that right now that split is evident in conflicts between urban areas like Memphis and Nashville and the rest of the state, makes this work pertinent now more than ever.

JH (to Desmond Lewis): Talk about Virginia’s work related to yours.

The work being shown in the Triennial definitely broaches a more experimental realm similar to the way the Virginia works with found objects. There’s an element of Southern/American Culture that Virginia embraces that I really enjoy. I admire the way that she pushes material boundaries, but still maintains a somewhat recognizable relationship to the material origins. I’m starting to explore using found objects and sound more in my work to approach my subject matter from a different angle. Sculpture is constantly derived from experimentation and I believe Virginia and I embrace that process within our respective practices. 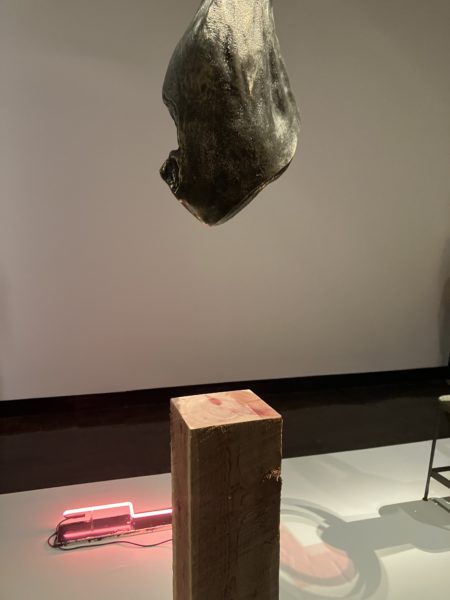 Virginia Overton earned her bachelor of fine arts and master of fine arts degrees from the University of Memphis. She has had solo exhibitions at Kunsthalle Bern in Switzerland; Storm King Art Center in New Windsor, New York; and the Whitney Museum of American Art in New York City. In 2018, she became the first woman to have a solo show at New York’s Socrates Sculpture Park. This year, she had a solo exhibition at Goldsmiths Centre for Contemporary Art in London; installed a permanent site-specific installation at LaGuardia Airport in Queens, New York; and is included in the 59th International Art Exhibition of La Biennale di Venezia, curated by Cecilia Alemani, in Venice, Italy. She is represented by Bortolami Gallery in New York City, White Cube in London, and Galerie Francesca Pia in Zurich.

Desmond Lewis is a sculptor who was born and raised in Nashville, TN. Lewis received his AA from Bard College at Simon’s Rock in Great Barrington, MA in 2012, BS from Tennessee State University in Nashville, TN in 2014, and MFA from The University of Memphis in 2017. Selected group exhibitions include Current Collapse at Ruddell Gallery in 2017 in Spearfish, SD, Price is Right at David Lusk Gallery in 2017 in Memphis, TN, Equality Matters at Mildred Cox Gallery in 2017 in Fulton, MO, and The Collective Presents Liberation at the Clough-Hanson Gallery at Rhodes College in 2018 in Memphis, TN. His public and private collections include the Penland School of Crafts, Carolina Bronze Sculpture Park, City of Lenoir, NC, City of Hickory, NC, Vermont Carving and Sculpture Center, The University of Memphis, Soulsville USA, NexAir LLC, Skowhegan Parks and Recreation, and the Stax Museum of American Soul Music. In 2017, he was named one of the 100 Interesting and Influential People of Memphis. His residencies include the Pittsburgh Glass Center (2018), Skowhegan School of Painting and Sculpture (2018), Haystack Mountain School of Crafts (2017), and the Vermont Carving and Sculpture Center (2016). His studio is based in Memphis, TN and New Haven, CT.

Jodi Hays is a painter who exhibits widely across the United States. Her work explores the material vocabulary of the American South through reclaimed and repurposed cardboard, textiles, and fabrics. Her work has been shown at the Wiregrass Museum, Stoveworks Museum, the Brooks Museum, Labspace, Fisk University, Curb Center at Vanderbilt University, Boston Center for the Arts and Cooper Union. She is the recipient of grants from Sustainable Arts Foundation, the Individual Artist Fellowship from the Tennessee Arts Commission, and the Elizabeth Firestone Graham Foundation. Residencies include The Cooper Union School of Art and Vermont Studio Center. Her work is documented in catalogs and has been published in New American Painting and Hyperallergic, and positively reviewed in publications such as ArtForum International, New Art Examiner, Number Inc. Magazine, the Nashville Scene and Two Coats of Paint. Her paintings can be found in many public and corporate collections including the Birmingham Museum of Art, J Crew Group (New York), Nashville International Airport, National Parks of America, Gordon College (MA), the Tennessee State Museum, among others. Her work has been seen most recently in a solo exhibition at Night Gallery, Los Angeles and Susan Inglett Gallery, New York City. Her studio is in Nashville. 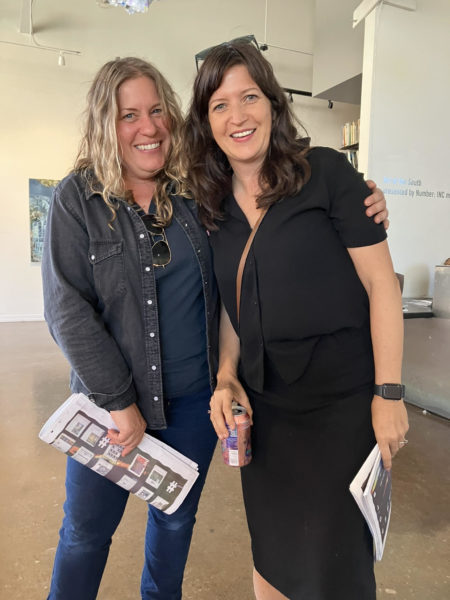