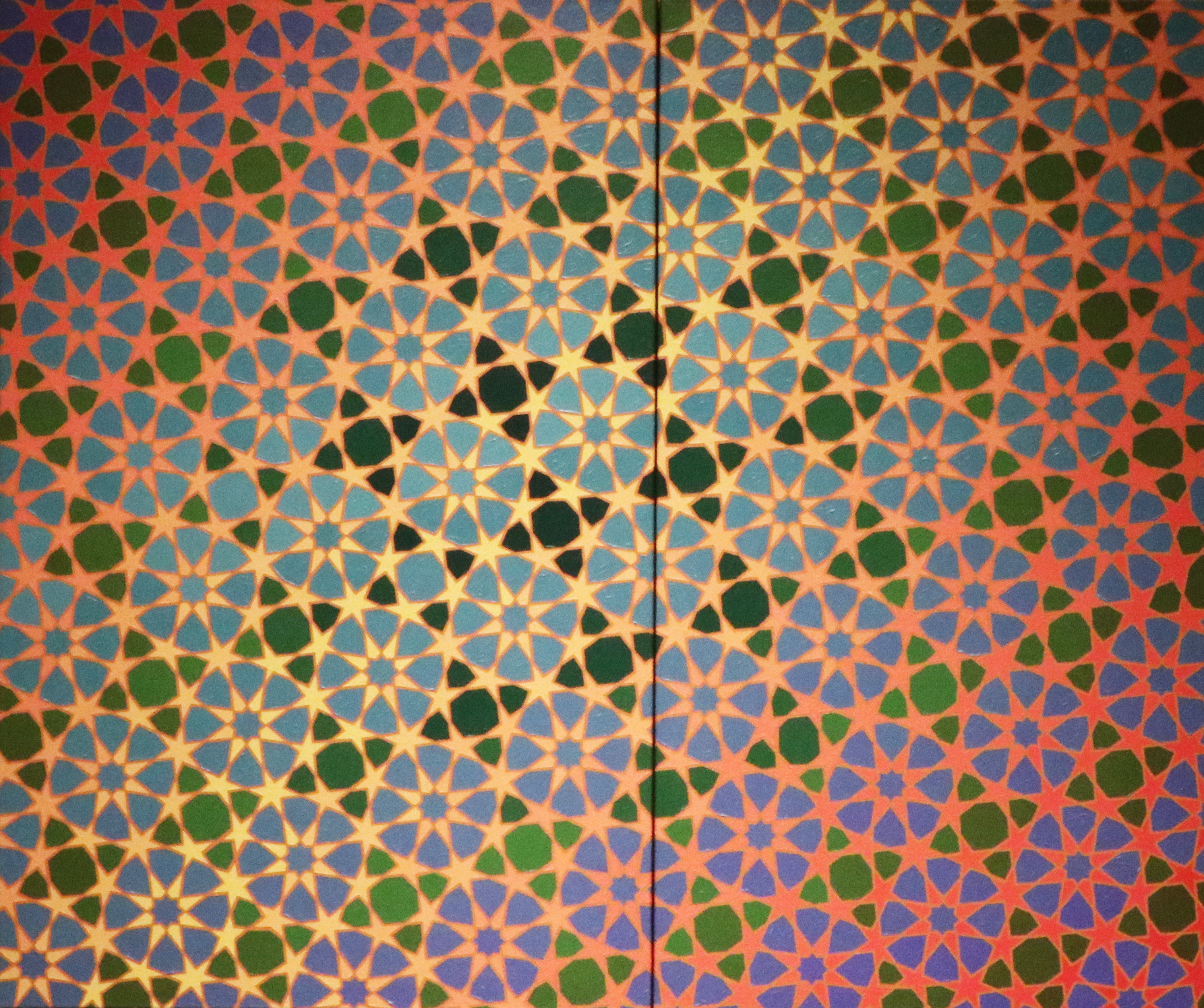 The Juanita Harvey Art Gallery is housed at Midwestern State University’s Fain College of Fine Arts in Wichita Falls, Texas; the only public liberal arts university in the state. The Juanita & Ralph Harvey School of Visual Arts and the gallery were established in 1978. The mission of the gallery is to serve as a teaching gallery and provide exhibitions by mid-career and established artists while seeking content that is responsive to issues relevant to the university’s liberal arts mission. Since 2010, Edith and Peter O’Donnell have generously provided funding for all artists that exhibit at the Juanita Harvey Art Gallery through the Visiting Artists Program established by the O’Donnell Foundation. The Visiting Artists Program ensures that each exhibiting artist is provided a $2,000 stipend, and funds for travel and accommodation. Each artist designs a workshop that students and the public are invited to participate in. Gary Goldberg, Professor of Photography has served as the Gallery Director since 2014 and says he strives to invite artists that will be impactful for the students and the community. During his tenure as director, the gallery has hosted Edgar Heap of Birds, Melanie Yazzie, Victoria Meek, Hasan Elahi, among many other internationally recognized artists. Students and faculty have noted an increased awareness of global and cultural issues, along with a focus on empathic dialog with visiting artists. Previous to Gary Goldberg’s tenure as director of the gallery, Printmaking Professor Catherine Prose served as Gallery Director. During her tenure, she hosted installation artist Gabriel Dawe among others and organized the gallery’s Thirty-Year Retrospective Exhibition in 2008.  With a record of prominent exhibiting artists and the liberal arts mission of the gallery in mind, painter and installation artist Jon Revett was invited to install his show, “Conceptual Crystallization.”

From October 25th to December 13th 2019, Revett’s exhibition was on display in the Juanita Harvey Art Gallery at MSU Texas. This exhibition brought together large-scale acrylic paintings, sculpture, and interactive installation. In this series, the artist builds colorful tessellations based on photographs as his source material to process complex experiences and ideas. Taking inspiration from a wide range of influences that include traditional Islamic art, contemporary figures working in geometric abstraction, and his experiences as the primary caretaker of the late Robert Smithson’s Amarillo Ramp in Amarillo, Texas, the paintings in Conceptual Crystallization could be read as narratives that attempt to grid space, time, and memory through transcendent pattern.

The artist designs soothing contradictions in a number of ways. In Hey Man, Thanks For the Beer (after Doig’s Ski Jacket), Revett creates strict boundaries of color with the patterns he employs, while simultaneously bringing together a seamless gradient of warm and cool colors. The tessellations he designed are hard-edge geometric shapes that have been consumed by larger organic forms. The titles are somewhat mysterious but give enough insight that we begin to imagine the origin of the experiences they reference.

The similarities between recurrent motifs found in traditional Islamic textiles and architecture, and the use of color and pattern to build narrative tessellations in Revett’s paintings, are seen throughout the show. Revett describes his reverence for traditional Islamic art in previous interviews and artist talks. His approach to bringing Islamic tessellations into a contemporary context invites viewers to consider the transcendent ways we are connected through color and pattern. 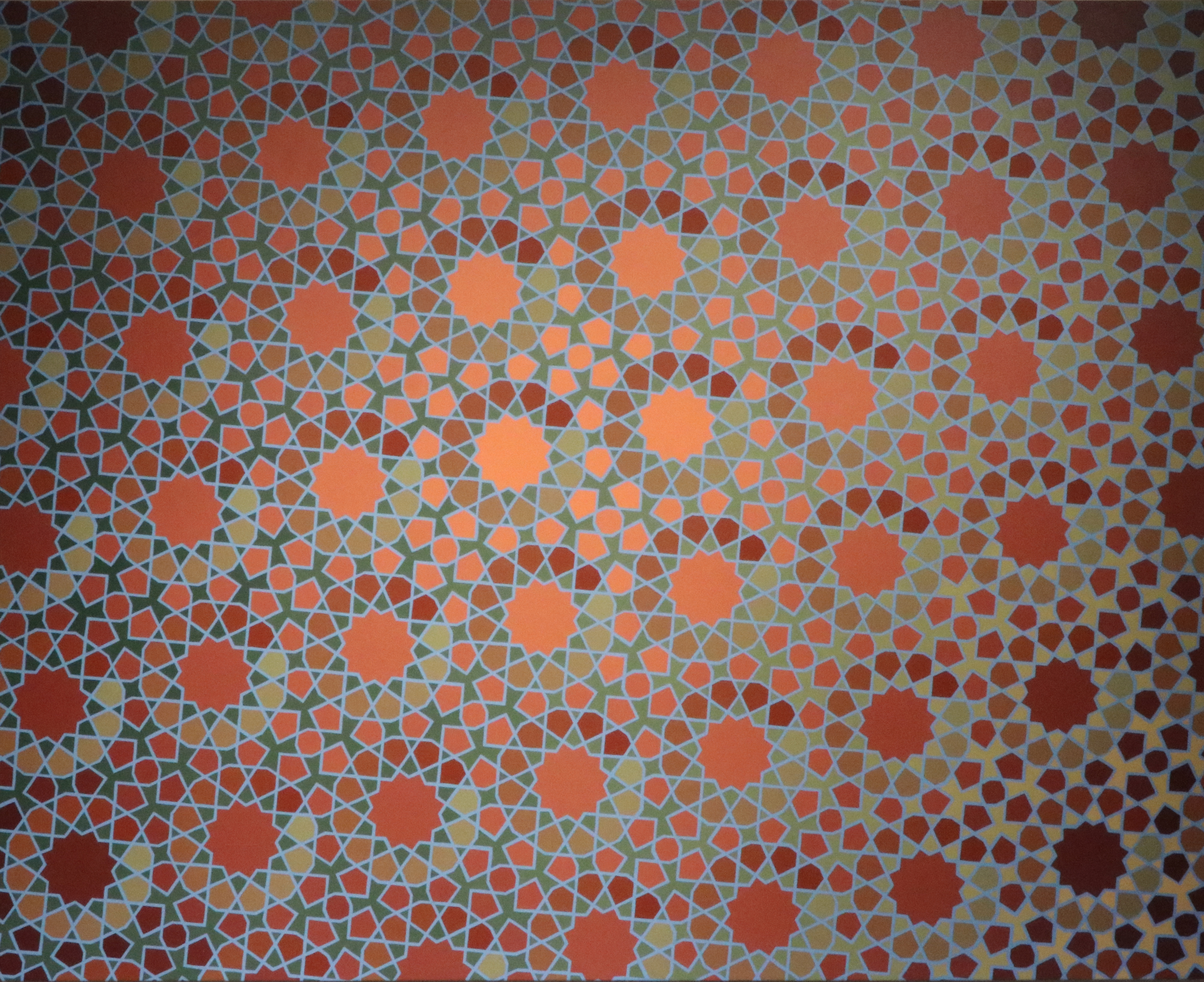 Revett confronts very different color combinations and design problems with each tessellation that he brings to life, but all of the paintings in Conceptual Crystallization share a penetrating attempt at freezing a memory into a powerful grid of color, light, and pattern. Revett’s experience as the long-time caretaker of Robert Smithson’s Amarillo Ramp has undoubtedly influenced his approach to geometric abstraction, not only in the painting with the same title, but in his understanding of the ability and opportunity an artist has to crystalize a time and place, or a landscape in the case of Smithson’s work. As he works to preserve a piece of land with each shift and curve as Smithson intended it to be, he does so movingly for the memories he preserves with his shifts and curves of color and light in Conceptual Crystallization.

While a visiting artist at Midwestern State University, Jon Revett created a tessellation design workshop for painting students at the Juanita & Ralph Harvey School of Visual Arts. Students exhibited their collaborative paintings with Revett in the Pit gallery, a student gallery in the Fain College of Fine Arts.

Jon Revett is a West Texas artist based in Amarillo. He has exhibited both nationally and internationally. His work was included in the 2017 Texas Biennial. To find out more about his work and upcoming exhibitions, visit his website at http://www.jonthelion.com/ or follow his Instagram account at jonthelion13.

Morgan Page is an artist and Assistant Professor of Graphic Design at MSU Texas.