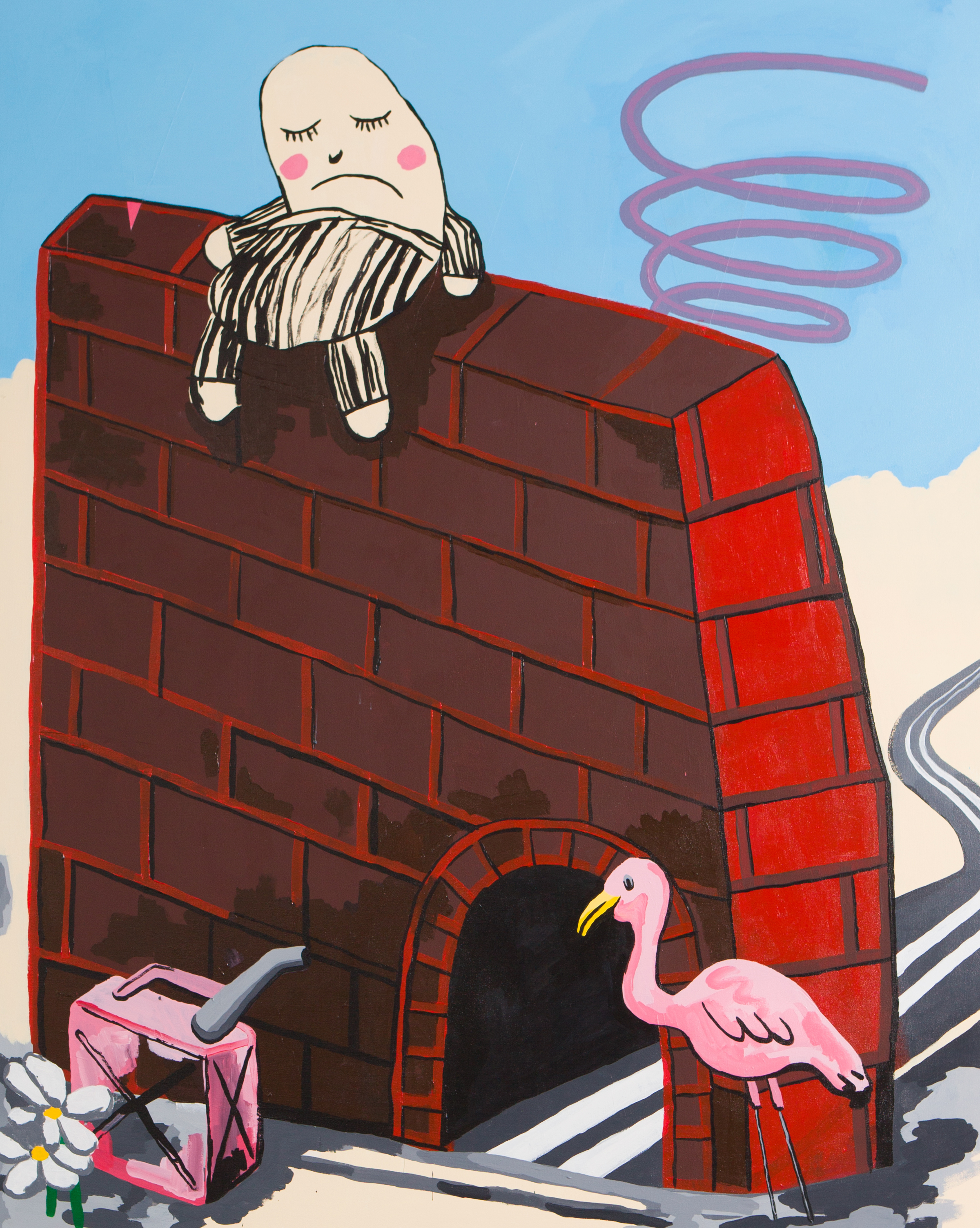 “This is the Humpty Dumpty I know,” Neil Hancock says.

We sit before The Comedown, propped up against a wall in his studio. Hancock interprets his own painting to me subjectively. The work may, he says, deal with the starting point of recovery from addiction; however, he recognizes any political readings of the wall and its wasteland. The ambiguities are the point. Nonetheless, he calls the painting a monument.

Hancock is insistent that Humpty Dumpty remain on the wall, never falling, hitting rock bottom, or progressing. When I learn that his Humpty Dumpty is modeled after a stuffed childhood toy, I interrogate Hancock about childhood memorabilia representing stagnancy and addiction. Hancock dismisses my question—he needed a Humpty Dumpty, and this image was the Humpty Dumpty he knew.

In The Comedown, you know not only the sight of the plastic flamingo, but its rigidity, weight, and texture. You know this because you have held one before. The same is true of the gas can, and Humpty Dumpty. Although Hancock collages images directly from his childhood, he treats them impersonally, like paint, in the creation of a discussion. The objects themselves are commonplace. However, because of the multiplicity of viewers, everyone accesses a different idea of what they know these things are. The gas can, the flamingo, and Humpty Dumpty exist as disputable and shared objects. The painting gathers, through conversation, a communal past and present.

The past activates according to who is remembering, and also, when you ask. All versions are equally valid, between people and throughout time. Revisit a memory a day after it takes place, and one is seeing a different past than they will looking at the same memory a year later. However, both those pasts were equally felt, and, in the mind, equally real. In this way, one lives multiple lifetimes through memory. In the work of five distinct contemporary artists in Athens, Georgia, an amalgamated past is spoken to, and it responds. 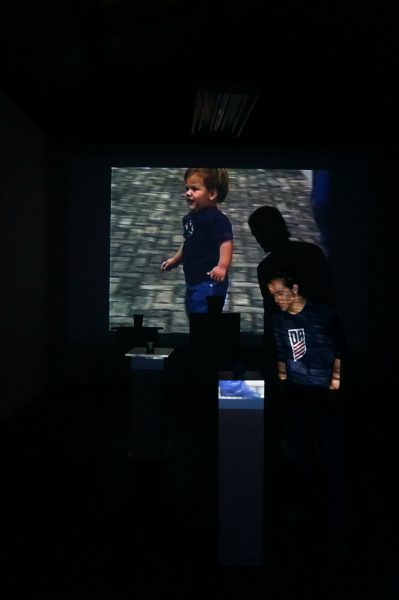 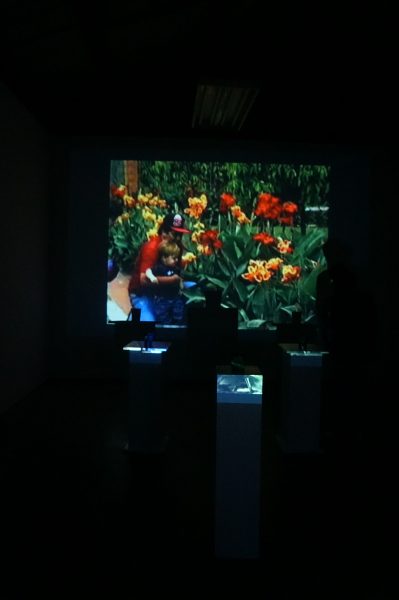 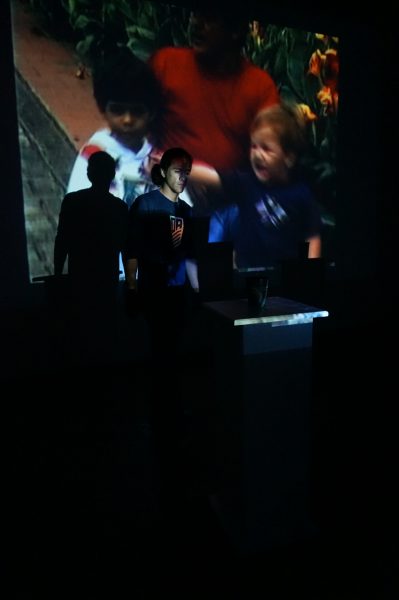 Juan David Espinosa creates a collective experience by putting an inner conversation on display. In The Sensitive Plant, he projects on a wall a video of himself as a toddler. In a public garden in Columbia, he runs towards red and orange flowers, grabbing at their petals and laughing as family members run after him, carry him back, set him down, and let him run away again. A vibrating distortion is laid over the film, and an uneasy noise amplifies and recedes.

In the performance area there are three white pedestals, with three baby Mimosa pudica–sensitive plants. While the video plays, the adult Espinosa paces about the pillars. When his toddler self reaches out to grab flowers, his present self touches a plant. The plant folds inwards, remaining there for thirty seconds or so before opening up again. The present Espinosa concentrates visibly, never acknowledging or making eye contact with his audience. While his toddler-self laughs, he murmurs to himself, too softly to be heard. At the video’s end, as a male relative picks up the toddler one last time, Espinosa says, barely audible, “I hate how much I miss you.”

Later, discussing the piece, Espinosa talks about his childhood in Columbia. He remembers dragging his hands through large swathes of sensitive plants, and watching the subsequent wave of recoiling stems. The Sensitive Plant presents the idea of Home as solid reality, evidenced by the home video and the plants’ response to touch. Yet all these also operate like relics or artifacts, not only cataloguing the existence of Home, but the uncertainty that Home still exists, or can exist again in the way that these elements do. Espinosa, as he paces between present and memory, shows his conversation with the past and what became of it. 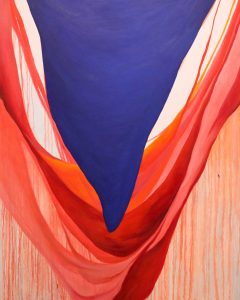 Alden Dicamillo, a painter and interdisciplinary academician, takes an active stance against the traditional past, as they use art to reclaim the history of their womxn ancestors. Assigned female at birth, they consider themselves part of a line of womxn whose lives are shaped by warped translations of the New Testament and male leaders of the Christian church. Oversexualization of physical forms, and the brutal dictation of lives that sprang from it, produced a gendered cultural role that Dicamillo inherited. Contemplating both the role’s brutality and resilience, they create artwork that queers their childhood and their family history through genderless, bodiless paintings, as well as altars of personalized gods and spirits. They leave no foothold for binary terms and linearity, revealing only the instinctual and unknown.

When Dicamillo’s grandmother died, her life was treated with forms of documentation and memory that became a form of violence against her. To Break Cedar is Dicamillo’s response and grieving process. The piece monumentalizes Dicamillo’s grandmother’s death, and queers her history by separating her memory from her sex and sexuality. Jewel tones of scarlet, pink, amber leap from the surface to sear the gaze. In scale, the piece dwarfs its viewers, and the massive blue hesitates in a moment of suspended gravity. Despite undulating space and billowing gradations, the soul depicted remains sharp, and dangerous–a set of kitchen knives left unattended on the table even though children are nearby.

“When Jacob wrestled with god, he built an altar made of stone and anointed it,” Dicamillo writes. “She and other forces wrestle in me, and that’s god, and I had to construct a monument. It’s anointed in rage and gentleness.” In the monument to their grandmother’s soul, they radicalize their family history. 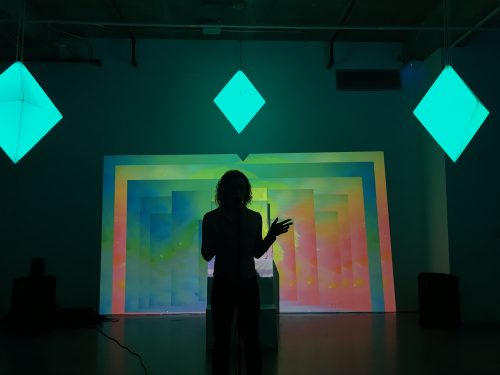 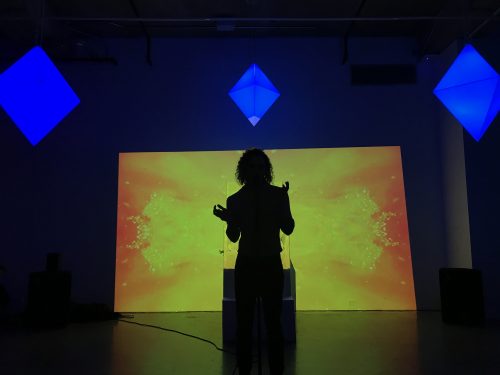 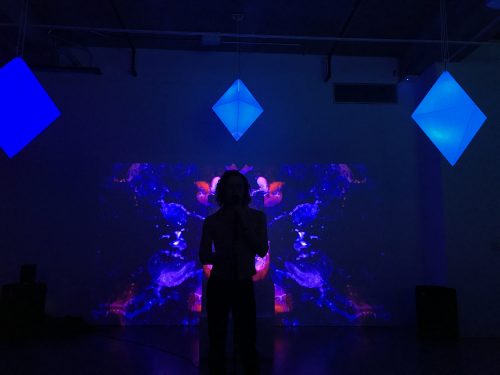 The disparity between his childhood self and the self that was able to act in the world is something he revisits and explores in his art. In his performance piece Hierophant, Craig stands in front of a wall, upon which is projected ever-shifting geometric patterns of vivid color. Behind him there is a high throne. Hanging from the ceiling there are three illuminated, color-shifting prisms. Craig sings solemn self-composed ballads addressing, for the audience, unknown people and forces. At the end, he climbs upon the throne. He places a replica of a papal crown on his head, takes up a cross, and lifts his hand in the benediction: two fingers up towards heaven, two fingers down towards the earth.

His pose mirrors the Hierophant, Craig’s birthday Tarot visualizing the bridge between heaven and earth. However, the Hierophant’s visage is solid—his robe, architectural surroundings, and kneeling attendants make him a pillar. Meanwhile, Craig’s clothes expose his form. He is seated on a throne of translucent cloth over skeletal wooden beams. His headdress and ornaments are bone white, and donned before the audience. His prisms echo the compositional pyramids in use throughout art history, but the prisms also shift colors and float disconnected from one another and from the ground. Seated in front of a flux of form and light, clothed in symbols both transient and permanent, Craig’s bridge between heaven and earth seems as fluid as rainwater.

Lambda Celsius (aka AC Carter) also appropriates symbols to respond to external forces. Using music, fashion design, personas, and faux-lectures, they address the biases that have formed the way that we create and talk about history, culture, and art. They act in the guises of Ana Echo, Vixine Martine and DJ .58. Heftily referencing, yet distorting, the pop culture of the past few decades, Lambda Celsius crafts an alternative present.

In the “Beauty of Indifference” music video and drag performance, Lambda Celsius has a gender-bent doppelganger, embodied by Caleb Craig. The pair move separately through populated and empty versions of the same bar, Lambda Celsius surrounded by an audience and its energy, the doppelganger focuses solely on the camera as they stretch, gaze, and sing. Both figures are meant to embody the same person, and yet, they are in distinct realities, interweaving with one another. Their origins remain enigmatic, as is the case with most of Lambda Celsius’s panoply. Working their way through personas and parallel beings, Lambda Celsius taps the hypermodern experience. Heightened opportunity accompanies heightened influence and less infrastructure for the future; this uncertainty means that individuals live multiple lives through the perception of potential realities as realized ones. The individual shifts between what they are certain will happen, and so flicker from life to life from moment to moment.

Hancock, Espinosa, Dicamillo, Craig, and Lambda Celsius, in their practices, represent the ways in which artists reposition themselves not as subject of unchangeable events, but as omnipotent editors of their inner beings and experiences. Through art, performance, and inner alchemy, the relationship between the present and the past is allowed space to exist as more dialogue than loop, religion and self-identity formed by the calls and responses. In this way, artists create and live multiple pasts through the revisiting of memory, living sideways as well as forwards.