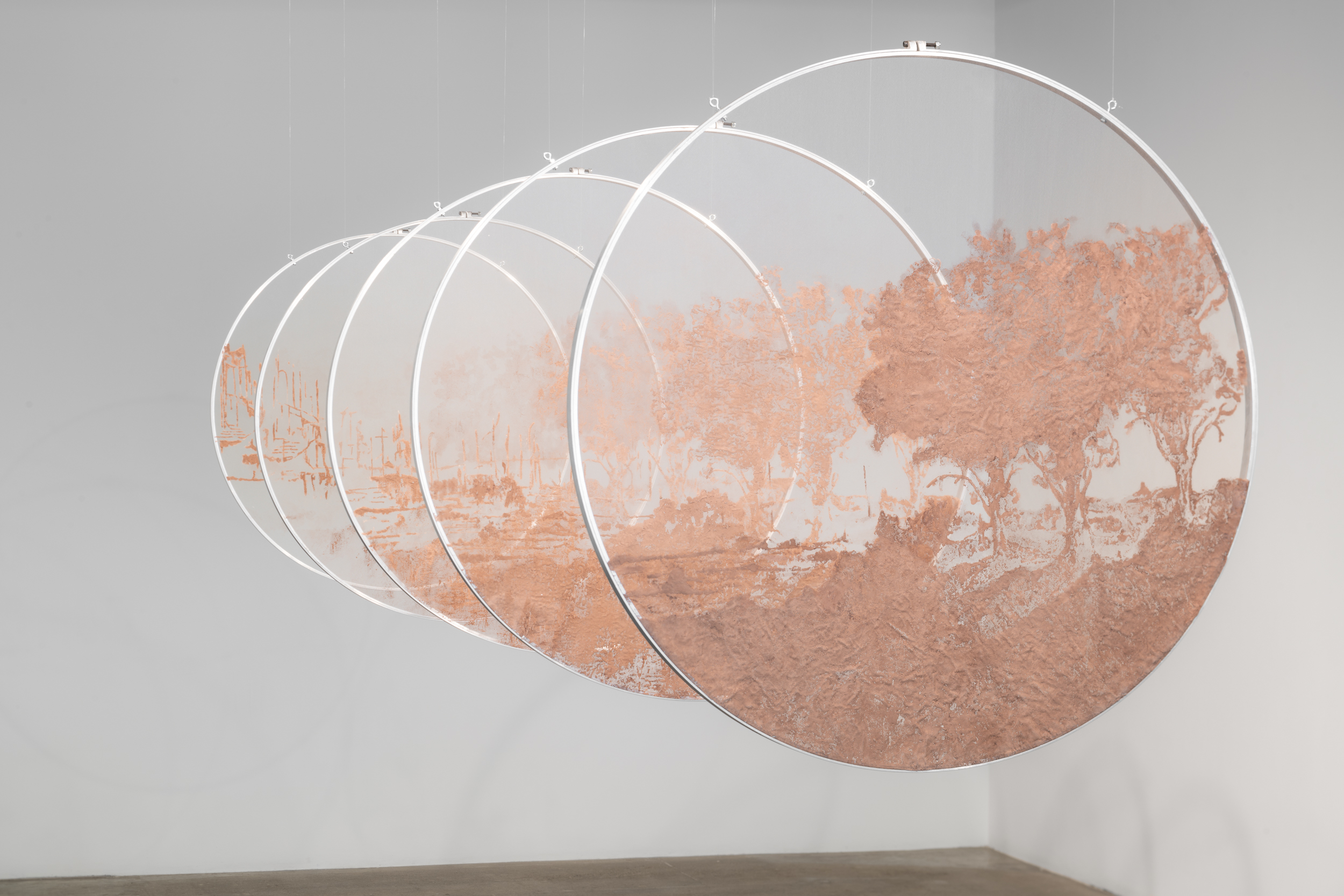 Kate Roberts is a Memphis-based artist who uses porcelain and other materials traditionally associated with craft to create haunting works of art ranging from prints to installations. Her work draws from architecture and relationships to build landscapes of decay and romance. Roberts is a professor at the University of Memphis where she is ever aware of the relationship of art and craft in ceramics and how to best teach both to her students. I caught up with her in her studio as she prepared for the National Council on Education for the Ceramic Arts.

RB: What was it about ceramics that first captured your imagination?

KM: Well, first of all it’s just dirt. It reminds me so much of when I was kid and I would play mud pies in the backyard. It’s this material I could manipulate with my hands, which was really intriguing to me. I’ve always done some type of art, but ceramics was definitely this thing that arrested my attention. I like the fact that I’ve never gotten bored with it. There’s always something new– a new way to work with it or a new state that I haven’t worked with yet.

You’re working in sculpture and installation as well as in two dimensions within ceramics. How do you define the relationship between art and craft within your practice? What has that journey been like, would be another way to think about it.

I feel like the two of them walk the line beside each other for me. There’s always been this kind of blending too. Sometimes they can be separate but sometimes they come together, (art and craft), but I probably started the most in craft. For me craft is about understanding a material, so exploring all the avenues a material can take you in. I’ve never looked at ceramics as something that absolutely had to be functional, a word we often associate with craft, because I’ve come to it from a sculptural place. Even in middle or high school I was never encouraged to make it functional. I think that’s because I had teachers who were not functional ceramic artists. I’ve always looked at it more as thinking about a material that can be manipulated. 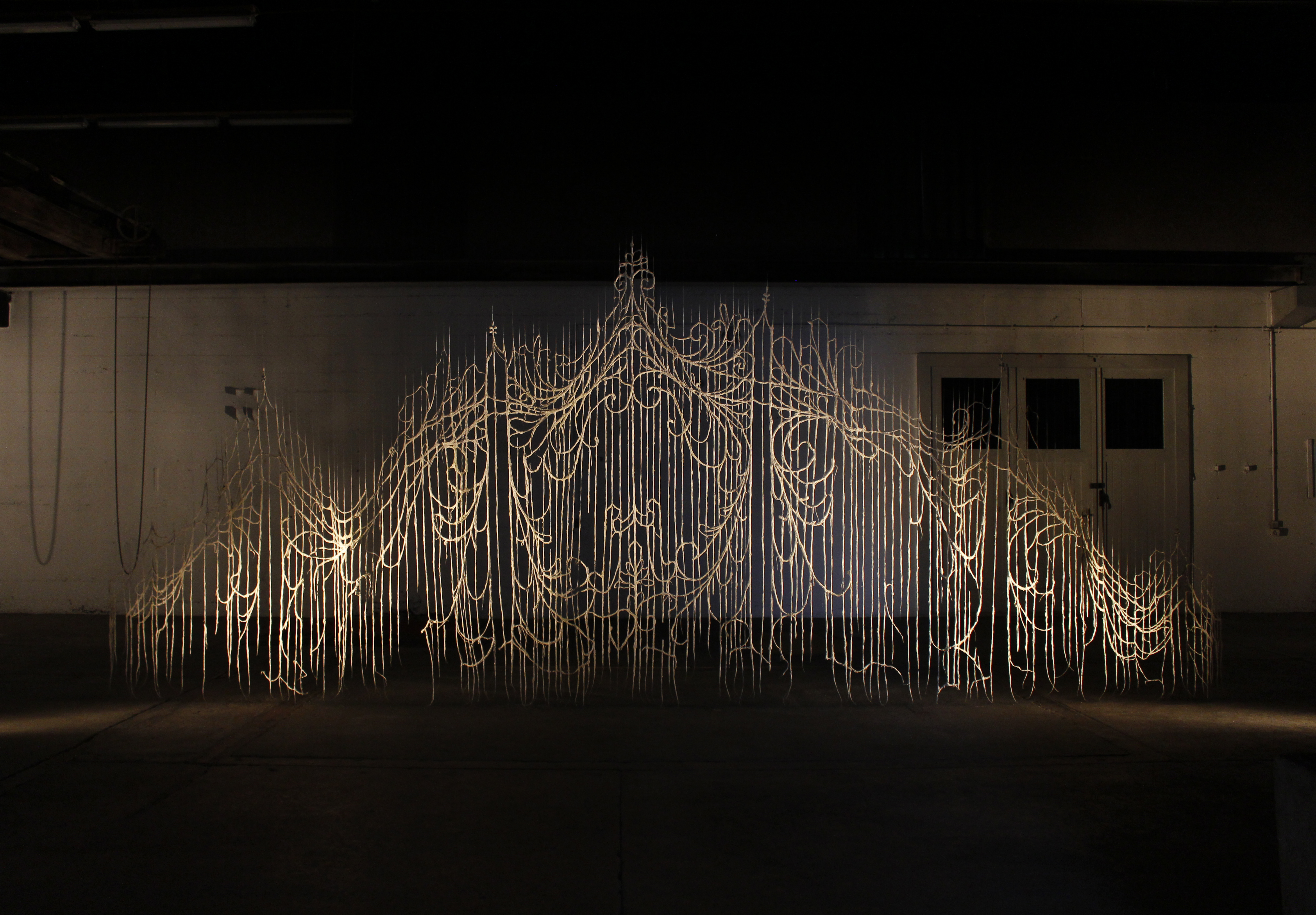 Was there a moment either in your artwork or education or other situation where the sometimes-fraught relationship between art and craft impacted you or became an issue?

It’s a conversation I’ve been having a lot more lately especially working with ceramics in an unfired way as I am at the moment. I think about the ceramic artists I’ve seen bridge that gap between art and craft, Arlene Schecet or Kathy Butterly. Those artists have always positioned themselves in the art world. They’ve always said, “I am an artist working in ceramics” and they have never positioned themselves as a “ceramic artist”. I think it’s about the vocabulary you use that directs you into where you may fall. One of the challenging things is breaking out and showing in galleries that are not as centered around ceramics – how do you inject yourself into that world without being associated with a material or how do you think that material (clay) can expand past the associations it’s had for a very long time.

When I was in undergrad, the school I went to was very anti-craft. Occasionally a student would ask about kilns and the school always answered in a very old-guard way that they were an Art school and they would never teach ceramics.

Right, and that’s kind of that thing in many schools… right now in art today there’s a huge embracing of craft. For instance, at the Kohler Art Center in Sheboygan, Wisconsin, they just had an exhibition on Lenore Tawney. a fiber artist whose art influenced the likes of Agnes Martin. So, it’s an interesting thing – without some craftspeople there might not be some of these huge hitters in the art world. Craft is also associated with pushing an initiative for diversity within the art world. A lot of times where you find craft coming in is through forms like weaving or pottery and there are artists using these “trades” to talk about their culture. I think you need craft in order to have art, too. 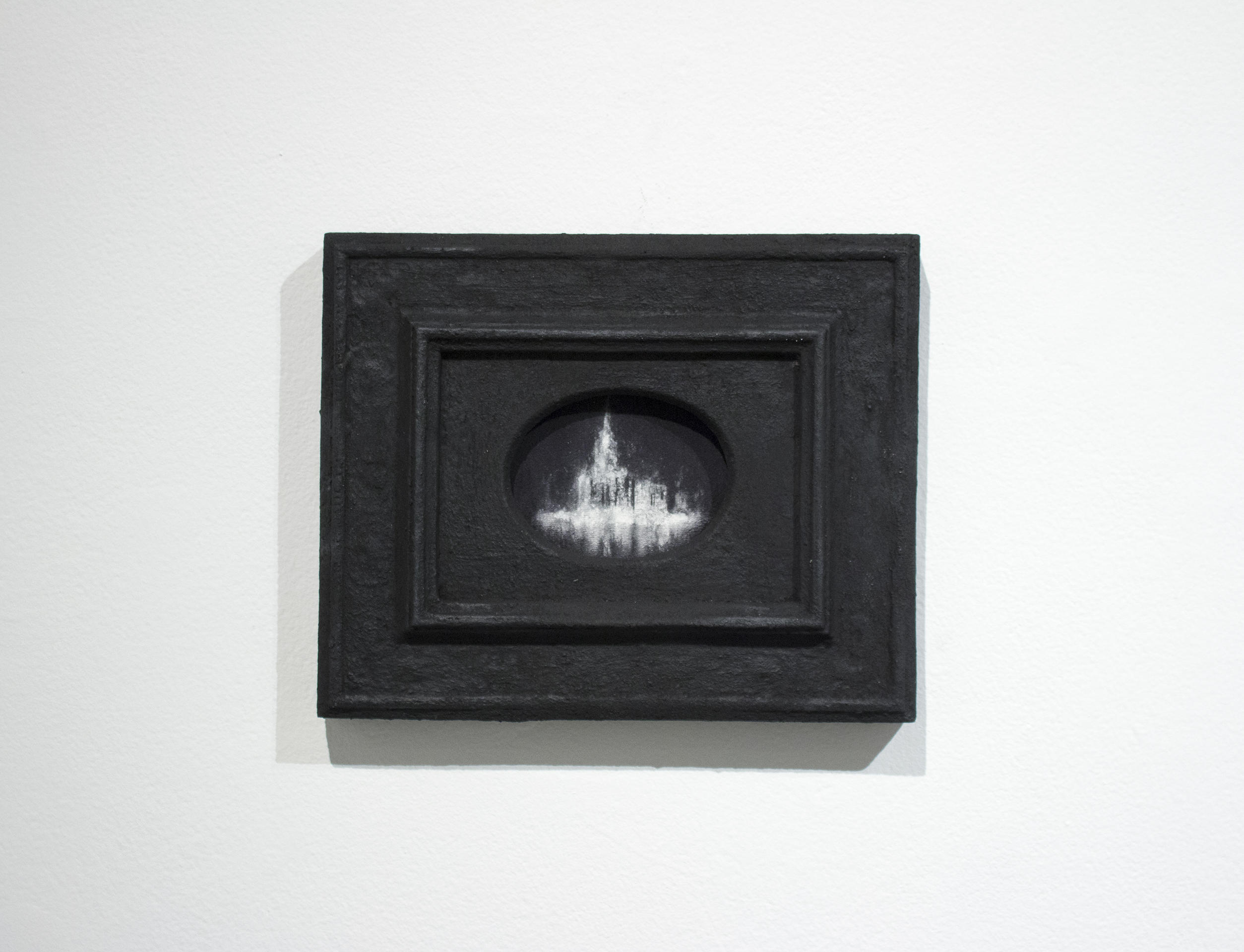 I think it’s interesting that you bring up Lenore Tawney and weaving because I see that in some of your installation work.

Textiles have always been connected to my work. I don’t necessarily connect to ceramic history. I really draw from other sources or other uses of materials and then apply it to ceramics in a similar way. Like here I’m using tulle as a mesh to sieve clay and mixing fiber and clay as a weaving structure.

As educators we have more power than we might necessarily want in influencing the opinions of students around the relationship of art and craft. How do you navigate those traditions for your students and what do you hope they take away from your philosophy?

I went to an arts high school and that’s where I took a lot of ceramic classes. My teacher there was primarily a sculptor – we never touched the wheel; that just wasn’t her thing. So, when I went to Alfred for undergrad and then grad school, which historically is a school of craft and gradually became an art school, I had professors who had been very engrained in craft. I was lucky to have professors and grad students around me who were engaged and looking to push what the medium could do. I was always asked to challenge what I was looking at and making.

When I started teaching, I knew I didn’t want to create a bunch of “mini-me’s” where the student work looks very similar to the professor’s, and because I want to learn new things from working in tandem. I will say that it doesn’t always go over so well. Some students come to ceramics with one thing they want to learn like the wheel. So, I have to be multiple people at one time. I have to be this person who understands the traditions of craft and students who are interested in that, but I also like to teach classes that introduce students to new contemporary techniques and to mix weird materials into clay and then fire it and see what happens. I enjoy that weird experimentation I ask them to do because it directly affects the way they see the medium and also my process and work. 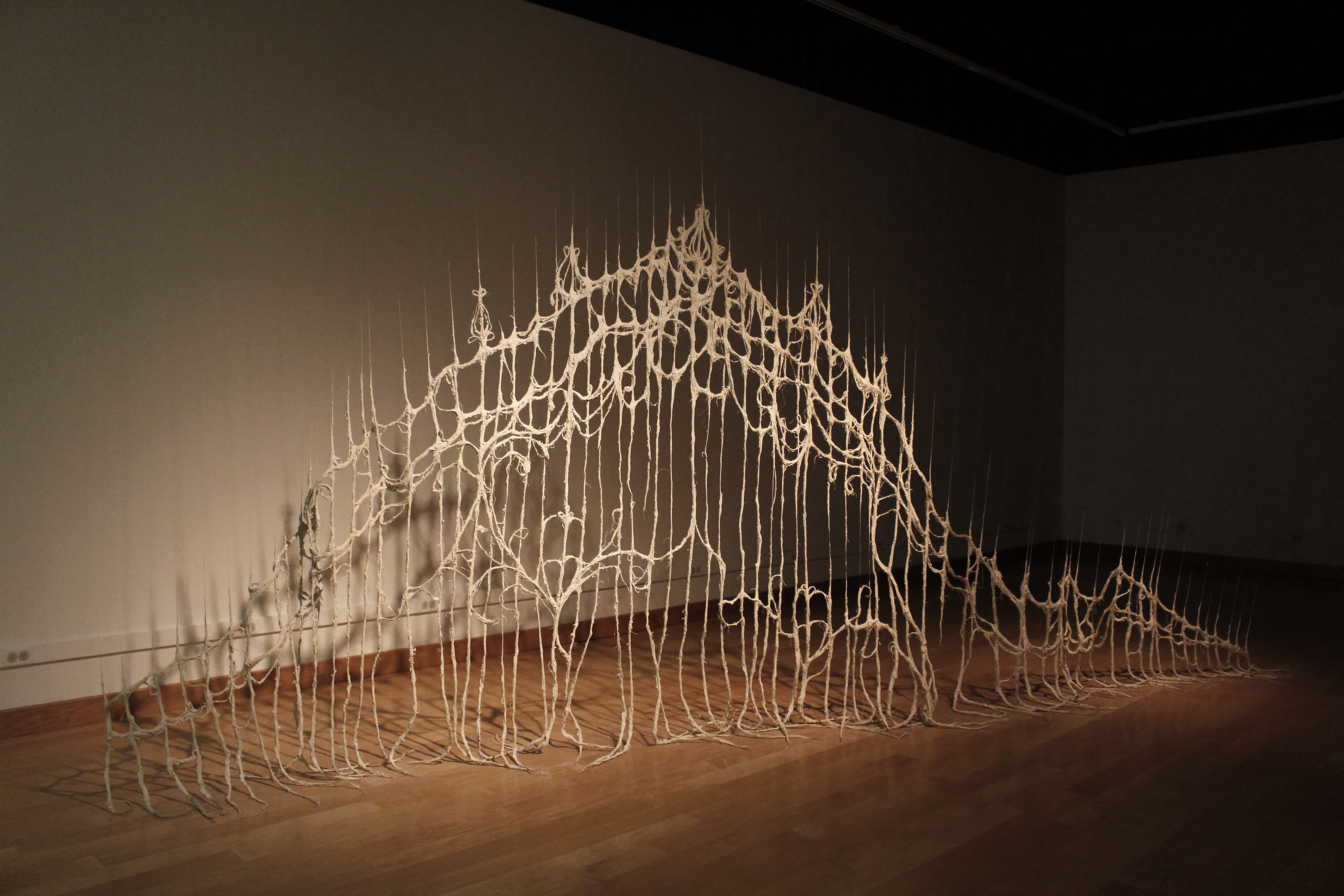 Getting into your artwork again, your work often relates to romanticism, decay and architecture. What role has material played in your work? Does material drive the concept or vice versa?

I’m somebody who was probably born in the right time period but wishes they were born at a different time, although I probably wouldn’t have had the exact same opportunities I have now. I’ve been influenced by the Victorian era and our associations of that time with life and death, these two different states that clash and blend with each other. That comes up in my work- the one compared to the other. What drives that is an exploration of materials and the opportunity to play. I take play very seriously. For instance, these dust paintings that are happening now… I was curious about the imprints left in dust when you move something, clay as a dust state and dust hanging in space. That led to this mesh and the mesh became a sieve trapping clay.  When the mesh is layered, it becomes this atmosphere. Romanticism is definitely there. Romanticism came out of a direct relationship to industrialization that was happening and there was a need for nature to reemerge. And that’s what’s happening again now within our current environment, and it directly links back to romanticism.

As an artist who appears to move fluidly between the world of craft and art, are there challenges you face that other art professionals might be surprised by?

There was a moment 5 or 6 years ago when everyone wanted 3D printing and ceramics to join forces, and there was a real anxiety of using that technology in your process. But what I noticed was that, in direct relation to that, there were artists that started to make work that showed their hand. They wanted you to see their touch. They were in direct opposition and were saying “this is why I like this material the way it is” and “I want you to see it for what it is”. So, I have seen that come back, and I’ve also seen ceramics becoming more accepted in the art world because many artists who use this material do not want to directly silo themselves in one medium. I’ve seen a lot more artists coming to clay because of the approachability. Craft is approachable and, therefore, the future of craft will continue to directly influence art in more and more ways.

Raina Belleau is an artist, educator and writer in Memphis, TN.