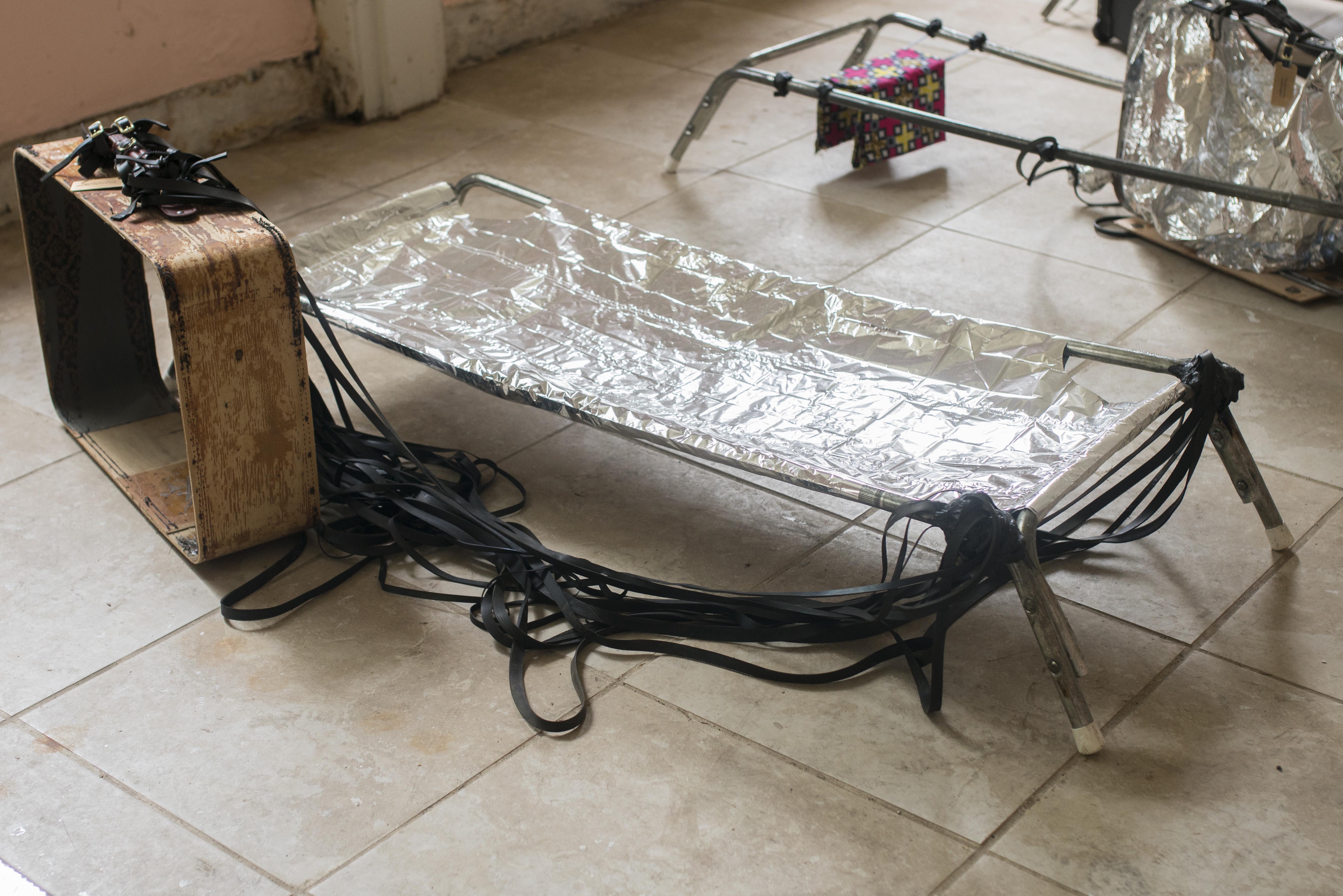 Massa Lemu’s The sea hums bearing strange gifts (May 10–24, 2018, Oakwood Arts, Richmond, Va.) brings objects, moving image and language together in a complex meditation on the emotional and psychological experience of displacement. Video footage and materials from Lemu’s native Malawi are carefully blended into the site and history of Oakwood Arts to powerful effect, providing a moment of communion in which two distinct localities—a disused church and community center in a historic Richmond neighborhood, and a fishing community on the edge of Lake Malawi—are brought into momentary equivalence within a larger narrative of societal transformation and economic development.

In the exhibition’s main space—a disheveled, former daycare with faded, pink walls—we encounter a series of objects and interventions. A modified cot, its fabric hammock replaced with a sheet of emergency mylar, is tethered by strips of black rubber thong to the skeleton of a suitcase, a plastic and metal armature with the fabric covering stripped away. Where these rubber sinews meet the cot’s frame they are lashed into a tough, tar-coated knot. The cot frame, a holdover from Oakwood Arts past, is worn, hinting at years of transience and heavy use in the service of naps and “quiet time.” Approximately eighteen similar cot-and-suitcase units are present in the space, exhibiting variations on this theme—mylar cot, rubber straps, denuded luggage—adorned in each case with clusters of luggage tags, tied on in bunches around the suitcase handles, and accompanied by carefully folded swaths of brightly patterned Chitenje cloth, a printed, cotton fabric typical of Malawi and other Central African nations. The luggage tags are engraved with a repeating assortment of cryptic phrases that read like isolated lines of poetry: “[travel] to see dogs with belly buttons,” “the sea hums bearing strange gifts,” among others.

Throughout the space are also dispersed several small, wooden children’s chairs which, like the cots, show the wear from years of use–but that have been recently varnished and, upon closer inspection, reveal greasy surfaces. Two worn-out chalkboards contain writing: one-liner jokes about itinerant and vagrant fathers. And, at the back of the room, a small alcove creates a viewing closet for a video monitor embedded crudely in a simple frame wall. The video moves through a series of short scenes. There is no concrete narrative connecting them, but all take place in or on the shallows and shores of Lake Malawi. And there is a suggestive continuity of themes: water, masks and masquerade, fishing canoes, and symbolic actions charged with something like ritual significance. One particularly haunting scene involves a group of young men playing in the lake while wearing gas masks.

There is a site-specificity to Lemu’s project that goes beyond practical or logistical measures of that term. Developed, executed and installed over a period of 6 months—time Lemu spent as the inaugural artist in residence at Oakwood Arts—most of these works will easily be packed up and relocated at the conclusion of the show. (They are, in point of fact, built from the rudimentary equipment of relocation—suitcases, cots, etc.) And when shown again they will present, at least ostensibly, as complete or whole.

The work is encountered at Oakwood Arts, but when considering its provenience there is a powerful feeling and narrative of emotional interdependence between the objects and their original site. And a concern arises, not about whether they can survive, but about what kind of survival and existence these works can maintain once divorced from this place—their psychic source—at the exhibition’s inevitable conclusion. Just as this swell of empathy begins to rise, however, Lemu quickly provides an emotional counterpunch, in the form of one of the chalkboard jokes: “Dad was a drifter…” it reads, “but that’s neither here nor there.” In other words, he seems to suggest, under conditions where trauma of separation is an inevitability, you may want to conserve your emotional energy.

This pull then push of contrasting gestures—the evocation of intimate and sincere sentimentality followed immediately by thick-skinned humor—is perfectly calculated by Lemu as a way of plugging the audience into the psychological experience of diaspora and displacement which, in Lemu’s calculus, seems equally (and inseparably) footed in both vulnerability and resilience; loss and hope; tragedy and invention.

In a second space, Lemu presents a larger, projected video. To reach this space you must go down a strange hall, climb a few steps, and cross a dirty patch of abandoned yard to enter an equally abandoned sanctuary: a small room affixed to the former chapel with a single musty pew where the ceiling is quite literally falling in. Within this setting, which Lemu cites as a nod to the often-improvised cinemas of his native Malawi, a short, single channel video is shown in a loop. In it a man, bare from the waist up and wearing a traditional Malawi carnival mask, sits in a beached canoe with Lake Malawi in the background, rowing at the sand in a gesture of playful absurdity. The mask, a popular character in Chewa masquerade known simply as “Simon”, invokes a red-cheeked European, flushed but smiling in the heat, and bobbing up and down with each stroke of the oar. The canoe he rides in is battered and patched, an embodiment of the material and labor conditions of a people, as Lemu describes it, “operating at the edge of the global economy.” Boldly painted on its side is the phrase “APA PANA KUL” – there is food (nourishment) here. Despite the cheerful and energetic presentation, the overtones are fairly obvious, and fairly ominous. Even more so when considered within the context of the current push by international firms to conduct oil speculation within the lake itself, putting the lake, and the peoples, economies and ecosystems that have depended on it for millennia, at risk. 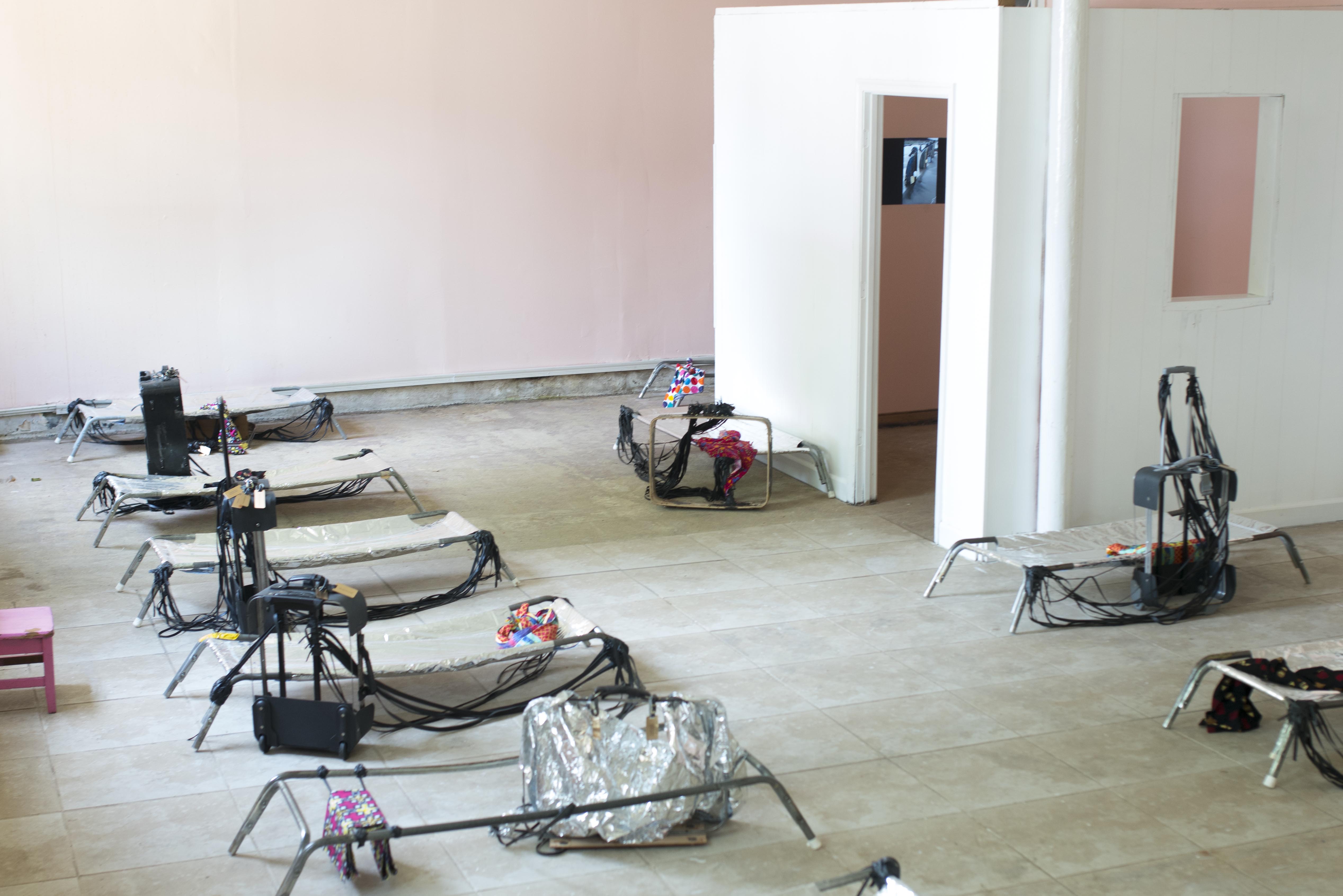 In all these gestures Lemu points us to a cultural and ecological location that is, to invoke Giorgio Agamben’s use of the term, truly contemporary: “a ‘too soon’ that is also a ‘too late,’” “an ‘already’ that is also a ‘not yet.’”; an economic and political position that, even while it constitutes a home, also constitutes a kind of diaspora.

As a former day care center attached to a former neighborhood church, Oakwood Arts provides the ideal, sympathetic setting for the content of Lemu’s project. Focused around the specific socio-politics, material symbolism, and featuring the peoples and places of Malawi, it’s an unfortunate fact that Lemu’s subjects might register simply as ‘other’ for American audiences, especially white audiences. But the equally specific history of the Oakwood Arts site offers these audiences a familiar and local parallel to the narrative themes we see played out in Lemu’s project, and an emotional bridge through which the urgency and complexity of those otherwise alien circumstances can be accessed. A daycare center offers an operational corollary to a refugee camp (temporary shelters for vulnerable populations). A closed, neighborhood church becomes a type for the precarity of the spiritual and cultural foundations of a community, and the potential breakup of the community itself (“the sea eats the land at home,” as reads another of the luggage tags).

The works are frank and direct in their acknowledgement of these challenges. Yet, within Lemu’s project, there is always some space left from which, and within which, the vulnerable can assert their agency. At no point is their dislocation complete. Drawing upon the endowment of their heritage, Lemu’s implied protagonists conduct gestures of reclamation and empowerment, asserting their belief in a more coherent and stable future. The quiet resolve of the neatly folded Chitenje cloth speaks to pride of origin and strength of culture, even in the midst of difficulty and uncertainty. Rubber thong straps, the “duct tape of Malawi”, are a literal and figurative binding tie, performing the elasticity of a society in flux, yet still holding firmly to its past and its future. Language, which plays such an important role in the exhibition, is presented as something active and instrumental. Beyond simply describing what is actual, it becomes a powerful tool for shaping, organizing, and enacting a new world (And even for providing humor, when needed!). Themes of invention and ritual speak to the ingenuity and spiritual durability of a people caught up in what Lemu, citing Walter Benjamin, describes affectingly as “this storm…we call progress.”

Chase Westfall is an artist, curator, and educator based in Richmond, VA. Formerly Director of Gallery Protocol, Gainesville, FL, he now serves as Curator of Student Exhibitions and Programs at Virginia Commonwealth University School of the Arts.