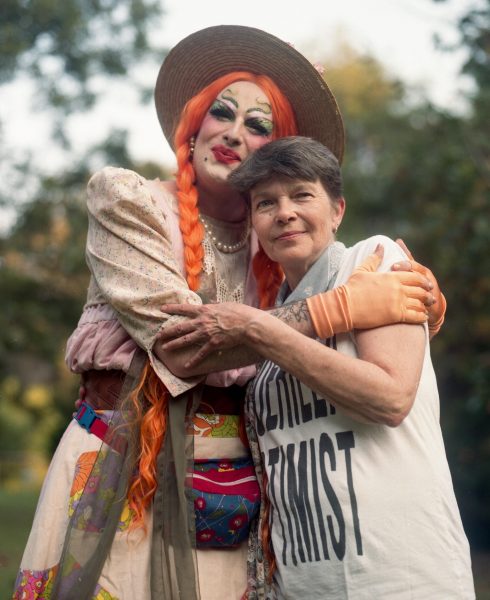 Portrait of Jean and Mothie, 2019. Photo courtesy of Marcus Menefee.

The following conversation between artists Jean Holmgren and Moth Moth Moth uncured over the course of a week via email.

It’s hard to know where to start our dialogue. The world has been so wild and unstable. Good news is we don’t have to talk about the whole world. So, let’s start where we

My name is J.T., but most people know me by my moniker as Moth Moth Moth, which began onstage in 2016 and grew to encompass all of my artistic endeavors. I grew up in Pickwick Dam, Tennessee. I paint, draw, dance, write, teach, and do as much activism work asmy body will allow. By day I teach little ones to create, and by night I twirl in skirts and rainbow wigs hoping to teach others to be lighter. I have epilepsy, four cats, one handsome future husband, and a tiny pink house. 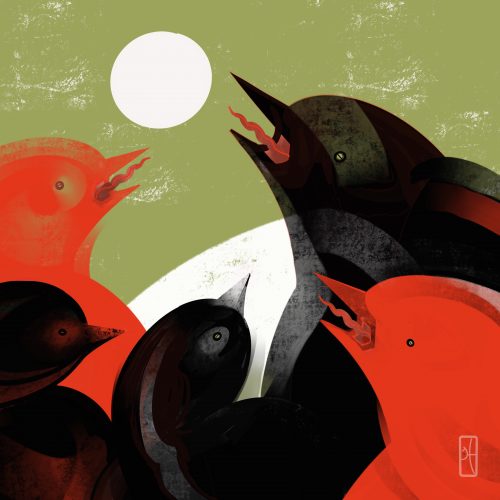 I’m Jean. I’m a sixty something artist/illustrator and wanna-be writer with the soul of a ten-year-old boy. I live in Byhalia, Mississippi, on 13 acres of mostly woods. I am close enough to Memphis to enjoy the community and far enough away to indulge in making art in solitude. I have made my living as an illustrator, designer, maker of objects and just as of late as an Assistant Professor at Memphis College of Art before being released back into the community as it closes its doors. I have three cats and four dogs and a loving wife to keep me company.

And I have a broken heart.

I have known and admired J.T., tangentially, for several years as we have been in close orbit, through Memphis College of Art, his work and our connection to the community. Art makes us all family.

So, here is my unprompted first response…because we are both dealing with pretty recent health issues.

There is something universal about the loss of autonomy. In the art world, there is much talk about ‘voice’ as it pertains to the stylistic choices of our expressions. It is the fingerprint of our work as it relates to its consumers. What may not be addressed as often is the artist’s physical state and how it affects a body of work.

How does catastrophe change the work?

Specifically, when I am asked to describe myself, I almost have to include that I have a broken heart. My heart failed unexpectedly two years ago, and I had open heart surgery. When the body machine fails, it is a betrayal. The fear that accompanies the loss of the one thing that really defines us as “artist” is chilling and life altering. How does living with that fear or damage change the work? 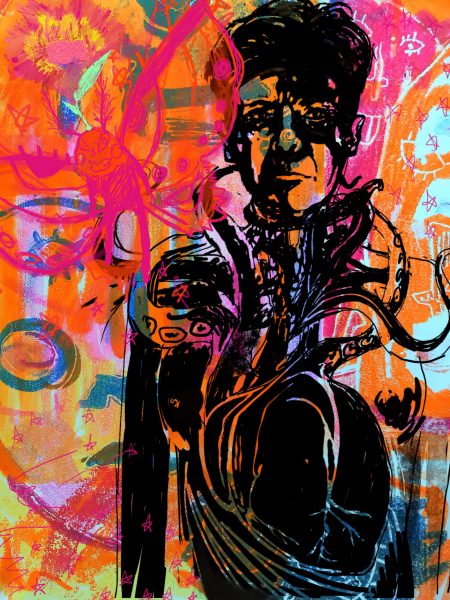 Virginia Woolfe implored that people should talk about their illnesses lest we silence one of the biggest influences on human culture and our own limitations.

On July 4th of 2018 I had a grand mal seizure. Since then I have been diagnosed with epilepsy, and I’ve made do with it. Currently I am stable, working, and feeling cautiously optimistic.

To speak of a betrayal is accurate language. I was safe in my body. I was safe in my mind. And then I wasn’t anymore. That big seizure signified the burning off of many things, some good and some bad. When describing this time in my life there is a tendency I have to use fire and burning houses as metaphors. Before, my mind was a really big house where I kept a lot of baggage locked up in rooms with no keys, and after it was like I stood in an open field.

I was at home with my boyfriend when it happened. In the hallway between the bedroom and the art studio. It was as though the lights in my mind turned out. I woke up to a mental napalm in Jackson’s arms. I’ve never had so much pain nor cried so hard in my life. Parts of my mind were gone, burned up in neural fire.

Friendships ended. Contracts ended. I stopped drawing pictures of blue skies and instead began to scrawl poems with little flames surrounding them. I spent a long time away from work, face down in the bed. Words like writer, artist, performer, and teacher felt as though they may no longer have applied to me.

Still, those little poems grew into stories. The little flames grew into paintings. The songs I listened to while I cried in bed became the soundtrack to so many performances.

And now I’m trying to figure out where my limits are again. Stepping back into a world that kept moving even when I was at a complete standstill. Out of the cocoon again, so to speak.

I may be the scarecrow to your tinman. So, tell me, where did the creative spirit go in the aftermath and recovery?

“…Scarecrow to your tinman” will probably be the most definitive sentence in this entire Conversation, and it connects us beautifully on so many levels.

Easter morning 2017, I could no longer ignore the fact that I just could not breathe. I had spent the sleepless night before thinking that if I could just get in the right position I would be able to get some air.

I was not in pain. I was in panic.

I did not have a heart attack. My heart failed and had apparently been failing for some time. After a year and a doctor change, as heads were scratched and my energy dwindled, I was eventually diagnosed with idiopathic cardiomyopathy. They cracked open my chest and replaced my mitral valve.

That year of being told everything from “you may not get any better” to “has anyone talked to you about a new heart?” is almost indescribable.

Would I still always be able to move a pencil…if I couldn’t eventually move myself? So, I wrote. I swore at the universe and I drew what I imagined that nasty valve and it’s sisters must look like. I drew the sneaky nameless bacteria with an agenda that could have attacked my heart. And I worried…with all the visual imagination that lives in me…that I would become THAT person, who has no autonomy, no voice and no expression.

The surgery corrected most of the problem and the writing and drawing exorcised most of the demons. I am vertical and still manageably damaged but working. The process of stringing all those words and images into a cathartic personal narrative did as much to save my life as the surgery.

I would add to your Virginia Woolfe sentiment my own bastardization of Shakespeare’s Falstaff, ‘Distraction’ is the better part of valor, because avoidance of the thought of battle allows you to survive it in bite-sized pieces. 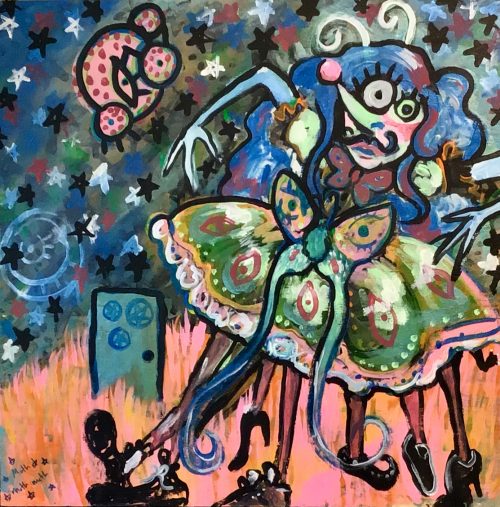 I found a new normal when I accepted that things were going to be different from now. That transformed me and then transformed the work. For a while it was just me and that frenzy of free-verse poetry. Very few drawings. No performing. In many ways the whole ordeal reset me. I had to decide on what things I couldn’t live without. Previously held positions on who I was and wanted to be had shifted. The art reflected that.

A good friend of mine, when looking at my work since my recovery said, “…it’s more

muscular”. It took me a minute to unwind that metaphor but catastrophe and recovery

has made my work bolder, more focused and less concerned with little things. It’s all big

Moth Moth Moth is a drag/visual artist and museum educator living in Memphis, TN. Jean Holmgren is an Illustrator who lived in Byhalia, MS and taught at The Memphis College of Art.