Interview and photos by Marlos E’van.

In April 2022, I went over 2 Cybelle Elena’s design/fashion studio 2 engage in a conversation about her new collection, Party Aminals. It was there that Cybelle shared stories of her upbringing, inspirations, & future plans that involve community, theater, & having the autonomy to create whatever you want. I had a great time during this studio visit, & even got 2 watch some of her models prepare for the launch of the collection which took place at the American Legion in East Nashville! Wow!

Marlos: Hey Cybelle. Thanks for having me over at your design studio. Care to tell us what your new fashion collection is about?

Cybelle: So basically, I’m really into conceptual stuff. Im not really tryna make some cute outfits (both laugh). I like to create the whole world behind it. The world in which this new collection exists is called Tiger Beach; specifically on the North Shore of Tiger Beach.

Cybelle: There’s a bunch of characters and the characters are the muses for the outfits they’re wearing. Some of the looks that were created tell the story of this full world and weren’t solely made to make a profit. 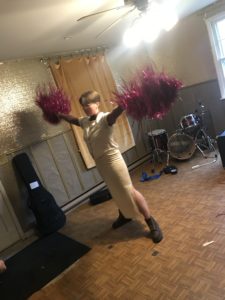 (Cybelle plays commercials for me that were made for the collection. Each is around 1-3 minutes long and include characters from the world of Tiger Beach)

Marlos: Whats the name of your latest collection and how did it come about?

Cybelle: Its called Party Aminals, a Tiger Beach Production. So i grew up in a school bus and in punk houses, raised in counter-culture. My mother was the Black Sheep of a wealthy family from New York. I learned to sew at a young age to have clothes and thats how I got into fashion. A couple years ago a cousin had these 100 year old vintage lynons from our great grandmother, and she sent them to me. I ended up repurposing them onto a pair of coveralls that ended up on CBS This Morning with Morgan Wade. My aunt saw this and sent me more material and in that collection were some psychedelic quilted ponies on placemats.  That was the inspiration for this collection, Tiny Prancer.

Marlos: When did you realize that fashion design was the way you wanted to express yourself?

Cybelle: I think fashion design is just one of the ways that I like to express myself. My background is painting and sculpture. I’m also a musician. In some type of world where money weren’t an issue, I’d probably be trying to make crazy productions like this all the time! What I like about fashion is how you can take a piece of fabric and turn it into something else. I also fashion as a medium because it’s really loud. Im really into fashion history too. 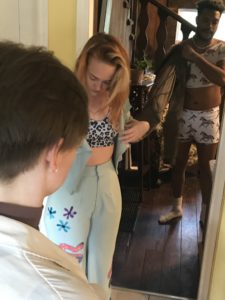 Marlos: Im interested in how important is color for you in your design choices and does it change between each collection?

Cybelle: I like color theory, sometimes i like to call it color psychology. I’m not very mystical or deep into the Woo, as they say. Where i find divine inspiration comes from understanding the things within nature that can effect our mental state; and color is one of the many/important things that does that. So i would say color is pretty important. But you can definetly catch me in all Black quite often (both laugh again)

Marlos: Oh that’s one of my favorite choices! What or where is the value in fashion design for you?

Cybelle: Hmm, I feel that fashion is valuable because it’s a vulnerable medium. It’s literally on your body; out there for everyone to see. 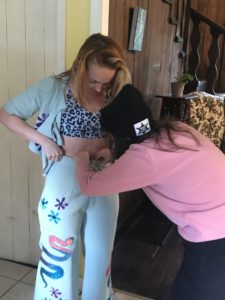 Marlos: How did Party Aminals come about?

Cybelle: Well, I always name my works just like you would name a painting. I started thinking about some of the earlier characters, Wendy Wildcat and Vicki Venom and what their personalities would be. I wanted to explore the idea of this world where everyone was named after an animal, but its a modern take on a spirit animal. However its not necessarily displaying the flattering attributes of these animals. For instance, Vicki Venom is a little snake!

Marlos: Last question. When tomorrow comes and you can be in your dream position, what would that look like?

Cybelle: (takes a moment to reflect) I would love to continue to be in a position where I can produce and art direct projects of this nature; creating whole worlds! I don’t wanna box it in but I’m interested in doing more work for theater and film as well. Thats my ideal position, to keep doing whatever I want as a creator!

Marlos: Wow, I sure appreciate you, and thanks for sharing more of your story with us!

Cybelle: Glad to. You coming to the show Saturday?

Marlos: I’ll be there! Wouldn’t miss it for the world!

I went to Cybelle’s fashion show a few days later at the American Legion, and It was truly an unique experience. Each model was also a performer in this stage play that takes place at the Tiger Beach prom. They all had speaking rolls full of humor, sarcasm, and their own personalities. There were even live bands performing all night and a principal running around looking for a good time while tryna stop the students of Tiger Beach from having too much fun.

IG- @cybelle_elena     There you can find a linktree in her bio 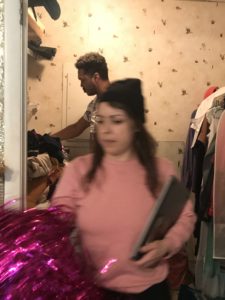