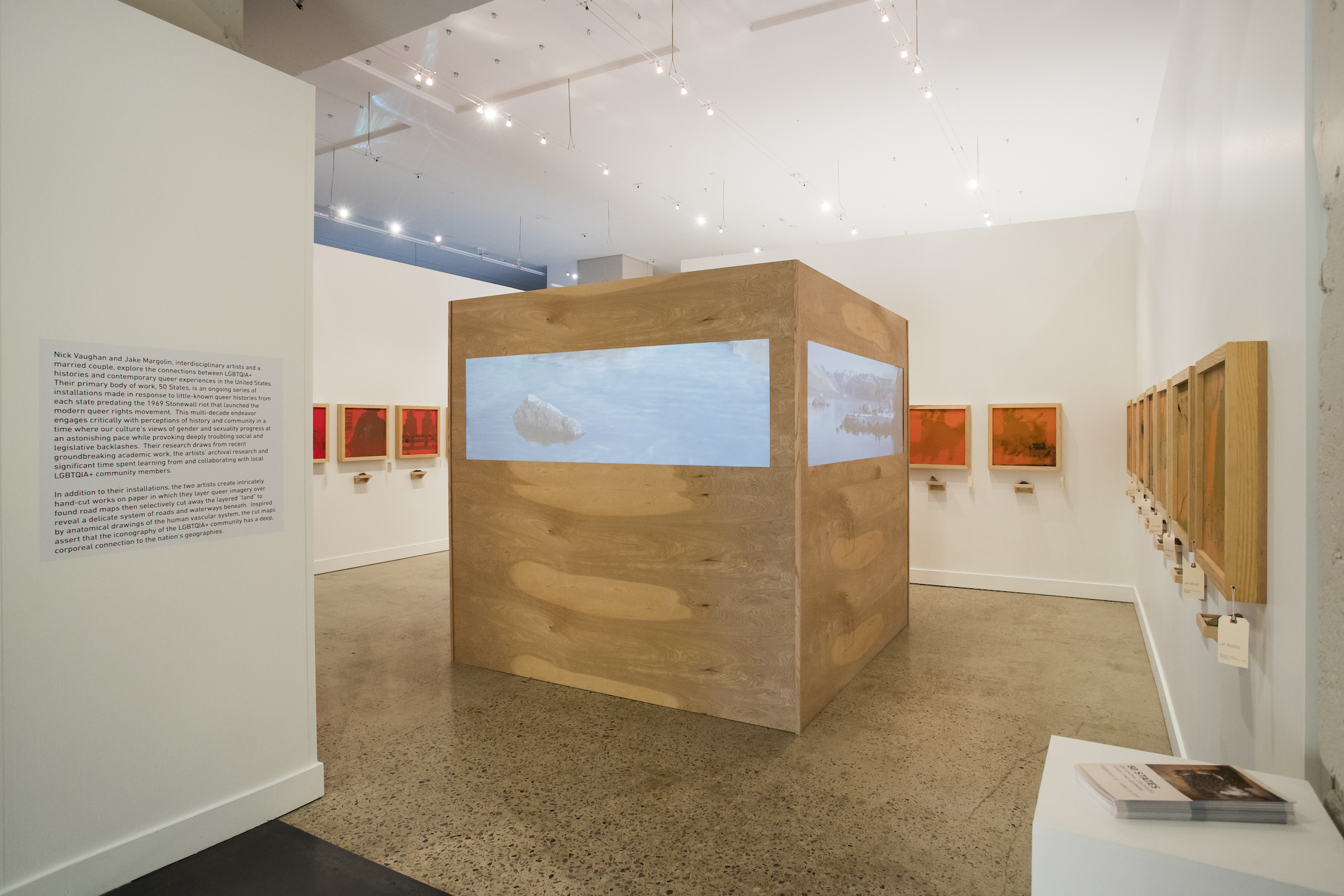 I write this review on June 30th, 2019. Pride Month. Celebrated in June to commemorate (sans Vodka ads) the Stonewall Rebellion in New York – an event that occurred in the early morning of June 28th, 1969 – and widely considered to be the beginning of collective visibility for the LGBTQIA+ liberation movement in the United States. This year, however, it is not simply New York celebrating this fifty-year milestone. Global festivals, parades, and demonstrations began Friday evening of this weekend, celebrating and reflecting on this movement and its history.

Numerous art exhibitions, lectures, discussions, video screenings, calls for action, and workshops recollect this event this month; how the collective local and global “we” operate after 50 years. Artist-collaborators and husbands Nick Vaughan and Jake Margolin consider 50 and U.S. history through a compelling and durational aesthetic that extends beyond the fleeting, pop-up hashtag culture that has surfaced this month. 50 States: Oklahoma, Colorado, Texas, and Wyoming, exhibited at the Oklahoma State University (OSU) Museum from February 12th to June 29th, 2019, is part of the nationwide 50 States project that intimately examines LGBTQIA+ history/ies in each state. 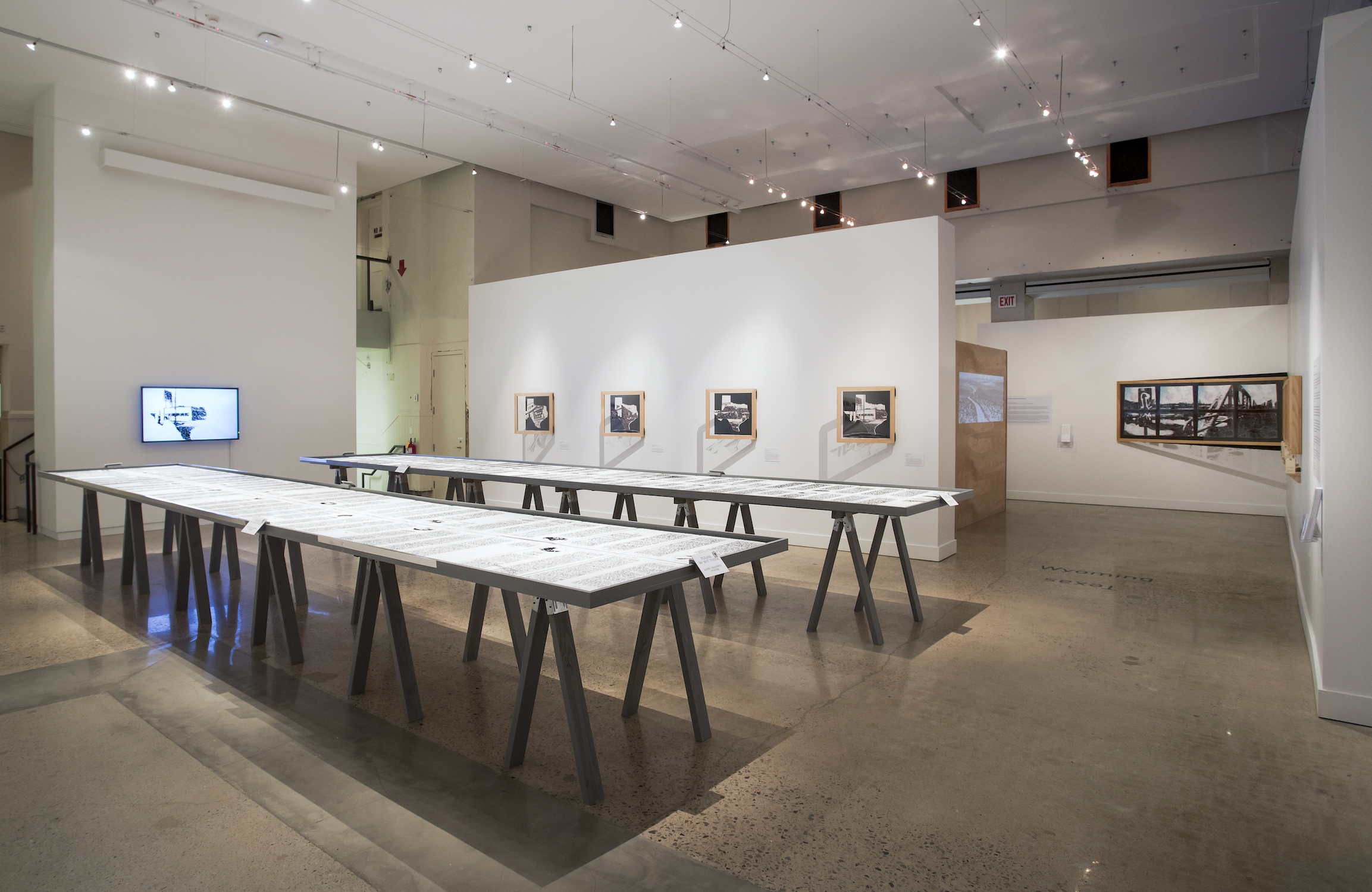 The exhibition offers discrete installation rooms for each state. These installations blend historical fact, video, experimental sculpture and drawing methods, and testimony. Each offers the viewer an opportunity to reflect on how the project of history is one that evidences itself in a multitude of simultaneously sundry and cyclical forms; there is no one way of finding it, and there is no one way of telling it. Nick and Jake operate as an artistic platform rather than artist-centered historians.

Wyoming consists of a four-walled projection box of landscape surrounded by framed Wyoming dirt embossed within Marlboro Man-style gay cowboy silhouettes. Wyoming-remnants are materialized through a 1,200-mile journey led by William Drummond Steward and his lover in 1843. Texas manifests as loose graphite on paper in a Sapphic novel written in 1895 by John Wesley Carhart, a doctor from La Grange. Akin to Wyoming, this inner narrative receives a spatial hug from works on wall: intricately cut Texas state maps reveal, through negative space, sites of historic gay and lesbian gay bars across the state. Finally, a video of the maps using the loose graphite, which disappear like dust, stands between the two installation components. I cried watching this video. Queer/minoritarian history is fleeting, one(s) that are delicate, scarce, in/visible and always ready to be remade into new forms of assimilated/stolen identity. 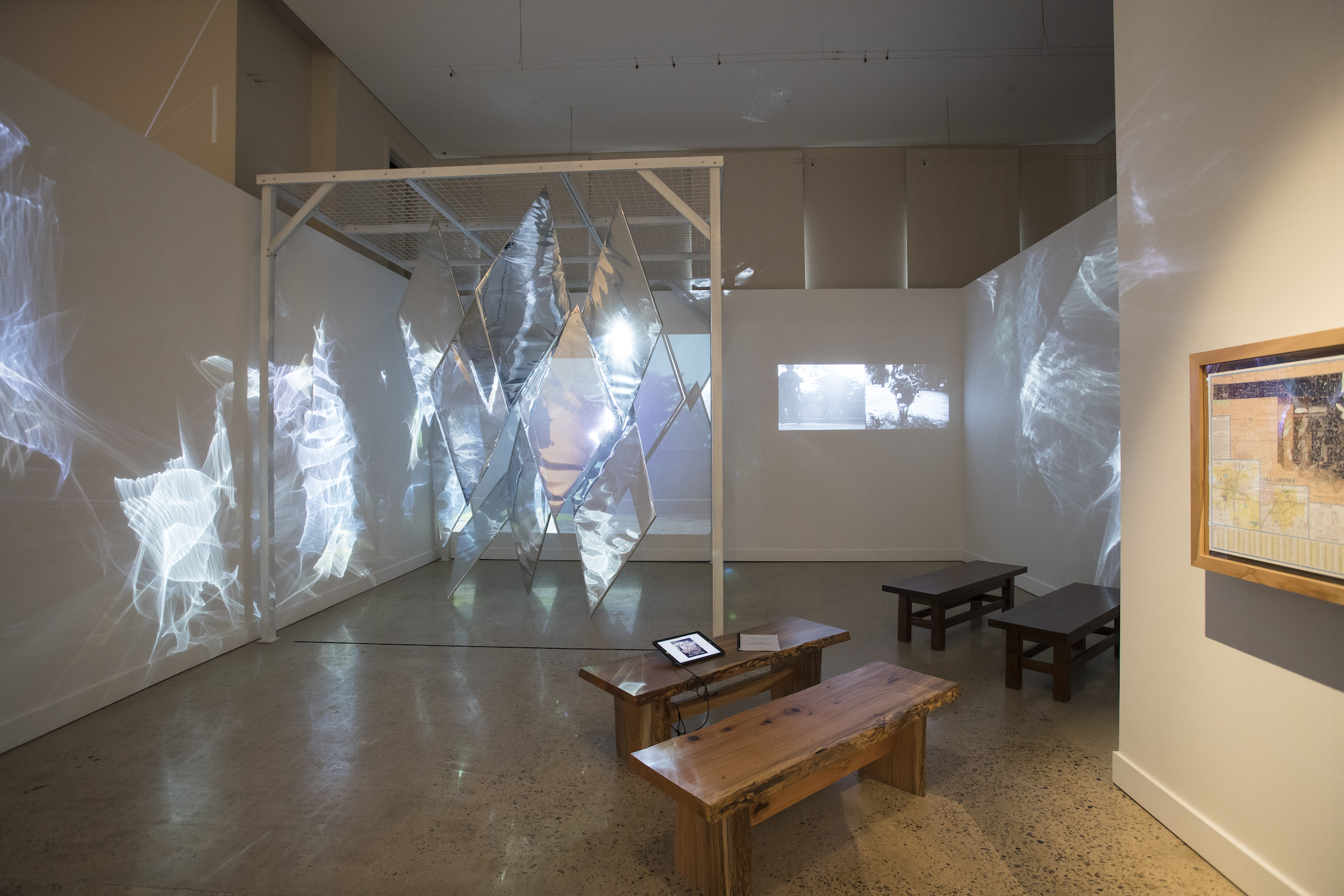 Oklahoma focuses on gay architect Bruce Goff in conversation with Lynn Riggs, known for his play Green Grow the Lilacs (Oklahoma!). A sculptural interpretation of Goff’s Crystal Chapel for the University of Oklahoma – never to be realized as Goff was forced to resign for being homosexual – intersects a video interpretation of Riggs’ 1931 film A Day in Santa Fe featuring LGBTQIA+ community in Tulsa and Tahlequah alongside Two-Spirit gathering archival footage in Discoveryland. This room offers a space to contemplate form and relationships – pews encourage sitting alone, together – watching abstraction and subjectivity prismatically collide.

Colorado refrains from objecthood: this five-channel video installation invites gender non-conforming artists, writers, and activists to honor and toast Charles “Frenchy” Vosbaugh, a Trinidad, Colorado citizen from turn of the 20th century, who was assigned a female gender at birth while ill; Trinidad was known as the “sex change capital of the world” due to its thirty-year sex-affirming clinic. Under the care of nuns, Frenchy worked as a clinic orderly and was known as “Grandpa.” Colorado and Texas, two places in which queer community/visibility are wrought. Trinidad, are both marked with tenuousness reflecting national trends toward gender-affirming life. 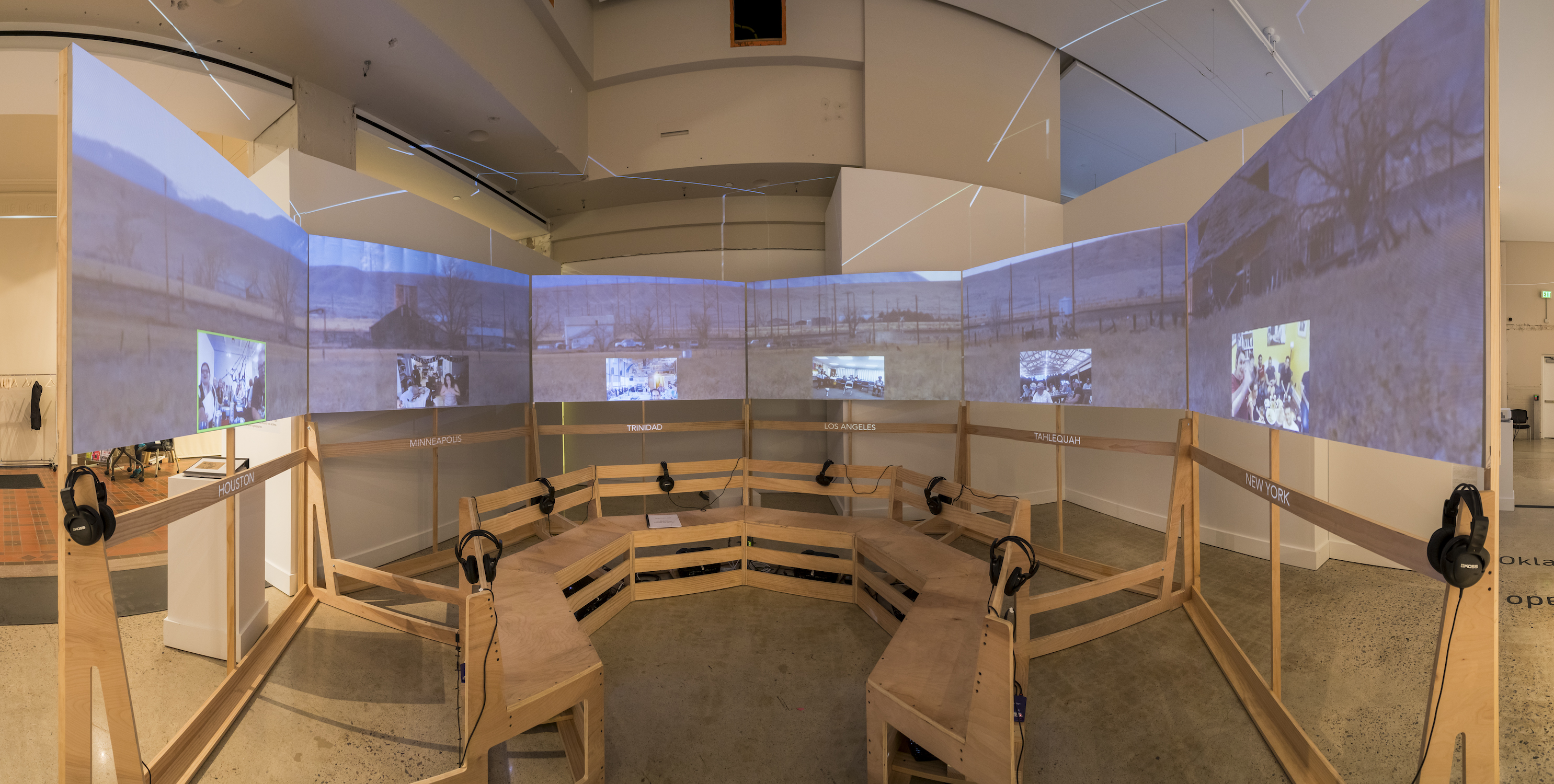 At their most poetic, Nick and Jake remind us that they have excavated a fraction of the moments, histories/herstories, spaces alive-forgotten-abandoned-silenced, ever-shifting and swelling subject of the Queer West, the American West, American LGBTQIA culture, and Americanism. Each decision is so well thought out that the viewer is left, not with a closed argument, but an opportunity to reimagine personal/collective narrativization; possibilities for extrapolating fact/myth (mythical fact?) into concrete and ephemeral (decaying) materials. It will be powerful, unnerving, contemplative, wonderfully overwrought, and unmistakably considered to see how the next 46 states concretize.

50 States: Oklahoma, Colorado, Texas and Wyoming, an exhibition of work by Nick Vaughan and Jake Margolin, was on display at the Oklahoma State University Museum of Art from February 12th to June 29th, 2019. Jessica Borusky is the Executive/Artistic Director at Living Arts of Tulsa.