Return and Revisit: A Conversation with Sherrill Roland 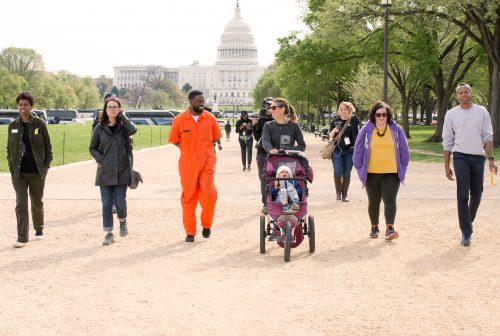 Sherrill and I both grew up in Asheville, North Carolina. We went to the same high school. We sat in the same row in our AP Art History class. We both attended college in state. We both went to graduate school. And yet, one of us ended up in prison for ten months and one of us didn’t.

The last time I saw Sherrill was at our 10-year high school reunion in August of 2012. He was just as I remembered him—quiet but also very charismatic. Neither of us knew it at the time, but about a year later, just as he started his second and final year of graduate school in the MFA program in Studio Art at University of North Carolina at Greensboro (UNCG), Sherrill would be convicted of a crime he didn’t commit and sentenced to 13 months in prison. He would spend 10 months and two weeks in prison in Washington D.C.—missing the birth of his daughter and funerals of both his grandmothers—an experience that would indelibly affect his life and, by extension, his artistic practice.

I’ve been following Sherrill’s career since he was finishing his MFA in 2017. This is when I first learned about The Jumpsuit Project (2016), which began as his thesis work, walking the UNCG campus in a bright orange jumpsuit that closely resembled the one he had worn while in prison. The project served as a way for him to confront his experiences directly, but also as a platform for communication with others about incarceration on a variety of levels—from personal to systemic. The project has since become an acclaimed, ongoing series of performances given in galleries, museums, public libraries, and college campuses around the country. Below is a recent conversation I had with Sherrill—catching up and processing what art making really means after such a profound experience. 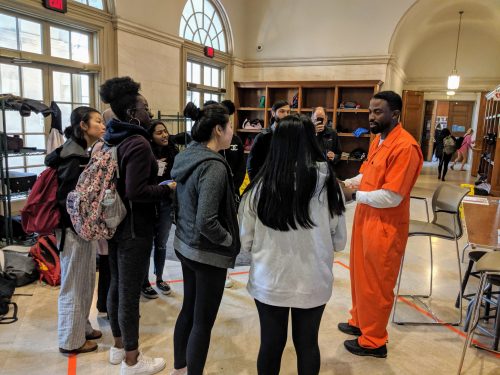 Patricia Lee Daigle: Can you speak about The Jumpsuit Project? What did this project do for you personally? For your career?

Sherrill Roland: The Jumpsuit Project was selfishly started for me at a desperate time in my life. I was desperate to figure out how to move forward after being wrongfully incarcerated and deal with all the complexity it added within my life. This was an attempt to learn how the community outside of my inner circle of friends and family would view me once I disclosed this experience. I found that I wasn’t the only person concealing the burden of incarceration, and I wasn’t the only person feeling like nobody else would understand my traumas. Personally, this performance work has allowed me to find purpose in the aftermath of being broken by our justice system.

What was it like forcing yourself to return to this experience?

Even though I was released in August 2014, I was still on probation. It took almost a year and a half for my record to be wiped clean. I couldn’t even get a speeding ticket. I had to live for a year on thin ice. Eight months after my exoneration, I went back to grad school. But it wasn’t the way I remembered it. I didn’t feel free. I didn’t want to meet up with people or be social. That contrast between the two environments—prison and the university—is what made me want to break this way of thinking and feeling. By wearing the jumpsuit, I put myself back in the situation. Emotionally, it requires so much to put this jumpsuit on my body. My paranoia and awareness for safety increases more than normal once I start wearing the jumpsuit in common spaces, where I have every right to be. To this day, there’s still hesitation when I put the jumpsuit on. 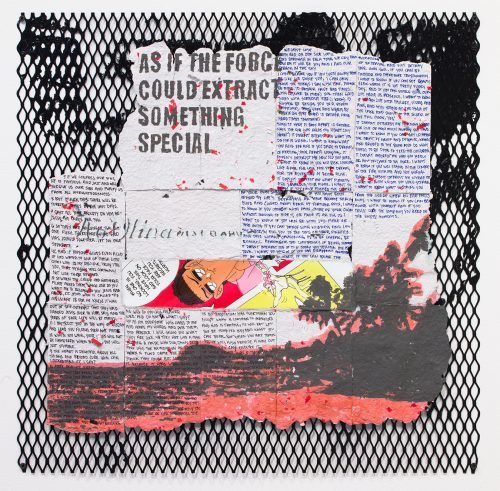 Your process and even the materials you use as a multi-disciplinary artist seem to be informed by your time being incarcerated. Has your practice been largely dominated by this experience?

In the beginning with the jumpsuit, it was very directly tied to me personally. Now, every day I’m further removed from it, and I’m getting help by talking to people through this project and expressing this experience through art. My practice still can be very direct, but it’s becoming a little broader and more abstract, and losing some of its directness visually. For me the idea, experience, or narrative from that experience will dictate the materials and the way the work is made. 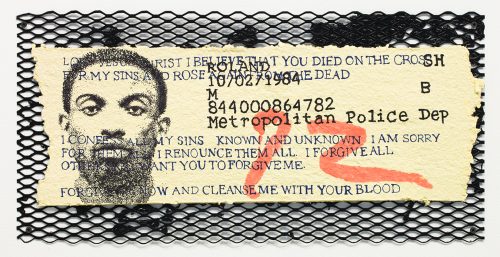 Most of the materials you use in your work are those that can be found in prison. Is there something about returning to that experience through these materials that holds significance for you?

In prison, I saw some of the most creative things being made by people who did not refer to themselves as artists or what they were doing as art making. Going from grad school directly to prison, I was in this mode of thinking about process and art making, and I see these other men bring out stuff they had made, completely unaware they could do this. They just didn’t have anything, and the creativity was born out of necessity. Now that I’m out of prison, I have all the resources in the world, but I still want to keep the integrity of that experience. These are the materials I had and this is what I have to work with, what can I create.

It’s impossible to not think about race when it comes to our criminal justice system and rates of incarnation. How much does race factor into your work?

I never directly say it, but in talking about my case, the one thing I had to get a grasp of was how I look and how I move through the world. While incarcerated, I read Michelle Alexander’s The New Jim Crow: Mass Incarceration in the Age of Colorblindness, which discusses the high conviction rate of African-American men in D.C. And as I’m reading this and looking outside of my cell, I realized, “This is really real, not just statistics.” In court, I was on a docket with about 30 other people; who I was when I entered into that courtroom was a significant. I was fighting against the statistics for my race before I even began to fight against the false charges. The incarceration rates are already high for African American men in this country and, statistically, I had a higher likelihood to be convicted in Washington, D.C. versus in my hometown in North Carolina.

How has being from the South impacted your work?

Coming from North Carolina and going into that space in D.C., I kept my mouth shut. It was different. Other inmates would say, “You’re a Washingtonian now. You’re in here with us.” It was almost like a rite of passage. I became aware of what that particular jail meant to that community. The District of Columbia, our nation’s capital, was the weirdest place to get into this kind of trouble. It doesn’t function as a state and has different federal laws and levels of bureaucracy. So, coming back to North Carolina and most recently, in my time as a Post-MFA Fellow in the Documentary Arts at Duke University’s Center for Documentary Studies, I began to learn about my state with new eyes. I started talking to lawyers at Duke’s Wrongful Convictions Clinic and told them about my situation. I learned that certain laws that apply in D.C. don’t apply in North Carolina and that my situation would have been totally different. I didn’t know my home like I thought I did. I started speaking with other people wrongfully incarcerated in North Carolina and other communities I visited through residencies and exhibition opportunities. But, I want to remain in North Carolina. My daughter will be raised in this state and I want to give back to the community here.

The Jumpsuit Project in many ways defined your practice as an artist. What relationship do you have with this difficult experience now that five years have passed? What are you working on now?

I’ve been making what I call “weights.” When I was incarcerated, my cellmates and I accumulated a lot of legal documents from a law library we had access to because he was reading them to help his case. He printed out so many documents that we ended up making weights out of them—putting stacks in to clothes baskets and tying them up. I ended up recreating these but the documents are legal dockets relating to North Carolinians who’ve been wrongfully incarcerated. While at the Fountainhead Residency in Miami this past August, I also began to elaborate on earlier work made from handmade paper and letters I received and sent during my incarceration. I decided to rewrite these letters on translucent paper, layered in a way where all of the honesty and vulnerability that used to be there now becomes illegible, like an abstract drawing. I’m at this place where I’m trying to give, without giving all of me away.

Sherrill Roland was born in Asheville, North Carolina, and currently lives and works in Raleigh, North Carolina. He received both his BFA in Design, and MFA in Studio Art from the University of North Carolina at Greensboro. He has presented The Jumpsuit Project at a number of venues including Alcatraz Island, San Francisco, CA; Addison Gallery of American Art, Andover, MA; Maria & Alberto de la Cruz Art Gallery at Georgetown University, Washington, D.C.; North Carolina Museum of History, Raleigh, NC; and Princeton University, Princeton, NJ.

Patricia Lee Daigle is the Director of The Martha and Robert Fogelman Galleries of Contemporary Art and Visiting Assistant Professor of Art History at the University of Memphis.