A Boundless Drop to a Boundless Ocean @ Orlando Museum of Art

All images by Flounder Lee 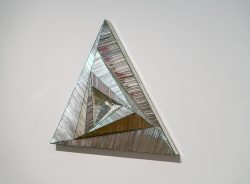 A Boundless Drop to a Boundless Ocean at the Orlando Museum of Art (OMA) explores the work of US-based artists of Arab and Iranian heritage. The exhibition was curated by Dr. Shiva Balaghi, an independent scholar and curator based in Los Angeles, who has taught at New York University and Brown University and regularly contributes writings for museums and art publications. With 21 artists and 35 works, the show is not predicated solely on one theme nor political issue, instead the wide range of artists with their respective backgrounds work against a universal or essentialized Arabian or Iranian experience. 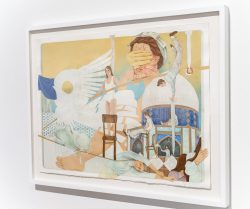 The exhibition is built around the immigrant’s experience, which is approached through myriad formal and conceptual strategies that are at times explicit, indirect, or subversive, allowing for interplay between varying strategies to provoke, seduce, and confound the viewer. Arghavan Khosravi’s Simurgh (The Muslim Ban Series), best represents this multifaceted approach—consisting of scanned images of the artist’s Iranian passport which removes much  of their bureaucratic and political origins and instead become a disjointed and figurative tableuax. This act of abstracting documentation into narrative could be seen as a decentering response to such rigid forms of control and organization, the arbitrary nature of borders, and the delineation of spaces. The passport denotes who is and isn’t allowed access and becomes imbued with more than mere objecthood. In our ongoing national conversations framing who is considered safe for entry into the US and who is considered a threat or racialized Other—it is worthwhile to think about how we label whole groups as immigrant, migrant, expat, illegal, and/or banned, and also the impact placed upon these identities when relegated to objects like paperwork, documentation, or passports. 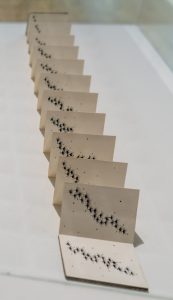 Pouran Jinchi’s Dandelion Clouds and The Book of Dandelions 1, are delicate and delightful. The repetition of simple dandelion seeds allows seemingly infinite variety and the iterative, yet generous approach to such fragile subject matter possibly speaks to temporalities, transience, and metamorphosis. Second Family – Triangle by the groundbreaking artist Monir Shahroudy Farmanfarmaian works in a similar way through a delicate selection and assemblage of materials with a range of cultural signification both specific and poetic and can be seen as the anchor of the show. The layered complexity and masterful use of space in Diana Al-Hadid’s sculptural installations eludes any comprehensive photographic or bodily vantage point, which is precisely what makes these sculptural works so spatially dynamic and absorbing in person. The same could be said about Ala Ebtekar’s Thirty-six Views of the Moon, which consists of 59 cyanotypes on found book pages—the intimacy of paintings made on book pages requests a closer viewing while a secondary image of the moon becomes apparent from viewing the constituent pieces from afar. 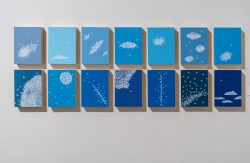 The exhibition is a fitting example of what Maura Reilly calls “curatorial activism,” which aims to ensure that, “certain constituencies of artists are no longer ghettoized or excluded from the master narratives of art. It is a practice that commits itself to counter-hegemonic initiatives that give voice to those who have been historically silenced or omitted altogether—and, as such, focuses almost exclusively on work produced by women, artists of color, non-Euro-Americans, and/or queer artists” (Reilly 2017). 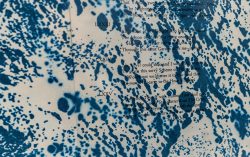 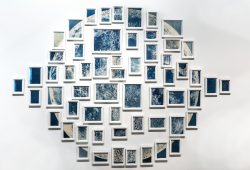 Ala Ebtekar, Thirty-six Views of the Moon, 2019

Institutional spaces are clamoring to decolonize their collections, curators, and ideologies and exhibitions of this scale and scope aim to initialize these crucial steps towards more equitable and just museum settings. Museums have a responsibility to respond to the world outside of their walls. Orlando is twenty-two percent foreign-born (United States Census Bureau 2019), not to mention second and third generation citizens and undocumented workers, so a show dealing with migration/immigration is of a specific importance and topicality. 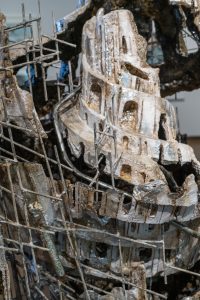 A Boundless Drop to a Boundless Ocean, curated by Dr. Shiva Balaghi is on view at the Orlando Museum of Art from January 29th to May 2nd, 2021.

Heing, B. Fefb 17, 2016. A Portrait of an Iranian Artist Who Went Home After 25 Years in Exile. Hyperallergic. https://hyperallergic.com/276470/a-portrait-of-an-iranian-artist-who-went-home-after-35-years-in-exile/.

Orlando Museum of Art. “A Boundless Drop to a Boundless Ocean. Art of the Iranian-American and Arab-American Diaspora.” Accessed February 20, 2021. https://omart.org/exhibitions/boundless_drop_to_a_boundless_ocean/.

Flounder Lee (he/him) is an artist/curator/postgraduate researcher in Art &amp; Media at the University of
Plymouth, UK. He received his BFA from the University of Florida and his MFA from California State Long
Beach—both in studio art and photography. He taught full-time at universities in the US, Malaysia, and
Dubai for over a decade. Several overlapping themes run throughout his work: decolonialism, mapping,
science, futurisms, and environmental change. He is media agnostic but often turns to photo, video,
performance, sound, and installation to create work that touches on these topics. Many of the same
themes and media are also part of his curatorial practice, but it is broader than his art practice. His
recent work (and PhD project) deals with a quotidian, decolonial future through artistic and curatorial
perspectives. He is especially interested in mundane devices from these futures, futures that are more
fair for more people. He strives to be anti-oppressive in his approaches and outcomes (anti-racist,
decolonial, anti-patriarchal, anti-heteronormative, inclusive, and intersectional).

You can find him on most social media or at www.flounderlee.com