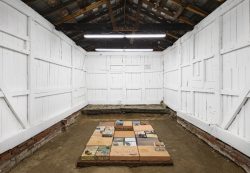 Those born in the Chicago area are closely familiar with the tragedy of the Great Chicago Fire of 1871. Mythology holds that it was ignited by Catherine O’Leary’s cow tipping over a lighted lantern, setting the mostly wooden city alight and destroying over 17,000 buildings. The red blaze gave way to rebuilding a red-bricked city and the Chicago Common Brick was born. This brick was made from the deposits around the Chicago river and its tributaries and the clay source included bits of iron and lime and other particulates that gave it a rough appearance and, depending on the batch, produced a wide range of colors from deep sienna to pale naples yellow folded into the color of an oxidized penny. No two bricks are the same color. 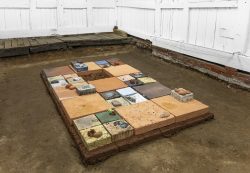 These Common Bricks were saved for the sides and backs of buildings, never getting their turn in the sun. Under the care of Chicago-based artist E. Saffronia Downing, agency and long deserved attention is given to the idea of a Common Brick so that the viewer can pay attention to what was once behind, yet now being pulled to fore. Field Dug Over is a process of revealing. 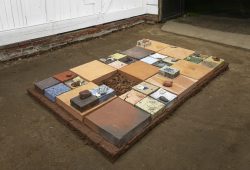 The ceramic sculptures are low to the ground and tessellated on an unfired clay dias in the center of the rough hewn, dirt floored chapel that is Bad Water gallery. The craggy surfaces of some of the squares are reminiscent of dried river beds while others are like soft bellies, sunk in the center. The blue glazed squares are the color of lichen developing on trees. I wonder if they would be warm to the touch, either from the fire of the kiln or the life teeming within. 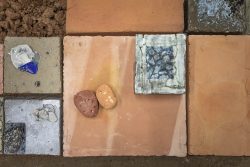 Both Downing and gallerist Kelsie Conley talk about the folding and transitioning of earth and the movement of mountains. Presented in the gallery, the mountain ephemera reads like shifting plates on the earth’s mantle, there is a notion that they all existed as part of some pangea clay body but have since created independent identities and material compositions. The objects placed on top of the clay bricks are like water washed stones collecting in shallow pools. 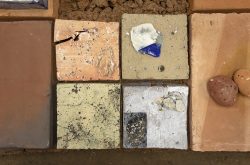 It may be harsh to relate Downing’s empathetic formations to the mechanical processes of Common Brick making but there is value in the conversation between kinds of time. The time it takes to wash the edges off of rocks, the time for clay to be fired, for a city to burn, or for mountains to move. In Field Dug Over time is the recognition of transference between states of place and being in order to find what was always already growing. 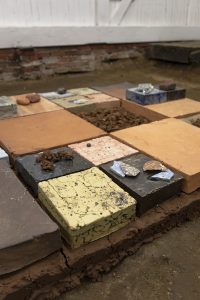 About the artist: E. Saffronia Downing (b. 1992) works with clay to map material residue across time and place. She received her BA in Studio Art from Hampshire College and her MFA in Ceramics from School of the Art Institute of Chicago. Downing forages local material to create site-specific installation and sculpture. She is the co-creator of the digital publication Viral Ecologies. She currently teaches the sculpture course Knowledge Lab: Craft Ecologies at the School of the Art Institute of Chicago. Downing is the recipient of awards and residencies such as the Oxbow School of Art Fellowship, ACRE, and Salem Art Works Studio Artist Residency.  Her work was recently featured in the Fall 2019 Setouchi Triennial in Japan. She has also exhibited nationally at numerous institutions across the country.

About the writer: Lilly Saywitz (b. 1994 IL) graduated with an MFA from the University of Tennessee, Knoxville in 2021. She received a BFA from Boston University in 2016. Saywitz has exhibited at Gallery 263 (MA), Dorchester Art Project (MA), ZG Gallery (IL), Gallery 1010 (TN), 333 Arts Chiyoda (Tokyo) and East Tennessee State University (TN). She has written for the arts and culture magazine, Big Res & Shiny in Boston, MA. She has held positions on the board of Dorchester Art Project and was a founding member of Witch Mountain Gallery and the zine publication, 5-9 Journal. In October 2021, she will travel to Lisbon, Portugal as the Artist in Residence for Zaratan Gallery.