Images by Will Douglas 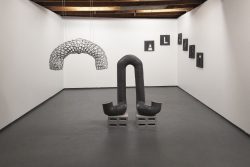 The two dominant languages of our built environment have seemingly collided. Defined by Keller Easterling in the introduction to Extrastatecraft as, “a soupy matrix of details and repeatable formulas that generate most of the space in the world,” the realms of architecture are becoming increasingly subsumed by the mode of infrastructure 1. Traditionally viewed as the neutral substratum and enterprise for organizing and mediating the spaces between landscape and architecture, infrastructure has seemingly become the choice-par-excellence for the projects of global urbanism and late-capitalism. Kellerling explains further:

“Buildings are often no longer singularly crafted enclosures, uniquely imagined by an architect, but reproducible products set within similar urban arrangements. As repeatable phenomena engineered around logistics…[at]…the bottom line they constitute an infrastructural technology with elaborate routines and schedules for organizing consumption.”  2 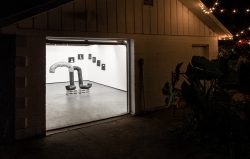 As cities become increasingly “smart” the technological and modular nature of infrastructure is clearly more efficient in any development or urbanization project. But what is lost in this transition, (mis)translation, and/or abandonment? As logistics is the “science of capitalism,” and infrastructure is facilitated through logistical flows, one could therefore argue that infrastructure has become emblematic of capitalism’s quest in consuming and controlling all physical space—which in turn implicates human and non-human bodies and our concomitant psychological dimensions as well 3. 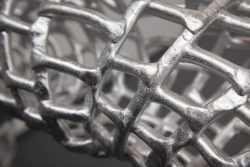 The infrastructural language itself is a lexicon that we can enter into and read like a map—pipes, stairs, interstates, and stop lights all signify, yet this visual immediacy constitutes only a fraction of the agendas that are always driven and constructed by those in power 4. These projects of development are never truly neutral activities. All languages are at the behest of the state and its interests, which factors not only into linguistics but visual and semiotic, phonetic, haptic, and affective modes of communication. Moreover, standardization and homogenization of information and communication is used to co-opt and control space, language, and identities as a tactic for maintaining sovereignty, therefore these languaged forms are always political. 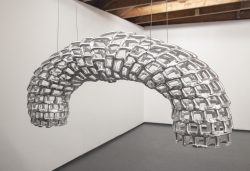 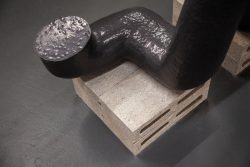 Iren Tete’s ceramic objects and installations collapse languages of both the structural and linguistic order. The hand-crafted objects recall the cold logic of schematization that is belied by, and confused in the subtle imperfections in scale and proportion and the tenuous nature of their fabrication. In this space between these industrial-infrastructural and human-organic forms a new language is being developed. The disciplinary language of ceramics is challenged here by tricks of concealment, mimicry, and duplicity—warping the plasticity of the materials redundantly, yet effectively, into more materials–ceramic as rebar, ceramic as pipe, ceramic as brick, ceramic as mortar. Under these conditions even the cinder blocks serving as plinth become double-speak. In this space of tension these sculptures challenge our need for aestheticized, beautified, yet functional “public” space, the intimacy and familiarity of personal or private space, and the fluctuating and/or misplaced emotional registers of both. 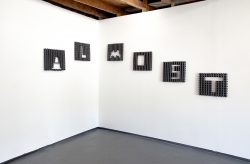 The oftentimes explicit nature of text art is subverted here by a strategy of redeeming through redefining. The viewer is given the opportunity to eschew meaning and to indulge in dueling perceptual states—a multilingual exchange between materials, symbols, and form. The word ALMOST—with all of its fragility and ambivalence—here becomes a token for the anti-logistical. Spelled out in ceramic wall pieces, the contour of letters is found precisely in the spaces that are not structured or consumed. The viewer is looking through the crafted structure, forming a letter in empty space while clinging to the grid in which the lacuna appears, where the word spelled becomes inversely full of potential, as Tete puts it. These contradictions work to regain power in language as they allow for ambiguity, dissonance, and retooling. The infrastructure and logic of these armatures persist through their causal relationships toward failure: the porous will leak, the fragile will break, and the empty will be consumed.

Porous Thoughts & Fragile Moments will remain up through May 29th.

About the artist: Iren Tete (b.1990) is an artist originally from Sofia, Bulgaria who is currently based in Gainesville, FL. Tete is Adjunct Assistant Professor at the University of Florida and was recently Visiting Faculty in Ceramics at the Alberta University of the Arts in Calgary, Canada. She earned an MFA in Studio Art from the University of Nebraska-Lincoln in 2019. Tete has exhibited solo exhibitions at Galleri Urbane (Dallas, TX), Gallery 371 (AUArts, Calgary, Canada), and The Lee Dam Art Center for Fine Art (Marysville, KS), among others. Her work has been featured in numerous group exhibitions, including shows in Nebraska, Texas, New York and Florida. In 2020, she was selected as an Emerging Artist by Ceramics Monthly Magazine and as a finalist for the Hopper Prize. Tete has recently exhibited at the Dallas Art Fair and UNTITLED, Art Miami Beach. This year her wok will be featured in two biennale exhibitions – Latvia Ceramics Biennale (Daugavapils, Latvia) and Officine Saffi (Milan, Italy).

About the writer: Bradley Marshall is an artist, writer, and educator from Nashville, Tennessee. He earned his MFA from East Tennessee State University in 2018 and attended the Skowhegan School of Painting and Sculpture. He is co-editor of Number Inc. Magazine. His work and writing has been exhibited/published nationally and internationally, with recent exhibitions at Houston Center of Photography (HCP) in Houston, TX and Stove Works in Chattanooga, TN.