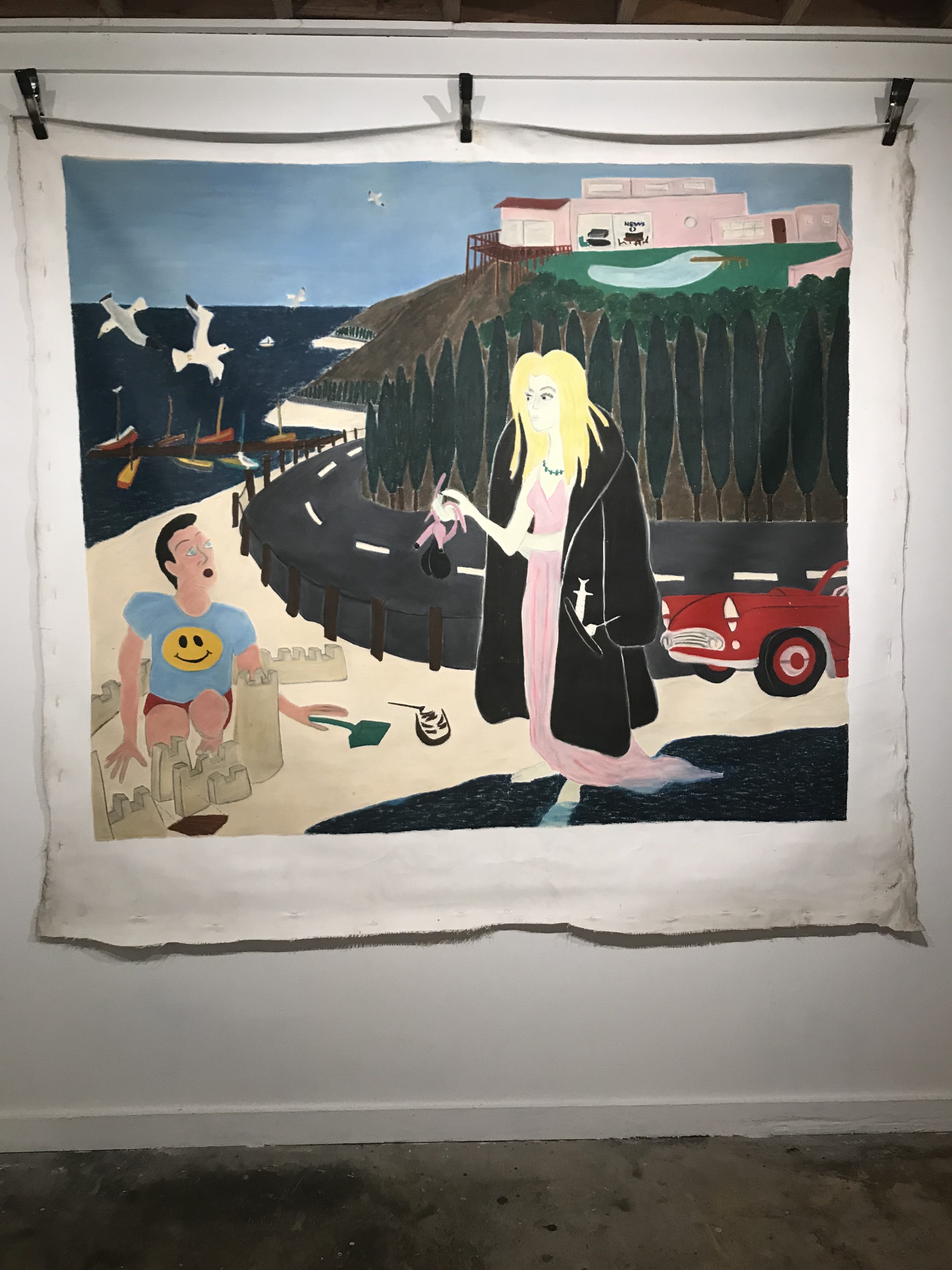 Situated in the shadow of a few shiny high-rises near downtown Raleigh, North Carolina, Lump hangs low key with a gradual gray A-frame and red plastic letters LUMP below its gable—but inconsequential it is not. As a North Carolina born-and-raised artist who went to school in Chapel Hill, this space has always occupied a considerable and necessary space of potentiality in terms of how it can create community and promote idea sharing in the Research Triangle and beyond. It has been supporting risk-taking and exposing North Carolina citizens to art since 1996. In an area like Research Triangle Park (RTP)—speckled with big pharma and tech companies and relatively far from the art world centers—Lump is a lifeline. I encourage the denizens of the triangle and beyond to support this place. So, are you, you “selfish beaches”?

At Lump this past December, Paul McMahon and Nancy Chunn presented their series SONG PAINTINGS in It Takes a While to Figure Out Who You Really Are. Made up of ten large-scale works, SONG PAINTINGS have only been on simultaneous display once before at Artists Space in May of 1982 – smack dab in the middle of New York’s No Wave scene. They were initially conceived of and used only once as backdrops for McMahon’s singer/songwriter performances. Each painting is approximately 6 x 6 feet, oil on canvas and a literal illustration of its respective song.

“Pick Me Up, I’m your disposable lover.”

But I’m saving my heart for the magazines.”

This is a sample of the song lyrics that complement the paintings of a giant green god, legs spread over a field of flowers and accompanied by a scattering of mostly-white, mover-and-shaker-type artists. A movie star, her pockets stuffed with syringes, interrupts a young man building his sand castle. In another, a young artist stands in front of his penis paintings while ejaculating into an audience.

In addition to SONG PAINTINGS, there is video, 2-D work, and sculpture by McMahon. The video Mild Style features a really bad, white break dancer; it is a piece that riffs on the film Wild Style (1983). His body humor continues in the dysmorphic, mylar face reflections found in the quasi-operatic meditation SONG OF THE STATUES set in Home, NY; it includes collaborative works by Cindy Sherman, Michel Auder and Dorit Cypis.

McMahon is funny, and I think humor is a thread throughout his work from sound paintings and video art to bumper stickers and buttons. However, there is also a recurring theme of failure: the idea of the failed starlet, celebrity, and maybe even political activist. Much of It Takes a While to Figure Out Who You Really Are—like the clips from the All Access television show—remind me of what was happening with LA’s early cable TV show, New Wave Theater, and the more modern Eric Andre Show. At times, these shows deconstruct the star in an absurdist, collaged, non-linear, variety-show-like fashion.

Back in the gallery, you can watch the show from a dirty couch with a cowboy hat lamp next to it that makes the gallery space feel like a 1980s basement; this can make the viewer feel dissonant but also strangely connected. This discord could have emerged from the No Wave scene where musicians and artists regularly crossed over and occupied each other’s spaces. McMahon’s first album was released in 1986 on Neutral Records, Josh Baer and Glenn Branca’s label (best known for launching Sonic Youth). Says Weasel Walter, No Wave was “constantly pushing the limits of idiom or genre and always screaming ‘Fuck You!’ loudly in the process.”

Standing there, looking at this work, it is interesting to think about what “Fuck You!” was in New York in 1982 to a relocated California artist occupying the downtown scene. Further, what is “fuck you” now, and to who, as I stand here in Raleigh at the close of 2018 looking ahead to a new year?

So, Raleigh residents, in words from another bumper sticker in the exhibition, IT’S LATER THAN IT’S EVER BEEN. I encourage you to visit and support Lump. I always look forward to whatever they bring to the region.

Ash is an artist based in North Carolina and Southern California.