…Came the guests and supporters of the Nashville Opera’s truly epic production of Das Rheingold.  The new Fisher Center for the Performing Arts at Belmont University seemed to spare few expenses in its construction. Designed by ESa, the architects for the Schermerhorn Symphony Center, similar flourishes adorned the architecture from gilded appliques to more modern prismatic art-diffusing spectrum-playing glass. Brilliantly reflective granite floor design worked like Donner’s magic hammer to guide us to the inviting stairs allowing guests to ascend to the main hall for the show: one Valhalla begetting another.

Epic was the word in the advertising materials and does in fact adequately describe John Hoomes’ visionary assemblage: computer generated video art, an apropos modular stage scaffolding, and the bold costume design of Matt Logan (who designs for Reba and enjoys the reflective properties of rhinestones – even when away from the Rhine). Blending graphic novel and post-industrial references for the gods, a fun almost-Victorian twist for Loge the trickster, and an almost apocalyptic take on the suffering beneath the surface of the Nibelungs- many of them children in real life- laboring under the power of the greedy vengeful head dwarf Alberich. 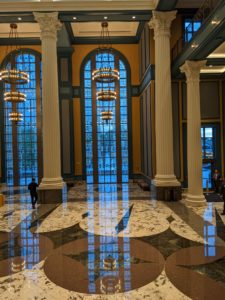 Opening night at the Fisher Center was worlds away from the understaffed restaurants across the street with the confused opera guests searching in vain for a pre-Valhalla libation (trick is to get it at the bar then go stand outside…or beers from the 7/11 on the corner). The exterior search was for their liquid ring, while inside the story relates to gold in the liquid – the story more accurately using the ring as a reference for purpose, meaning, the searched for truth perhaps. Similar to the religious milieu of the Fisher Center, Wagner’s universe builds upon a three-part world, a trinity of: (1) the underworld where the dwarves bang on anvils, (2) the world we inhabit where God s cut deals with giants to build (3) an above world: an opryland-like amusement park set construction for themselves (like current nashvillians also not knowing what their dark future holds for their home). The lighting and video work hinted at a Vegas meets Nashville construction-boom overwrought-architectural play.

The golden ring shining like the sun the object of desire also relates a celestial intergalactic never-ending nothingness even though (And perhaps because) it represents unlimited power. In that understanding Nashville Opera’s staging of Das Rheingold starts with the full 3.5 mins and a magical/mystical computer animated 2-story LED video wall rising from the Rhine bottom riverbed- bubbles coming to the surface transforming into stars in the sky, our understanding just one star of many shining in an ever-changing evolving spinning solar system in a galaxy and universe without end. Then playfully aggressively the video art explodes with a bright flash of golden light that introduces the choral effect of the Rhinemaidens. (While Wagner may have disliked the chorus as concept, he was able to use this team of individuals to similar effect). And the Rhinemaidens -perhaps a plot device but still each unique in their own right- lead us collectively and one by one to the river bottom bound gold desiring to be desired. Consciousness exploding out of the infinite nothingness.

A spectacularly large performance by the cast combined with the assembled vision of lighting, staging, and costuming helped amplify a performance that could have easily stood on its own just vocally. The voices of the gods and Erda completely filling this new enormous space in a way that allows them to go bigger than the still-quite-adequate room at their rehearsal space. The final room run at the Noah Liff Opera Center went from the river bottom to the mountain top almost flawlessly from this audience’s perspective. Watching John Hoomes work the Nibelungs into anvil-hammering shape and Allan Glassman’s Mime,  swimming in a sea of dwarves stacking golden painted cardboard boxes, helped highlight for me as an audience member the overwhelming challenges it takes to put on a show of this scale. From the Rhinemaiden’s introductory floating around the stage making sure to hit their hi-vis marks to their concluding choral pleas from offstage near the bathrooms, Just the vocal content alone is staggering.

Add into that rehearsal a spilling of Sprite by a young Nibelung from their Chick-fil-A cup, one realizes how much it takes to keep all the gears of an industrial staging going in harmony. Personally watching the nibelungs work together to clean up the sprite was refreshing: some going to the bathrooms to get paper towels, others picking up backpacks lest the stream of Sprite flow like the Rhine into their homework, And still others using their wits to find and return with a mop and cleaning supplies. Working under fear of admonishment and anxious energy, the child actors effectively took part in an impromptu team building exercise much like the characters they portrayed.

Reflecting on the banks of the sprite stream from which the Rhine maidens later pled together, thoughts wander to the art glass stream of light that comes in at dusk into the Fisher Center. A new Valhalla as supporters of the Arts. imbibing the waters of a gesamtkunstwerk, the complete work of art staging costuming music vocal interpretation all melted into a single product. With the Leimotifs and the afternoon light of the sun coming through the ring inside, We are the gods, And I can only hope that the momentum behind this performance helps propel John Hoomes into his own God of fire leading and leaving us gods in Valhalla and later returning to us with the next component of the ring cycle.

Speaking afterwards with another opera critic, James L. Paulk for Classical Voice North America, as we filed out- realizing that even after 2 and 1/2 hours of the most powerful singing any spectator has probably seen in years- The descent from the seats to the main lobby help highlight our return home, to which world tho, is up to the observer reader enjoyer and supporter to determine.

Wotan in a leather vest at room run, in a golden gown on opening night.

Leitmotif drinking game: Only for the gods?