“Move-In Ready” is Move In Ready at the Kresge Gallery 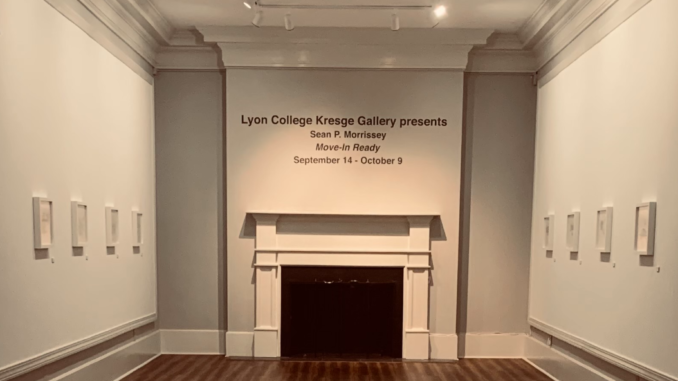 The Kresge Gallery’s newest exhibit opened on September 14th and runs until October 9th. “Move-In Ready” is a series of paintings created by Professor Sean P. Morrissey. Morrissey, a former University of Arkansas Associate Professor of Art, now teaches in Pennsylvania at the University of Pittsburgh. They gave a virtual artist’s talk on Thursday, September 22nd, and a reception followed. According to Dustyn Bork, Professor of Art and Kresge Gallery Director, Morrissey’s exhibit focuses on the question of “Is there still individualism in the concept of the Dream Home?”. Through a series of works, which they call “Piles,” Morrissey explores the expectation of where consumers would like to inhabit. Bork stated that Morrissey’s chosen works have a “lightness and air in it.”

If you have ever wondered how the Kresge exhibits come to be featured, Bork explained that a committee chooses the artists and their works. The committee at the beginning of the year sends out a nationwide call for artists. Often, the basis for choosing artists is their work’s connection to Lyon curriculum, as with the previous exhibit featured in the Kresge Gallery, “Close to Home” by Visiting Assistant Professor Abigail Smithson. Smithson’s exhibit closely mirrored the ideas she highlights in her special topics class this semester, “Sports and Art.” One exhibit will also feature the juror from the previous semester’s Juried Art Show, where students showcase their art. Later this semester, the Kresge Gallery will feature the work of the 2021 juror, Kellie Lehr, a visual artist from Fayetteville, AR. In the spring, Kresge will welcome back the 2022 juror, Brandy Green, a sculptor and potter, from the College of the Ozarks for an exhibit of her work. 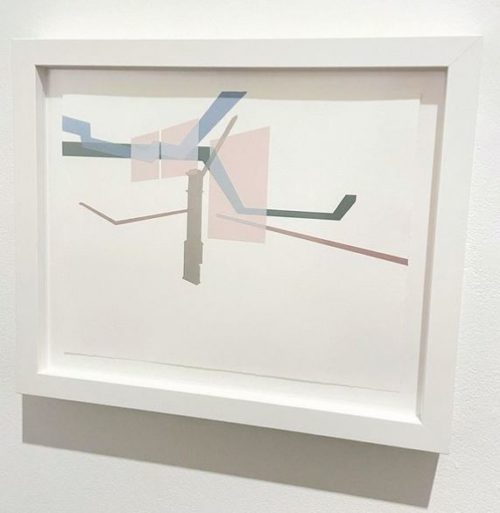 Cal McIntier is a junior art student at Lyon College. They felt that the message of “Move-In Ready” is an important one to spread, especially as a fellow non-binary artist. Cal stated, “It’s really interesting and gratifying to see a non-binary artist get the recognition they deserve, and it gives me hope for diversity in art.” Cal also stated that the exhibit fit into their studies here at Lyon due to their participation in the Architecture class, which Professor Bork taught last year. In the Architecture class, the students learned about an 1800s movement for architecture being more standardized. In Cal’s interpretation of the exhibit, Morrissey seems to be commenting on “the idea of mass production of domestic space. Cal was also lucky enough to help set up the exhibition in the Kresge Gallery and stated that the exhibit came packaged very neatly, with a plan, similar to a home’s blueprint, and all they really had to do was put the pieces up, “It really was move-in ready,” according to McIntier. Cal compares the idea of the perfect, dream home to a cookie-cutter lifestyle and the distaste for this life that Morrissey seems to be expressing in their work to the experience of being non-binary, which inherently means that you are breaking away from this cookie-cutter mold.

Caroline McCreight is a senior art student also from Lyon College. Caroline identifies as nonbinary and so they state it was a ‘delight’ to see another nonbinary artist’s work displayed. She commented, “With a decent number of our own LGBT+ students, I’m delighted to see this representation on Lyon’s campus. There is certainly no lack of genderqueer artists, but too often there is a lack of support and representation for these creators.” He also appreciated the puzzle-like aspects of “Move-In Ready,” meaning as you look at the exhibit, it at first glance looks disjointed, but as you look at the Piles you realize the coherent structure that reveals itself. Carol also commented on how the exhibit fits into their classwork at Lyon over the past four years. They shared that their classes on color theory and printmaking, both taught by Professor Bork, gave them a special perspective for this exhibition. Carol commented on the clean line work of Morrissey’s pieces which even further highlights the concept of finding peace within the chaos. In regards to Morrissey’s virtual artist talk, Carol commented that “Digital art is often overlooked or frowned upon in traditional studio spaces, so it was good to see someone so open about their use of digital programs and tools.” 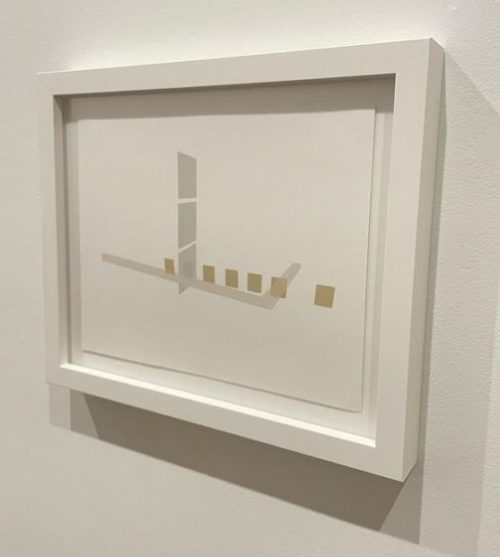 During Morrissey’s live virtual artist talk, the participants were able to take a deep dive into the stories behind their ‘Piles’ as Morrissey virtually walked the viewers through their exhibit. Morrissey explained to the group that the pile concept represents the “to and from” of a space and how one can find themself through other people’s design choices in custom home building. Morrissey found through their studies of home building that floor plans can act like a puzzle. Morrissey also gave the viewers an insight into their process of creating “Move-In Ready,” first they would take information in, primarily from Zillow and Realtor.com in the early days of the COVID-19 pandemic, and draw this information either online or physically and they would then pull the drawings into a software to then make those drawings into a print or painting. For “Move-In Ready,” Morrissey spent time trying to decide how they wanted the works to be displayed. Eventually, they landed on each of the pieces being the same size and in the same type of simple, white frame. This simplistic goal and the domestic feel of the space fit well into the Kresge Gallery with the primarily white walls, crown molding, and the fireplace. Crown molding and fireplaces are important design choices for Morrissey and their work.

The idea of the home became especially important at the beginning of the COVID-19 pandemic as the majority of people were now confined to their homes. Morrissey created many of their ‘early-pandemic’ works in their home as they worked through anxiety of the worldwide pandemic. Morrissey pulled many design concepts from websites like Zillow and Realtor.com during the start of the pandemic to relax and as a new way to do field research. Morrissey was also inspired to pick their color palette based on aspects of the world- especially, the paint counter, which they described as being like watching a reality show. The paint counter is a key player in many decisions that first-time or sixteenth-time home buyers, so it fits that Morrissey’s work around the idea of the dream home would take influence from the place of so many important color based decisions. Quarantine stir-craziness led Morrissey to experiment with a French, primarily printmaking process, but as a form of painting, called pochoir. With this new context, it was clear to the viewers of the exhibit after the talk just how complex and abstract the exhibit truly is. Viewers were able to appreciate the intricacies and stories that one can find in seemingly simple works. From installation to reception, it is clear that Sean Morrissey’s “Move-In Ready” truly is move-in ready. 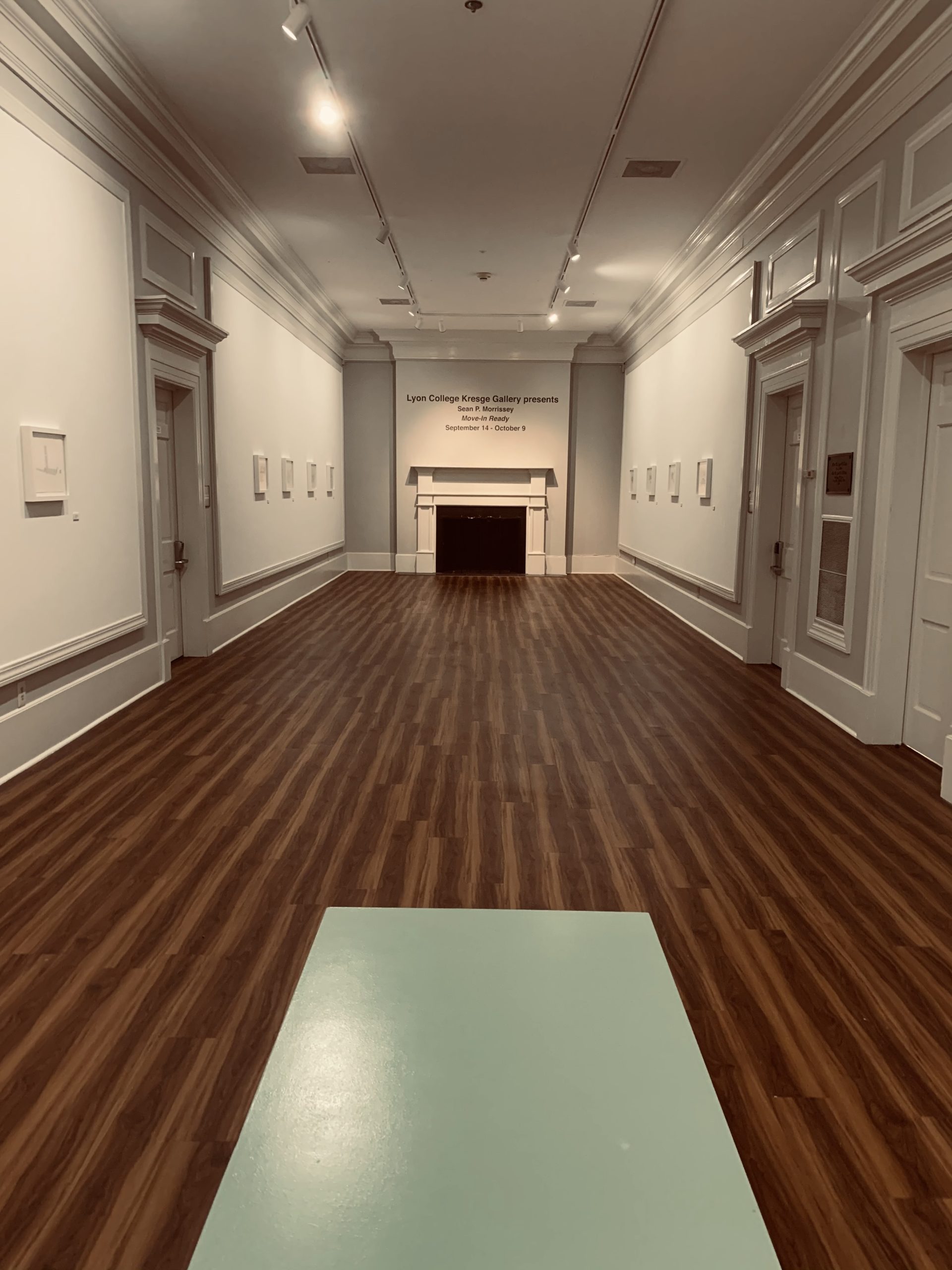