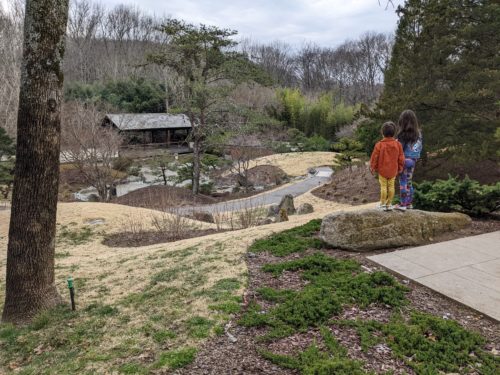 Sculpture, Sculptures Everywhere – not a snack bar in sight.

You might be forgiven for assuming a sculpture trail would have a snack bar: that, of all of their amenities, like their awesome learning programs for kids, that the Carell Family Sculpture Trail would have a spot for popcorn, nachos, pretzels or beer, or I don’t know, trail mix. 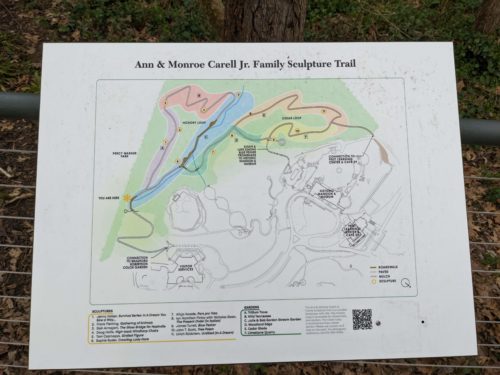 Cheekwood maintains one of the largest art collections in Middle Tennessee with quite a few of the treasures being on the outside – you know, away from the bathrooms, Cafe and busy-ness of the many active learning programs for kids.

While it’s not the easiest to get out to Cheekwood, now they’ve partnered with the public library to allow library card holders to check out admission tickets as part of the NPL’s Community Passport program (that also allows admission to the Country Music Hall of Fame and the National Museum of African American Music among others). But if you’re expecting that you’ll hit the trail with some nice treats you’re out of luck buster. It’s a nice stroll to the woods for kids and even nicer that it’s away from the rest of the kids there that are probably fooling around with its model train and frog pond at the other end of the 55 acre estate. Founded as a museum of Art and botanical garden in 1957, the 8000 plus artistic treats in the mansion and permanent collection often compliment excellently thematic rotating exhibitions of color, color schools, color theory, perception and their reception. For instance the present shows inside include Colorscapes -an immersive, site-specific installation by the Chicago collaborative Luftwerk- and Chroma, The exploration of color field painting. 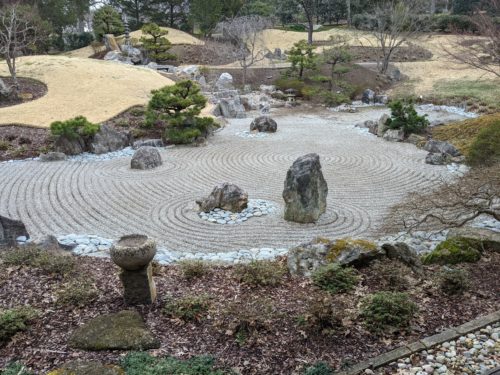 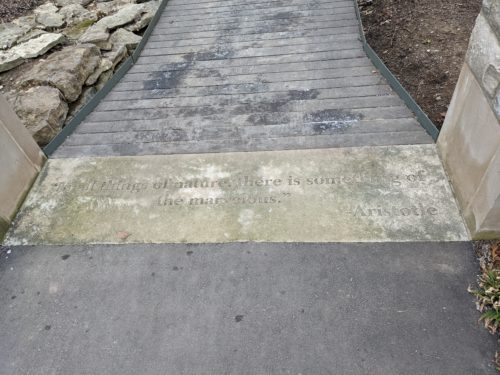 The woodland trail beckons, but so does a hot dog and a thirst-busting 44 oz. Too bad. Not out there. I mean you walk thru the Beer Garden to get there, with maybe a pleasantly uplifting stroll the Japanese Garden, so you might let your guard down thinking snack attack commences shortly. you see a future glory as general of the gutbomb delights while crossing the threshold: “In all things of nature there is something of the marvelous” by Aristotle- the philosophy degree holder in me inquiring for more. And he was smart so now you have just been made smarter by virtue of location. The die is cast. You hit the loop. And if you stay straight on the course you’re welcomed by the ass-end of a giant rabbit-person. Galvanized wire on a steel armature, crawling lady hair by Sophie Ryder was created on site in ’97. Being able to look at it from multiple perspectives that a long well crafted boardwalk brings you up to a bend of confusion at the bar and trunk of a chopped tree in the shape of the human form. The front-end of this tree-person, girdled figure by Tom Czarnopys leads us around to a nice little sitting area. 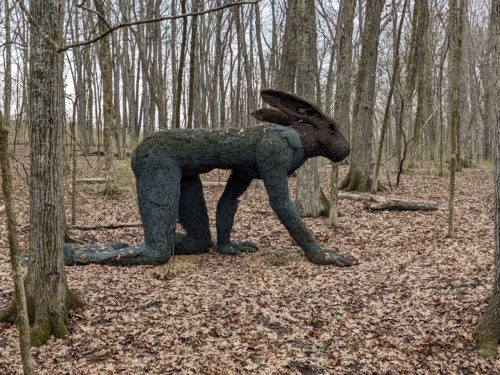 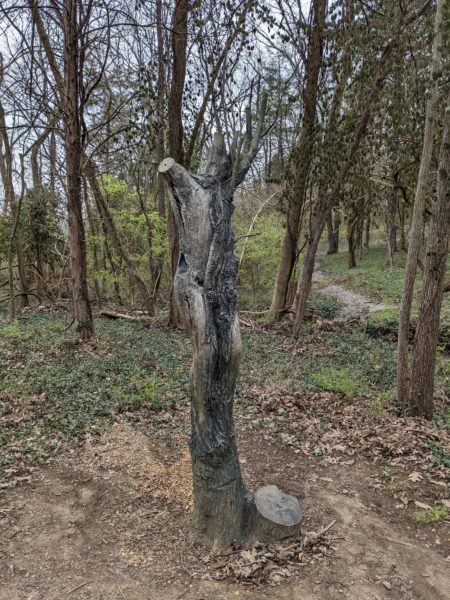 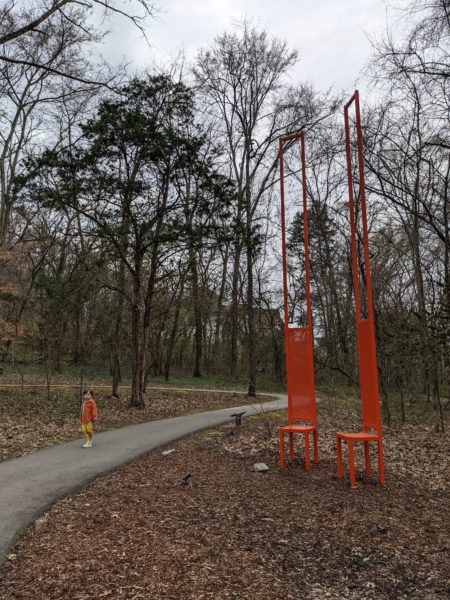 Except it’s not! Yeah – those two big-backed oversized steel chairs made of painted steel and piano wire are designed to function as wind harps- not a place to enjoy nachos or popcorn! High-back Windharp Chairs by Doug Hollis helps quench the intellectual thirst for new experience but does not put us any closer to making us the colonel of kernels. Snack attack deflected. Move along. 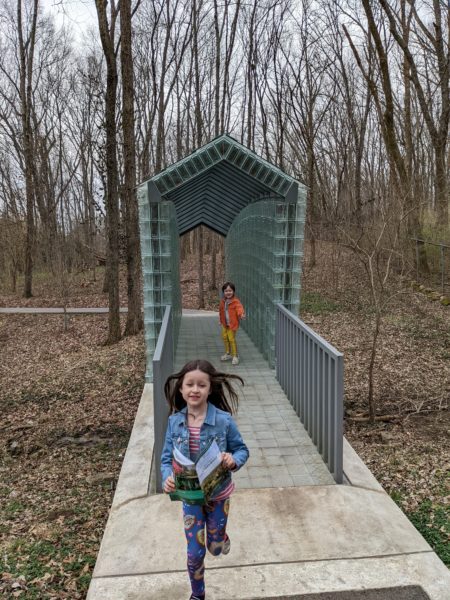 If that theme is not obvious they help you bridge the cognitive disconnect with a literal covered bridge of glass and steel the concrete foundation. The Glass Bridge for Nashville, made in 2003 by Siah Armajani, specifically for Cheekwood points both to the sculptural and the utilitarian being literally pedestrian. Your search for a kick ass wooded snack bar conquest continues.

Slow and steady wins the race so In contrast to Sophie Ryder’s hare we stumble upon Gathering of Animals by Frank Fleming featuring turtle frog two hairs and a hawk and built specifically for children in mind back in them woods. So now you’re just worn out- not a snack shed to satisfy the belly- except we find another sitting spot. 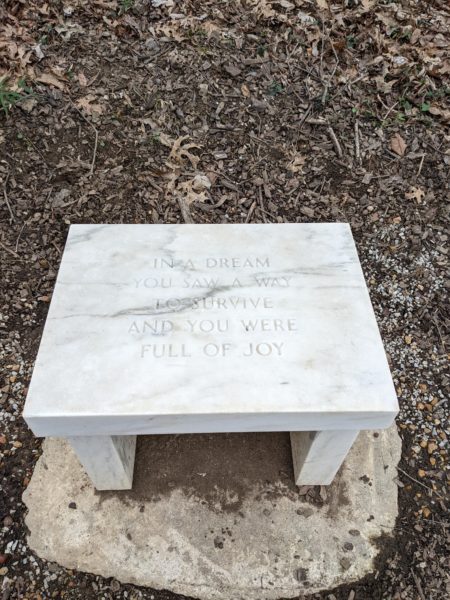 Or is it? “Survival series: in a dream you saw a way.. ” made by Jenny Holzer reminds us of the dream of a way to a snack bar. Sitting on her marble footstool only keeps us from the treasures that await. So we trek on. Twisting turning, like our tummies, growling, grinding, like stone. The next two installations only remind us of that. “Pars Pro Toto” by Alicja Kwade features seven polished stone spheres from rock found all around the world. A group of 10 etched stone squares, by Ian Hamilton Finlay with Nicholas Sloan, quotes the words of French revolutionary Louis Antoine Leon de Saint-Just in several different languages. Both stone works using the material to reference universal connection. The Stone not being edible we explore further… 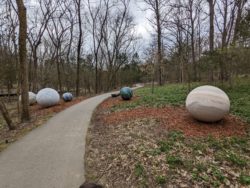 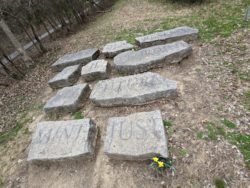 To find a small structure that emerges from the terrain. It calls to us further down the path as an opening, separate from the world but well immersed in it. The path turns from asphalt to rectangular stone recalling the previous sculpture but now purely functional guiding us to a wide and tall open doorway buried into the stone work summoning us. Snacks surely await. The large steel doors ajar revealing a deep long rectangular smooth walled concrete tunnel leading to a blue light within. 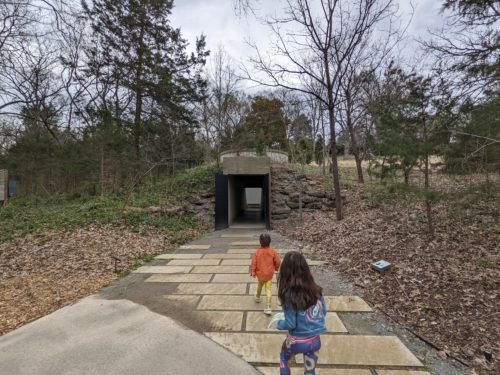 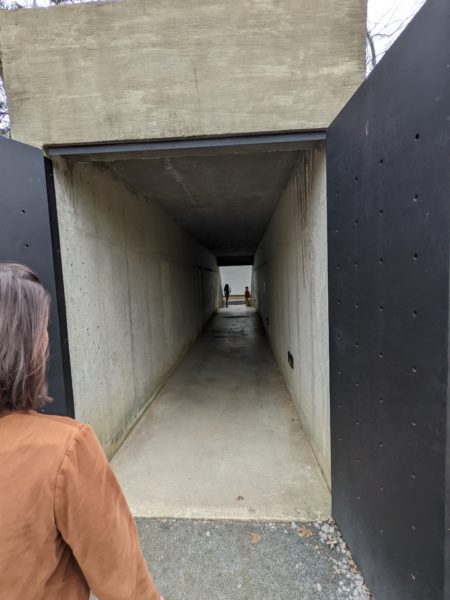 Walking into the light, a heaven of hellaciously salted heaps hollering out, we stride forward. The corridor calm, tidy, tight with any vocalization bouncing around and echoing into eternity, while the physical bodies of vocal emerging into a broad circular room, cornerless continuance of architectural endlessness. A giant empty snack hut: no nachos, popcorn, or beer. 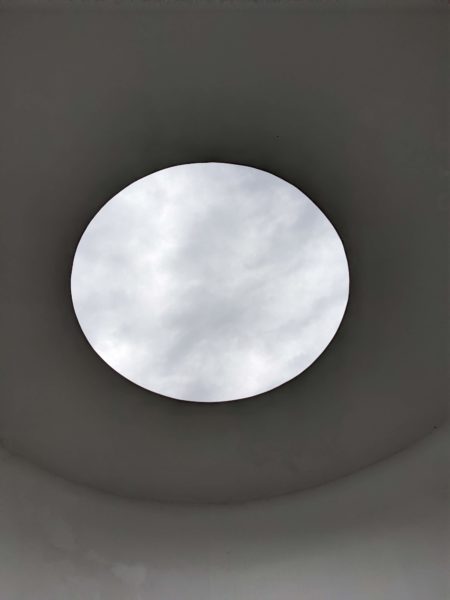 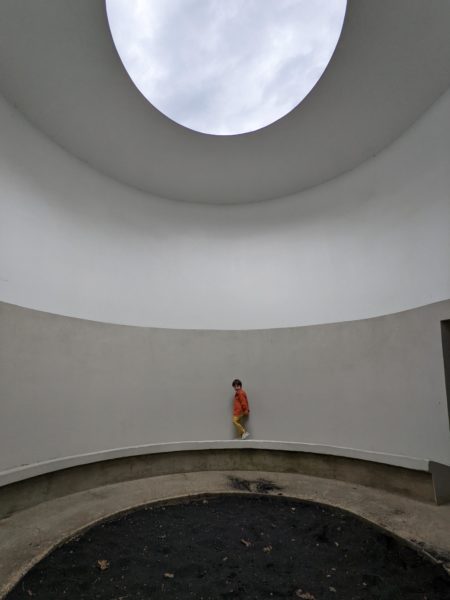 Nothing but an enormous circular bench ringing the edge of the round room and a hole to the sky above. No lighting except the world above, visible thru the circular ceiling aperture- The plainly painted room magnetically forcing your eyes to the clouds above in contemplation. Seemingly the sweet play by James Turrell in the “Blue Pesher” Is the tasteful delight forcing us to embrace the otherwise unseen daily mechanism of the sky above. This empty snack house unwraps the quotidian candy of this life. Its lack of snacks being the treat. A simpleness the barrenness inside this empty snack bar demonstrates our complex relationship with the intellectual flavor palette of the planet. Here we find ourselves. Here we find that the kingdom of snacks is within. Watching the passage of the wispy white lace of clouds calmly and quietly contrast with the yelling of children for the snack bar. In that secular room with no sound baffles The sound of a child screaming for snacks seems to go on forever. See, The child can’t enjoy the sweet snack of the world. Makes us ponder: What is required for anyone to see the world? At least in Turrell’s case it’s a completely empty distraction free room with a concentrated skyward gaze- a snack the child can’t unwrap yet.

Having experienced this delight we emerge from our concentric concentrated connection with the world back into the pure messiness of our wooded environs. Having had a sufficiency in the intellectual buffet from one of Turrell’s early Skyspaces that was made specifically for the site, we re-engage. The other closest Skyspaces only appear at Crystal Bridges in Northwest Arkansas or in Texas (Houston or Dallas) or Florida. Given the options, Cheekwood seems preferable in terms of making it home by dinner. 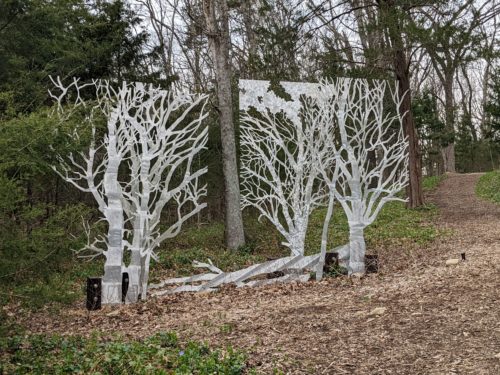 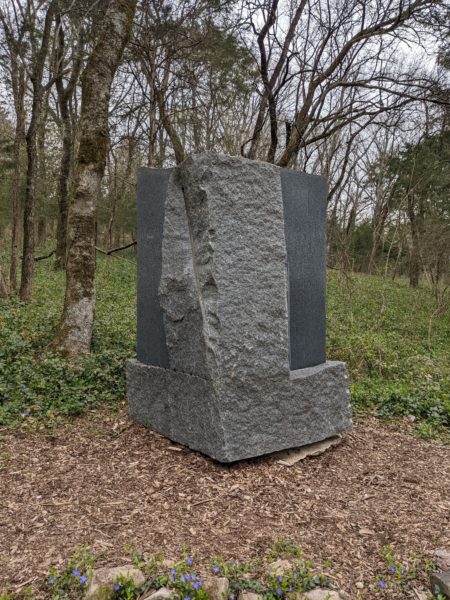 Coming out of the snackless snack bar, We enjoy a different connection to the world in the final two pieces on the Carell sculpture trail. “Tree Poem” by John T Scott features they flattened silhouette style layout of the neighboring trees created in aluminum and wood and a site specifically chosen by the sculptor to juxtapose his silver trees with their inspirations around them. While Turrell forced us to see the world around us and Scott imitated its forms in metal, Ulrich Ruckriem, in one of the final pieces on the trail, plays with the underlying material. Using a chunk of granite worked by human hands, the piece retains a weightiness in appearance- using a universal material in the form of a universal monolith. Similar to earlier stone work on the path indicating universal connection timelessness commemoration identification and immovability, it seems placed there by giants. As such it feels like a way finding device sending us further down the path past the site’s small limestone quarry and toward the final threshold that truly does lead to me site provided Cafe we have sought since the beginning. 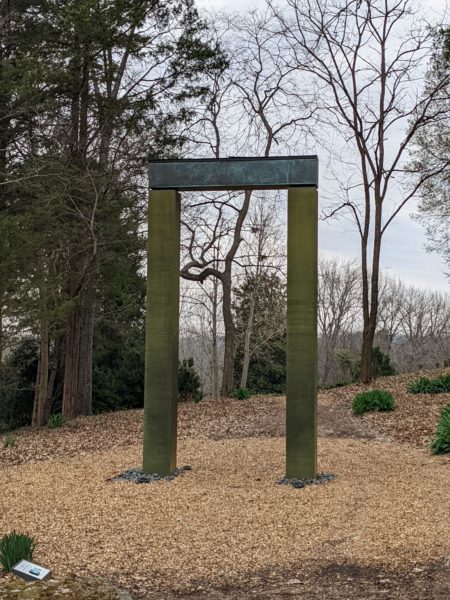 This final vital threshold, this open doorway, the final intellectual turnstile, formed from metal and mechanical components, breathes smoke on the traveler. The shaped metal recalls the texture of the previous stonework while the scale of the frame foreshadows the mansion ahead; the name “Cheekwood Prime Matter” by Eric Orr helps complete the self-referential context. From here, fellow traveler, your path heads to the waypoint of weary others- the snacks at the building cafe. But now, no longer seeking the victory of the sergeant of the snack attack, we skip the calling of the cafe and head straight to the eager childlike calls of the East Gardens, satiated with snacks for the soul.

Ask yourself dear reader, what is the deeper snack? and how do we prepare our soul for the eternal snackening?

Aristotle claims that plants have reproduction and growth in their vegetative soul – on display in the twists and turns here; animals’ souls add to that motion and sensation, like the hare and turtle; but humans? We have the rational soul, allowing for thought and reflection. As we walk the trail toward the end, snacking and contemplating, maybe we can prepare our souls for the final treats … or is it a snacking new beginning? 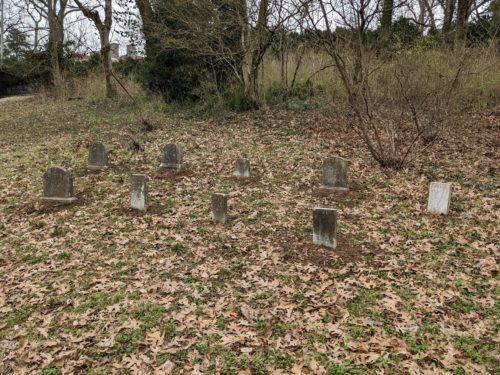