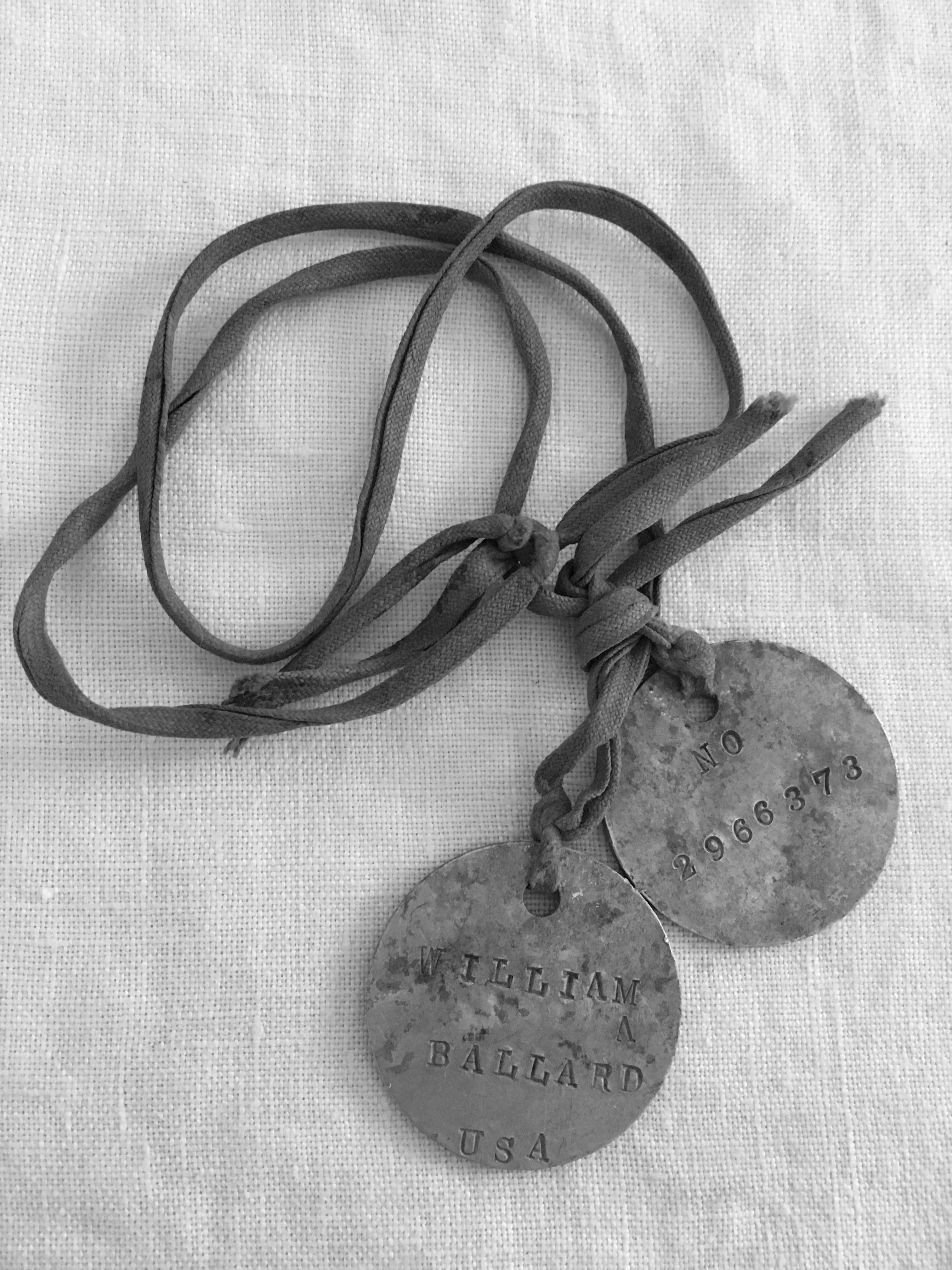 Treasure. In a back corner of a drawer of a desk that had come from my father’s parents’ house, there was a small cardboard box, gritty with dust from years of waiting idly, untouched. Inside the box were two military dog tags tied together on a stained, brown cord. The dull aluminum discs were stamped on one side with my grandfather’s name, William A. Ballard USA, and No 2966373 on the other.

The fact of finding the tags is not surprising. My grandparents, and after them, my parents, kept everything, so any nook in any part of their homes could spit up precious keepsakes or common junk at any time. Because of this, we know that my grandfather served in World War I, inducted on April 29, 1918, at age 25, was discharged in April, 1919, and fought in France. Having the artifacts he left, we know he was with the 92nd Infantry Division (Buffalo Soldiers), 351st Machine Gun Battalion, Company B.

At a genealogy workshop, I once talked with a man who was the keeper of his family’s old letters, pictures, books, artifacts, scribbled notes on scraps of paper – everything handed down until it is too old to be useful, yet too precious to throw away. “In the end, what can you do with all this,” the man said, spreading his arms wide to take in the enormity of the task. “It is a treasure, and it’s a burden.”

I remembered this as I uncovered my grandfather’s dog tags, his name and service number that identified him as a soldier in the U.S. Army. In the collection of important and useless ephemera that clutters our home, another treasure, a small key to unlock another door into our family’s past. Also, another burden.

Relic. One evening, burrowing into an old file cabinet in our mother’s basement, we uncovered a dusty accounting book, repurposed as a journal by our father’s father, who had begun writing what he called his “autobiography.”

He was a meticulous keeper of the tiniest details: “Began to write Nov. 1, 1944,” he penciled in the margin at the top of the first page. His handwriting, in blue ink, was slow and careful, a teacher’s penmanship. After the war, he had become a teacher, and later the principal of the city’s Colored school, as well as a lifelong student. Tuskegee University in Alabama, Philander-Smith College in Little Rock, and Voorhees College in Denmark, S.C., all claim him as an alumnus, and his interests were wide-ranging: language, music, religion, carpentry, farming.

It was here in this fragile journal that we learned why, in a devoutly religious family of Pentecostals and Methodist Episcopals, he dared to convert to the Roman Catholic faith.

“When I was in service overseas,” the story of his conversion begins. During training in Fresnes, France, he and another soldier, a theology student from Pittsburgh, organized a Sunday school that met every week. They would also visit the Catholic church in town: “Even though we knew nothing of the Catholic faith, there seemed to be something about their church services that had some favorable impression upon a visitor.”

Back home, he volunteered to teach Sunday school, but was restless in his spiritual life: “I always felt that I was not satisfied in my religious belief. I thought that I could not exactly agree with all the things I had been taught…. For some reason I felt inspired to investigate the teachings of the Catholic Church after I had become non-denominational. The teachings of the church appealed to me more than any other faith I had heard before then.”

In September, 1936, my grandfather received the sacraments of baptism and penance. His eleven-year-old son Bernard, who would grow up to be my father, was baptized the same day.

The Catholic Church venerates the relics of saints. The saint’s power, the Church believes, is in every part of the body and in objects that had been in contact with it. The dog tags that now rest in the sunlight on my desk, each about the size of a communion wafer, hold a complex but diminished power. My grandfather wore them near his heart into a church in France, where a spiritual spark flashed. Years later, he passed the flame to his young son, who later shared it with his daughter-in-law, and later still, two granddaughters who, in time, abandoned it to follow their own spiritual paths.

Keepsake. Along with the dog tags, the small, dusty box held two well-worn French dix centimes — coins with an image of Napoleon III, one struck in 1856 and the other so worn that the date is unreadable. The cool bronze discs are dark with age and, I imagine, with the years of being rubbed between my grandfather’s thumb and forefinger, a fidget tool in the pocket of his suit pants.

What purpose did these coins serve after the soldier returned from the World War? Did he track the circle in his pocket with his thumb during idle moments, or to focus his thoughts, or calm nervous energy? Did he clutch them in his pocket while he and his bride Alberta waited to say their vows? Did he drop them into his pocket each morning as he dressed for work, and return them to the top of the chest in his bedroom each night?

The treasure my grandfather left us also contains the steel helmet that deflected shrapnel from a young soldier’s brain and the grotesque mask that kept mustard gas from reaching his lungs, the heavy reminders that life can be blown away at any moment. The coins carried in a pocket, or the dog tags pushed into the corner of a desk drawer, were an easier weight to bear.

Pulse. I pick up the dog tags and close my eyes, and they come to life in my hand. They are damp with sweat. The trench is dark, and I smell dirt and gunpowder and fear. The dog tags on their cord tremble, stick to my skin and beat to my heart’s racing pulse. The guns thunder in my ears, and above that, the shouts of soldiers to my left and right.

My grandfather wrote in his journal: “We went to the Argonne Forest in October, hiking all the way. We took a position, on the alert, ready to go into action. While we were waiting here, we sighted a German sniper, but he got away. …About eleven o’clock after we had lain down, it seemed that everything began exploding; the allies had laid a heavy artillery barrage on the Germans.

“When day light came, we advanced, taking a position where we found was a very busy place dodging bullets. Our lieutenant told us there were supposed to be some German machine gun nests just ahead, so by this time we were very anxious to take them, but we were not allowed until orders came.

“That afternoon, late, we started our advance, but the Germans directed an artillery barrage on us, so we had to take cover in a muddy trench until this ceased. When we did start the enemy going, they retreated, but there were some moments that they would offer so much resistance that I would have to wonder which minute might be my last.”

The aluminum tags on their ancient sweat-stained cord clack together when I put them back on the table, and the room is quiet.

Taps. We gathered at my grandfather’s open gravesite on a bright fall day in 1964 and grew quiet as veterans from the local American Legion post lifted the flag from the casket. I covered my young ears as the three volleys were fired. A bugler blew “Taps,” and the flag was folded into a tidy triangle and laid gently in my father’s hands.

In the decades that followed, I have gotten to know my grandfather through the letters, books, pictures, household goods, receipts, his own life story – the burden that he carried, and then left for us to find. He haunts us. When we found the journal in which he’d begun to tell what he knew of his family’s history, it was 50 years, almost to the day, after he began writing.

I pick up the dog tags that my grandfather wore a hundred years ago and begin to ask the terrible what-ifs: What if the German sniper had done his job, and found his mark on Cpl. Ballard’s chest? What if the machine-gun rounds had laid him down in that muddy trench in the Argonne Forest? What if he had not returned, full of life and hope, and married Alberta Sanders, who gave birth to Bernard Ballard who grew up to marry Hazel Blaine, who gave birth to me? What if a simple aluminum disc, bearing his name and service number, had been all that returned to the States a hundred years ago?

The dog tags on their sweat-stained cord pulse in the palm of my hand. I hold them against my chest and feel the beating heart that is still there.