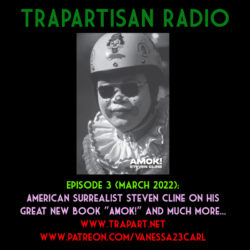 The recent third episode of Trapartisan Radio featured an interview with Atlanta-based artist Steven Cline. The show is hosted by fiction and occult author, artist and filmmaker, Carl Abrahamsson whose Trapart publishing project just released Cline’s title, Amok!. The book is most easily described as a collection of surrealist essays on subjects ranging from a celebration of the celluloid jubilee of a Busby Berkley dance sequence to a summertime subterranean encounter with a Santa from space. It’s more complicated, but more accurate, to call this a book of poetry. The text comments on the Minneapolis riots in 2020, and the structure and function of important bodily organs, but Cline’s commentary constitutes a new creative artwork unto itself.

Cline and his wife Hazel are veterans of the Atlanta Surrealist Group, and Cline’s website features loads of gorgeous, visionary collages. Most of the writings in this new book were collected from Cline’s zine publications and blog posts. In the interview, Cline explains that his Amok! title evokes “The creative side of destruction. Internally and externally.” There’s an intense, polemic tone to some of these pieces, but the whole book is also shot-through with zany humor, and packed with punchlines and zingers.

The trickster quality of Cline’s writing is the sugar that helps some of the more heady medicine go down, and when he’s hitting on all cylinders Amok! reads like a counterculture conversation channeling Robert Anton Wilson, William Burroughs, Emma Goldman, Terence McKenna, Guy Debord, and Antonin Artaud all at once. In the middle of the podcast interview,  there’s an important exchange:

Abrahamsson: “In a world as surreal as ours, is there any need for ‘surrealism’ as such?”

Cline: “This world we live in now, I’d say it’s more absurd. Surrealism is more a connection with the unconscious and kind of this deeper well that’s lacking in this current society.”

Cline makes an important distinction between surrealism and contemporary cultural absurdity here. And Amok! is a hopeful book, ringing with poetic anarchy at this time, in this America, where dead Mickey Mouse waits dreaming.