The exhibition currently on view at the Germantown Performing Arts Center is a collaboration between composer/musician Anna Clyne and 26 Houston high school Advanced Placement and Art IV visual arts students. The works are based on Clyne’s written text, snippets of music from her website and the student /teacher discussions held in class and reference Clyne’s most recent composition entitled, Prince of Clouds. Clyne states on her website that while composing the piece she “was contemplating the presence of musical linage – a family-tree of sorts that passes from generation to generation.” 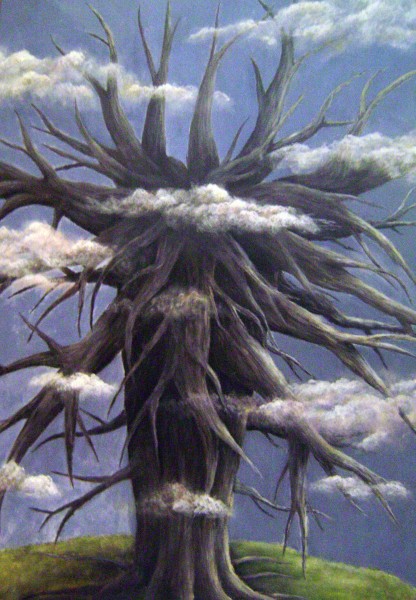 Working under the direction of arts instructors Amanda McKnight and Bobby Spillman, students created paintings and sculptures based on their impressions of Clyne’s written thoughts and previous compositions. The works in the show range from a black & white ink drawing of a nest of hornets to a layered cloak-like garment to a ribbon painted violin. All demonstrate great imagination in giving a visual interpretation to creative musical thoughts.

Several students were nervous that Anna Clyne would not find the works relevant  to her composition, but according to Amanda McKnight, the students “hit the mark” with their creative efforts. During the November 3, 2012 premiere performance of Prince of Clouds with the IRIS Orchestra at the Germantown Performing Arts Center the students realized that the contemporary composition contained a relationship between music and canvas and that colors, textures, harmonies and rhythmic gestures can be present in both art and music.

The composer, who also makes paintings and collages, was one of the three judges selecting the winning works. Also judging was conductor Michael Stern and David DePeters, percussionist. AP student Elizabeth Riffle won first place with her acrylic on canvas painting entitled, The Elder Tree. The work is a multi-canvas piece that echoes the shattered sounds of the composition. Second place was awarded to Lauren Flynn’s acrylic painting on canvas, The Soloist and third place went to Kayley Hall’s, Ascend into Light also in acrylic. The works, which were previewed at the Germantown Methodist Hospital Gallery in October, each include a statement by the artist and are on view at GPAC through November 15, 2012.

Mary K. VanGieson is an artist, educator and sometime writer serving on the board of Number: Inc.