On this April fool’s Day, the story of il buffone Rigoletto calls out the despair of the sad clown. Trying to hide his daughter away from the world only worked for so long, and a studio visit to the Noah Liff Opera Center helped highlight the inescapability of what is written… as it was by Verdi in the mid-1800s so was it performed beautifully diligently in the rehearsal hall upstairs.

If you had been there you would have showed up a little before the 7:00 call time in order to meet the pleasantly ebullient Cara by the front door. Rushing up the stairs because traffic had already clowned you, you get to pull up a chair by the magnificently brilliant artistic director John Hoomes, who explains that although Pavarotti played the Duke the clown gets the titular rebuke! 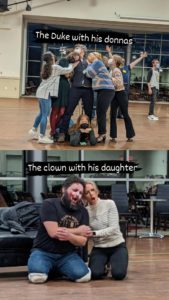 The rehearsal hall is a large room with paneled walls open, house lights on, and cast facing a stripped down stage decoration laid out with gaff tape to emulate the TPAC stage. No video or audio please since that’s the treasured tesoro – the reason for the foolish season. Chorus remains masked except principals, incl especially those who traveled to Mantua by way of Nashville. Here’s the deal, John explains: even at TPAC they’re not mic’d. And in the rehearsal hall you are roughly 20 feet away. Ears delighting in the proximity, the brain gets to process the intimacy. And intimate it was! See the Duke is quite the Playboy and his jester Rigoletto performs the celebratory wingman role well- Maybe too well for the casted crowd. When he belittles a wheelchaired old man at the first festa, Rigoletto gets an earful and a cursed maledizione that will haunt the pitiful fool until the final scene and in deed the final word. 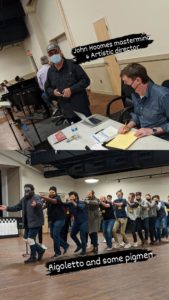 In this particular performance designed by John Hoomes, Verdi’s timeless tale is merged with a Noir aesthetic that includes a multimedia presentation of short films projected over the dejected desperate despondence of the fool. The result of a collaboration between the Nashville Opera and the Nashville Film Festival helped create the original film noir by Penumbra Entertainment, winner of the Nashville Opera Noir Filmfest. That collab invited some of Tennessee’s most innovative filmmakers to create short black-and-white films inspired by John Hoomes’ new noir staging. We see gunplay in place of swordplay and a nasty final ballroom stabbing of an innocent paying for her father’s sins. Venti scudi will get a man killed but it’ll also get the resolution of another man’s curse. Pig-faced partiers help to deceive the sad clown while the Duke of Mantua celebrates the fickleness of his female conquest. While the Duke is decked out in a motorcycle leather jacket and a couple shoulder holsters. ‘La Donna e Mobile’ gets a totally different vibe and it’s darkly enthralling. Ears ringing, guns slinging, bejeweled masks blinging, the buffoon’s life goes from worst to burst when his daughter’s soul floats away like a feather in the wind in sad apologia- and the Duke plays on. 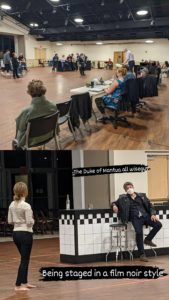 But these players know the score. As John Hoomes describes it, Rigoletto remains one of the top 10 operas performed today. While there is a disconcerting amount of 3/4 time in jubilation the sadness of the story is timeless. In this mutation of accent and thoughtful staging, the singers know what to sing but now they get to be the darkness in noir.