The Medium on the small stage

Summoning spirits can be spooky business. Halloween weekend, the Nashville Opera did it inside their own digs at the Noah Liff Opera Center in the main rehearsal hall upstairs. The compact stage faced the back wall so coming into the space was like coming in from the green room in a welcoming and comfortable fashion. The space made for an intimate setting with the actors performing on a small stage mere feet away belting out the tunes from “The Medium,” a mid century Broadway Opera that provided some memorable tunes, pleasant songs, with the crowd sharing tables, like the cast did onstage. Drinking a beer coming straight from the airport I got to meet fellow patrons in the stylings of a businessman with his awkward jockish high school son- two people otherwise I never would have met but here we were taking in a murder mystery over some nice libations, not unlike the characters on stage sharing a small table. 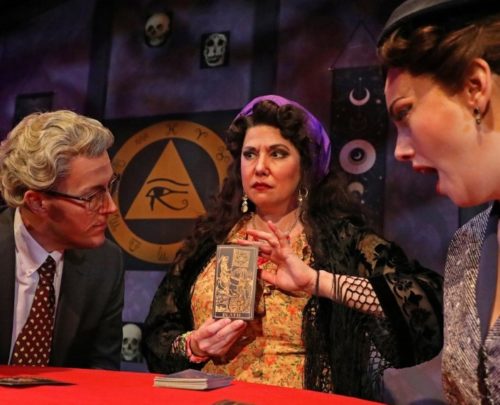 Although The Medium is really a two act, the compact storytelling matched by the close quarters, tight stage design, and small instrument ensemble, it has the feel of a long one-act. This setting of the piece by local genius, CEO & artistic director John Hoomes, keeps the story in two parts, allowing for an intermission to refill, re-acquaint, and refresh the mental palette with the fun lobby arrangements and opera host-employees in costume.  Focusing in from context to set design, the fun single location set was the home office seance setting of Madame Flora, a grifter who summons the dead voices for desperate family members of dead people. We can clearly see how the tricks in play in a two-layer exposition at the beginning where the mute son, Toby, of the good Madame shows how they work. As the audience we see the strings and through that become part of the con in a fun way, almost feeling both sad for the marks, the parents Gobineau of a dead infant son, and a Mrs. Nolan, mother of a dad daughter. Madame Flora usually calls the shot with her assistant Monica and her son Toby, but when she doesn’t, shit gets real. Was it Monica, who usually does the voices offstage, filling the room with the voices of the dead? Was it Toby who touched her during one of the communications with the deceased? Or… the dead who have finally had enough and confront the con artist? We actually don’t know and neither does Madame Flora. As she tries to drink her confusion away, I’m reaching a buzz on my second beer and along for the ride.

This piece was developed in the mid 20th century by Gian Carlo Menotti, who believe it or not, was writing Operas for Broadway and even TV, so he wasn’t in the serious crowd doing the dissonant music thing. This piece definitely has that theater vibe on a simple set in a simple setting, it’s welcoming to the non-initiated and accessible for dunces like me, who want to enjoy the world for its own sake and beauty. The voice fill the small room, and set anywhere else the performance might have seemed small. It fit well and got me wondering about this Menotti dude.

John Hoomes describes his defense of the playwright/composer like so in the program notes:

“Many years ago, I was on a discussion panel that was moderated by what I can best describe as an earnest, yet self-important, opera snob. We were there to discuss 20th-century theater works with a focus on opera written between 1930 and 1970. When Menotti’s name came up, our moderator turned to me and asked, “John, why do you think the works of a minor composer such as Menotti are still being performed today?”

And I had to reply, much to his horror, “Because Gian Carlo Menotti writes intense music-theater pieces with compelling, emotional stories filled with unapologetic lyrical beauty. And, unlike so many contemporary opera composers, who often write works that sound like someone dropped a tray of silverware down a metal staircase, audiences love and enjoy Menotti’s works. Just because something is popular does not mean it’s bad or that Menotti is a lesser composer.”

He did not call on me again.”

Being comfortable with noise and the improvised music traditions, the pleasant melodic soundings of the menotti piece were a welcome contrast to the discord to the onstage scripting. As Hoomes say, “Menotti plays with this ambiguity, adding layer upon layer, building the tension until he brings the opera to a shattering climax.” That climax is the confrontation between the grifting Madame and the ‘ghost’ whom she shoots. Out stumbles the mute Toby, covered in his own blood. The contrast between the melodic musical foundation and the dramatic performance also reaches a climax in that the most compelling performance of this opera was delivered by a dude with no lines. Drenched in blood, barefeet, whipped like a borrowed mule, Toby (played by a young Joseph Mobley) closed the gap on the grift. Him falling out of the trick closet to join the dead children they had often imitated brings a bizarre closure: Madame Flora joining the bereaved and be-grieving parents herself, the list of characters onstage becoming even smaller than the musical talent hidden in the shadows. The audience at the room tables offstage matches the audience at the table onstage in horror in that Halloween tradition. That old time religion selling well. Packed house, packed mind, packing us in nicely, still wondering. 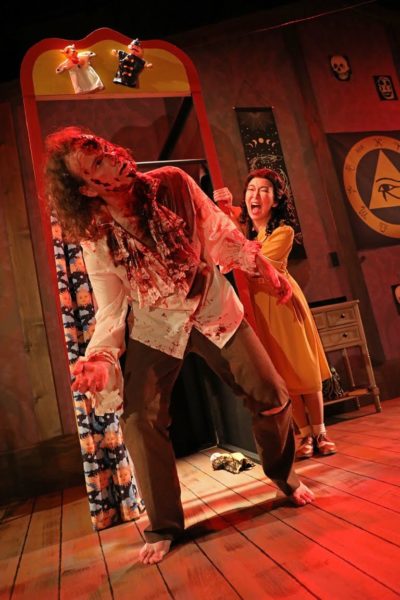 Finding out that Menotti for years was partners with Samuel Barber might help explain similar sentimental reactions and emotional pulls. Finding out he started his own opera festivals to help spread the sung word helped explain the context of an appeal to accessibility and hearing the words sung in English didnt hurt. His rejection of the en vogue atonality of the mid-century included his continuation of the verismo tradition which called out notes of continuation from Puccinni (Madame Butterfly and La Boheme among many others) and Leoncavallo (the great and celebrated Pagliacci, highlighting the crying clowns). This biographical and literary context helps explain how the natural intimacy that staging it small helped convey. As the audience, we felt onstage, part of the action. As an opera outsider, I felt inside. 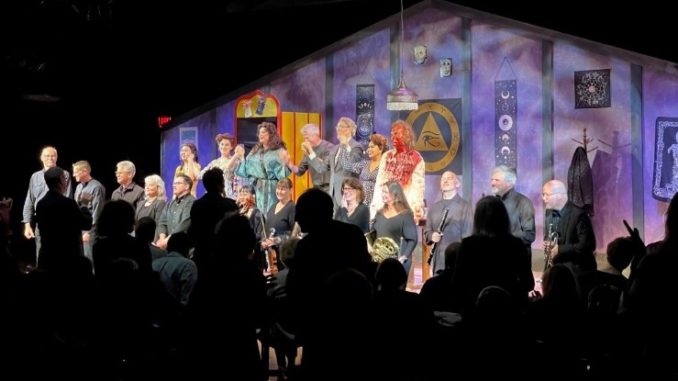