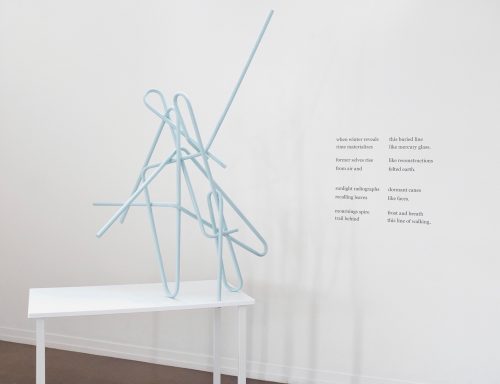 Tom Lee: Yeah. Things you can ignore when you’re working in the studio, coming up with ideas…

Ideas come from everywhere, right? Maybe researching and thinking about different kinds of spaces guide you. Maybe materials or processes lead one into research — unknown spaces that somehow are related to narratives or symbols, architecture or math or whatever you are interested in, right?

Yeah, I think it’s better to be curious than anything. Then your curiosity makes all the uninteresting parts about researching worth it because you find stuff and you go, “Oh yeah, that’s cool. I didn’t know that.” Well it makes sense on the whole public face, anyway. The art is on the inside and all that interest is what comes out of your mouth so that people think that you know something.

I mentioned before how great it was when you were at MCA, the group of people, especially that last semester with you and Rob (Hart) and Jim (Wines) just doing all sorts of things.

There was a lot that was research-based, but it was on this personal level, a life history I think that you were interested in, too. That had a good effect on the way that I think about things. Not just art-making in school, but on a personal level, too, the kind of possibilities.

During that time there was so much escapism that was taking place because no one really… you know it’s hard to realize how rich and valuable that time was. Then there was that whole period of the sort of vernacular art of the ’80s that you related to, you know?

Exactly. Well it also, but that was in the ’80s, you know? There was this sort of stamping that had to happen around a new regionalism, right? 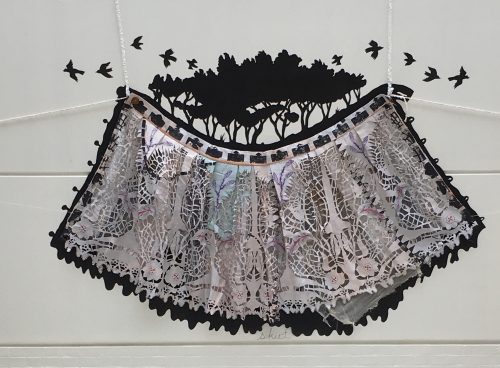 There was this kind of southern vernacular that was learned and self-aware but was also resistant to academia or academic training. Whereas I think the ’90s was a totally different time. It was definitely resisting similar things but was also probably embracing… what you would call low-brow or kitsch or unintellectual spaces; looking at the madness of location or a kind of desperate sadness that was in it.

Academically-speaking you had a… which happens all the time, you had a group of

teachers that were learned in a particular way during a particular period of time. Then you have a new group of students that are learning from them, but resisting so much of how their teachers think… you know what I mean?

An important thing that we had in common as student and teacher was that we were makers, right? We were both very interested in tools and using materials. If it was raw, noisy, and ugly, there was still a kind of thoughtfulness to it, right?

How do your undergrad and graduate school experiences compare?

I’ll tell you the positives and negatives of undergraduate. Positives were that I had access to a phenomenal building space, tools, studio, all the things that, in my mind, where what it meant to be an artist. As a graduate, I had to experience things that I wanted to be able to access. One was, that I would have the space and the teachers there that would provide the knowledge for me to be a builder and a maker and give me that tool set. I wanted to be in a place where there was a ton of cultural things happening around art.. Ultimately, in the ’90s, the endgame for me would have been Chicago or New York. From where I was living, those were really the kind of cities that I wanted access to.

So that’s one of the reasons why I went on mobility and went to the New York Studio Residency Program, was because I was really longing for that experience. What I was longing for was to be a part of that art world and ideas and the culture of art. It was interesting, there seemed to be a little bit of a resistance about me going or being there. That gave me a sense of a side of my teachers that I hadn’t really seen. I was really perplexed by that.

I saw that. Not just in your situation but a similar reaction with other teachers at the school.

But being a teacher and knowing also that schools are programmatic, they’re designed to come up with a pedagogy or a philosophy. I think MCA had a very clear goal with their students that came out of an American Arts and Crafts movement history. As I became more aware of the pedagogy that I was being trained in, I also learned that it could only be as useful up to a certain point. Then I just had to accept the fact that I loved the school, I loved the people but I learned I had to pass them the knowledge but I just had to learn another way to think. I didn’t have as much conversation with people there from that point on.

It sounds pretty accurate. So when you finally went to grad school then, was it a real different experience from that?

Yeah. The graduate program that I went to is heavily conceptual and heavily political. So, I would say, the reason I wanted to go to Vermont College of Fine Arts, there was two reasons, one of course, being a father. Secondly, I had already been working professionally in the arts for a really long time. I needed a degree but I was also able to teach … Frankly, I was able to teach, fortunately, without a limit for a long time because of what they would claim to be my-

Exactly. I had been involved in exhibitions. I work with museums for a long time and all this other stuff. I was able to squeeze my way into teaching for quite a while but an opportunity came up. I was really interested in the college of fine art’s pedagogy. That was going to be a truly critical philosophy, activist, social activist-based program that was going to have a lot of political underpinnings and that … And a better reader and thinker and that was what I was most interested in.

It was a really difficult program. That’s where I felt that I grew the most and I tried to access the people that I did my visual culture research with. That’s where I really tried to step up and work with some really tough people, really … That were either published or really good thinkers or good in writing as well. That was a big thing for me. I always felt like I needed to become better at that.

When I went to Bozeman (Montana State University), I didn’t really know anything about it except it wasn’t Mississippi. I welcomed a different kind of schooling and living in a very different culture. I didn’t know that anyone was there connected to the art world, really, and discovered there were really well known artists with connections to East Coast, Chicago, and West Coast art culture. In a lot of ways, the undergraduate experience there was a lot more meaningful and formative.

After the Bozeman experience, I decided that I might not know what I’m doing but I felt this real freedom for thinking about the art world and my own training in the art world in a totally different way.

Yeah. So, then you went to grad school…

I was coming back into a culture that I didn’t like. The work I started making came from my own experiences but it spoke to the “southern culture.”

So, there was the work you were making in grad school then that was the critique of southern …

Well, a critique of southern religion for a bit there. It was pretty direct.

Now, I’m trying to do one thing and that is to create meaning that I can have confidence about. That meaning for me is apparent through the way I alter materials or transform materials from their original utilitarian meaning into some other narrative or personal meaning.