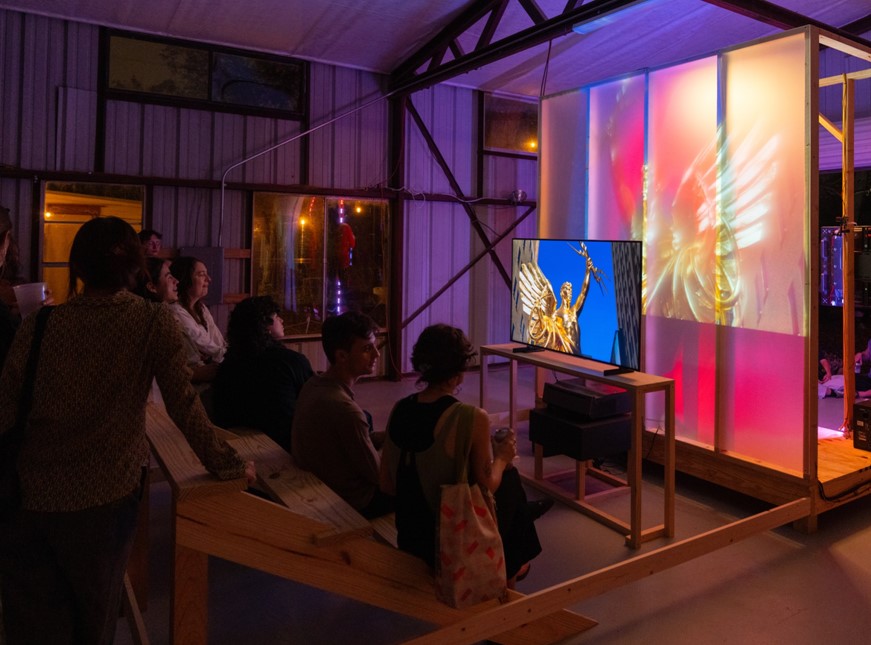 Trey Burns, Taylor Shields, and Emily Lee at All the Sudden

by Macaella Gray and Zoe Roden

On December 10th, Sky, Lake, Glow, Thunder, Air, Water, Mountain, and Ground opened at All the Sudden, a DIY space in Austin, Texas. Curated by Emily Lee, this exhibition centers a sculpture by artist and co-founder of Sweet Pass Sculpture Park, Trey Burns. The sculpture will be “activated” and reiterated by various artists, poets, musicians, and neighbors across the span of the show.

Set in the center of the All the Sudden warehouse, Burns’ sculpture is a wooden two-way platform bisected by frosted acrylic plexiglass. On one side of the divide is a raised stage, two monitors, and a podium-esque colonnade; on the other, small wooden bleachers are oriented to face another small monitor. As footage captured by Burns of the Texas Blackland Prairie rolls across both monitors, images from the same reel are projected on the dividing plexiglass. Architectures of the theater, stadium, and cinema are formally invoked by the installation. Though an amalgam of these forms, the sculpture resists naming as much as it denies any prescribed way of seeing.

Between the hours of 6 pm and 9 pm on December 10th, All the Sudden was filled with people listening. Some leaned against walls or sat on the ground, while others closed their eyes, concentrating on the prophetic words of Taylor Shields. Reading from the ancient Chinese divination text I Ching, or the “Book of Changes,” Shields was the first performer to animate the space. The name of the exhibition—Sky, Lake, Glow, Thunder, Air, Water, Mountain, and Ground—comes from the eight basic principles of I Ching, which when combined and recombined, makes for the whole of I Ching. Standing on (in) Burns’ sculpture, Shields began every reading by asking the audience to think of a question with specificity and intent; she would then roll dice and answer with the Book of Changes. Arriving at the number 10, she read: “treading on the tiger’s tail… Just who we really are can be some of who we think we are. The heavens give us some room to play around with this.” That the number 10 was rolled was certainly driven by chance, but that we found solace and truth in the roll might be influenced by what the Surrealists called “objective chance.”

For the Surrealists, objective chance is the “active synthesis of the subjective and objective,” the external and the internal, or the unconscious and reality. It is the projection of one’s self onto the objective world so as to choreograph reality toward the fulfillment of our deep desires, hopes, and fantasies. An experience of Shield’s performance functions similarly, as one is given a reading guided by “randomness” but whose meaning is ultimately determined by us (the viewer, the listener, the projector). As if the material world lives in harmony with our internal landscapes, the answer we desire combines with what we hear during the performance. Shields reflected the interior thoughts, desires, worries, and memories of her audience back onto them, almost like a mirror.

Burns’ sculpture is another experiment in the projection of the inner onto the outer, though this time the two live in distinct disharmony. As footage from the Texas Blackland Prairie plays throughout the space, the viewer is reminded of the extent of urban planning and demolition projects in North Texas. The Texas Blackland Prairie is an ecoregion encompassing the Dallas-Fort Worth area and Austin under enormous threat. Although the landscape has been transformed by human interference and much native vegetation has disappeared, the ecoregion retains its name left over by ghostly prairie ecologies. Tall grass prairies are of the most endangered biomes in the world, farmed and exploited for their rich soil. Less than 1% of native Texas Blackland Prairie vegetation remains today, living mostly on parcels of land squeezed between urban development and farming projects. In Burns’ footage, we see natural forces resisting extinction—sunflowers making space in suburbia, or vegetation finding home in construction zones—however the configuration of the Texas Blackland Prairie as constructed by Burns certainly does not look like what its naming indicates it should. The dissonance between landscapes past and present is sewn together by language and image, showing us a Texas Blackland Prairie where indiangrass, eastern gammagrass, and big bluestem have been replaced with lawns, concrete stretches, and tilling.

Nature has often been likened to the mirror by Romantics and psychoanalysts alike. As Lee tells us in her exhibition text for the show, “in [nature] we see ourselves, or what constellation of memories and associations make up the self.” Presenting distorted images that resist idyllic associations so often assigned to the “prairie,” Burns’ sculpture proves sensitive to this complicated history of romanticism. He asks what it means to continue to identify with a landscape that is soon to be (if it is not already) unrecognizable. If Shields’ performance leads her audience to the answers they seek—yet is not covert about where and in what form meaning is made—Burns’ sculpture creates tension between our internal projections and the landscapes we cast them onto. The footage raises questions about where our imagination ends and reality begins, till we realize they are not so distant from one another. All of this taking place in a room literally organized by doubles—doubled spaces, doubled images, and doubled orientations—-is certainly no accident.

While in language, “sky, lake, glow, thunder, air, water, mountain, and ground” can exist independently from one another, in the world, each force is unequivocally indivisible from the others. Where sky is also water, mountain is sensitive to ground; glow bounces off of lake while thunder lives in air. These forces, so alive in imaginations of nature and the world, can really only live singularly in words. Beyond language, they are knotted or entangled—two words invoked by curator Emily Lee.

In the exhibition text for Sky, Lake, Glow, Thunder, Air, Water, Mountain, and Ground, individual letters of the word “landscape” expand vertically into descriptive portraits of Lee’s childhood memories, sculpture, and her sensitivities to the natural world. The acrostic poem is a kind of sculpture in itself. A text-based landscape, the poem directs our attention across the page, down, and then across again. It is a shape that choreographs looking and asks us to acknowledge how form constructs meaning. A sculptor herself, Lee knows the potentialities of attending to the formal. Under the first A in “Landscape,” Lee calls on activation and objecthood, noting that “activation’s beginning and end is another matter of labeling.” They explain that the objects surrounding us—those which make up the architectures of our daily lives—are always activated, whether we know this or not. The very anticipation of future use grants objects with presence, where the possibility of activation charges the material with inertia on the brink of movement. By labeling an object a “sculpture,” the “state of un-” becomes glaringly apparent and the unused, unrealized, and unactivated is animated by what we expect to learn from Art. Sculptures are merely objects we acknowledge as choreographers, as they are forms we have already accepted have influence on our bodies and perceptions of the world.

Lee’s sculptural sensibility seems to permeate in whatever medium they choose to work in and continues into their curatorial exploits. While the exhibition ostensibly takes on themes of “landscape,” it formally works to challenge those constructions. When we know “nature” and “wilderness” to be built environments, whether literally or in the public imagination, they, too, become sculptural. These hyper-naturalized forms impact how we understand and move through the world. Burns’ installation presents as a literal built environment for an audience to orient their bodies around, climb on top of, and at times, keep a respectful distance from (if and when the space is being activated). Simultaneously, we watch images of other built environments on the screens, although we may feel more resistance to acknowledging them as such. Performers are invited to interpret the sculpture however they feel moved to do so, resulting in a space that is sensitive and responds to its activators.

All the Sudden is intimately embedded in these conditions. As the force behind the DIY space, Lee does not shy away from the seemingly minute, insignificant, or unsightly elements of the art space. They are committed to making visible what is too often invisible in exhibition settings (labor, install, planning). All the Sudden is a warehouse in the backyard of Lee’s home, which is always visible from inside the space; outlets and cords are available to the eye, as well as the portable toilet that Lee pays a monthly fee to maintain and make accessible for visitors. Essentially the “back-of-house” operations are as fundamental to All the Sudden as the art objects themselves. Or to quote Lee,

“There are so many factors that contribute to and fundamentally effect our ability to view and to see something. Exhibition spaces seem obligated to conceal those practical infrastructures, but I’m interested in the possibility that the viewing experience might actually be richer when the work is formally in conversation with the environment it’s shown in, with all the unseen laboring forces that facilitate the viewing. It’s an ecological and feminist approach to the notion of site specific exhibitions.”

Sky, Lake, Glow, Thunder, Air, Water, Mountain, and Ground will close on Wednesday, December 21st, 2022. In its final hours at All the Sudden, Burns’ installation will again be animated and interpreted by performances, music, and poetry. If you are in or around Austin, you won’t want to miss it.

Authors Macaella Gray and Zoe Roden share a collaborative writing and research practice and are based in Austin, Texas.