Under the Rug: An Interview with Nuveen Barwari and Lilly Saywitz

Nuveen: According to my “good friend” Merriam Webster the definition of ‘sweep (something) under the rug’, means to hide (something that is illegal, embarrassing, or wrong). You know when someone comes into the studio and they end up talking about that one piece that is “swept under the rug”? Well, that is the approach I plan on taking as I visit studios virtually and in person throughout the south for this “under the rug” series. 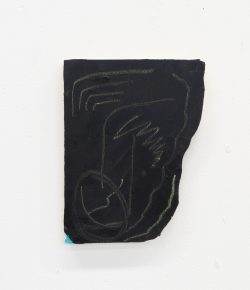 Night Move, Oil on Board

Lilly Saywitz: So, like do you want me to do a formal introduction?

LS: My name is Lilly Saywitz, I grew up in the suburbs just outside of Chicago, then I moved to Boston and I received my B.F.A from Boston university in 2016. Then I entered the MFA program at the University of Tennessee in Knoxville, and I will graduate this May in 2021 which is pretty exciting and scary. I want to start this experience off totally transparent you know. If we are talking about things being swept under the rug, I want to sort of buck against that. I really want the things in this talk to be as if we were together in the studio which is why I am going to start by showing you everything that I did this morning. So, I started this painting, it’s about 5 feet by 6 feet maybe a little shorter. When I am in the studio, I measure things like, “is it as wide as my arm span? Is it as tall as me?” If I can wrap my arms around it, I can move it then that’s a good size. It’s silly metrics but feels true to me. I was thinking about how I didn’t really enter this painting this morning with any kind of mood or objective I sort of just picked colors at random and let the marks take me to places.

NB: How long did this take? (something I usually do not like asking)

LS: This was all done in the span of an hour and a half. I have been really into my Fitbit recently which is such a funny thing, but my mom got it for me for my birthday.  I really love trying to hit the goal of 10,000 steps every day.  I looked down at my watch and realized that I walked a mile in my studio in this hour and a half constructing this painting. That was so stunning to me … that the act of painting is both a walking movement and a brushing movement… it’s such an active bodily process for me. The idea that even when I am working, I am still pacing, and I am still moving felt very revelatory to me this morning. I thought I had to share that; I walked a mile to make this painting… seems like such a weird/ poetic sentiment.

L.S: I recently finished reading Adrienne Baree brown’s, Emergent Strategies which is an amazing book. She’s an incredible thinker, word smith and poet and just all-around interesting person. One of the quotes that I took away from that book was, “What is easy is sustainable”. I think a lot of times we think about this artist studio we have this romantic notion that it is this argouse struggle at all times and certainly it is but the more I get comfortable with my studio practice and the way that I work the more that quote seems to come to mind as in ways in which I can create a system that encourages an ease of process and entering a flow state … ways to make this difficult challenge I have given myself easy, sustainable and fruitful.

NB: Just from following you on Instagram I have noticed that you document and post photos of these paintings and how much they change on your story throughout just one day… how important is it to document these changes? 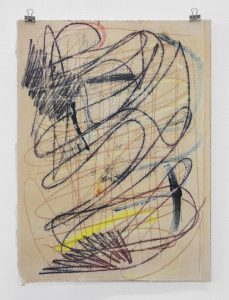 LS: I think the medium of the camera allows me to sort of separate myself from the bodily action of making the painting. If I take a picture it is either at a moment of rest where I need some separation. I need to look at it on a smaller screen just so I can see the whole image. I have to get a lot of distance between me and the painting to really observe it but looking at it small makes it more manageable. These paintings go through so many points of resolution that I kind of pace them at every point where I feel like there’s a sense of resolve or a sense of cogency. I take the picture then I reassess then I kind of go back in and attack. I feel like my process of painting is like both a very empathetic thing, like a conversation between me and the object. It’s like we are both walking and talking with each other but also, I have a bit of an attack and retreat in me, so it’s like both a communicative process and then kind of like a brutal process.

NB: What is an example of this “resolution” you speak of?

LS: This painting for me has reached a point of resolution, something about the curve, and the color composition it just feels like it’s been holding its breath for a long time and its exhaling. I think the paintings work best when there’s a sense of release of energy or tension. 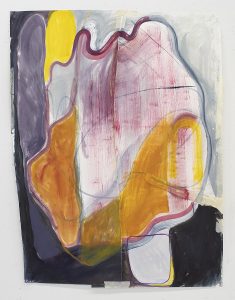 The Map I Made for Myself, Oil, Charcoal, and Tape on Paper

NB: Shapes and colors shift across medium in your work, through collage, printmaking, scale and painting.

LS: Again, if I am thinking about that quote, “what is easy is sustainable”, often time the colors will move from one painting to the next. Either because I am obsessed with that hot pink or because I have some left on the palette. I hate wasting paint because it is such an expensive material. I will try to scourge it into the next thing the best I can or put it on knowing it will get covered up in a couple of days. But that sort of glow from underneath will rise through into the new surface.

NB: I think a lot about the community of objects in my studio and my making process… I will be working on multiple things at one time that may require different modes of making but are all from the same community. I see that in your process too.  Especially with the different scales of paintings you have going at once.

LS: They all kind of exist in the same world. I’ll often have one or two large paintings on the walls and multiple small ones because I like to think about them as being in conversation with each other. Maybe one thing will change on this large painting and all of a sudden that creates an opening in another one. So, I like to keep my palette constantly wet just in case somebody has picked up on a little bit of a conversation with somebody else. As the day goes by, things will happen and change organically so I try to keep as many surfaces up on the wall. I think that teaches me a lot about failure because some of these paintings are such bummers ha-ha… their such fights to get to this final place and they all have 10 paintings underneath them. 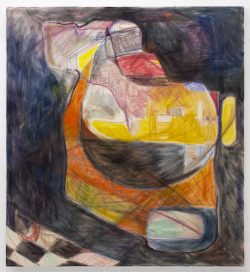 NB: Can you tell me a little bit about what you have been working on?

LS: In this body of work that I am making right now which is building towards the culmination of my graduate degree, my thesis show. I am thinking a lot about the idea of the heterotopic spaces rounded in reality… a space that is both grounded in reality but also a doorway into the spiritual or the experiential… like a graveyard per say. The graveyard is a real place, but it holds so much spiritual significance and these shapes like doorways and tombstones, arches and architecture are both these real sturdy things, but also have so many impossibilities and possibilities all held in such flimsy structure. I am always thinking about building the structure and breaking it. Creating this arc and the illusion of this dark space behind it then placing another material on top that reminds you that this is just goop on surface. There’s obviously two variant degrees of success or failures which is kind of like how it goes. 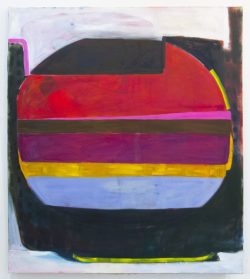 Red Sun Over, Oil on Canvas

NB: Do you ever feel bad about covering some paintings up? Also, what about failure?

LS: Maybe I don’t necessarily believe in the failure of a painting. I think I go into the studio every once in a while, and I say, “oh I really killed that painting today”, then I arrive the next day and I look at it and I think how I can bring this back to life. So, nothing is truly ever dead and gone. Maybe sometimes I feel remorse that I covered up something that I liked but I think that is the beauty of oil paint especially that, that ephemera always exists you know? That old thing can always become something new. I think that’s something that we share in our practices… a sense of constant becoming, constant change.

Lilly’s show, Back Into My Lovers Arm will open March 15- 22nd, 2021 at the Ewing Gallery at the University of Tennessee, Knoxville.

Lilly Saywitz is an abstract painter and printmaker located in Knoxville, TN. Saywitz makes large scale compositions that deal with themes of communication and the deconstruction of letterforms to shape, color, and line. Her work hovers at the crux of intent and indecent and embraces intuitive mark making as a site for the creation of new empathetic painterly language. She received a BFA from Boston University in 2016. Saywitz has exhibited at Gallery 263 (MA), Dorchester Art Project (MA), ZG Gallery (IL), Gallery 1010 (TN), and 333 Arts Chiyoda (Tokyo). She was the curator of an artist exchange between the MFA programs at the University of Arkansas and the University of Tennessee and holds a position on the UT School of Art Graduate Programming Committee. Saywitz is the recipient of the Graduate Excellence award from the University of Tennessee and received a spring 2021 scholarship from the Marco Institute for Medieval and Renaissance Studies. In 2022 she will travel to Lisbon, Portugal as part of the Zaratan Contemporary AIR program. She is a Graduate Teaching Associate at the University of Tennessee and an MFA candidate in Painting & Drawing.

Nuveen Barwari’s art is influenced by her family histories, being born in the U.S in 1995., and spending her adolescent years in Duhok, Kurdistan. She completed a Bachelor of Science in Studio Art from Tennessee State University in 2019 and is a 2022 MFA candidate at the University of Tennessee Knoxville. Often referencing Kurdish history, her work explores the fictive and nonfictive space between the homeland and the host land. A space that can be translated through repurposed mixed media that draws connections to U.S commodity culture, the mise-en-scéne of bazaars, globalization, and colonial amnesia. Barwari’s expansive practice includes installations; the deconstruction of materials into performances; co-hosting a podcast; collecting and repurposing artifacts from a larger community such as photos, rugs, fabrics, and Kurdish dresses; and an online shop that supplies apparel and art internationally.