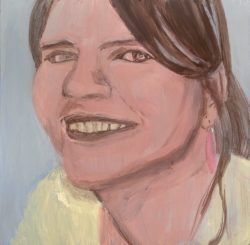 Nashville-based painter John Paul Kesling originally hails from Ashland, Kentucky — a small city in Eastern Kentucky in the foothills of the Appalachians. Ashland has a population of about 20,000 and only recently got its first Starbucks location. It’s part of the tri-state area that includes Ohio and West Virginia. The three states converge along the Ohio River in an region that’s now infamous as the epicenter of America’s opioid crisis.

Kesling returned to Kentucky over the weekend to show a display of paintings at The Jewel Art Gallery in Ashland. The exhibition consisted of a grid of small portraits of family members, friends and neighbors that the people of Ashland have lost to addiction and overdose — including the artist’s own brother. The scourge of overdose deaths has been haunting the area for decades, but in June it was announced that Kentucky shattered its previous record of overdose deaths, recording 2250 victims in 2021.

The artist joins Number for a Zoom chat from the Airbnb above The Jewel. Kesling traces the origins of the ongoing series, and illuminates the process behind his vividly-colored likenesses of these victims of America’s pharmacy industrial complex.