All images courtesy the artist and Parallelogram Gallery. 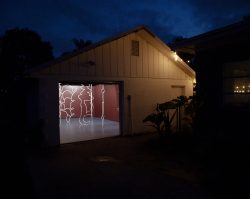 William Douglas: Road Runner, in its name implies an active engagement with a pathway. Each sculpture with its line directs us to a vertical journey from floor to ceiling or the reverse. When making these works how do you see the implied line movement in relationship to the mark making of cutting from a sheet of steel?

Dominique Labauvie: The history of sculpture during centuries has informed us that the title comes far after the appearance of the form. The form is predominant and that predominance in the sculpture comes from the material itself, which has a unique form and reality before any transformation. The single act to touch the materiality of things creates as Peter Schjeldahl writes in the New Yorker Magazine (March 9 2020; page 82) concerning the work of Donald Judd: The Shape of Things.

This means a very complex succession of gestures, emerging memories, mistakes, obsessions, and innovations, which are all inscribed within a timing of extremely dense actions. This installation is an application of my work to the wall. The compression of moments, subjects and ideas totally flat on the wall is parallel to how images were read from the prehistoric times through the middle ages: frontally. My goal is to build this work as a minimalist tribute to the mural narrative and to position the work for the viewer
so that they can intellectually and physically glide through the succession of this poetic narrative. The mobility of these two-dimensional sculptures, turning around themselves like the whirling dervish, creates the environment for the viewer to appropriate and continue the sequential stories within the third dimension.
The title Roadrunner reminds me of the presence of that little bird hunted by Wile E. Coyote, who is a ground bird, therefore running instead of flying, and in such a way he is running towards a utopic way to survive and the necessity to escape the hunter.
The reading of this installation, is connected with the sequences of the writing of its lines, or more precisely, with the vertigo of this writing. 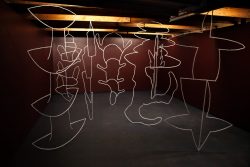 WD: Since the original planning of this exhibition our global situation has shifted in many directions. COVID-19 has shaped the world, George Floyd’s death and Black Lives Matter protests flooded the US and abroad, Samuel Paty was murdered in France, Biden and Harris won the US election, and most recently the Capital was attacked by Trump Supporters… amongst other things. Thinking back to the installation “Road Runner” that was installed, de-installed, to be reinstalled again a year later, do you think the works will deliver the same message that was intended during their creation?

DL: Roadrunner is a manifest about the flux of images that arrives and disappears continuously in our observatory plane (Kandinsky) with many interferences and connotations. It’s a juxtaposition of moments just like the juxtaposition of the events we discover each day on the news. The mix of frontal vision creates a sort of vertigo we need, just like the traffic created by thousands of people in a street, in a city or in a protest. This installation of Roadrunner corresponds to the invention of the creativity of the present and therefore it is in itself a political target. 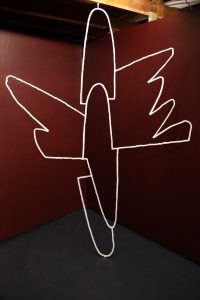 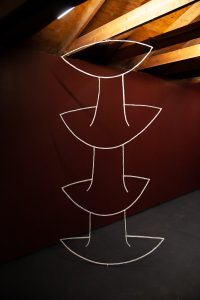 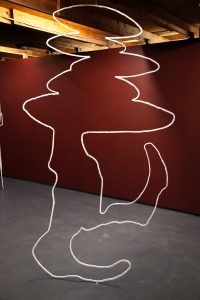 “The mix of frontal vision creates a sort of vertigo we need, just like the traffic created by thousands of people in a street, in a city, or in a protest. This installation of Roadrunner corresponds to the invention of the creativity of the present and therefore it is in itself a political target.” 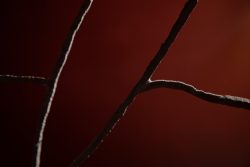 WD: I think of your cuts as an action on a larger piece of material and how that steel has provided a pathway through your studio practice from Europe to the United States . I envision your hand movement across a sheet of steel in Paris, to each cut in Tampa coming before or after one another as a progression to the installation at Parallelogram Gallery.  It is an installation in a garage where humans park our vehicles, an end of the road or a starting line for our days.

DL: Your question is essential and with it we enter into the constant editing of our present reality that we need to survive and to exist. It’s the movement of each person toward the creation of one’s life.
Just like a boat crossing the ocean, facing the huge surface of water using the maritime map of currents and winds, or, just like reading and writing a text, word after word, we create movement. “Jeder mensch, ein Kunstler”, said Beuys, Each person is an artist. Creativity belongs to everyone who has understood that.
Parallelogram Gallery is an American garage. To drive or to ride was always and is always part of the American way of life and now it is the place to invent once again the American dream. 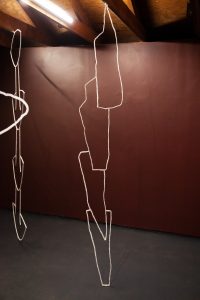 WD: I find the phrase “To drive or to ride” to be interesting way to look at this installation. The “American dream” is something that is constantly unpacked or attacked in contemporary art. Some times more subtly than others. Beuys and Judd are two artists that come up in conversation with you and I frequently. I see their influence on your ideas of “that dream” specifically in your ability to stay fresh in your critique of this country even after many years of living here. I think you are the driver in the Road Runner installation and we as the observers are allowed to ride with you…. The walls in the installation are painted in a deep red. Can you speak to that color and its importance to the exhibition as a whole.

DL: The deep red, the white and the colors worn by the visitors erase the materiality of what we see and introduce us immediately into a strange carrousel: we enter in a flux of time inhabited by diverse perceptions of forms.
The deep red escorts us onto the stage of an essential inventory as something has happened here in this space; the white of the forms appear and they create the light, they cut into the red to write the narrative in different languages and they move. Nothing is stable as we enter into the magic forest of Fanghorn.
Each of us becomes inhabited with a continuous flow of perceptions, just like in an artist’s atelier. The artist dances with them in very delicious moments.
I wanted to share this with you.

WD: You speak often about the work as being a forest. I absolutely experience this forest in the space, and I also feel that this installation is an evolving forest. Road Runner is evolving due to the physical fact that the sculptures are able to rotate upon themselves. In addition, the experienced peripheral vision activates your main focus on any specific line of concentration. This perceptual experience is at first quiet but then becomes highly stimulating when moving through the forest, thus making the viewer focus in on the specific lines that make up each object in the space. I find that specific concept then shifts my understanding of the installation to be about drawing in space. Specifically, when we look at the chalk like pigment applied to the surfaces, our vision is pulled through its transparency to the steel, which reinforces the nature of the handmade fabrication of each line. At what point does a work like Road Runner turn from a work that would or could exist on paper to a piece that must be made into a sculpture or a full installation and vice versa? 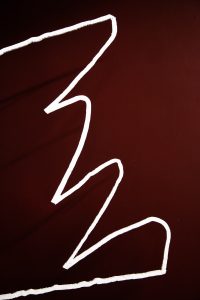 DL: The rotation engages the process of viewing the specific sculptures from two- dimensional to three-dimensional (thinking about la selette: the classical turntable of the stone sculptor). The two-dimensional sculptures, the bas-reliefs of the past create with the wall and the movement of the observing visitor, a third dimension. The third dimension is invented through the creativity of the viewer. Drawing is an integral part of the work. Whether I draw on paper or draw with my lines
of steel.

Dominique Labauvie (French b.1948) lives and works in Tampa, Florida. In 1985 he had his first one-man show at the Gallery Jordan in Paris, curated by Anne Tronche. In 1986, Dominique Labauvie received the Rome Prize from the Ministry of Foreign Affairs for Germany and spent one year working in Freiburg/Breisgau, Düsseldorf, Cologne and Berlin. Since 1977, Labauvie has received numerous commissions for Public Sculptures in Europe and the United States. In 1986 Labauvie enters the Gallery Maeght in Paris. In 1997 he was commissioned by the City of Paris to create a monumental cast iron sculpture “Suspended Skyline” which is installed on the Quai de Seine at the entrance to the Park of the Villette. In 1999, he installed “Over the Cities” at the Vandenberg Airport in Tampa, commissioned by the Hillsborough Aviation Authority. In 2001 he was the subject of a retrospective exhibition of sculpture and drawings at the Coral Springs Museum in Florida. In 2009 Dominique Labauvie received the Gottlieb Foundation Award Grant in honor of his artistic achievement. In 2009, he had his first New York solo exhibition, “Turning Point” at Haim Chanin Fine Arts. In August of 2010, “Musical Lines in My Hand” opened at the new Tampa Museum of Art. In 2012, he has a solo show at the first edition of UNTITLED art fair in Miami Beach, in 2015 his artist book, Rock Wood Water Earth is presented at the E/AB Fair in New York. Opening in 2017, Material Catch at the Mindy Solomon Gallery in Miami and DIG at the MFA in St. Petersburg with a new direction in the sculpture. The MFA purchases the sculpture The Agora and commissions for November 2018 a sculptural installation for the Grand Hall.
His work has been exhibited all over Europe, Japan and the United States in galleries, museums and cultural venues. Dominique Labauvie’s work is included in major public and private collections, including: The BNY | Mellon Corporate Collection, Pittsburgh, PA, The National Collection of Contemporary Art, France; Regional Collections of Art of Alsace, Paris, Languedoc Roussillon, France; The Runnymeade Collection in San Francisco; The Boca Raton Museum of Art, Boca Raton, Florida; the Museum of Fine Arts in St. Petersburg, Florida; and The Tampa Museum of Art.