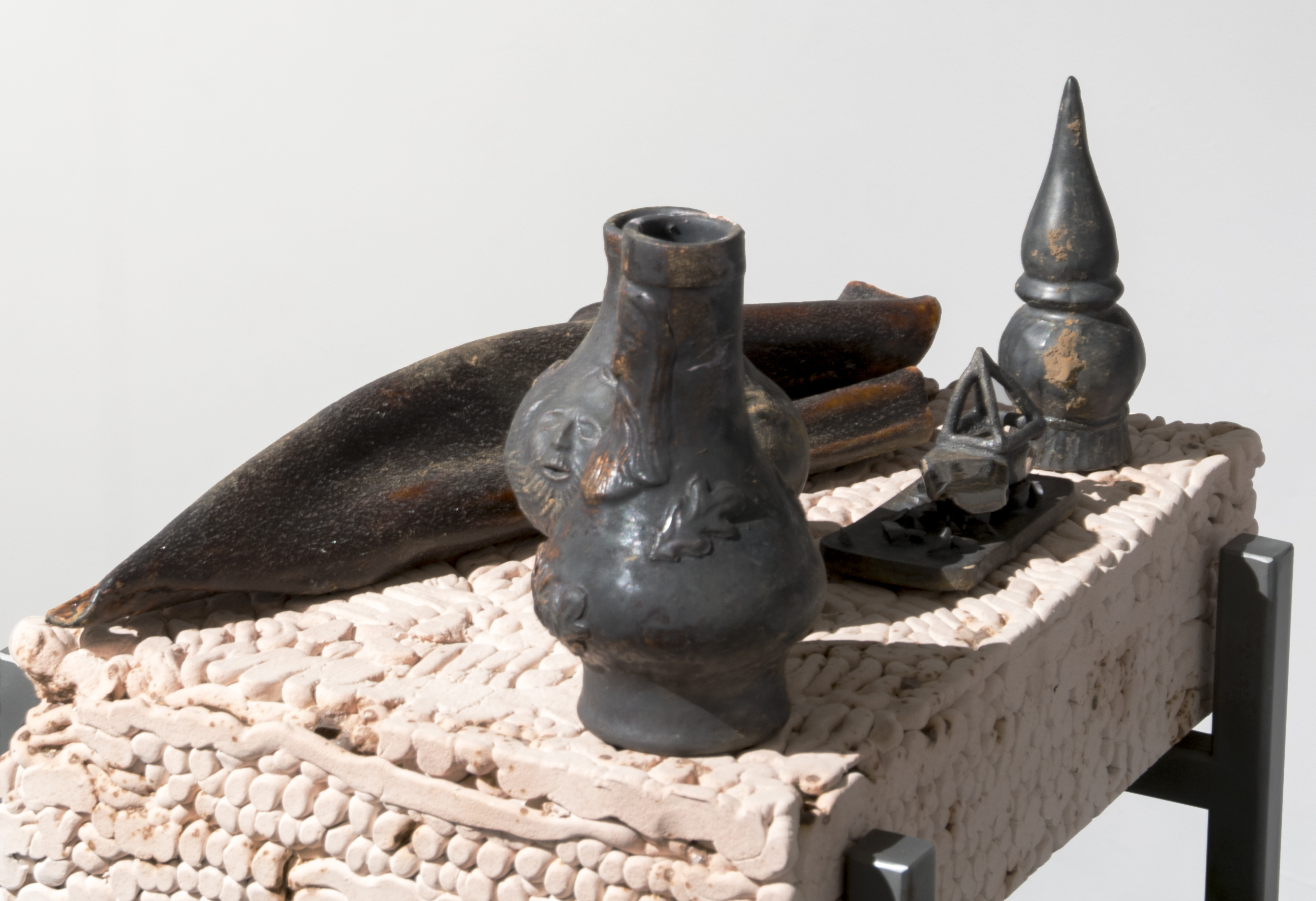 Witch Bottles, stoneware vessels used in 17th century England to place protective spells and block incantations of ill will, are complex relics that serve as both functional craft and decorative art object. When used to contain an ephemeral magic relic, the physicality of the bottle gives the elusive magic a material form. An analogy is the conch shell that holds a recording of the ocean’s spiraled waves, a potent aspect of the shell that can be heard but not touched. Similarly, the witch bottle gives form to the spoken words of the incantor once they are cast into a mix of excrement, fabric, metal, bone, wood or hair.

When an incantation is bound into a mix of space and material and concealed in earth or structure, it becomes a binding agent of sorts and, thus, is given a form of permanence. The incantation as an idea – held in this mix of things – supersedes the objecthood of the vessel in which it is contained. Its transformation through concealment, destruction, and ritual use lends the incantation – as a silent, affective intention – long-lasting power held in seemingly inert material.

Originally utilized to store ale during transportation and distribution, bellarmine witch bottles gained ritualistic function over time that far exceeded their original use. From the late 16th century through the 17th century, these salt-fired jugs imported from Rhineland were almost as ubiquitous as plastic water bottles are today.

The original, robust stoneware bottles depicted Bartmann, known as the bearded, or green, or gray, man of German folklore. In the 16th century they were renamed in response to their resemblance to Saint Robert Bellarmine, a despised Italian cardinal. In pottery, vessels have been described in terms of the body: a jug, or bottle, has a foot, a bottom, a belly, a shoulder, a hand(le), a neck, and a lip. Due to the reference to the body and association with Bellarmine, they proved to be an ideal vessel to hold a spell in reference to another’s body that represented a direct threat (a witch, a cardinal, a president). The ceramic material’s longevity insured that, once buried, the form would hold, protecting the incantation for the life of the afflicted.

Once prepared, a bottle was

securely corked or stoppered, and … then either concealed and left, or else heated until it explodes- with dire results to the witch who has cast the spell. In the former case it is believed the witch will suffer from strangury, and will be doomed to a slow and painful death, unless the bottle is uncorked. In the later more drastic method, the death of the witch and the subsequent relief of her victim are believed to take immediate effect, provided the bottle actually bursts. If the cork merely flies out, the witch will escape. 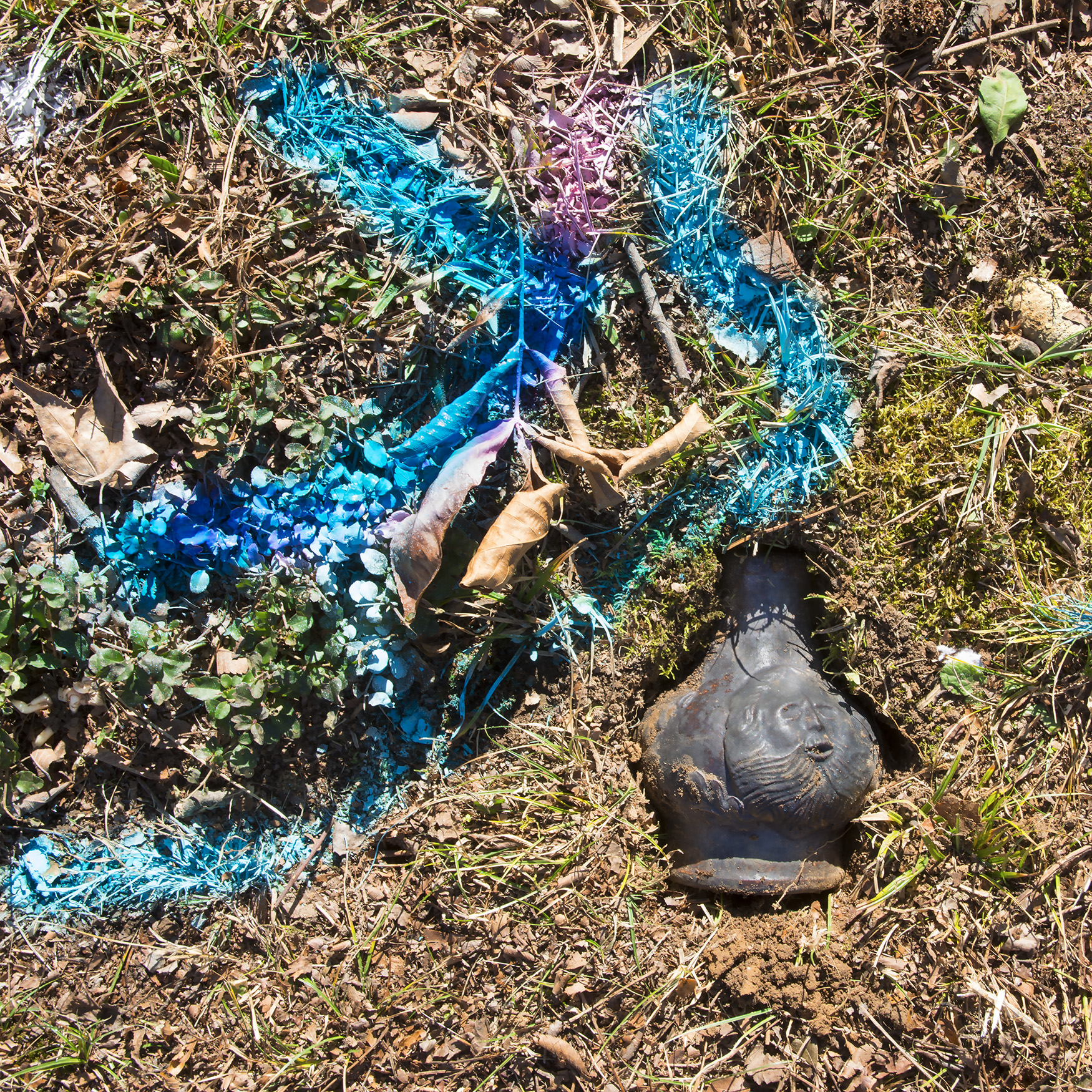 I came across the Bellarmine witch bottles by chance while researching undeciphered, glyph-based languages like Rongorongo, Proto-Elamite, and Olmec. These alphabets are recorded on wood, fired clay, and carved stone, respectively, and each projects a power as objects free of the depicted language. There is a connection between these tablets (that cannot be read yet assert the power to preserve a culture’s knowledge in matter) and the buried, Bellarmine jugs that hold a protective spell over a victim or space over the course of time.  Such occurrence

draws attention to an efficacy of objects in excess of the human meanings, designs, or purposes they express or serve. Thing power may thus be a good starting point for thinking beyond the life-matter binary”… to express a… “materiality that is as much force entity, as much energy as matter, as much intensity as extension.

This power of relics, as sensed in witch bottles, conch shells, or tablets, is known in two ways: both as a fixed material form with a visual presence, a thingness, accepted by the culture, and as a force or energy hard to fully describe. One that is best felt. Ultimately it is that energy that gives us pause when they are rediscovered and revived as artifacts.

The basic idea here is this: The world of phenomena that we perceive with our senses is an amorphous stew behind which are concealed eternal, unchanging forms which we can perceive by means of the supersensory perspective of theory. The amorphous stew of phenomena (the ‘material world’) is an illusion, and reality, which can be discovered by means of theory, consists of the forms concealed behind this illusion (the ‘formal world’). 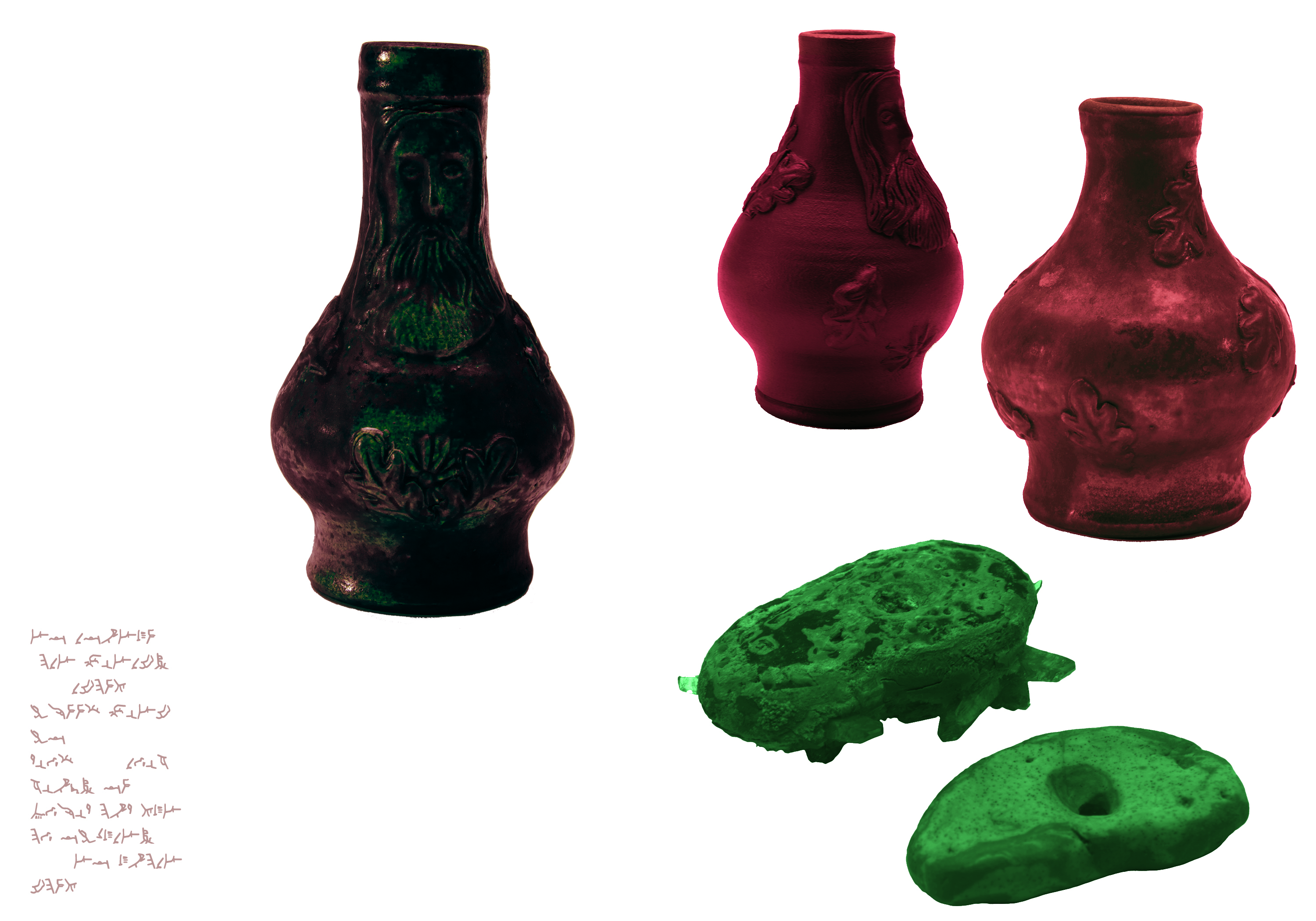 In 2017, following the inauguration the 45th President, I made a set of four Bellarmine bottles. At the time there was a lot of disbelief, fear, and outrage regarding what the election of this hateful anti-leader meant for the future of the United States. The act of making the bottles imbued my response toward the election and my wish to protect against him with a physical, material presence. The bottles have stayed with me, and I have worked to understand them in terms of sculpture and in terms of art objects. They were made, fired, and catalogued in Biography of an Unknown accompanied by glyphs reading “to counteract witch(’)s charm (:) burry with bodily clippings or fluid and met-al objects to enact harm”(f.2). They were then buried in performative use and excavated in order to return the site to its original state. Grounded within the history of witch bottles, the making of these bottles and my associated performances have anchored my vote of no confidence in a permanent, inert materiality and active materialized energy. At the very least, they are a timely, personal relic of resistance.